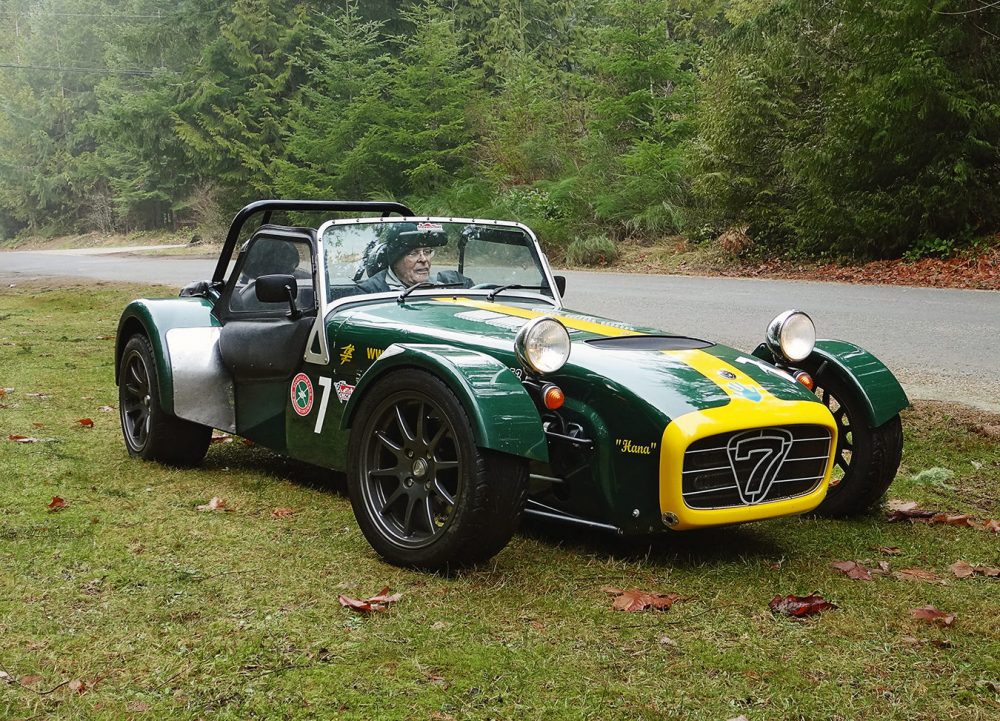 Of all the things to find in Chemainus, B.C., a bespoke automobile manufacturer is perhaps the least expected. This laid-back town is best known for the murals with which it painted a new future as a tourist destination following the collapse of the forest industry in the 1980s. Yet on the eastern edge of town, tucked behind a tall cypress hedge, sits the premises of Super 7 Cars, builders not simply of finely crafted bespoke sports cars, but of the quickest sports cars you can buy in Canada, for any price.

Genuine craftsmen work from the heart, and Super 7 Cars owner David Saville Peck is no exception. Born in Canterbury, England, Saville Peck started his career at a Bentley and Jaguar dealer before joining the British Army Royal Electrical and Mechanical Engineers, and then starting Ennerdale Engineering in 1965. He moved to Canada in 1972 to contest the CanAm series, but after being burnt in a serious racing accident several years after, Saville Peck set up a Lotus dealership in Duncan in 1976. Super 7 Cars was launched in 2000 out of a desire to build himself the ultimate sports car. His criteria were simple: “It had to be comfortable, and of course it had to be fast, and it had to handle well.”

He decided to build a special version of the Caterham Super 7, which traces its roots to the singularly successful Lotus 7 designed by Colin Chapman in 1957. This car would have a twist, however; it would be powered by a supercharged Suzuki Hayabusa motorcycle engine/gearbox, a lightweight wonder that with Saville Peck’s engineering expertise and fabrication skills would be tweaked to produce 200 horsepower.

Together with his son Jolyon, Saville Peck set about designing a drive unit that would allow the powerfully modified motorcycle engine to be mounted on the midline of the Caterham Super 7 chassis and connected to the car’s standard automotive differential, while also providing reverse gearing (motorcycles don’t have reverse). “We set a record in 2005 at Nanaimo Airport of 168 kilometres an hour, in reverse,” Saville Peck says.

Following the successful launch of the prototype car, Saville Peck and his son became the only authorized builders of Caterham cars for the Canadian market, and the worldwide supplier of left-hand-drive motorcycle-powered Caterham Super 7s.

Saville Peck now builds the cars with the help of technician Steve Lannon. Lannon does most of the assembly work, and there’s no production line or automation here. The cars sit on wooden stands at a comfortable working height, and Lannon shifts between a nearly complete white car in which he’s fitting the interior and a partially assembled red Hayabusa-powered car in which he’s completing installation of the differential, engine, and custom-made drive unit.

Not all cars get the custom drive unit, because Super 7 Cars also builds versions with car engines, like the white CSR 260 Cosworth-powered beauty Lannon is finishing. Need a ground-shaking sound system? Done. Carbon fibre fenders? Just say the word. Leather seating, uprated brakes—the sky’s the limit. But no matter how it is configured, each car is exquisitely detailed, a rolling work of art.

On the road, the Caterham Super 7 Hayabusa 1400 is a fantastical blend of sublime and outrageous. With its low stance and almost fully exposed wheels, one might imagine it would ride like a mining cart, but nothing could be further from the truth. On a chilly spring day, the heater in the test car keeps the cockpit toasty warm, and the suspension is surprisingly supple, even over speed bumps. The view along the hood, with the chromed headlight buckets reflecting the world back at you and the front wheels undulating independently over the pavement, is alone worth the price of admission. The engine burbles along and passersby wave and smile. Then you open the throttle and enter another dimension.

Less than three seconds after you crack the throttle, the supercharged car has slingshotted from 0 to 100 km/h, scrabbling for traction the entire time. If someone else is driving, the effect can be downright frightening, because it feels as if the car is itching to spin out or fly sideways off the road. But take the wheel yourself and you quickly realize the car isn’t out to axe-murder you at all—it is a responsive dance partner, letting you lead. Where you point, it instantly goes, and with only 550 kilograms of curb weight, it can change directions or stop in a heartbeat. It really is as if Saville Peck connected your brain directly into the car when he crafted the wiring harness, and it’s absolutely brilliant.