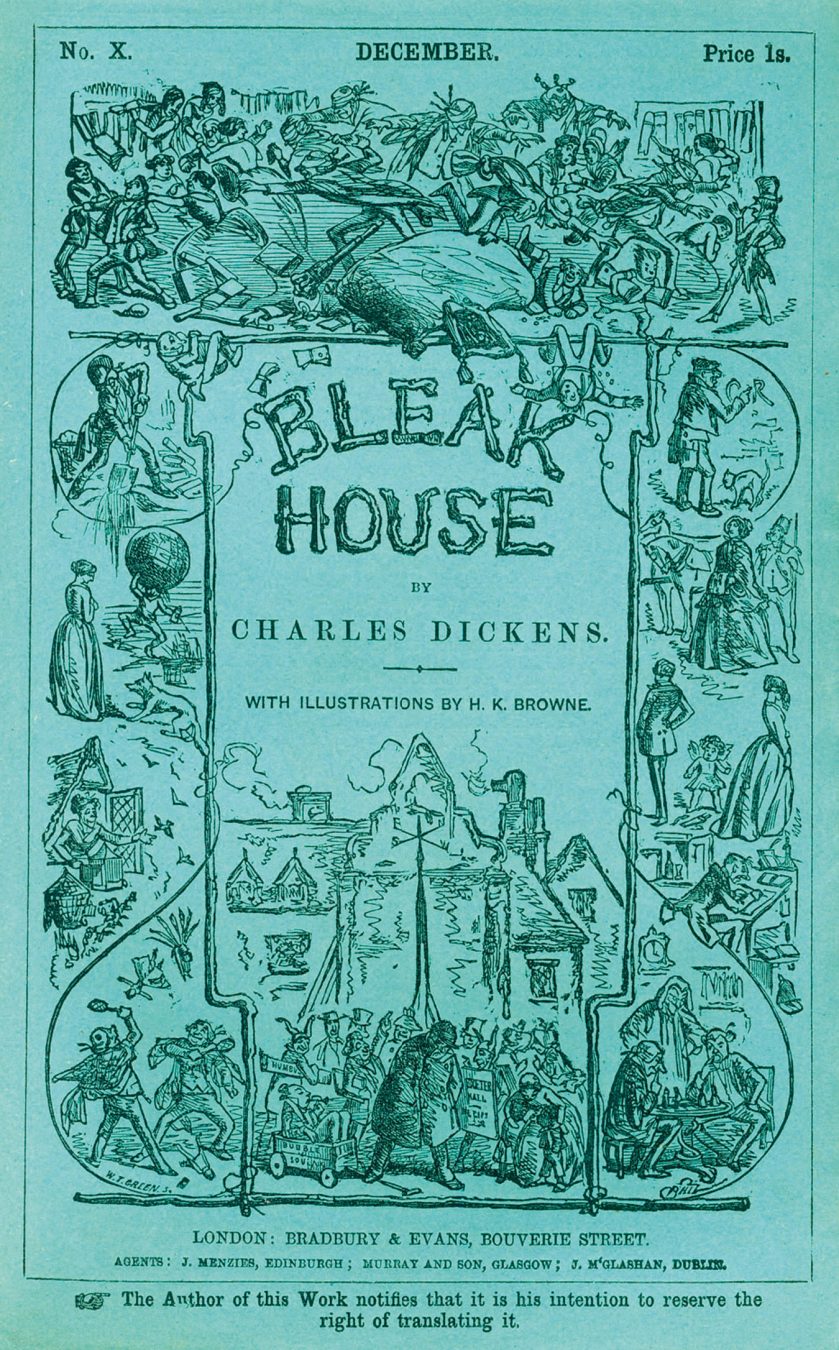 Where are the missing papers in the interminable lawsuit of Jarndyce and Jarndyce? What is Lady Dedlock hiding? Who killed Tulkinghorn, and why? And who, when all is said and done, will end up with whom?

We tend to think of the Victorian period in largely pejorative terms: prudishness, conformity, complacency, crassness. Yet the 19th century witnessed unprecedented social and technological change, with the accompanying loss of old touchstones. According to Britain’s 1851 census, Victorian England became the first society in history where the urban population outnumbered the rural. It was also the first to experience many now-familiar modern problems: industrial pollution; inadequate housing, transportation, and sanitation facilities; secularization, changing social roles, and crime, along with an increasing sense of fragmentation, isolation, and alienation—problems all encountered in Charles Dickens’ Bleak House, begun (both the writing and the action of the novel) in 1851.

This was also the year of London’s Great Exhibition, with its centrepiece, the Crystal Palace, a vast pavilion of iron and glass covering 21 acres, intended as a glittering beacon of the triumph of British civilization. London was literally the urban centre of the world, and it is the first word of Bleak House as well as its symbolic and thematic centre.

We tend to think of the Victorian period in largely pejorative terms: prudishness, conformity, complacency, crassness. Yet the 19th century witnessed unprecedented social and technological change, with the accompanying loss of old touchstones.

Dickens loved walking through the city, especially at night, loved climbing the dome of St Paul’s for a panoramic view, and his voracious sensory imagination absorbed and used all he encountered. “He describes London,” wrote contemporary Walter Bagehot, “like a special correspondent for posterity.” And against the stunning clarity of the Crystal Palace he set the celebrated opening of the novel, an impressionistic tour de force establishing the pervading atmosphere: late November fog, dampness, mud, and a claustrophobic maze of pestilential air surrounding the court of Chancery, where the Lord Chancellor, Britain’s highest legal official, presides over a labyrinthine bureaucracy, incompetent, indifferent, inert. Here languishes the Jarndyce estate. The Bleak House is a metaphor for this other London, as well as for the homes and the hearts of many of
its dutiful inhabitants.

Dickens’ creative imagination, of Shakespearean proportions, offers up a seemingly endless variety of characters, all individualized and functional, ranging from typically Dickensian caricatures, rendered through a luxurious indulgence in comic vocabulary, physical appearance, and mannerisms, to subtly rendered fraught, conflicted individuals. His inexhaustibly fertile language can catch precisely the tones, accents, and social registers of the full range of English society: the aristocrats Lord and Lady Dedlock, frozen in a sterile marriage; the benign John Jarndyce, with no interest in the outcome of the family case but acting as the guardian of Richard Carstone and Ada Clare, wards of the estate, and the employer of Esther Summerson, the novel’s admittedly saccharine heroine (supposedly an orphan) hired as a housekeeper and companion for Ada; the professional class, such as the sinister lawyer Tulkinghorn, intent on blackmail after witnessing Lady Dedlock’s shocked recognition of her former lover’s handwriting on a recent document (he along with the child they conceived presumed dead) and the astute, dexterous Inspector Bucket, one of the earliest instances of this new profession in English fiction, intent on justice; all the way down the social ladder to London’s working poor, such as Hawdon, a law clerk known as Nemo (Latin, “no one”) and Krook, the illiterate proprietor of a rag-and-bones shop with its surprising contents; and finally Jo, the crossing sweeper in the slum area known as Tom-all-Alone’s.

Dickens masterfully structures and paces the novel’s plots. He uses a double narration: a first-person account in the past tense by Esther, recalling the events of the novel after seven years have passed, and offering a sense of immediacy, emotional involvement, and reconciliation; and a detached, often ironic third-person narrator with a wider perspective, offering moral insights and judgements, whose use of the present tense suggests continuing disorder.

Bleak House begins with isolated and alienated individuals who gradually become connected in countless and unpredictable ways. There are integrative connections, the absence of which spawns destructive ones, for which contagious disease is the novel’s most potent metaphor.

And it is through Jo, the least socially significant of London’s inhabitants, that the various plots and characters coalesce—at a pauper’s grave in Tom-all-Alone’s in the heart of the great city. Jo is one of several characters in this story who are almost archetypal for Dickens, whose compassion for the maligned and discarded is nearly matched by his disdain for the evil-doers that populate virtually every single one of his 15 completed novels. They have, over time, become greater than the sum of their parts played, entering the social fabric in the author’s own time, but also earning an enduring place in the hearts and minds of readers today, informing modern life as much as past.

Don’t be put off by the length of Bleak House (roughly 900 pages, depending on the edition). A good novelist—and Dickens is one of the best, with Bleak House one of his best—can lure us into a teeming, complex, fictional world, with issues as fresh and pressing in our day as they were in his, and hold us, entranced.