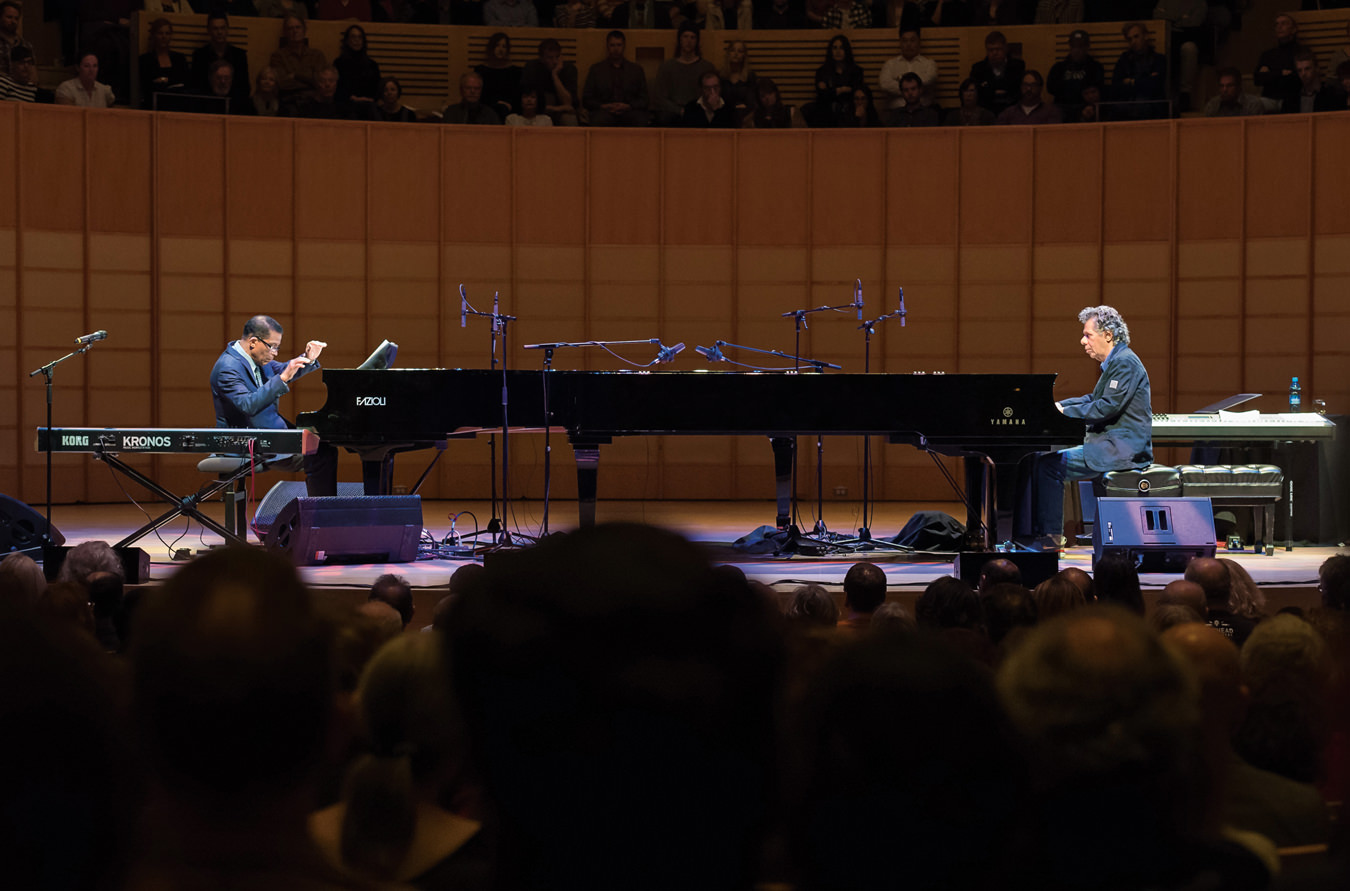 Jazz pianists Chick Corea and Herbie Hancock are touring as a duo for the first time in nearly 40 years and brought their world tour to the Chan Centre for the Performing Arts in March. The stage featured two nine-foot grand pianos pressed head-to-head in a yin/yang configuration, Hancock on a Fazioli and Corea on a Yamaha.

They played together like two old friends catching up, but this is no nostalgia tour. They could have just rested on their laurels, and they have an awful lot of laurels (just for a start, literally dozens of Grammy awards between them). Instead, the concert started with two new pieces. The second, by Corea, was the newly christened “Lineage”—and that could describe the underlying theme of the concert. The pair recounted how, in 1960, Hancock replaced the pianist in Mongo Santamaria’s band—none other than Corea himself. Full circle: in 1968, Corea replaced Hancock in Miles Davis’s band. Like many Miles Davis alumni, they both became important bandleaders in their own right. They also both continued to experiment with electronic instruments and what became known as fusion as a musical genre. This concert demonstrated how, after they each have been playing professionally for over 50 years, they continue to contribute, significantly, to the jazz tradition.

After “Lineage,” they played a spontaneous groove duet that Corea started with a rhythmic figure—like a New Orleans street beat—played on the top of the piano (he is also a very good drummer). Hancock displayed his formidable technique and profound musical inventiveness when he started an angular, chromatic, almost modernist improvisation. After a while, the music began to morph into of one of his most enduring tunes, “Maiden Voyage.” They never actually played the entire song, just alluded to it. Corea described their approach that night as “scraping beneath the surface.” Then they did a similar but more conventional version of Corea’s “Spain,” complete with audience participation. This was followed by Hancock’s soul-jazz classic “Cantaloupe Island.”

As a nod to their mentor, and keeping with the “lineage” theme, they played Miles Davis’s “Solar” as the encore. But again, it was so artfully done. They didn’t play the “head” and then do solos on the form and then play the head again. Instead, it was all seamlessly in and out of the form. At one point, Hancock played the pitches of the beginning of the melody in his right hand and then added the left hand in canon—almost like a fugue subject.

One cannot really tell whether they are improvising or reading—they are both such complete musicians. Also striking was their profound sense of harmony. They embellish even some of the harmonically sparse, modal tunes with interestingly rich chord interpolations and substitutions. Of course, this is never at the expense of the integrity or character of the tune itself. Sometimes they are playing and spontaneously decide to follow an idea; they complement, chase, comment musically, but never interrupt each other. There are no non-sequiturs, either—they are so full of ideas and musical joy that they never run out of things to play.