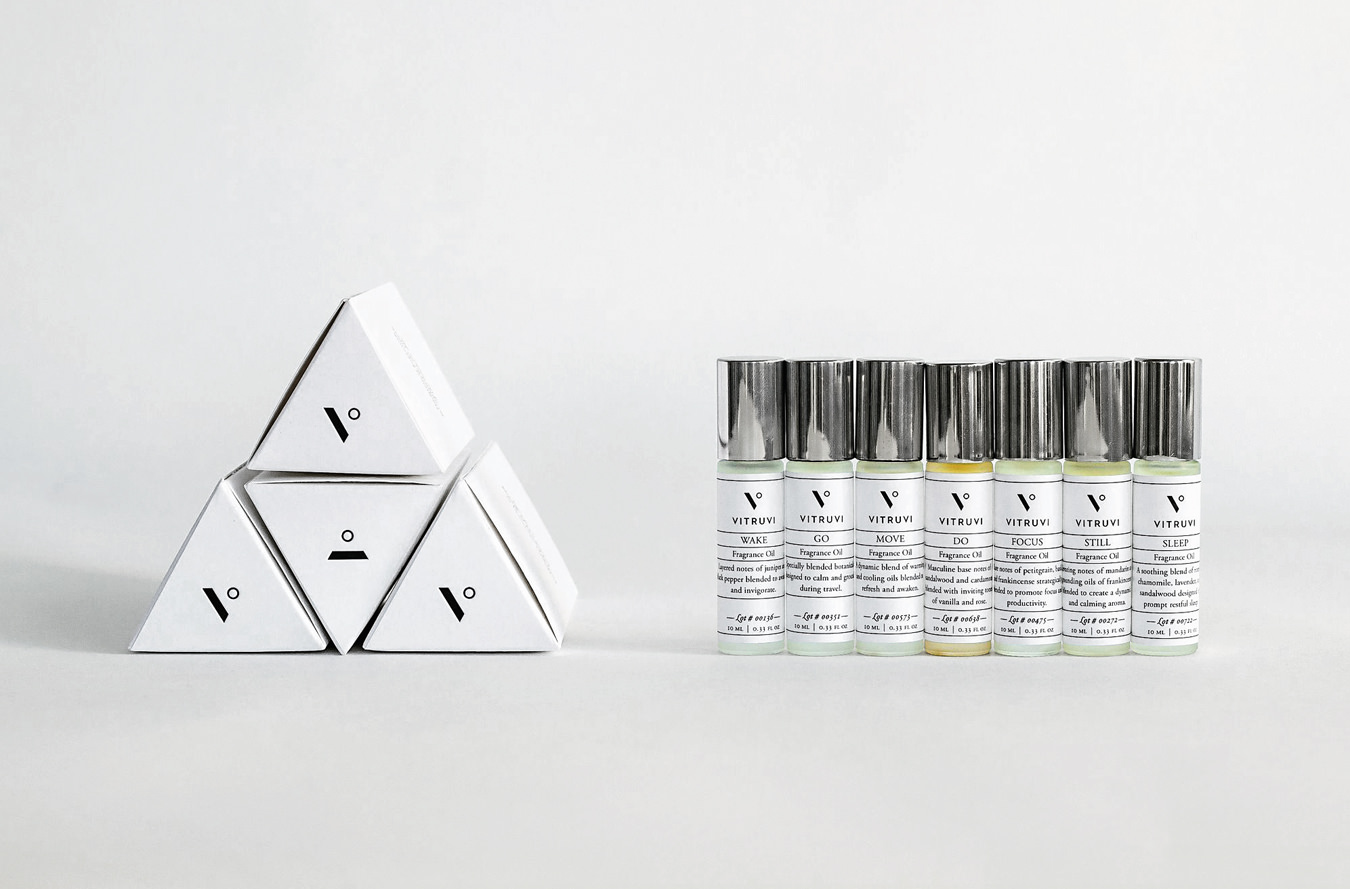 Sara Panton grew up buying herself a different fragrance on every birthday. Periods of her life became defined by these scents, like the Prada Amber Eau De Parfum Spray from 2006, or the Marc Jacobs Daisy she wore the year her grandmother died. Long after she retired a given perfume, she found her associations with its notes remained deeply ingrained in her psyche. Struck by scent’s chemical influence over one’s mindset, Panton decided to harness its power pragmatically. “Intentionality was our focus with Vitruvi,” she says decisively. Coming from a woman who abandoned a medical degree in preventative medicine to pursue a passion for the creation of scent blends, the statement is grounded in science. “I was sitting in class listening to a lecture on how our brain and body react to a scent before we’ve cognitively recognized it,” she explains of the switch. “Once inhaled, scent molecules instantly affect the limbic system—the brain’s mood and emotion centre.” (It sounds esoteric until you remember the last time you caught a whiff of a loved one’s perfume in an unexpected place.) Reconciling her emotional experience of scent with neural factuality, Panton took a year and a half to develop her Vancouver-based aromatherapy line with her brother, Sean, who holds a degree in business and entrepreneurship from BCIT. They launched Vitruvi in 2014 (named for first century Roman architect Marcus Vitruvius Pollio, whose Vitruvian triad theory held that design should have utility, functionality, and beauty); seeing the Victoria-born siblings together, poised and impeccable, is reminiscent of looking at a Ralph Lauren ad. Comprised of essential oil blends in roller-balled glass vials, Vitruvi capitalizes on smell’s ability to transcend logjams of mental preoccupation and alight on visceral associations.

Each oil has its function. The first, Wake, melds peppy juniper and eucalyptus essence and is best kept at bedside for an early morning sniff. Then there is Focus, with a rosemary-lemongrass-basil base, which arouses a mindset for getting down to work. And the cinnamon-vanilla notes of Do suit romantic moods. Choose which to use (Panton wears them successively throughout the day), and they’ll quickly form a handy mental association, priming the wearer to perform. It’s a useful trick, but there is even more to Vitruvi than olfactory stimuli. “I considered all these rituals, from tea ceremonies to burning sage to things like meditation and [traditional psychedelic drink] ayahuasca, and felt we lack very conscious practices in modern life,” Panton explains. “But there’s a need for them; people want to feel a sense of structure and purpose.” So there’s a softly spiritual side to the line—a click through the Vitruvi website reveals short essays on cleansing a space with smudge-wands and on the Japanese festival Dharuma Kuyo, a day of reflection and setting thoughtful goals. The concepts dovetail nicely; little personal rituals are grounding, and they allow for a sense of presence and awareness within hectic urban life.

Vitruvi is at the blending point of luxury and acuity: a beautiful, functional product made with ingredients carefully sourced from over 17 countries and sold in minimal white, angular packaging (“I see our identity as Vogue meets National Geographic,” says Panton). By pairing the psychological benefits of habit with scent’s evocative power, Vitruvi encourages one’s most effective self.