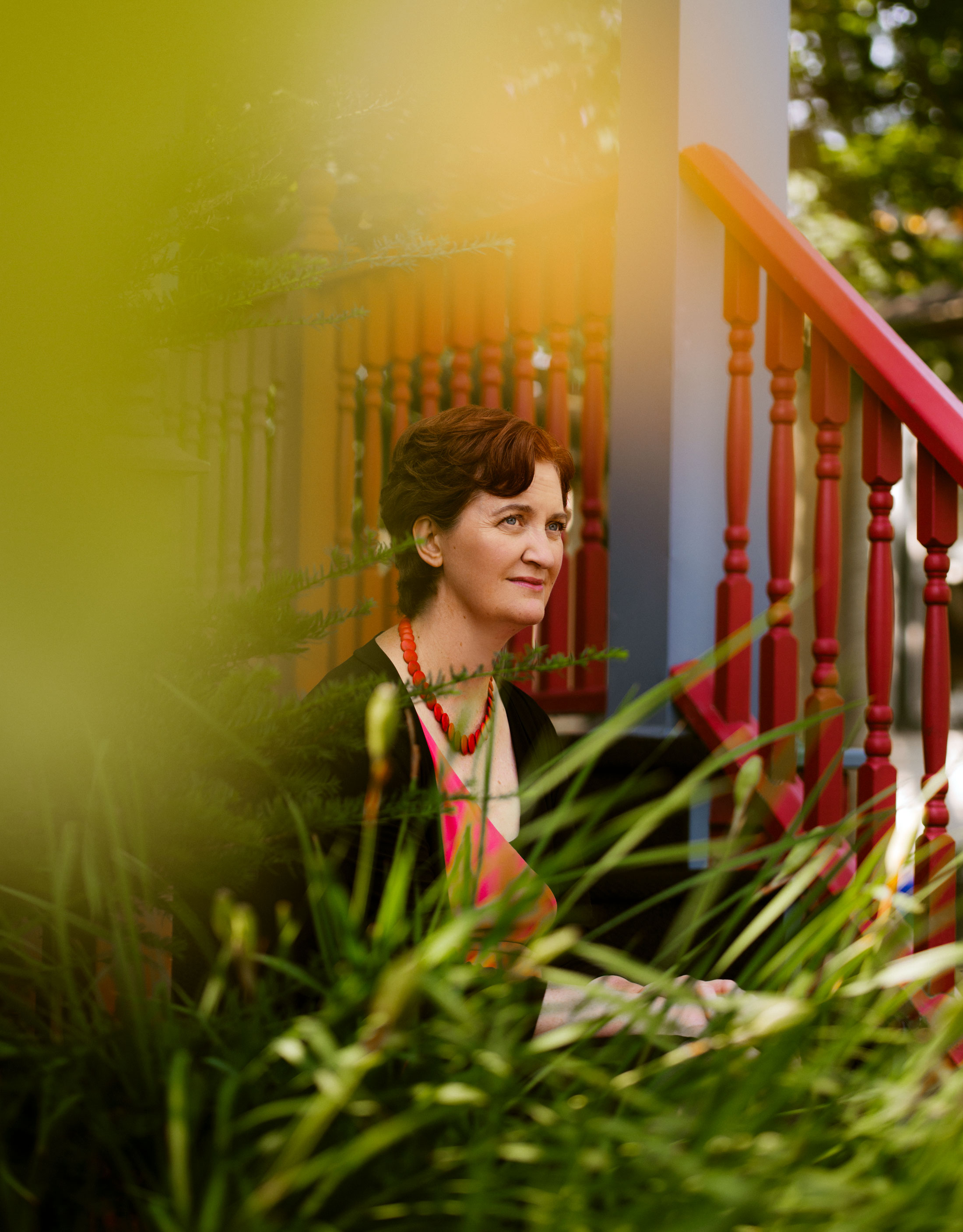 Emma Donoghue strides through the doorway of a busy café in London, Ontario, her crimson hair unmissable, eyes fixed on the display case where her usual lemon square should be. After a few moments of scrutinizing the absence, she capitulates. “I’ll just have the lemon cake,” she says. “And a glass of water.”

I’d expected her order to be more complex given her pedigree as an award-winning novelist, playwright, literary historian, and Academy Award–nominated screenwriter. But she seems to have resisted Hollywood stereotypes of celebrity and ego, easy as they’d be to indulge. (Our fellow patrons appear to recognize Donoghue as a familiar face they’ve seen parked at a neighbouring table, toiling away just like the rest of them.)

Wearing a sleeveless black dress and a commanding red stone necklace—a lone souvenir brought home from Brazil’s Rio Biennial years ago—she’s fresh from the photoshoot for this feature. In October, the Irish-born author will be a headliner at the Vancouver Writers Festival, promoting her 12th novel (and 16th book of fiction), Akin.

“I don’t mind it the occasional time,” she says of being photographed. “I’m not one of these introverted writers who hates attention.”

Donoghue’s cheeky charm and willingness to revel in the spotlight when necessary have proven handy in recent years. Her 2010 novel, Room, which sold over 2 million copies, was shortlisted for the prestigious Man Booker and Orange literary prizes, among others. After declining a steady stream of film studio offers that weren’t quite right, Donoghue finally adapted the book into a feature film that was nominated for four Oscars in 2016, including Best Adapted Screenplay and Best Actress, the latter won by Brie Larson for her role as a woman forced into captivity. (Larson thanked Donoghue in her acceptance speech.)

With Room not yet finished its journey—the North American premiere of its theatre adaptation is scheduled for March 2020—Donoghue is releasing her first contemporary novel for adults since its publication (in between, there have been historical novels, short stories, and children’s books). But despite having enjoyed a hit that exceeded expectations, another Oscar nod is not necessarily on her wish list.

“I’ve never hungered for red carpets,” she says. “Room could have been a terrible film if I hadn’t chosen the right people to make it. It could have been the worst combination of rape-y and sentimental. I couldn’t let that be done in my name.

“If I thought a story would be best as a film, I would write it as a screenplay,” she continues. “It would be perverse to use one art form to sneak up on another.”

She says she has half a dozen film and television projects in progress in addition to a queue of novels at various stages of completion. Her intentional over-employment across mediums is an important part of how she works—a means of staving off boredom and a guarantee that each idea benefits from breathing space while her attention is elsewhere. “That long gestation period gives me an opportunity to do a lot of research in a very relaxed way,” she explains. Plus, she enjoys working in capacities that allow her to relinquish total control: “You have all the power until the first draft is written. After that it’s a collaboration, an exchange. If you resist the input of others, you are going to have a very uncomfortable time. It wouldn’t be good for the work to try and control it.” (As one of several producers on the film version of Room, Donoghue says she leaned into the experience of abdication.)

To research Akin—which follows two seemingly incompatible travel companions to the French Riviera—Donoghue, along with her wife and two children, spent two full (though non-consecutive) years in Nice, France, where she meticulously recorded observations now stored in bulging digital files with labels such as “Trans-Atlantic flight” and “Anglophone names for French shops.” The writing itself was done at home in Ontario, in various hotel rooms, at the café in which we are currently sitting, and during long walks at a treadmill desk. “I’m not sure I could spend eight hours a day on it,” she says of the unorthodox office configuration. “If I’m writing a brand-new scene, I want to sit down for 100 per cent concentration.”

Donoghue grew up in Dublin, the youngest of eight children. Her first novel, Stir Fry, about a young Irishwoman coming to understand her sexuality, was a finalist for the 1994 Lambda Literary Award. “One reason I’m so productive is I’ve never had a hangover,” she notes. “I hate the taste of alcohol, which makes me a very odd Irishwoman.”

Though she works with great discipline, she has found a way to write methodically every day without her schedule becoming punishing; the guilt-free latitude she allows herself fuels her constant output.

“It’s dangerous to create magical thinking about the writing process,” she insists. “Because if one thing’s different or you can’t find your special pen, the whole mood is wrecked. So I try to be as unfussy as possible.

“I wrote my first novel at 19, and now I’m 49,” she notes. “I’ve learned to let my brain go where it likes. If I have a day where I’m feeling restless or I don’t feel like writing, I might just watch three episodes of Fleabag. I trust that I’m not lazy. I let my brain take holidays. My brain can behave eccentrically as long as I get my writing done.”

This dynamic between subordination and control is present not just in Donoghue’s approach as a writer, but in the characters she awakens during moments of surrender.

In Akin, she writes of an unlikely accord between two lonely men with decades of difference between them. “There’s always a moment when the one who thinks they’re the saviour is suddenly abased when they realize they’re doing it badly or that they themselves need saving,” she says, referring to her work at large. “I’m interested in setting up a pair of opposites and then undermining that binary.”

She relies on fastidious research as much as curiosity, trusting that new perspectives will reveal themselves through the process: “I really enjoyed getting to inhabit a scientist,” she says of Akin’s protagonist, Noah, an elderly widower who lives in a tony building on New York’s Upper West Side. “I tried to give him a very unsentimental world view. He knows that he will rot. Most of us try not to think about that.” To better understand the circumstances of Akin’s other lead character, Michael, an 11-year-old boy with nowhere to live, Donoghue spoke with social workers and dove into researching the realities of the American foster care and adoption systems.

“Even though I’m neither Noah nor Michael, it feels very personal to have walked the streets of Nice and to have hurt my feet on its pebbles,” she says.

I ask whether Donoghue considers herself sentimental. She credits her Irish upbringing with a temperament that allows her to show emotion sparingly—a character trait that benefits her writing in that she is able to take a step back. “I’m very interested in feeling,” she counters. “The challenge is how to make your reader feel something, without making them feel that they’re being prodded to feel something … I believe in giving the reader satisfactions which will make it worth their while to have felt along with your characters all this time. You’re always tinkering—a little bit of emotion, but don’t let it get too sappy.”

When a server reaches to clear our dishes, Donoghue opts to keep her plate and finish the crumbs of her lemon cake. Plate clean, she faux-sighs and announces her departure: “Okay,” she says. “I’ll go do some work.”

Emma Donoghue will be speaking as part of the Vancouver Writers Fest at Performance Works on Tuesday, Oct. 22 at 8 p.m. For tickets, visit writersfest.bc.ca.

Like this story? Read more from our Autumn 2019 issue.