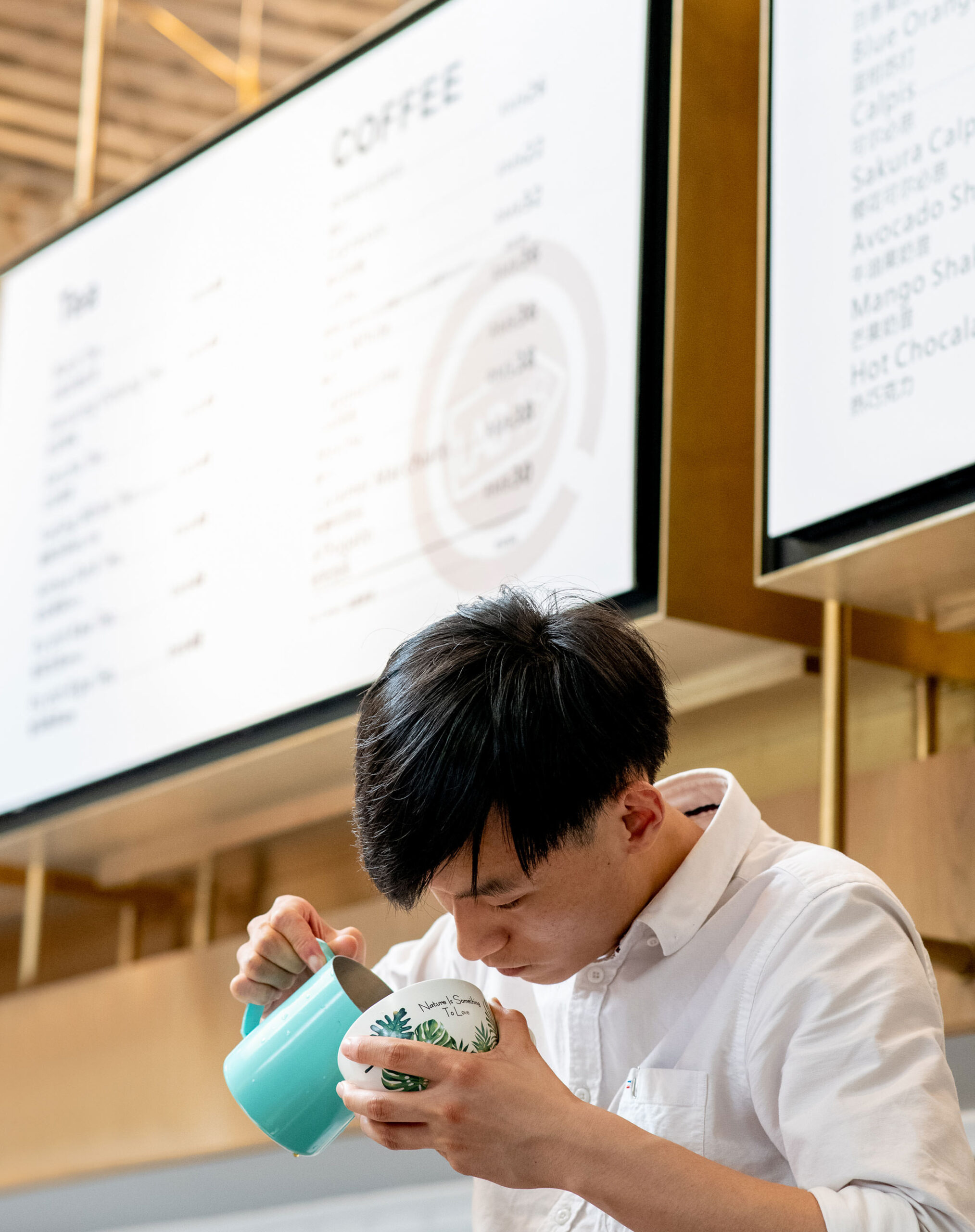 “Feng Yuxiang is dead.” Not in the literal sense—the Chinese general himself posted the sign outside his study. He didn’t like to be disturbed while reading, or perhaps he was planning his failed 1933 attempt to lead a volunteer army against the invading Japanese. After Feng moved out of the building, Chinese poet and activist Liu Yazi lived and worked here, at one point locking himself into his self-described “buried alive hut” during the 1937 Battle of Shanghai. Liu eventually fled Shanghai in 1940.

Built in 1926, this garden villa located in Shanghai’s former French Concession district is now home to Sinan Books (sister store to the London Review Bookshop, which has an outpost in Feng’s former basement study). Today, a young couple sprawls on a sofa, their noses in books. They barely glance up when a staff member from the second-floor café places a glass carafe of coffee on the table. I leave them alone in this quiet refuge, where leather tote bags, stationery, and other trinkets are also for sale, to check out the third-floor exhibition hall’s display on the 170th anniversary of The Communist Manifesto. 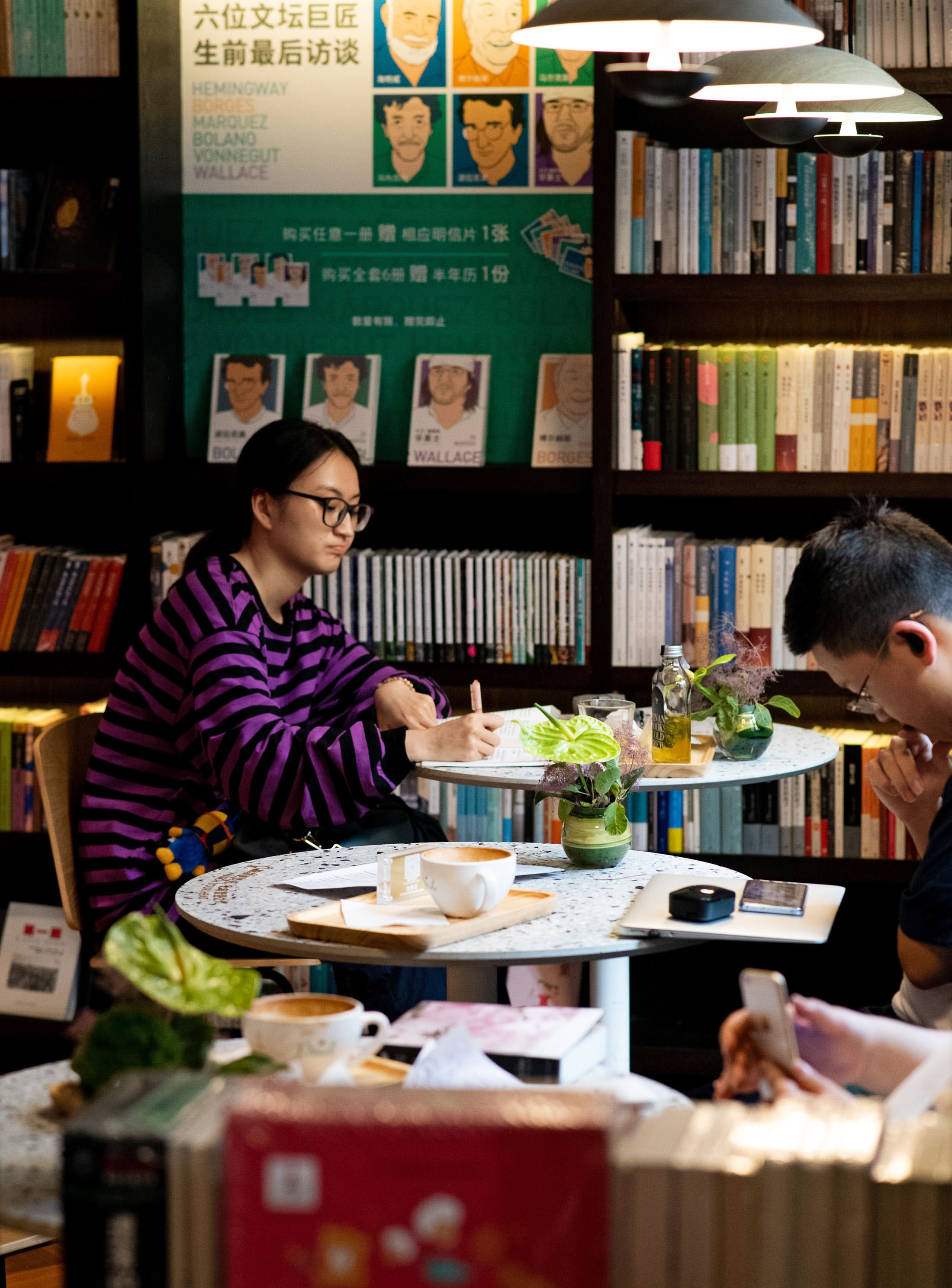 Coffee shops have proliferated in China’s megacities, including in Shanghai, serving the quotidian espressos, flat whites, and hand drips alongside Gibraltars, coconut-tinged cold brews, and red-velvet lattes. The country’s burgeoning middle class has also cultivated a taste for an emerging type of café culture found in places like Sinan Books. It’s one of a number of new concept stores where books, beverages, and mini MoMA-style boutiques chicly coexist. As this city of more than 25 million rockets into the future, such stores offer an interlude amid constant change.

Opened in 2018, Sinan Books occupies one of 51 European-style historical edifices—collectively called Sinan Mansions—built in the 1920s and ’30s. An upscale residential district where Shanghai’s elite lived alongside well-to-do European expats, many of its residents left during the Second Sino-Japanese War or after Shanghai’s liberation in 1949. According to one account, in the years that followed, masses of families and even Red Guards occupied Sinan’s buildings. Today, a signboard on the property simply says the mansions suffered from “long term ‘improper’ or ‘excessive’ use,” particularly in the 1980s. The buildings were rebuilt over the course of a decade, reopening as a public space in 2010.

Architects from local studio Wutopia Lab, who designed the three-storey (plus loft) store, say: “Considering one’s mind, thoughts, perception and sub-consciousness, Sinan Books is seen as a person with a system of acquiring knowledge while discovering oneself and the surroundings.” Sinan’s “no photos” policy encourages full immersion in the labyrinthine space.

Café culture, especially in the former French Concession, developed in Shanghai in the mid and late 1920s. It was modelled on the romanticized Parisian example, according to Laikwan Pang’s study, “The Collective Subjectivity of Chinese Intellectuals and Their Café Culture in Republican Shanghai.” Author and professor of cultural and religious studies at the Chinese University of Hong Kong, Pang says cafés were where “Chinese urbanites mimicked the new bourgeois lifestyle.” Young intellectuals and revolutionary literary groups such as the China League of Left-Wing Writers also met in Shanghai’s cafés, which “both condemned and celebrated pleasure.” Indeed, for the mostly male patrons, “a major visual pleasure of being in a café was to watch prostitutes and waitresses.”

Pang’s work also points to modern research showing “… young people nowadays still conceptualize coffee more as a cultural sign than a drink, and in the café they can publicly display their newly acquired taste and culture as modern world citizens.” She was writing about the mid-2000s, but that ethos still stands. These new gathering spots are sleek architectural showpieces designed to engage and entertain. For digital denizens, they might even be a subversive throwback to an analogue universe, one entwined with Shanghai’s tangled history. 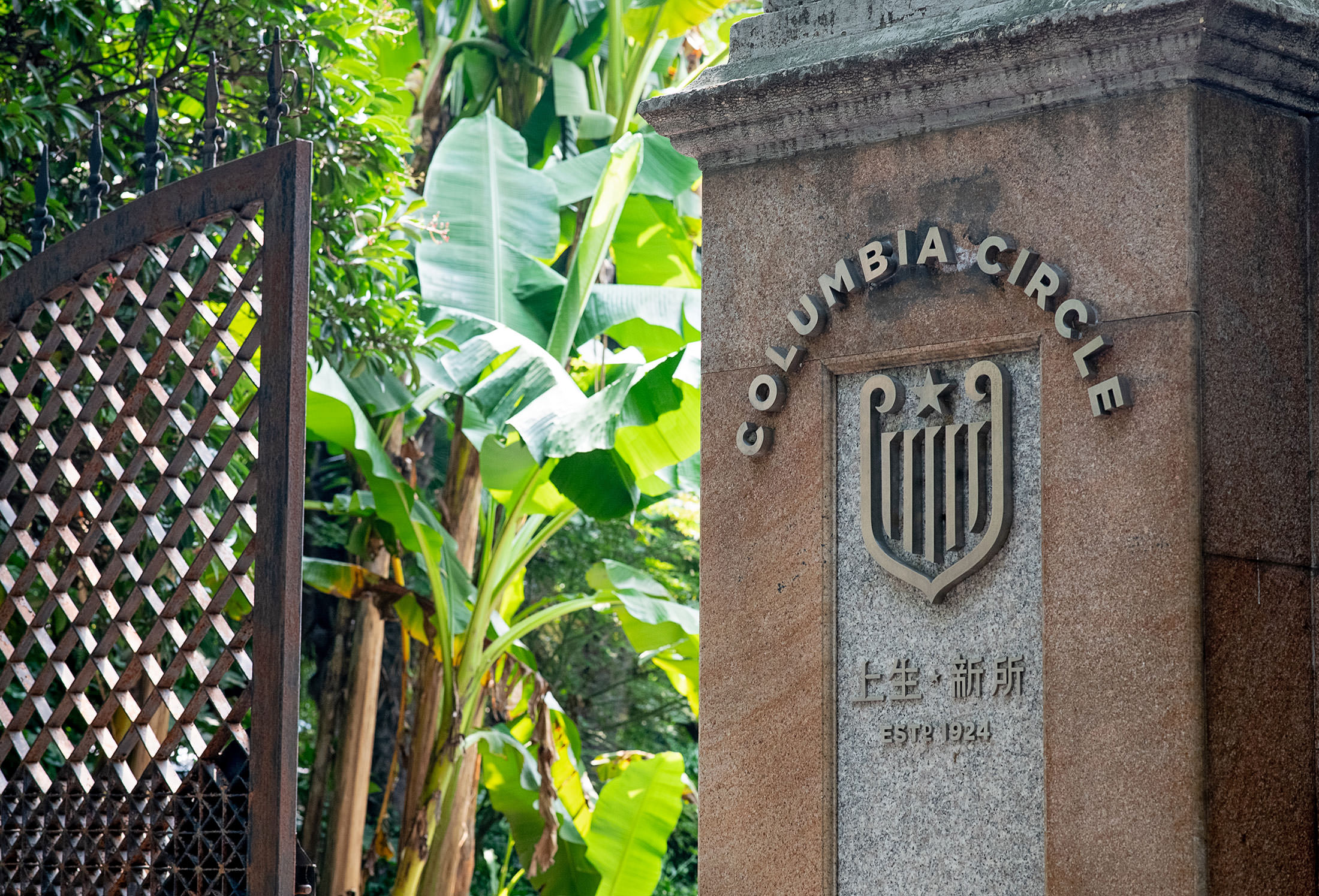 Revitalized by OMA designers and reopened in 2018, Columbia Circle is another Concession-era enclave that’s part of Shanghai’s fervent evolution. This Changning-district community was a playground of sorts for wealthy Americans in the 1920s and ’40s. At its heart is Dawn City Books, a two-level concept store with Scandi-style sensibilities.

The fragrance of magnolias hangs heavy in the sultry afternoon air when I drop by one Saturday in June. Dawn City’s stylish café, which serves single-origin coffee, high tea, and other fare, is brimming with parents and kids thumbing through books while eating and chatting. Locally made designer purses, elegant watches, and Dawn City–branded tea sets are displayed on shelves alongside travel, religion, and history books, plus magazines such as Wallpaper*, Cereal, and IDEAT. Everything is published in Chinese. I spy on people bent over tables tucked between bookshelves, engrossed in their reading and ignoring their lattes. They form still lifes captured in the sun’s amber glow, framed by a backdrop of picture windows.

The scene is vastly different outside Columbia Circle’s walls, where Changning’s chaotic sidewalks and alleys are de facto living rooms for Shanghai’s working class. As I stroll, I see meat being butchered and jovial men huddled around low tables playing cards and chain-smoking to the shrill soundtrack of cicadas in the camphor trees. A few blocks away, things morph again.

“A man can be destroyed but not defeated.” This Hemingway quote is inscribed on a plaque accompanying a gleaming gold-toned sculpture called Rough Life, an incongruous art piece for an area named Happiness Alley. Home to factories in the 1950s and ’60s, it’s now a slim cluster of high-end bars and restaurants, ice cream shops, patisseries, and glam venues like Nice to Meet You. Another new concept store, the space unfurls over three sun-lit levels, inside and out, bringing to mind an M.C. Escher drawing. It’s a mash-up of café and trendy women’s clothing and accessories store, with a massive selection of books and magazines. Many are in English, a rarity in Shanghai.

Cushions act as seats on a set of shallow stairs where couples cozy up, flanked by floor-to-ceiling shelves decked with titles from Bukowski to Plath. I order an Americano and join proud grandparents beaming over a baby and a trio of Gen Z girls on the top-floor balcony overlooking the action on Panyu Street. Down below, migrants with work-weary faces careen by on electric trikes precariously piled with salvaged cardboard, and city workers clad in sky-blue uniforms sweep the sidewalks with traditional bamboo brooms. It’s a blunt reminder that a 30 RMB ($6) Americano is a luxury that’s well out of reach for most Shanghai residents, at least for now.

Nice to Meet You is more hipster hub than historic hideaway. No famous folks lived here, posting signs about Feng Yuxiang or anyone else. But it’s undoubtedly a window into Shanghai’s new version of café culture—a place to press pause and indulge in some shopping, sipping, reading, and reflection in a city that’s perpetually in motion.