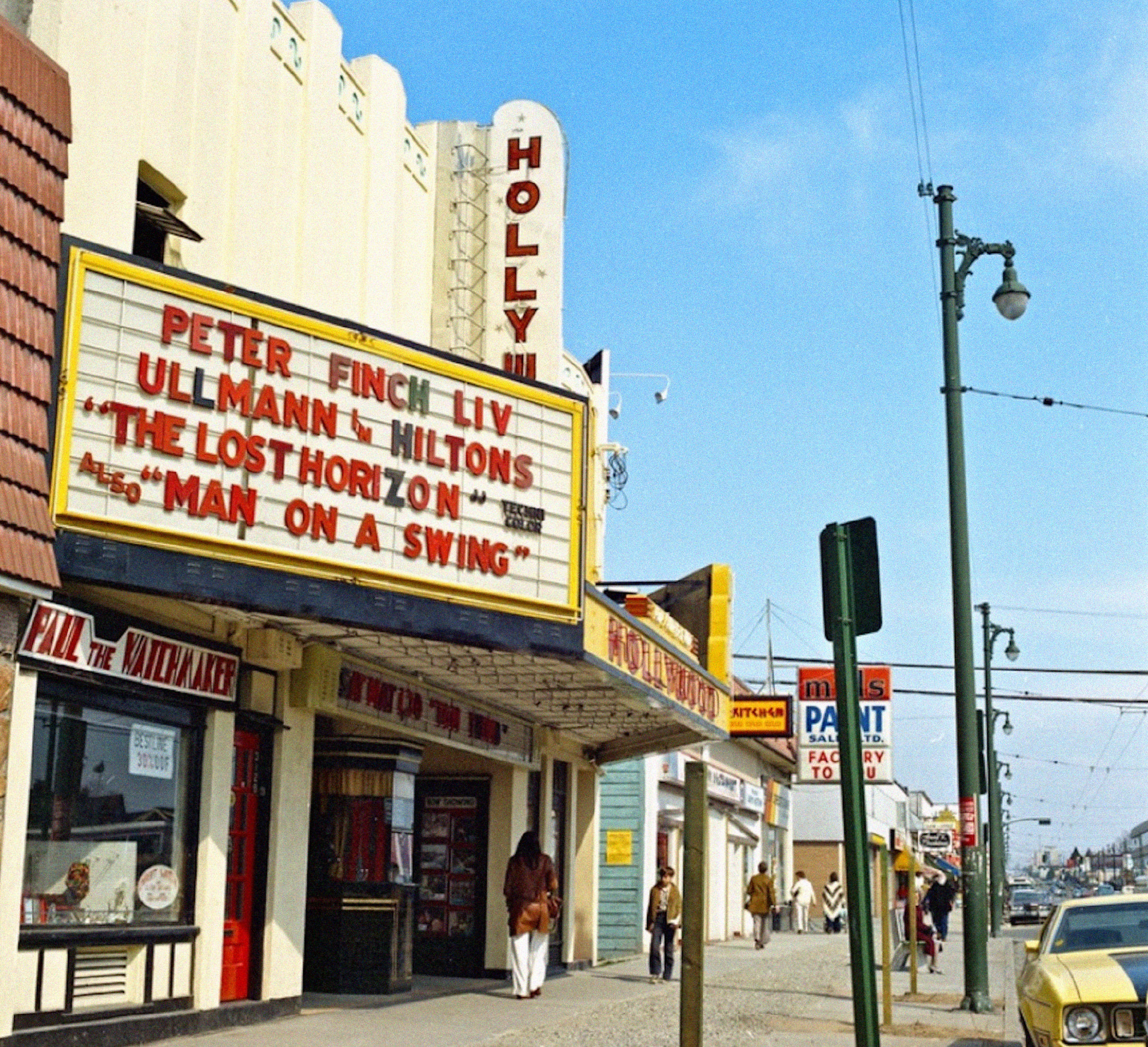 It’s June on West Broadway in Kitsilano, and every few minutes a passerby stops to admire the newly restored vertical neon sign for Hollywood Theatre. Many wonder if and when it is due to reopen after years of neglect (at the time of writing: this fall).

When the cinema opened in 1935, the neon sign was the first in Vancouver integrated into the structure of the building. Beneath, a smaller companion was emblazoned with the legend “Pick O’ the Best Plays,” a phrase redolent of the movies’ infancy when motion pictures were also known as photoplays.

Designed by architect Harold Cullerne in the sleek art deco style then in vogue, the theatre was owned by Reginald Fairleigh, a cinema technician who wanted a Depression-proof business he could hand over to his son David, then 19 years old. Seventy-six years later, the theatre had withstood not only the Depression but also the Second World War, the onslaught of TV, and video rental stores; David had passed the torch to his son David Jr., and he to his son Vince. Hollywood Theatre was the oldest family-run movie house in North America, but its days were numbered. After four generations, the Fairleighs’ strategy of discounted second-run titles and double bills wasn’t going to bankroll an expensive transition to digital projection, and in 2011, the cinema was forced to close its doors.

Plans to convert the space into a fitness centre drew fierce backlash from the community. Except for a brief church tenancy, the building has been empty, while, under sustained pressure from the Save the Hollywood campaign, the owner—developer Dino Bonnis—and the City hammered out a deal to guarantee its operation as a for-profit mixed-use arts facility in return for increased density in the adjoining apartment complex. 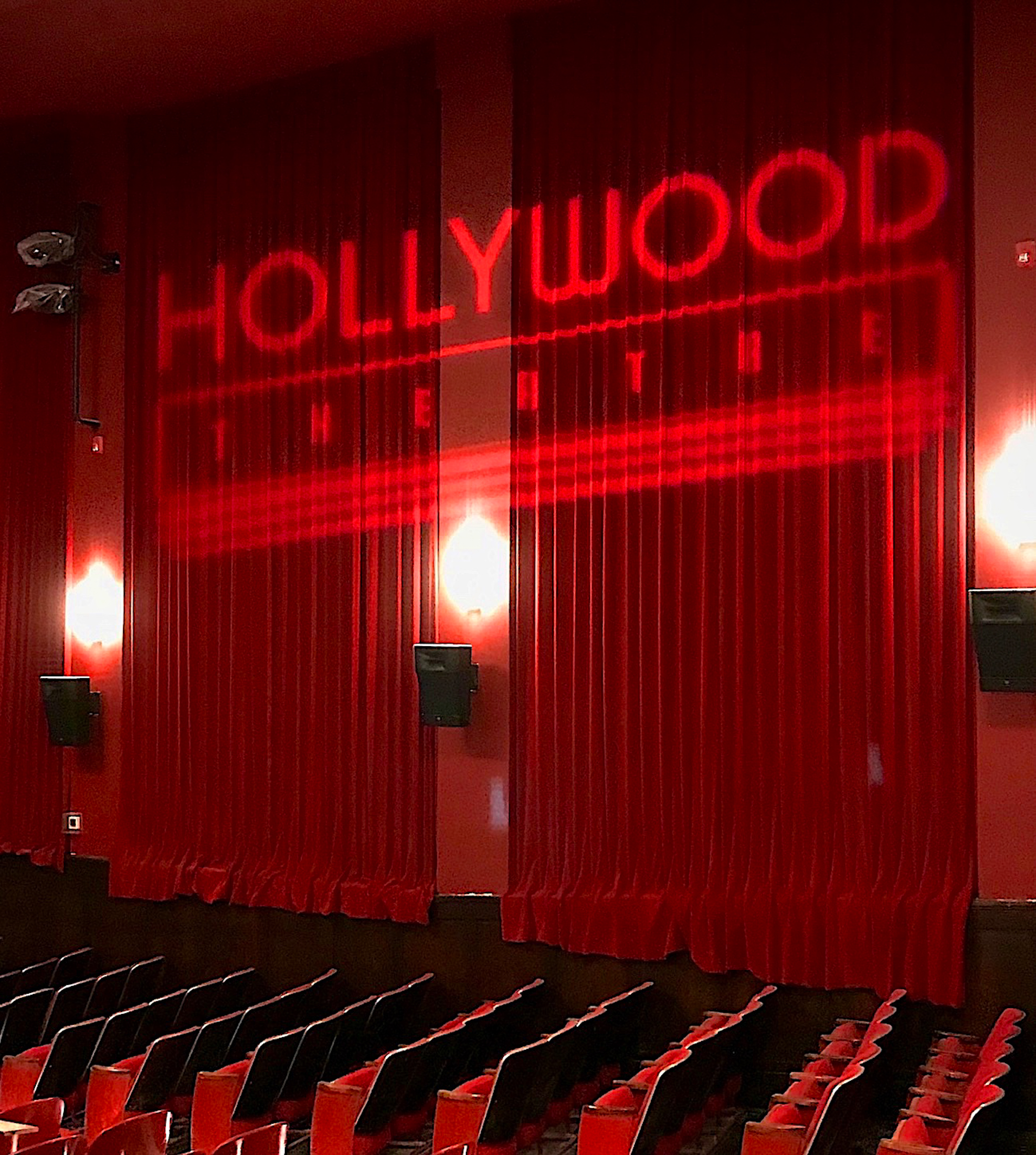 The restored theatre. Image courtesy of the Hollywood Theatre.

The heritage revitalization agreement protects the exterior and also prized elements of the interior, where I meet David Hawkes and Sean Mawhinney, who have been entrusted to see through the renovation and operate the venue. Between them, they bring plenty of experience in live events, primarily on the music side: a producer, promoter, and DJ in past lives, Hawkes was live entertainment director for the Imperial, and Mawhinney is building manager for the Commodore and Vogue Theatre, among other venues, and also a performer, producer, and promoter.

It’s obvious they don’t mind getting their hands dirty. Mawhinney shows me stacks of hundreds of reupholstered seats, all originals from ’35, that he and Hawkes are sanding down and polishing by hand, one by one. If the work is a grind—they are three years into the project—it doesn’t seem to have diminished their enthusiasm one jot.

“This is a real passion project for us,” Hawkes vouchsafes. “Sean grew up two blocks from here. I used to visit my grandmother every weekend, and for me Hollywood Theatre was my de facto babysitter at times. So when this opportunity came up, it felt like this was what my life had been leading up to in a way.” 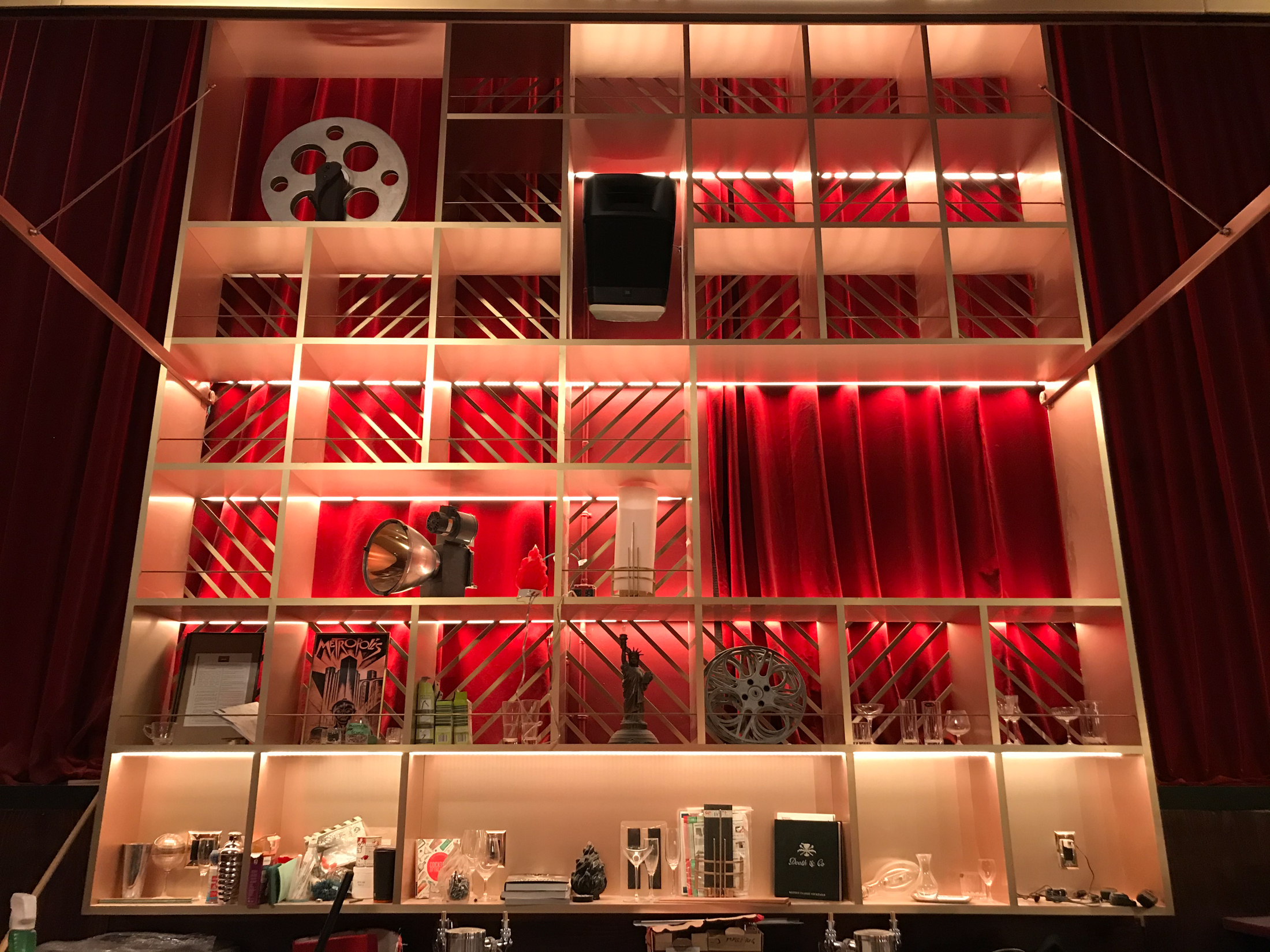 Image courtesy of the Hollywood Theatre.

The single screen auditorium is cavernous, large enough for nearly 600 patrons, with a tiered floor that slopes toward a proscenium stage, stepped ceiling, red walls, sconces, and a balcony. In June, the room is dotted with scaffolding and dust sheets. But already it is dominated by twin bars toward the back where the slope has been flattened, each pouring station capped with 20-foot-tall display cabinets that will house 35mm film reels, projectors, movie ephemera, and collectibles, as well as liquor.

Designed by the MA+HG architecture team, the bars are a bold statement, a tip of the hat to the golden age of celluloid dreams (and in sync with the art deco mood) but also an acknowledgement that this facility will be more than just a movie theatre. It must be, in Hawkes’ words, “an everything room,” with live music performances, non-profit, corporate, and community events, tech talks, and weddings. 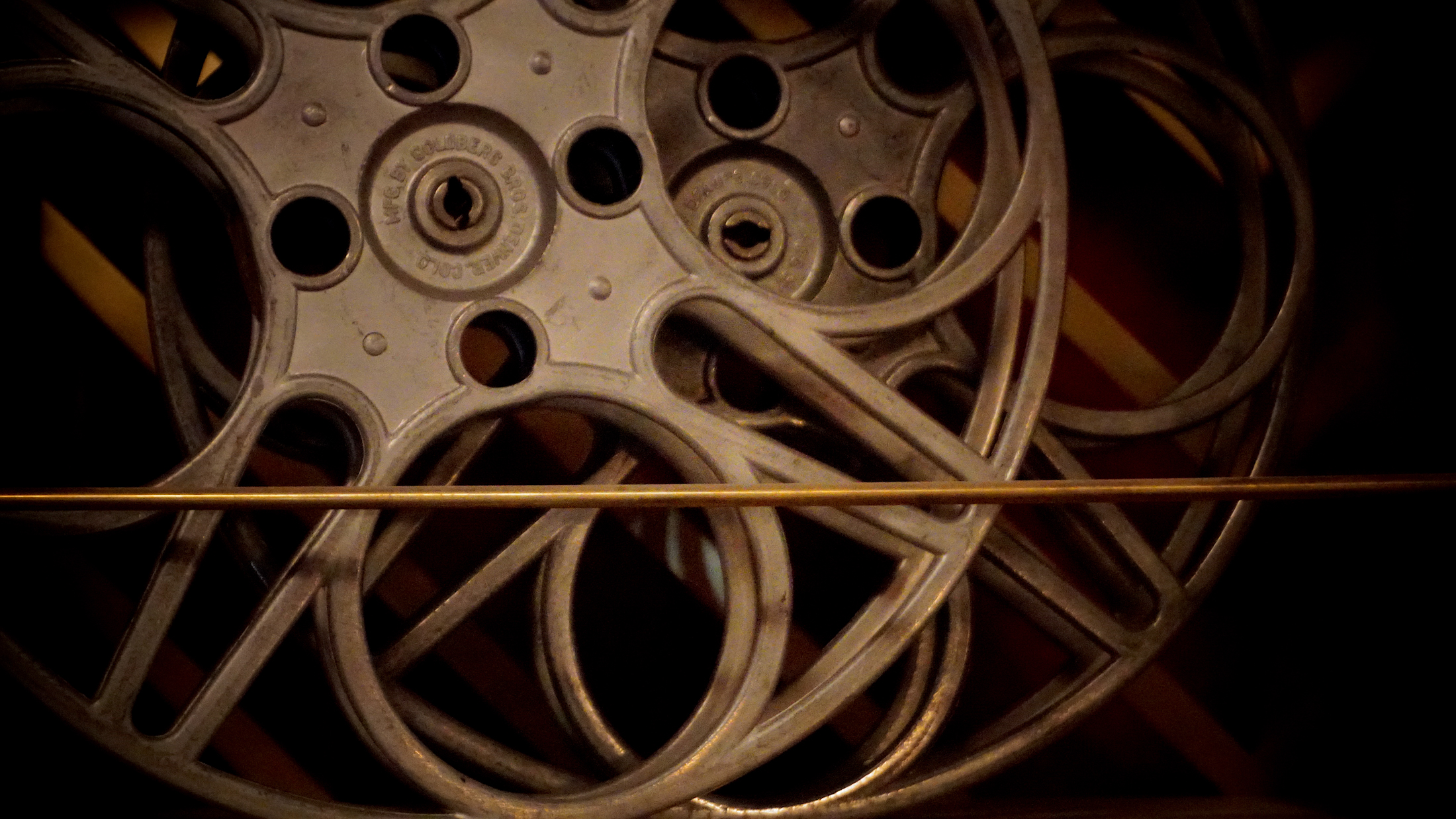 Image courtesy of the Hollywood Theatre.

Of course, no one foresaw they would be reopening in the midst of a pandemic, with audience numbers capped and the future uncertain. The current restrictions will limit the kind of events that can proceed in the short (and maybe medium) term. The operators can only hope there will be a relaxation soon and, in the meantime, aim to make the most of what may be an extended soft opening.

Asked what he’s most proud of, Hawkes lists the significant investment in tech: “The Barco laser projector, which I believe will be the first in the Lower Mainland; a P.A. that’s as good or better than the one in the Orpheum; state of the art sound and lighting…” 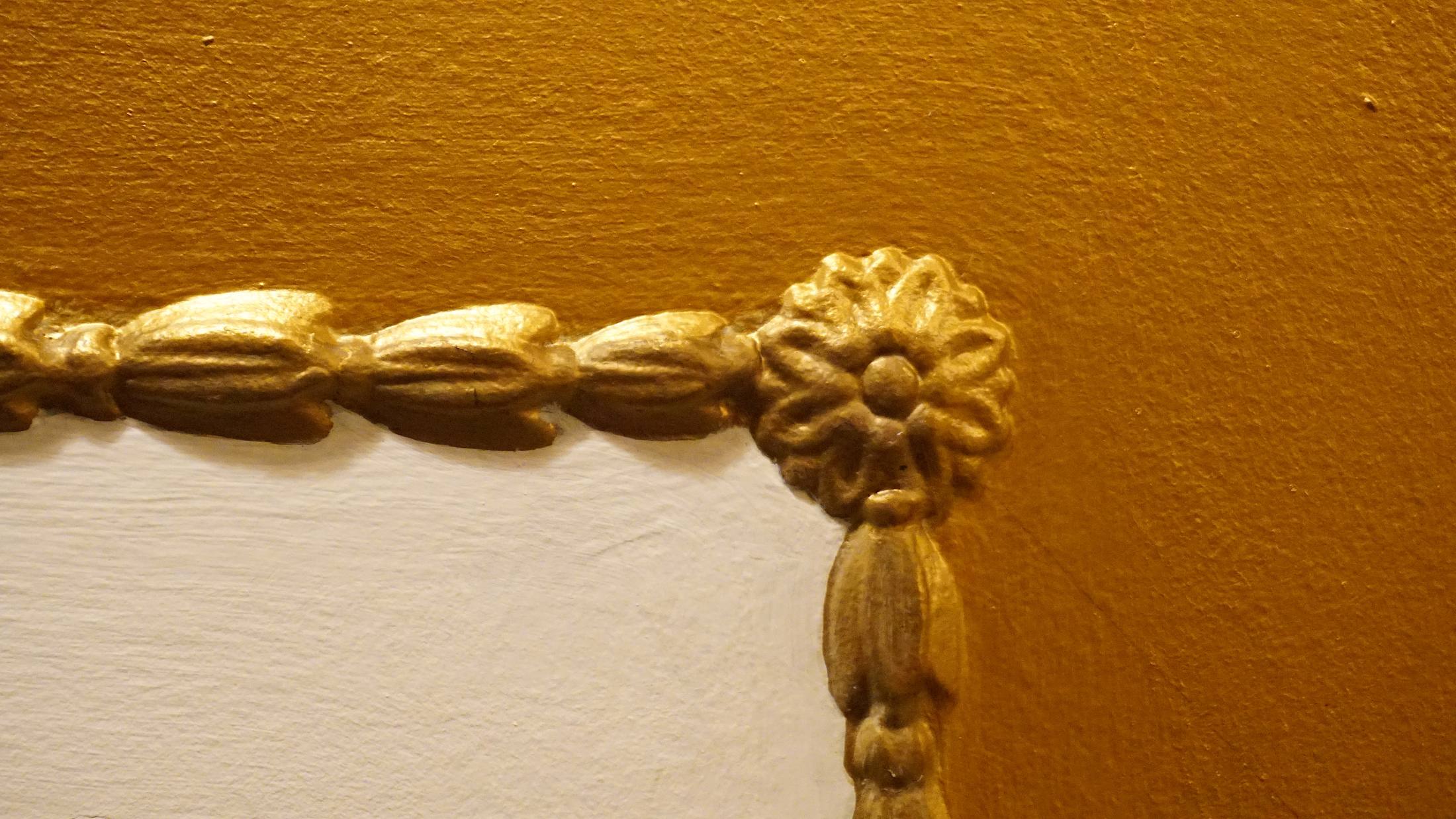 Courtesy of the Hollywood Theatre.

But then he returns to the building’s history and heritage. “It gave us the concept: the golden age of Hollywood. It dictated our design and gave us immediate focus. And you know, it’s hard to come up with a better name than Hollywood Theatre—on Broadway!”

Architect Marianne Amodio (the MA in MA+HG) strikes a similar note. “I don’t know anyone who doesn’t have a story about going to the Hollywood,” she says. “Everyone was 100 per cent in on saving the theatre and bringing it back to life. Now that it’s done, it feels a bit like a miracle.”