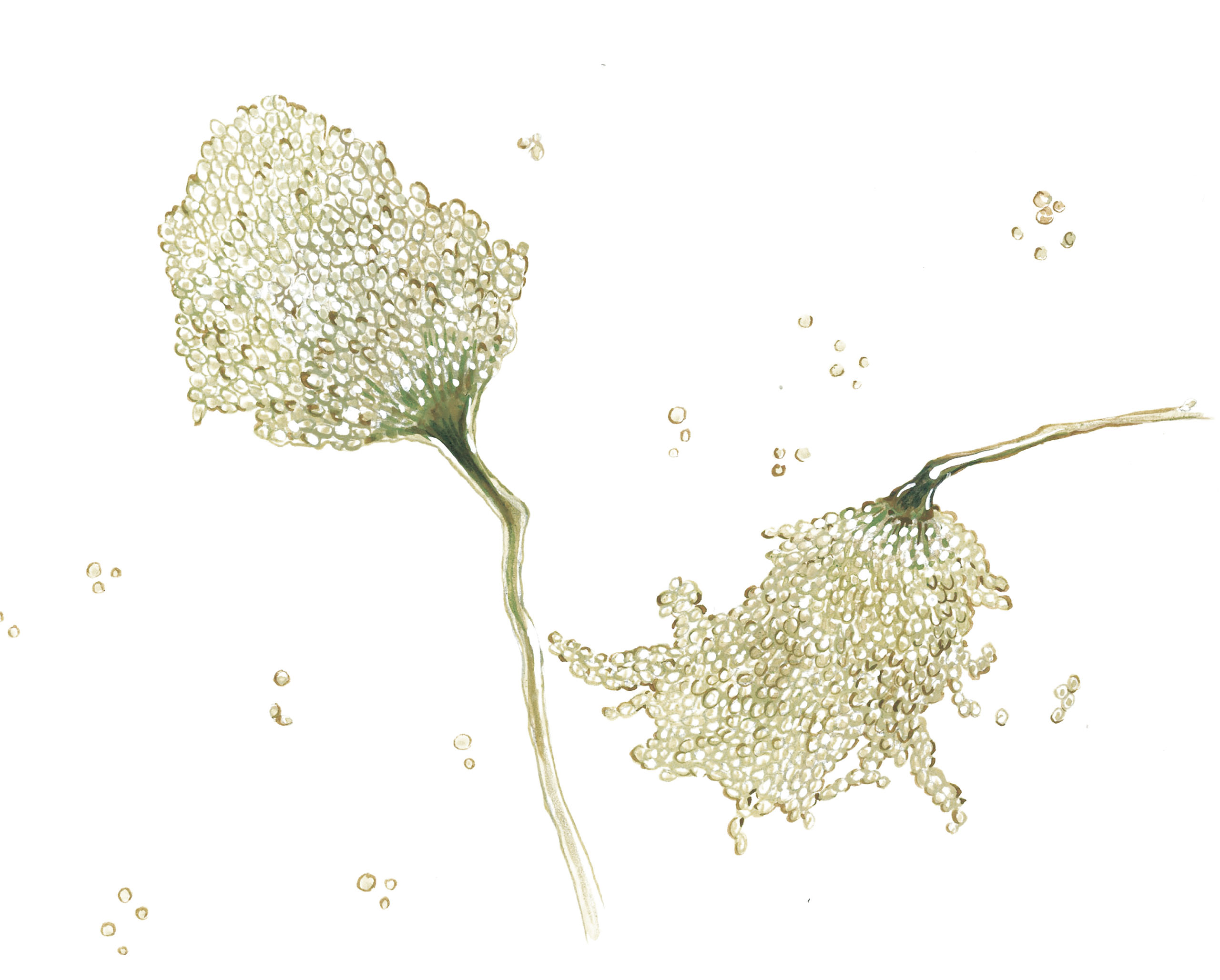 Imagine yourself sitting down to dinner. Your stomach growls and your mouth waters; the smells of onions and garlic, herbs and fresh bread curl around your nostrils. You raise a first bite eagerly to your lips. But at the last moment you notice, there on the surface of your food rests a spot of mould. No, not a spot; your food is alive with it. White, fuzzy tassels of mould pour from your spoon and wave their hairy tendrils toward your tongue. Patches of grey, green, white, and black accompany a scent of dank straw and musty earth.

If you have a sensitive stomach or a vivid imagination, you might have felt your body physically react to this description. Scientists will tell you the human reaction to mould, rot, and decay is nearly universal across cultures, the curling down of the mouth, wrinkling of the nose, and forced exhalation of breath perhaps an instinctual protection against disease and parasites.

But our reaction to these spores is also specific and cultural. The Italians and Hungarians love to eat smoked and dried sausages powdered with fine white must that both preserves the meat and brings out the flavour. The French couldn’t do without their Roquefort, stuck through with blue veins, or their Brie, so lively with white Penicillium camemberti fungus that it grows into the shape of the paper it’s wrapped in. Many of the great culinary inventions with which Japan has furnished the world—tamari, miso, sake, mirin—are courtesy of a single fungus, Aspergillus oryzae. Humans, in fact, love eating mould; we are just very particular about it.

The 2018 book The Noma Guide to Fermentation by chefs René Redzepi, Danish co-owner of Noma, and Canadian David Zilber, then-director of the restaurant’s fermentation lab, helped feed a worldwide fascination with fungal fermentation, from Michelin-starred restaurants to home kitchens. Chefs are rediscovering forgotten arts and imagining new applications, and Vancouver is no exception. We spoke to three local businesses cultivating culinary fungi about their funky creations—and why they are good for you.

Tonami van den Driesen is a perfectionist. As a teenager in Osaka, Japan, she discovered to her horror that most potato chips contain MSG, so she made her own until her mother insisted the hobby was becoming impractical. When she moved to Canada in 2000, she discovered that the local miso paste didn’t taste quite right to her, so once again, she made it herself. Miso-making, however, requires a special ingredient, koji rice. She could find it at Japanese grocery stores, but the colour and flavour weren’t up to her expectations. Of course, she learned to make her own. Today, van den Driesen’s business, Vankoji Foods, revolves around the near-magical powers of koji.

In the past few years, the potential of koji has illuminated the culinary world. Koji is made by sprinkling rice or other grains with the fungus Aspergillus oryzae, an ancient domesticated mould that has been found in East Asian tombs dating back two millennia. The rice emerges from incubation with a mild sweet, nutty flavour, but its real importance is its power of transformation.

Koji rice mixed with sweet rice and water will reduce starches into sugars that can then be fermented into alcohol to make sake. Koji rice mixed with soybeans and salt will slowly turn soy protein into amino acids, releasing the savoury umami taste of glutamic acid and producing miso. More recently, culinary tinkerers have used koji’s enzymatic power to produce rich, flavourful sauces out of everything from chicken wings to bee pollen.

In 2011, van den Driesen happened onto an ancient Japanese condiment that is making a slow revival in Japan: salt koji.

Salt koji, or shio koji, is one of the purest forms of koji seasoning, nothing but koji rice, water, and salt. Van den Driesen makes her koji in a warm corner of Vancouver’s Coho Commissary, mixes it with sea salt, then stirs daily for one or two weeks as it ages and develops flavour.

Van den Driesen says it can be hard to explain to customers exactly what koji is.

“Educating people is the biggest challenge, that’s for sure,” she says. “I’ve been changing my explanation. I used to try to explain what koji is, but I realized that it’s too technical. I’ve started to explain that it’s the basis for miso paste, soy sauce, sake, mirin, and people understand. Koji is umami. When you taste something that satisfies your palette, that makes you go, ‘Oh, that’s good!’ That’s umami.”

Shio koji is a subtle ingredient, but it can be transformative. As a marinade, the protein-melting enzymes can develop tenderness and flavour in an uninspiring cut of meat like a pork loin or turkey breast. In a salad dressing, it provides not only saltiness but roundness and depth as well. Van den Driesen says that as koji has filtered into public consciousness outside of Japan, food lovers are paying more attention.

“Up to four years ago, I had to approach the customer first. ‘Have you ever heard of koji or koji seasoning?’ But now, people come to my booth and say, ‘I know koji. What are you doing with it? How do I use it?’” 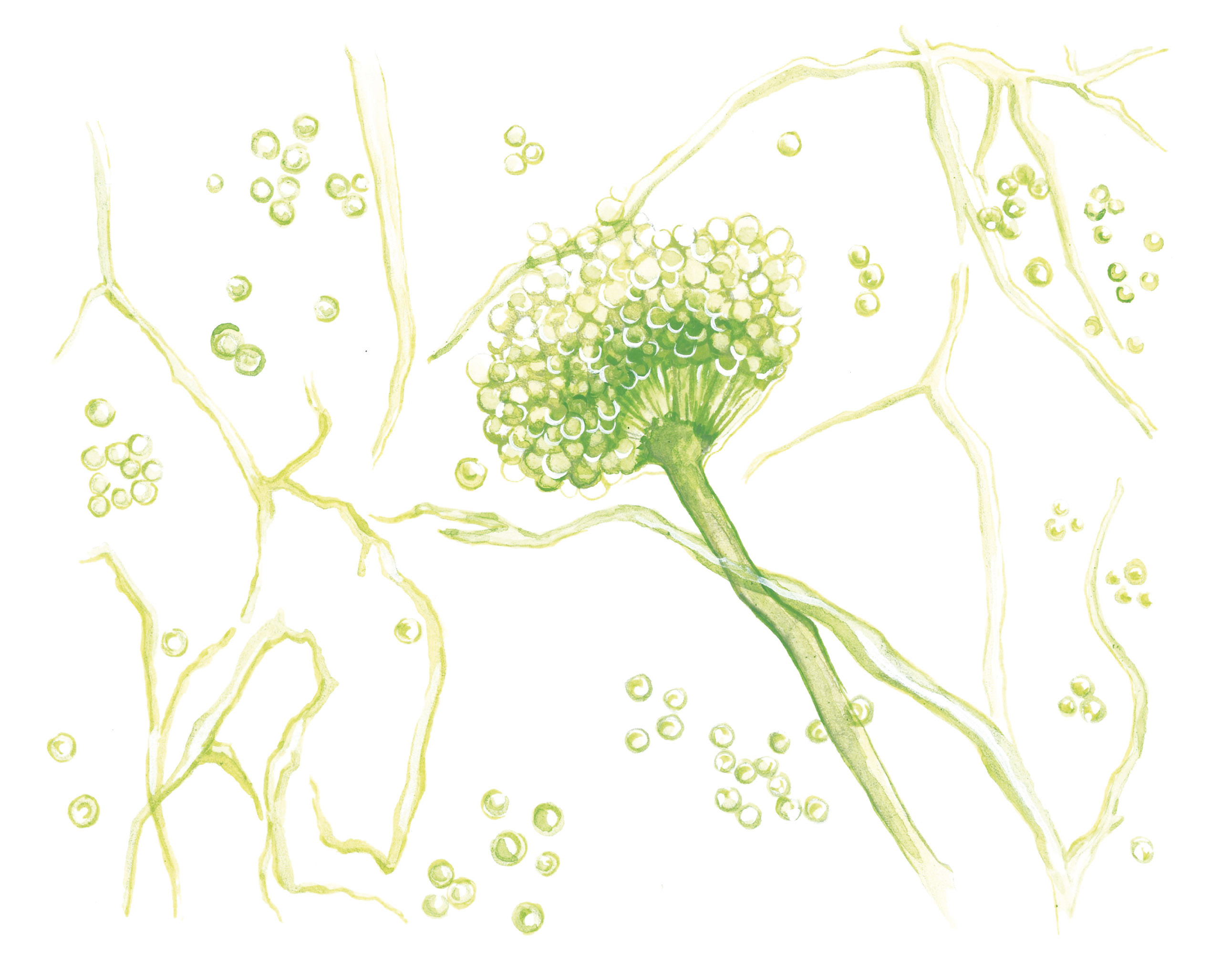 There isn’t much to notice in Denver Mace’s 1,250-square-foot industrial unit apart from 10 stained wine barrels, their mouths covered in white canvas. As he uncovers them, an aroma akin to an ineffable blend of molasses, ocean spray, red wine, and fresh coffee fills the room. This is shoyu, Japanese soy sauce, made with much the same method and ingredients used in Japan for centuries.

For each barrel, Mace steams Canadian soybeans and cracked wheat, which he then loads onto trays and inoculates with spores of the fungus Aspergillus sojae. Over two or three days in a warm, steamy loft above his production floor, the spores grow into a thick shag-carpet of green mould. The beans and wheat are then crumbled into brine in a barrel and covered for a long fermentation. Over the course of a year, a blend of yeasts, bacteria, and fungal enzymes will break down starch and protein into a complex, rich, dark-ruby-coloured liquid to be pressed, pasteurized, racked, filtered, and bottled.

Mace looks an unlikely candidate to be a champion of traditional Japanese fermentation. A stubbled 40-year-old in a Blue Jays baseball cap, he quit a 20-year career in the automotive and heavy truck industry to start Koji Fine Foods in Chilliwack, where he produces traditional Japanese miso as well as shoyu. His brewery has no chairs; he prefers to be on his feet, watching football while he stirs the soy sauce barrels with a wooden paddle.

While Mace has tinkered with fermentation for nearly a decade, a trip to Japan in 2018 turned him from hobbyist to evangelist. The conventional soy sauce you can buy in the grocery store in Canada, he says, is a weak imitation of the real thing. Commercial soy sauce is often churned out in a month or two using defatted soybean meal, far from the slow and work-intensive method of the traditional brewer. He returned with a library of traditional soy sauces, from inky black to golden tan. The difference between authentic and industrial soy sauce can’t be described, he says; it has to be experienced.

“I just say, ‘Here, just try this.’ I can preach to someone all day long, but ultimately I don’t have to say anything. The taste says it all.”

Mace first went to Japan to experience as many tastes and smells as possible, especially the darkest, richest shoyu, but unexpectedly fell in love with a lighter, brighter version. His Kanada Shoyu has a delicate saltiness and acidity, with a flavour that transforms on the tongue akin to an aged whisky. Soy sauce isn’t meant to be sipped from a glass, but his could be.

While he sells every bottle of the 150 litres of shoyu he presses each month, Mace has embraced the slow pace and unscalability of his business. Rather than chase grocery store contracts and big investors, he sells directly to customers over the internet or delivers by hand. For now, he wants to make a living in the style of community shoyu microbreweries across Japan and to continue to open people’s eyes to the authentic soy sauce experience.

“Nobody else will tell you that your soy sauce isn’t real,” he says, “but it’s the truth.” 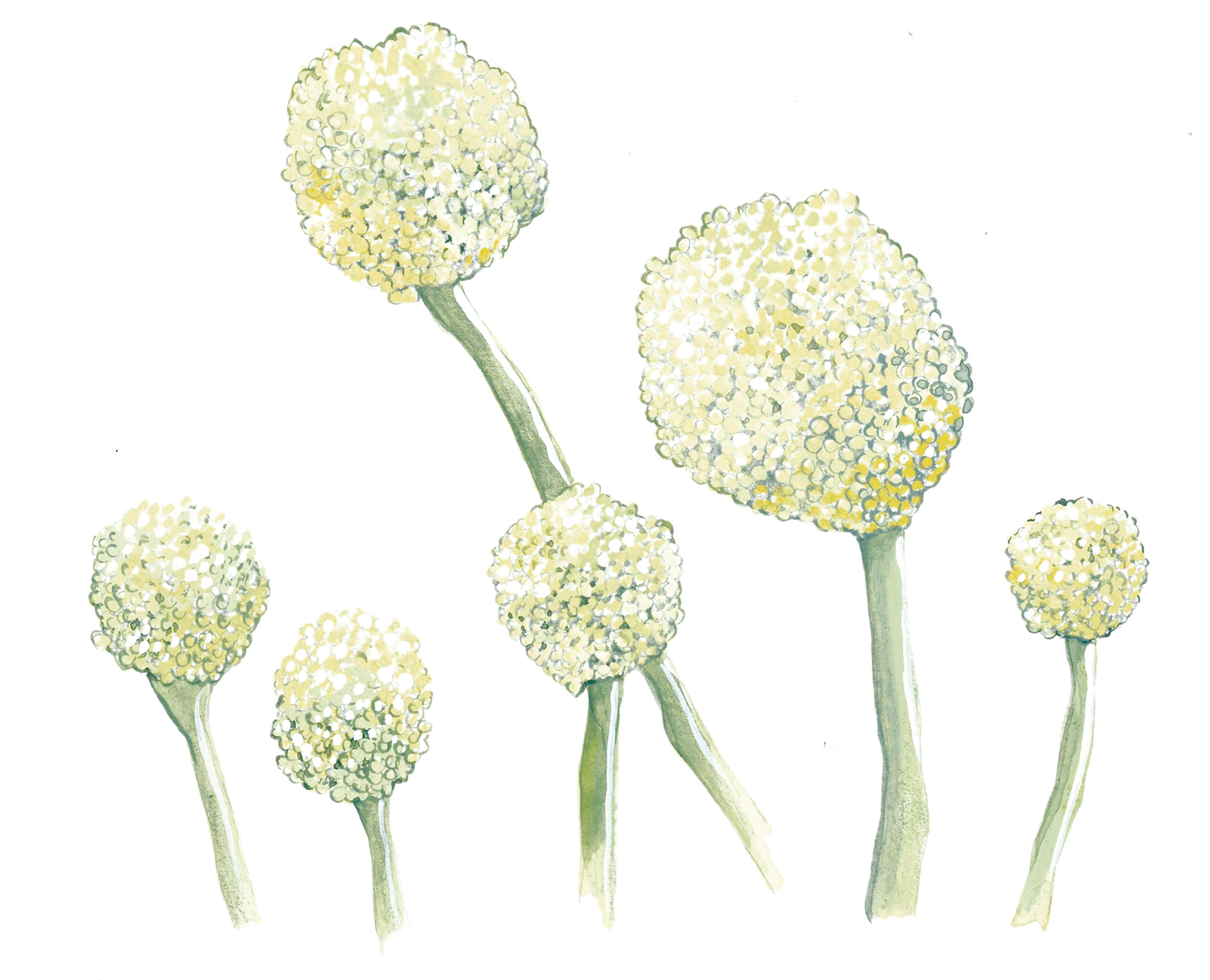 Tempeh has a reputation as a health food, popular only among vegans and the most adventurous foodies, but for Andrew Chen, growing up in Indonesia, it was an everyday snack he would pick up on the way home from school, a savoury soft slice of soybean deep fried in crispy, aromatic batter.

“It was junk food!” he laughs.

Chen rediscovered tempeh as a food technology student at BCIT when he and three friends entered a competition to make an innovative food product out of beans, peas, or lentils. They tried making beer out of beans, but it was a disgusting failure. At the last moment, Chen thought of tempeh, and the team made a tempeh nugget from chickpeas and lentils that won first prize regionally and fourth nationally. The idea for their company, Tempea, was born.

In a small shared kitchen on the North Vancouver waterfront, Chen pours green peas, lima beans, or the traditional soybeans into barrels where they are mixed with lactobacilli bacteria, the same as those that create yogurt or sauerkraut. A two-day soak with the bacteria prepares the beans for the main fermentation, creating the right balance of acidity and improving flavour and digestibility. Next the beans are dehulled, bagged, and inoculated with Rhizopus oligosporus, a fungus that likely originated on the leaves of Indonesian hibiscus trees. Over two days in a warm incubator, the fungus binds the loose beans together into a firm cake covered with creamy white mould similar to the exterior of a Brie cheese. Unlike most store-bought tempeh, which is sold blanched and vacuum packed, Tempea sells tempeh fresh with the white mould blanket intact.

Tempeh, Chen says, is the perfect vegetarian protein source: simple, fermented, and higher in protein and fibre than even firm tofu. His greatest concern isn’t other tempeh producers but the rise of mass-produced fake meats such as the Impossible Burger. He hopes the appeal of tempeh will be as something completely different, not an imitation.

“We are pushing the fact that this is all natural,” he says. “People want to eat more healthy, but they try to simulate meat. We want to push them towards something that is not meat, that’s vegan, and that actually tastes good.”

What was once a door-to-door delivery operation now serves restaurants around Vancouver, Whole Foods, and a long list of small grocery stores. You’ll find Tempea tempeh with grilled mushrooms and melted cheese in a Reuben sandwich at Kitsilano’s classic vegetarian diner the Naam and in crispy steamed bao at slick Chinatown eatery Mila. In 2021, Tempea plans to move from its shared North Vancouver home to a new facility where it can increase production tenfold from its current two tons of tempeh a month, enough to sell to more grocery chains and reach markets outside of the Lower Mainland.

The next challenge will be building equipment to furnish the new facility.

“If you want to make potato chips, there are a hundred companies to sell you all the equipment you need,” Chen says. “Not with tempeh.”

Read more of our summer issue.