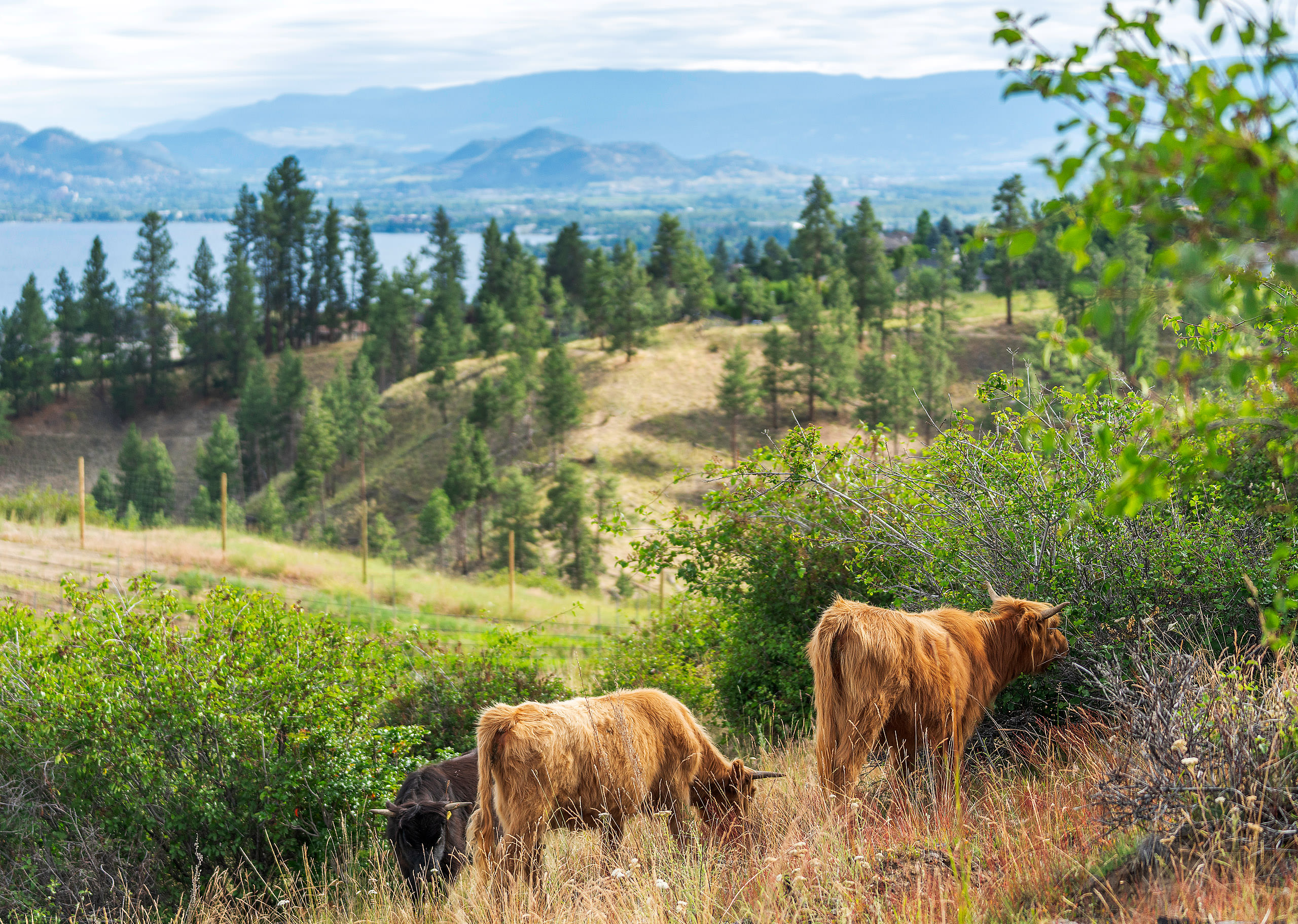 Eight years ago, Anthony von Mandl had what can only be described as an epiphany. The founder of Mission Hill Family Estate and owner of a cluster of other Okanagan wineries—CedarCreek, Martin’s Lane, CheckMate, Road 13, and Liquidity—was walking through the vineyards of northern Italy with Alois Lageder. Von Mandl was no stranger to the concept of organic vineyards: one of the group’s sites close to Oliver has produced organic grapes for more than a decade. But on that trip he experienced a scale and commitment to organics, and to biodynamic farming and producing more broadly, that completely altered his thinking. Upon his return he got busy, and this summer, if all continues as expected, the group will mark a profound milestone, attaining organic certification for each of its vineyards—47 of them in total.

“It was a major undertaking,” von Mandl admits. “Really intense, and then fired up by my spending those days in northern Italy seeing and tasting the difference, tasting organic and biodynamic wines around the world, and also understanding the challenge. We had to have a plan to make it happen without losing a percentage of our minds—and our crops—along the way.”

The first step, Mission Hill president Darryl Brooker explains, was to set attainable goals. Pre-organic, the target would be sustainability; post-organic would be to work toward biodynamic status (where farming methods such as cover crops and introducing animals on the land create a soil that is replenished naturally).

“We decided organic was the right spot to start,” he says. “Convert our vineyards and get them fully certified, and then look at the next step. That’s pretty well where we’re at now.”

“We had to have a plan to make it happen without losing a percentage of our minds—and our crops—along the way.”

Kurt Simcic fit the bill. The New Zealander arrived in Kelowna in May 2017, bringing years of experience growing high-quality grapes, and specializing in that most fickle of fruit, pinot noir.

But although he’d experienced the whole process, from farming already established organic vineyards to establishing them and steering them through the three-year conversion process, he admits he found Mission Hill’s footprint daunting. “I’ve never been involved quite to this scale,” Simcic says. 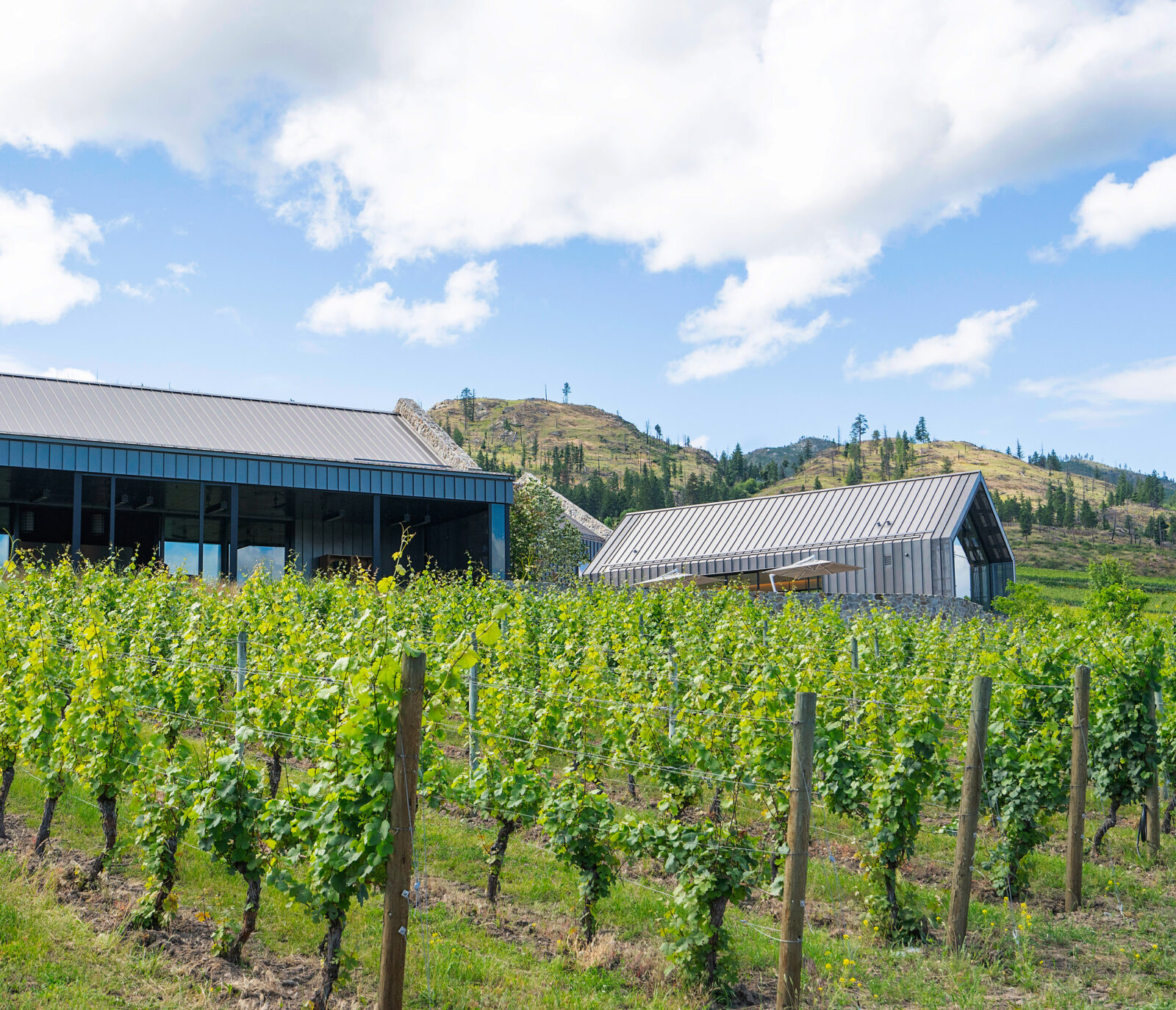 At CedarCreek Estate Winery the connection between the land, the wine, and the restaurant is fully integrated. Highland cattle and bees foster biodiversity.

“The initial plan was to just convert the northern vineyards,” he adds. “But then I sat down with Darryl, and he said, ‘Can we go for it across the whole valley?’ And we made this big plan which we’re just about at the end of now—getting to this milestone of everything being certified.”

In addition to the 47 vineyards reaching certified organic standards, CedarCreek, Martin’s Lane, and Mission Hill wineries (and their wines) have also reached organic status, with the rest of the group in the process of achieving the same.

Organic winemaking is a life choice for the viticulturist, one that was triggered by the arrival of his first child while working for a company farming conventional vines in Marlborough. The use of pesticides and fertilizers started to alarm him.

“I didn’t want to go home,” he remembers. “I couldn’t bear the idea that I was covered in chemicals and going home to hold my baby. I left that producer for a much smaller organic operation, and I’ve never regretted it.”

Ecocert, an organization based in France that certifies clients globally, conducted the group’s first audit during the 2019 harvest. To get a sense of the scale of the work involved, it’s worth noting that the group’s vineyards span the Okanagan valley, running 200 kilometres from dry, hot Osoyoos in the far south to the cooler northern Lake Country, making up 12 per cent of the Okanagan’s vineyard acreage.

Thirty-five of the vineyards are standalone, meaning their conversion to organic farming could be done independently of neighbouring farms. The rest bordered conventional farms, requiring a buffer row of vines to protect the organic plants. In the northern sites, Brooker says they approached the owners of the bordering properties and offered to farm their outside rows—the wines would be managed and the fruit harvested for them.

“It meant we didn’t have to give up a row of prime grapes,” Brooker explains—although the same wasn’t possible in the southern vineyards, where grapes from the outside row of vines are sacrificed to maintain the integrity of the organic certification. 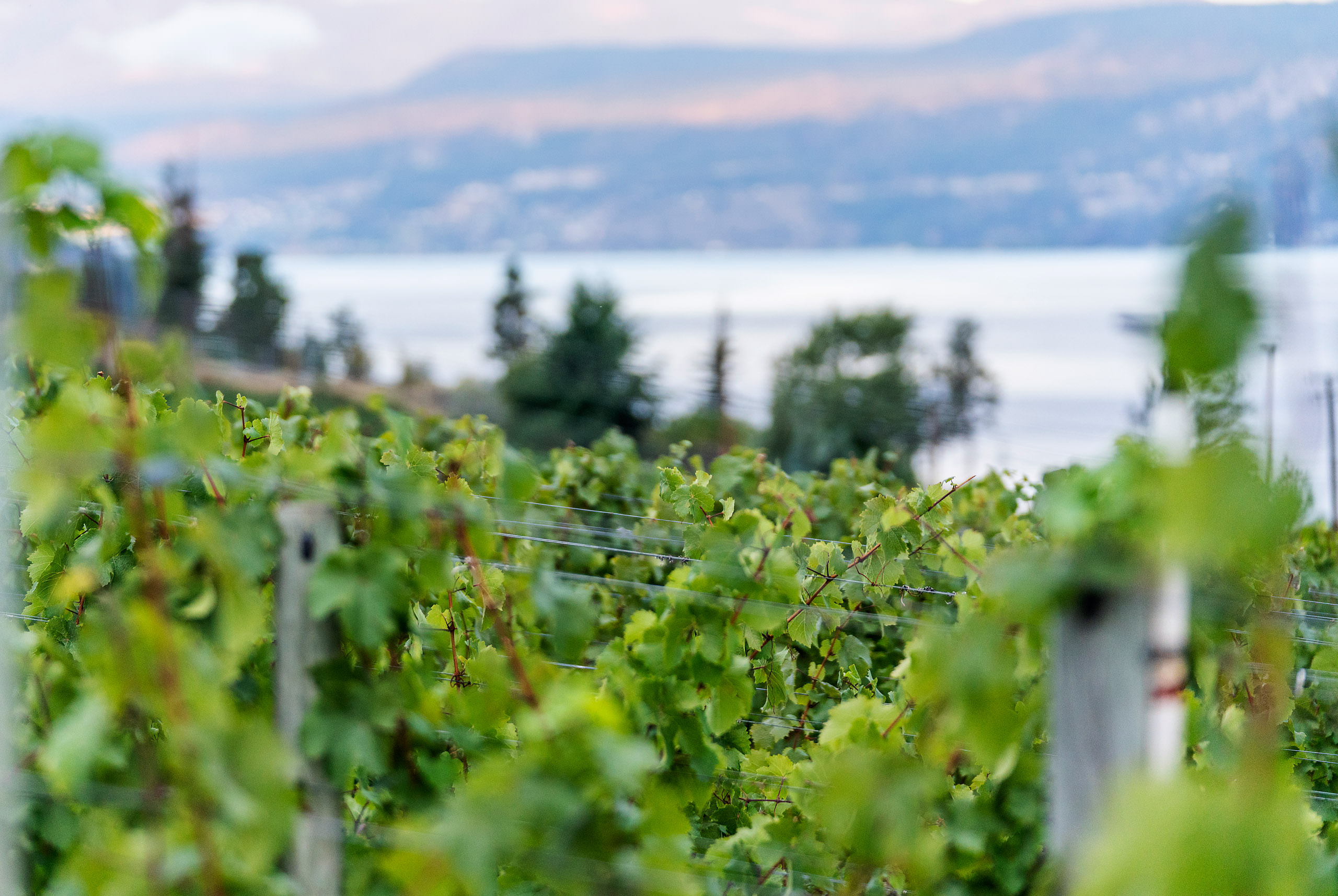 The transition to organic farming raised many issues, not least because the unique and discrete microclimates of the Okanagan mean different pests inhabit the north and south vineyards. Then there was the need for a plentiful and reliable supply of organic compost. Instead of looking for ways to do the bare minimum required for organic certification, the group went all in with an integrated farming approach where five to 10 per cent of their operations would be organic non-grapevine farming—both crops and animal based. The result: the vineyards are now home to cows, chickens, bees, and purpose-built earthworm farms.

Three Highland cattle arrived last year, with two more coming soon. The cows provide nutrient-dense manure, as well as encouraging biodiversity on the land by grazing. A flock of chickens in a mobile coop travels among the vineyards; they eat the cutworms that emerge at night to feast on vine buds. (This, hilariously, involved one of the team on his hands and knees teaching the chicks when they arrived how to eat the offending critters.) Without the birds, workers wearing headlamps had to remove the cutworms by hand.

Meanwhile the bees—housed in shipping containers at CedarCreek to prevent bear attacks—don’t just foster plant life and provide honey for the group’s restaurants but have also shown themselves saviours of the fragile pinot noir grapes.

“Pinot noir is called the heartbreaker grape,” von Mandl notes. “It really is the most difficult-to-make red wine in the world, and because the skins are thin, they need to be handled very gently. If you do get a bit of a rainfall, and they swell just a bit, they split, and when they split, the juice leaks and now you’ve got sugar. That means you’ve got yeast everywhere—they start to develop botrytis, which is disastrous. Of course, in the Okanagan, we have the benefit of having among the lowest rainfall of any wine region in the world, so it’s not a frequent problem.

“But two years ago, we did have rain, and some of the pinot noir grapes swelled up and split and started spilling sugar. And what happened? The bees scurried up and basically ate away all the sugar and sealed up the grape skins again. They actually sealed the grapes—healed them, if you will. Think what that does to the quality and how it preserved the grapes. We had no botrytis at all. That’s the balance that nature provides.” 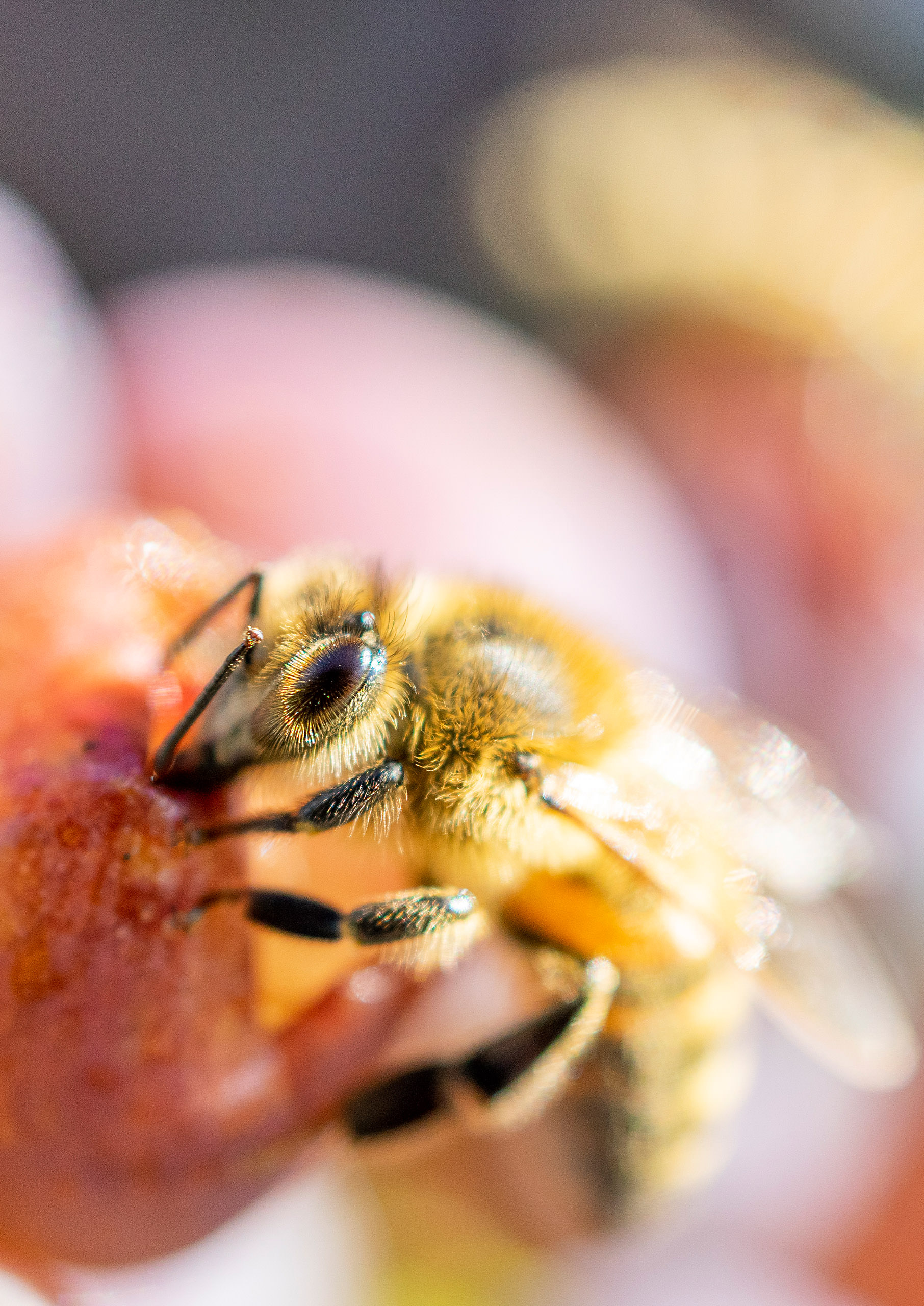 The decision to go completely organic (and move toward biodynamic) is not without cost. The investment is significant and not short term; Brooker considers it a 10-year payback. Von Mandl is clear the decision was never about profit—his is a family-owned winery group, and, he says, stewardship of the land for generations to come is non-negotiable. Interestingly, the group is not making a huge marketing push to trumpet the change: the bottles will be marked organic in small lettering on the base of the back label.

“There’s just more flavour in the grapes, and that has to be down to the farming of them.”

Despite needing no convincing that an organic approach would bring dividends for the land and the employees working it, Brooker says one thing he did not expect was a significant improvement in the quality of the fruit and, by extension, the wine.

“I was a cynic on that level,” he admits. “I thought organic might help us pay more attention in the vineyard, et cetera. But there’s been some really fast benefits, and probably the one that really jumps out is lower alcohol. We’re getting more flavour, and lower sugar levels in the vineyard, which obviously translates into lower alcohol in the wine. We’re specifically seeing it at CedarCreek, where we’re between 0.5 and 1 per cent lower in alcohol the last couple of years than what we were three, four years ago. There’s just more flavour in the grapes, and that has to be down to the farming of them.”

The next step will be to incorporate biodynamics and expand the wider farming practices. At the forefront of this expansion is CedarCreek (where Simcic is based), where the connection between the land, the wine, and the kitchen at Home Block, the winery’s restaurant, has become fully integrated. For von Mandl, this journey to a place of environmental harmony is both gratifying and terrifying.

“It’s almost miraculous to see what can happen,” he says. He pauses to chuckle. “And at the same time, it’s like jumping off a cliff.”