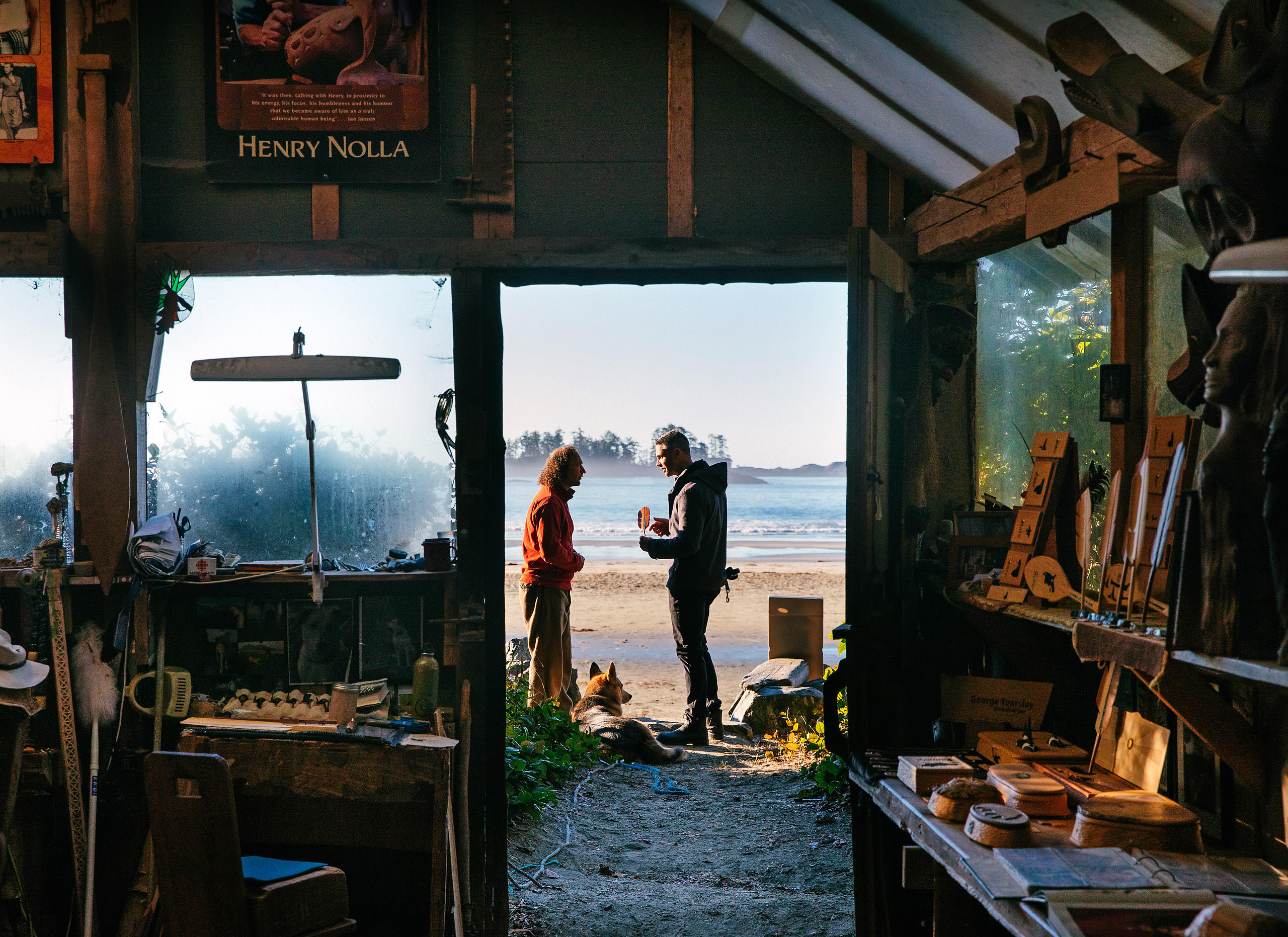 Feather George in conversation on the beach outside the carving shed. Photo by Jeremy Koreski.

I trace the tide line of Chesterman Beach, thrumming with the crash of surf and steady beat of rain. In the sombre beauty of a day in Tofino on the west coast of Vancouver Island, everything is gradations of grey. The only pop of colour is a smattering of buoys marking a sign that simply states, “art.” I turn my gaze inland to a weathered-cedar carving shed. The door is open, and on the sand floor is a glorious jumble of fragrant wood, from shavings underfoot to a totem pole as high as the ceiling.

I wander among delicate carved feathers inlaid with abalone. A piece with the intricate details of a Viking ship and eagle lies on a workbench, in progress and surrounded by wood chips. Pasted to the wall are photos and newspaper clippings of a skinny, bare-chested, deeply tanned, long-haired and -bearded smiley man: Henry Nolla, who built this place.

Another smiling man with unruly hair and beard appears from the shadows. I notice a twinkle at his earlobe, a silver earring in the shape of a feather. I’ve heard of Feather George, the guardian of this carving shed, which sits on the Wickaninnish Inn’s property. He nods at the carved-wood feathers. “I’ve been carving those for 23 years,” he says, “and 21 years in Tofino.” Now George Yearsley is more commonly known by his nickname.

When I ask Feather George why he lives in Tofino, his answer is straightforward: Henry. “I met Henry and I thought, wow, I just want to come and carve.” And after Nolla died, Feather George became a resident carver at his shed. “Henry was the reason that drove me here,” Feather George says, “but it was also the wilderness and old-growth forests. I needed that around me. … I’ve had a wolf follow me home, there are cougars, and I have old-growth cedars right in my front yard. I am sitting on this beach every day getting filled up by the energy of the waves.” 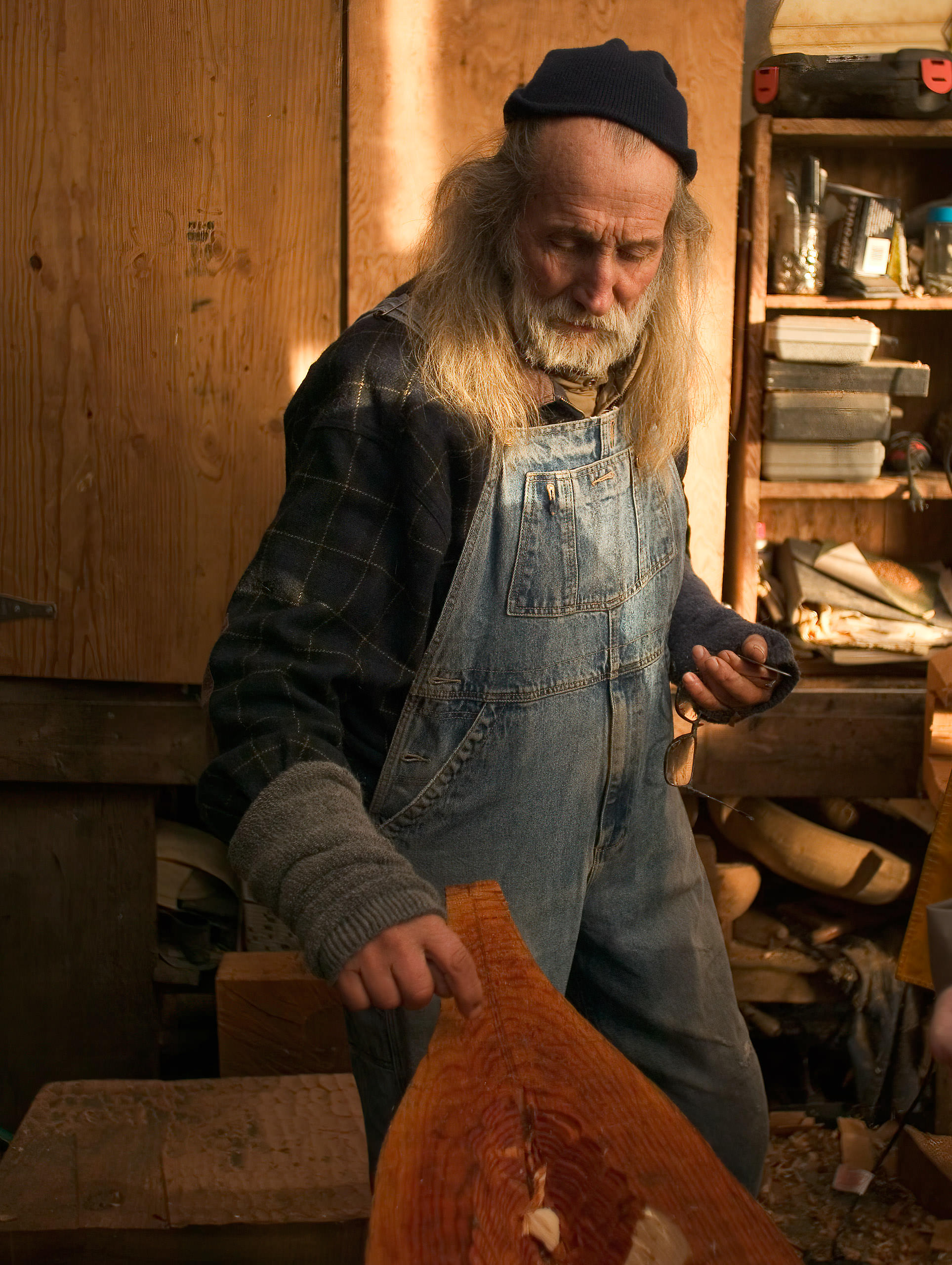 Henry Nolla at work in the carving shed. Photo by Neil Rabinowitz.

It’s hard not to get filled up here. On this beach is where Joe Martin, Nuu-chah-nulth artist and master canoe carver, steamed a canoe in the traditional way, using hot rocks from a fire. Most carvers in Tofino have some connection to Nolla, including local legend and Indigenous artist Roy Henry Vickers, who collaborated with him on numerous artworks and totem poles, many carved on Chesterman Beach. Nolla carved and painted the facade of Vickers’ landmark longhouse-style gallery in town.

Charles McDiarmid, owner of the Wickaninnish Inn, later tells me that Nolla arrived on this coast long before the 25-year-old Relais & Châteaux hotel. In 1978, McDiarmid’s father’s contractor hired Nolla, who had “hair down to his butt and his beard just about as long,” as the lead carpenter to build the family cabin, which still sits north of the inn. In exchange for taking care of the property, Nolla lived rent-free on the beach in a cabin he built for himself, later worked on the inn (carving its yellow-cedar doors and adzing the post-and-beam structure), and built the carving shed he used until his death in 2004.

McDiarmid says Nolla was “the éminence grise of the carving community of Tofino and probably as close to a Tofino philosopher as we have ever had.” He was the person everyone turned to, McDiarmid says, as a carver, carpenter, sailor (he sailed here from the east coast of Canada through the Panama Canal), master welder, and blacksmith. He forged his own carving tools, including hook knives, to carve under the lips of bowls and the wings of eagles and ravens in the totem pole. “He was an innovator,” McDiarmid says.

Nolla was “the éminence grise of the carving community of Tofino and probably as close to a Tofino philosopher as we have ever had.”

Nolla was born and raised in Europe by a Swedish mother and Catalonian father, and had long whittled wood, but he learned to carve in the Northwest Indigenous style, which he loved and revered, from Vickers. “We ran into a little flak because I’m teaching a white guy how to carve,” Vickers says. “And I would say to people, well, I’m colour blind.” Art is for the public, and “our art in the old days, right at the time of colonization, the art was shared, always, always,” he emphasizes. “And people weren’t discriminated against … people were people.” Vickers tells me about a totem pole in his gallery that they carved together. “I carved one side, and he carved the other, and you can’t tell which side which artist carved. He was an incredible student.” Nolla himself mentored many more. “Henry was so accomplished, and he was willing to teach anyone,” McDiarmid says. “If anyone wanted to learn, all they had to do was visit with Henry.” He notes, “He wouldn’t do a formal class, but you could come and carve right there in the carving shed with him.” 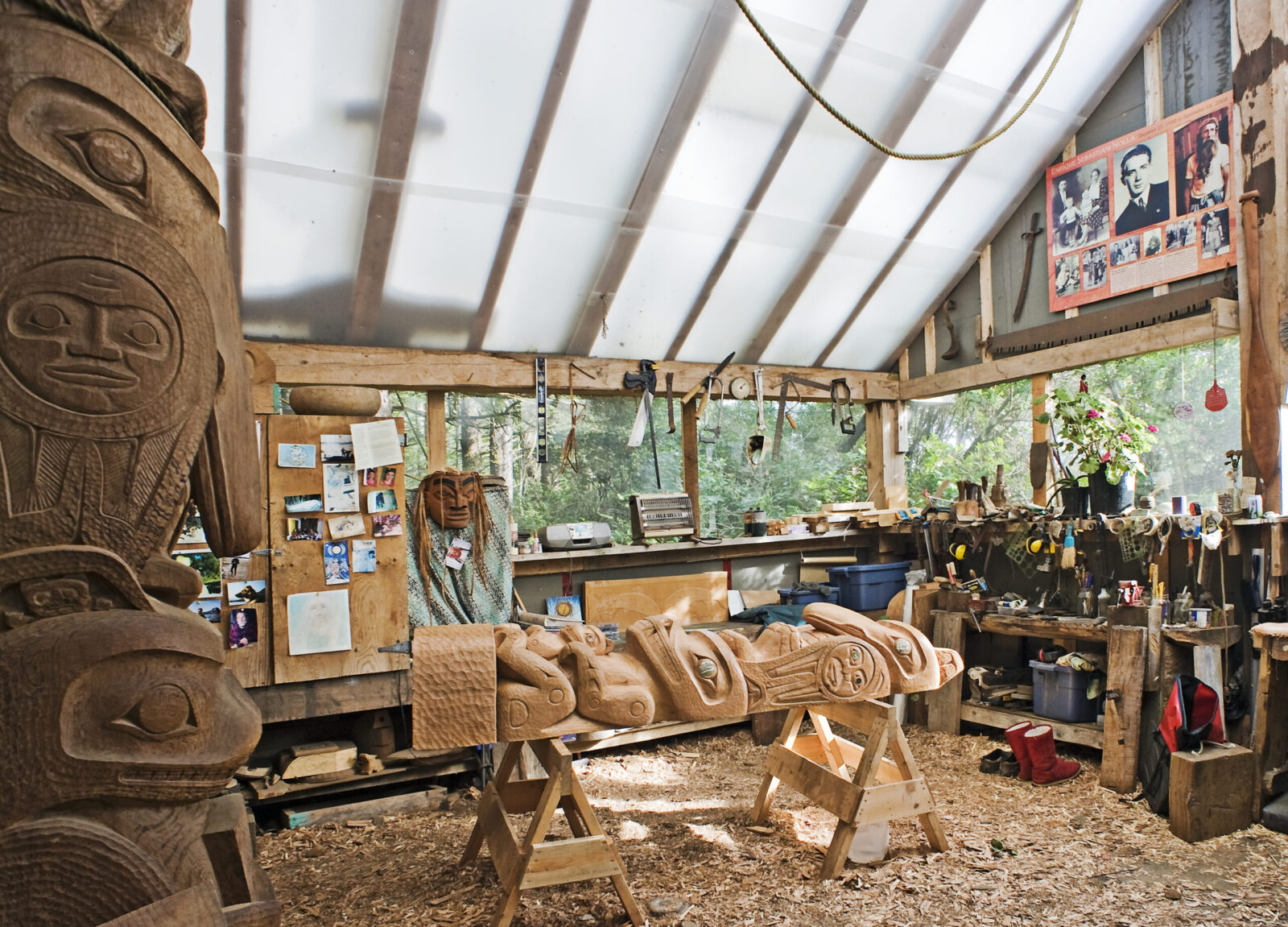 That open-door mindset nurtured the now-thriving carving scene in Tofino and sparked a new generation of Tla-o-qui-aht carvers and Nuu-chah-nulth artists of the traditional art form that’s existed here for centuries. The biennial Carving on the Edge Festival, started in 2010 by a group of Nuu-chah-nulth carvers and elders at the Tin Wis carving shed (another creative space and gathering place on Mackenzie Beach), shares these traditions and cultural teachings of West Coast carving. The first festival had a retrospective on Nolla, who continues to inspire carvers, even those who’ve never met him, such as Christen Dokk Smith from Norway.

“We ran into a little flak because I’m teaching a white guy how to carve. And I would say to people, well, I’m colour blind.”

Like Nolla, Dokk Smith has carved alongside First Nations artists, collaborating with local master carvers including Joe David (whose work includes the Tofino totem pole that honours Tla-o-qui-aht hereditary chiefs), learning to use other tools, and developing a more profound connection to the wood. “That’s one thing that I’ve really picked up here,” he says, “the respect for nature and the wood.” In Norway, he’d buy a piece of wood at a mill without thinking about what it had been before. “Walking through old-growth forest, it’s really opened my eyes to the value of the trees and the history of the tree.”

It’s that history that resonates. “I love to learn from the First Nations,” Dokk Smith says. “What I’m missing with Viking carving is stories.” He listens to the narratives behind the Indigenous motifs and applies this storytelling structure to his Viking carving. On any day in Tofino, there’s an opportunity to learn from other carvers; he recently observed Martin carve and share the stories of a totem. 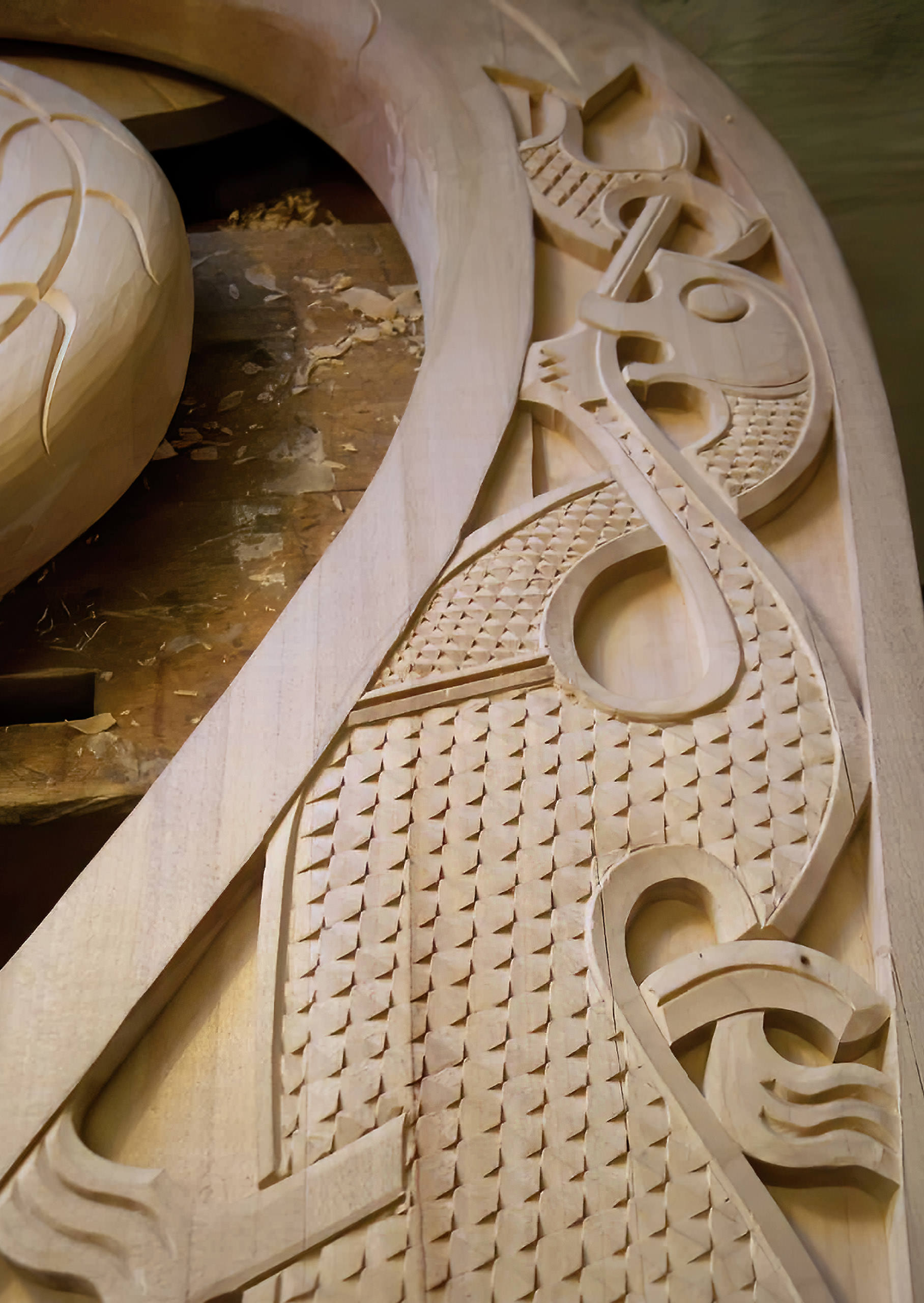 Carving by Christen Dokk Smith, photo taken by him.

And the carving shed is a reservoir of tangential stories. Ask Feather George a question, and he’ll give you a “multipronged” story, as he puts it. He tells me about Stan Rogers (“greatest Canadian folk musician of all time”), quotes Bruce Cockburn, paraphrases Farley Mowat (“Never let the truth get in the way of a good story”), recalls the first feather he carved with a Swiss Army knife, mentions his feather earring is made by a local Indigenous artist, shows me his “banana phone” (a mobile phone made out of wood, of course), describes bushwhacking in nearby Carmanah Valley, remembers Nolla’s penchant for being in the buff on the beach, and says I should try his namesake Feather George cocktail at the Wick. He also shows me Nolla’s antique hand plane with which he shaves the cedar curls that garnish the eponymous drink.

It’s all a wonderful mashup that traces back to the spirit of Nolla. As McDiarmid tells me, “It’s part of our legacy. I even say to guests, if you want to really know the Wickaninnish, go to the carving shed because that’s the essence of it.” Most of Nolla’s tools are in the shed, and some are still used, like that plane or his hand-forged adze, which Nolla used to create the wavy texture on the inn’s posts, beams, and fireplace mantels, as well as carvings throughout Tofino, including the town’s welcome sign (carved with Vickers). The adze is on display in the Wick’s Henry Nolla Art Gallery and comes out to maintain the inn’s signature rippled woodwork. 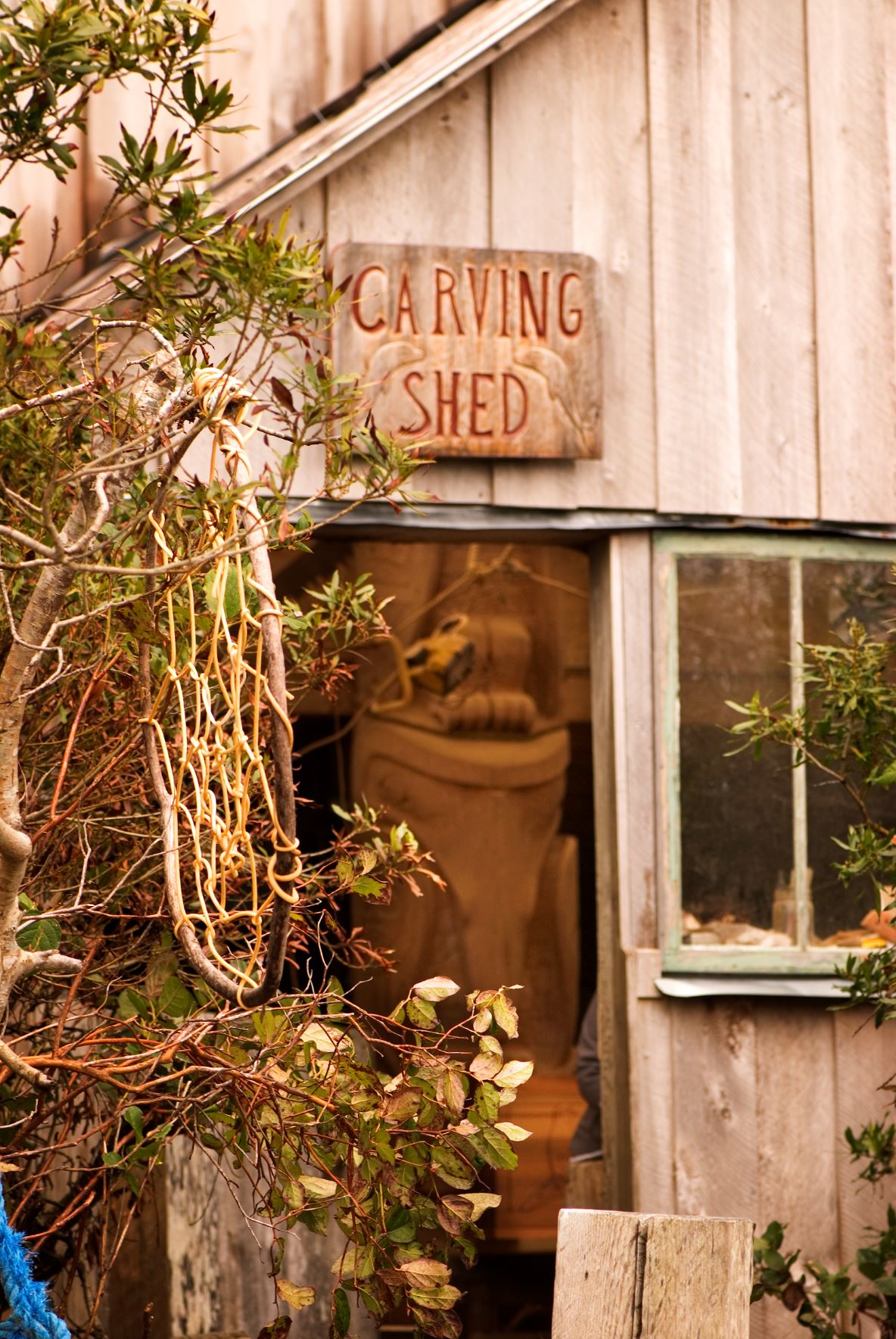 Nolla’s tools are part of the history of the carving shed, Feather George says, and there’s energy in that history. He feels it too in the old-growth wood he carves. “All recycled and reclaimed,” he notes, sometimes 600 years old, collected by friends who mill ocean-salvaged wood. “I have such a great reverence for this wood. This is an honour and a gift to carve. I love old-growth forests more than anything in the planet. So when I’m in those forests, I’m deeply in love.” It’s a devotion shared by all those who’ve been a part of the carving shed.

Feather George sits down at the window, surrounded by carving tools, past and present, and the aroma of cedar. Outside, the waves continue to crash and the rain patters on the roof. He shows me his own tools and starts whittling. “It’s cranky,” he says of the block of wood, “as Henry would say.” A couple comes in: “We saw the ‘art’ sign.” Feather George welcomes them and says, “Most people ask if I’m ‘Art’ and I say no, but I could be.” Here, in this place that Henry Nolla built, art lives.