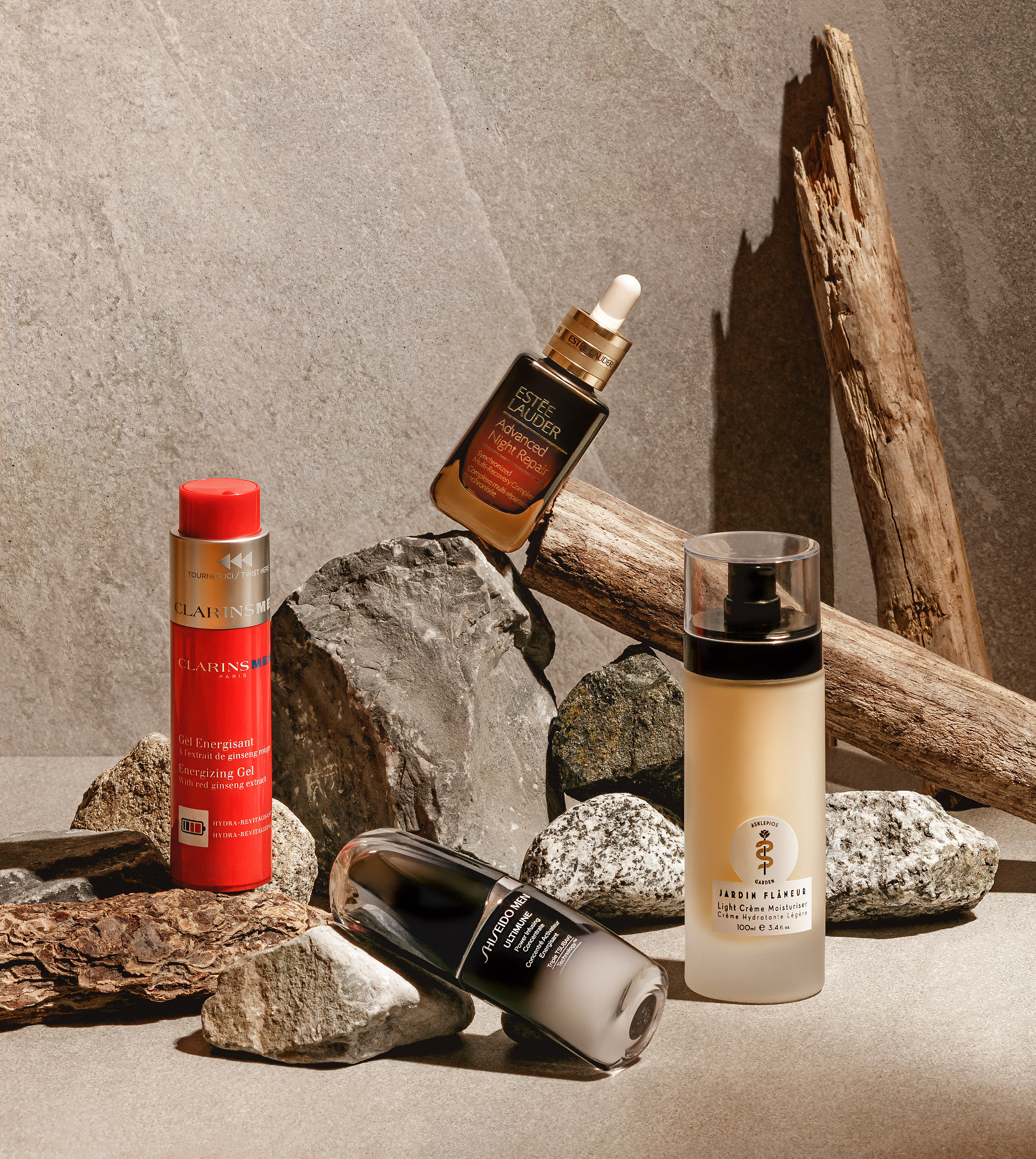 On the gridiron, NFL player Laurent Duvernay-Tardif defends against the blitz, but off the field, he guards against a different threat. The hulking 320-pound, 6-foot-5 Canadian guard for the Kansas City Chiefs is all in on protecting his skin. “I’ve always been a big advertiser of sunscreen in the locker room,” he explains. And the Quebec-born player, who grew up near Montreal, knows what he’s talking about—he holds a doctorate of medicine (and master of surgery to boot). Duvernay-Tardif has been leading the charge on the beauty industry’s latest boom: men getting serious about skin care.

As an ambassador for French beauty brand Clarins and its recently launched Energizing line for men, the unconventional skin-care advocate now has a platform from which to inspire more people to come to the table—or, in this case, the medicine cabinet. ClarinsMen’s new Energizing gel and eye gel contain extracts of organic red ginseng, bison grass, and gymnema that help stimulate the skin and boost its energy production. “At one time, in order to be a strong man, you had to be tough, but now it’s changing; you can fit the idea of masculinity and still take care of yourself,” he explains. “And it makes sense to take care of it because our skin is our largest organ.”

Catering to men’s epidermic needs is at the heart of Masc Skincare, a men’s beauty and grooming boutique in Yaletown. The pint-sized boutique opened 14 years ago but has since grown to carry over 75 different brands—with sales recently exploding. “Back when we first started, there was definitely a different connotation towards skin care, which was you had to be either metrosexual or gay to take care of your skin,” co-owner Patrick Levesque says. But it wasn’t until the pandemic that a broader range of men took note when their lifestyles were upended. “Suddenly people had more time than they ever did before,” he says. “And for many, COVID was the first time they’d ever had permission to look after themselves.”

This past year and a half has afforded fathers, sons, brothers, and beaus everywhere not only the time to look in the mirror but also a new perspective. “A lot of us are working from home, and for many, being on video has skewed our own perception—and men are not immune,” says Christopher Novak, vice-president, beauty, at Holt Renfrew. He adds that men have long participated in the idea of health, looking after their skin with SPF, exercising, and wanting to put their best self forth, “but the pandemic has accelerated it.”

Holts recently announced its new science-based sustainable initiatives, under which the heritage retailer will reduce emissions to levels consistent with the Paris Agreement, with two-thirds of its suppliers required to meet the same targets. With more men spending time on their devices, they’re also better able to research and understand what goes on their skin and why. And Holts is listening. “With clean science, the products have come a long way from being just soothing to actually being effective,” Novak says. The company plans to add more men’s brands, with 90 per cent of them already formulated with clean ingredients.

Along with cleaner ingredients, inclusivity is also at the heart of changing conversations around male skin care. Vancouver-based Asklepios Garden is a new luxury unisex plant-based line created for men, women, and gender non-binary people. “I always felt a bit alienated by how everything in our society is marketed to a binary of the hyperfeminine woman and the masculine man,” founder Nicholas Bradford Fritz says. “It was really important for me to bridge that gap and to create beautiful, nutrimental, and sensorial products that men, women, and all gender non-binary people can take pleasure in using.” He credits the success of his vegan skin-care stable to fashion houses and media that have been expanding the concept of what gender is. “We’re seeing the LGBTQ community being represented in a more authentic manner than the stereotypical tropes of the past,” he says. “Young people today are proudly presenting their preferred pronouns to the world—the shift is happening and it’s here to stay.”

Big brands are taking note of that inclusivity. “At the beginning of COVID, we noticed a trend with more men reaching out to us about skin care and serum requirements,” says Taryn Fisher, director of communications for Estée Lauder Canada. Estée Lauder responded by launching social media campaigns featuring a cross-section of males applying and talking about the benefits of the brand’s Advanced Night Repair. Shiseido also launched a new men’s cleanser, moisturizer, and “power infusing” concentrate this past summer.

“Both demand and inclusivity are driving forces for men’s skin-care innovation today, and the global market is showing 4.7 per cent growth and expected to rise to 6.3 per cent from 2021,” says Eijiro Hara, a researcher at the Shiseido Global Innovation Center in Yokohama, Japan. But he points out that this isn’t just a trend: “it’s a new lifestyle of self-love and inclusivity.”