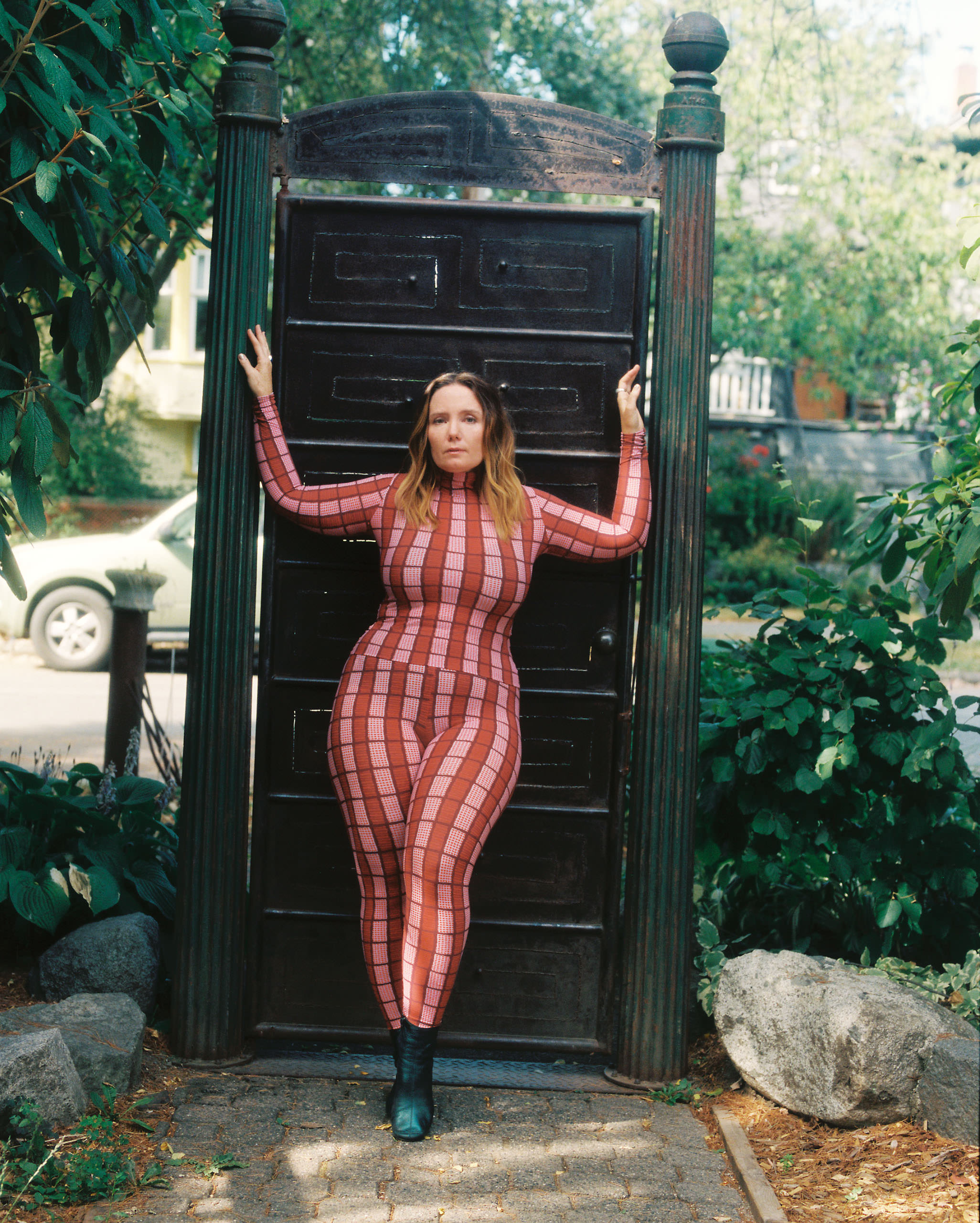 Frazey wears Henrik Vibskov top and leggings from The Block; shoes Frazey’s own; jewellery worn throughout, Frazey’s own. Original photography for MONTECRISTO Magazine.

Frazey Ford stands in a garden bed holding a shovel, enveloped in a cloud of puffed sleeves, ruffles, and skin-tight sequined pants. “This is strangely normal,” she laughs. “I’m always doing everyday tasks in the most inappropriate outfits.”

The garden is magical, one of those spaces where you can’t escape the creativity of its guardians: there’s a pole made tree-like bearing teapots in place of fruit; among the rakes and tools hangs a trombone; under a wooden frame covered with a huge white tarp sits a wood-burning fire and a piano. “We call it the palazzo,” Ford says of the structure built to enable safe social gatherings through the past 18 months.

The garden surrounds a sprawling, multi-tenanted East Van mansion painted cobalt blue. The indie singer-songwriter known for her bluesy, soul-inflected folk has rented an apartment here for almost 18 years, since her son Saul was just six months old. There’s a music studio belonging to the owner (“he was part of an ’80s band that was pretty popular”), and his artist wife’s flair is baked into the bones of the place.

It’s exactly the kind of space in which one imagines Ford living: her music videos are invariably shot around the neighbourhood, her friends providing back-up dancing and assorted other roles; this inherent communality and organic bohemia fits her like a glove. 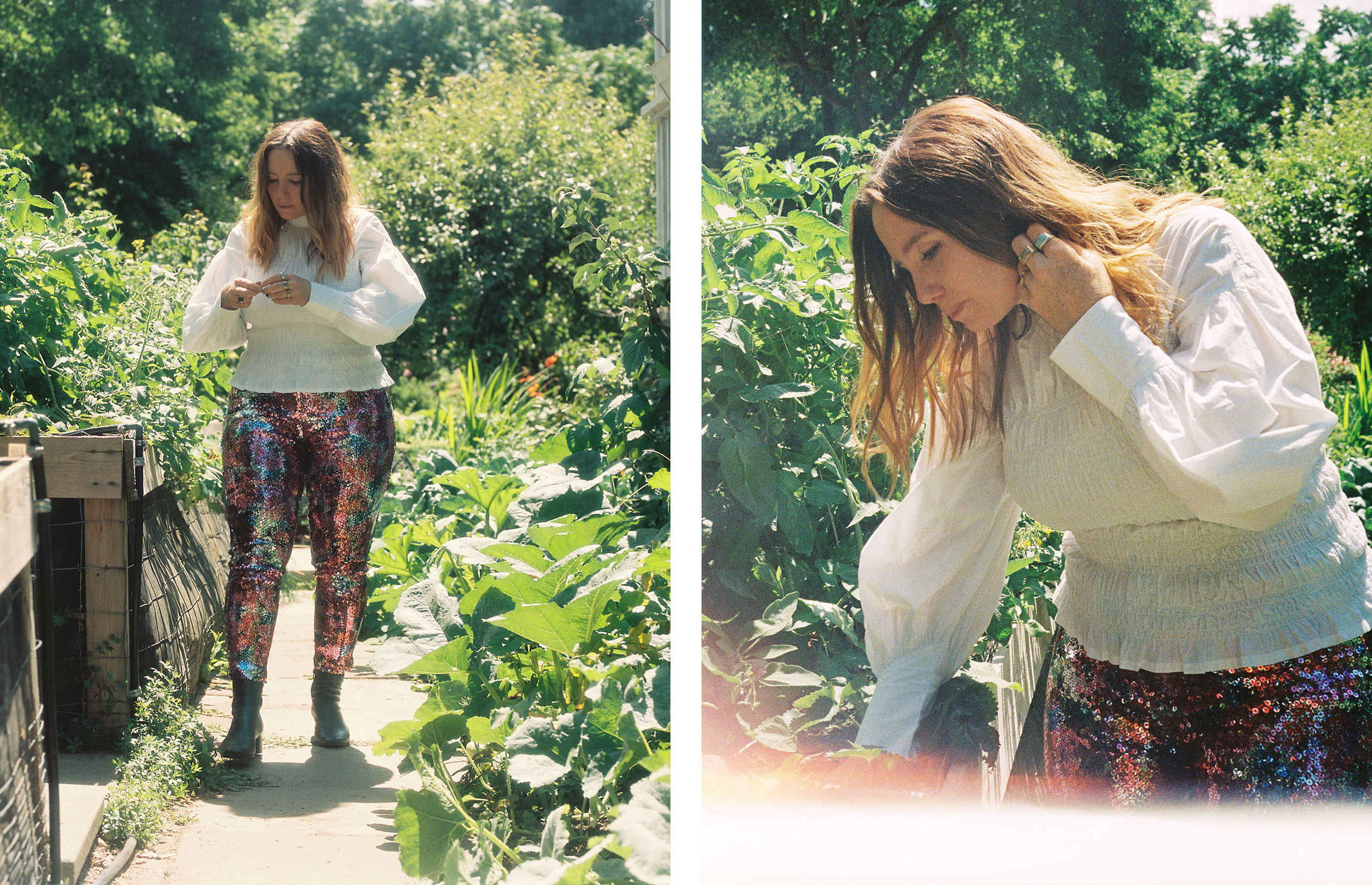 She arrives for our interview in a bright-red jumpsuit covered in a print of full-figured gals running. Fabulously hourglass herself, Ford’s style is a combination of fun and ferocity; I challenge you to watch the video for her song “Done” and not aspire to walk down the street rocking a look that hard. “To me it’s the first art expression of the day—putting together an outfit, putting together a look,” she says as we sit down for a chat surrounded by flower beds filled with kale and sunflowers and everything in between. “It’s how I feel a sense of, this day is going to be good: I’m wearing this.

“I derive so much pleasure from clothing and even the attention I get from wearing clothes,” she adds, a peal of bubbly laughter punctuating the admission. “When I’m walking down the street wearing something bright on a grey day, it makes people feel free: here is this woman with a non-skinny body type wearing whatever she wants. And then just the colour—colour brings people joy.”

I tell her how enviable that confidence is, and she smiles generously. “To me, it’s like, why waste time? We don’t necessarily have that much time, so why have less fun when you could have more fun?”

It’s an admirable attitude and one she comes by honestly. If you have listened to her work, you know Ford has not had it easy. She grew up in B.C., born into an American family marked by politics and poverty. Her parents fled to Canada after their resistance to the war in Vietnam aroused the interest of the FBI—at one point, they were protected by the Black Panthers. Her eldest brother was born in Denver, Colorado, when her mom was just 16 (“Babies with babies. Also pre hippie days,” she wrote recently under an Instagram post of a photo taken when her brother was an infant); eight years later, in 1973, Ford was born—the fourth and youngest child. 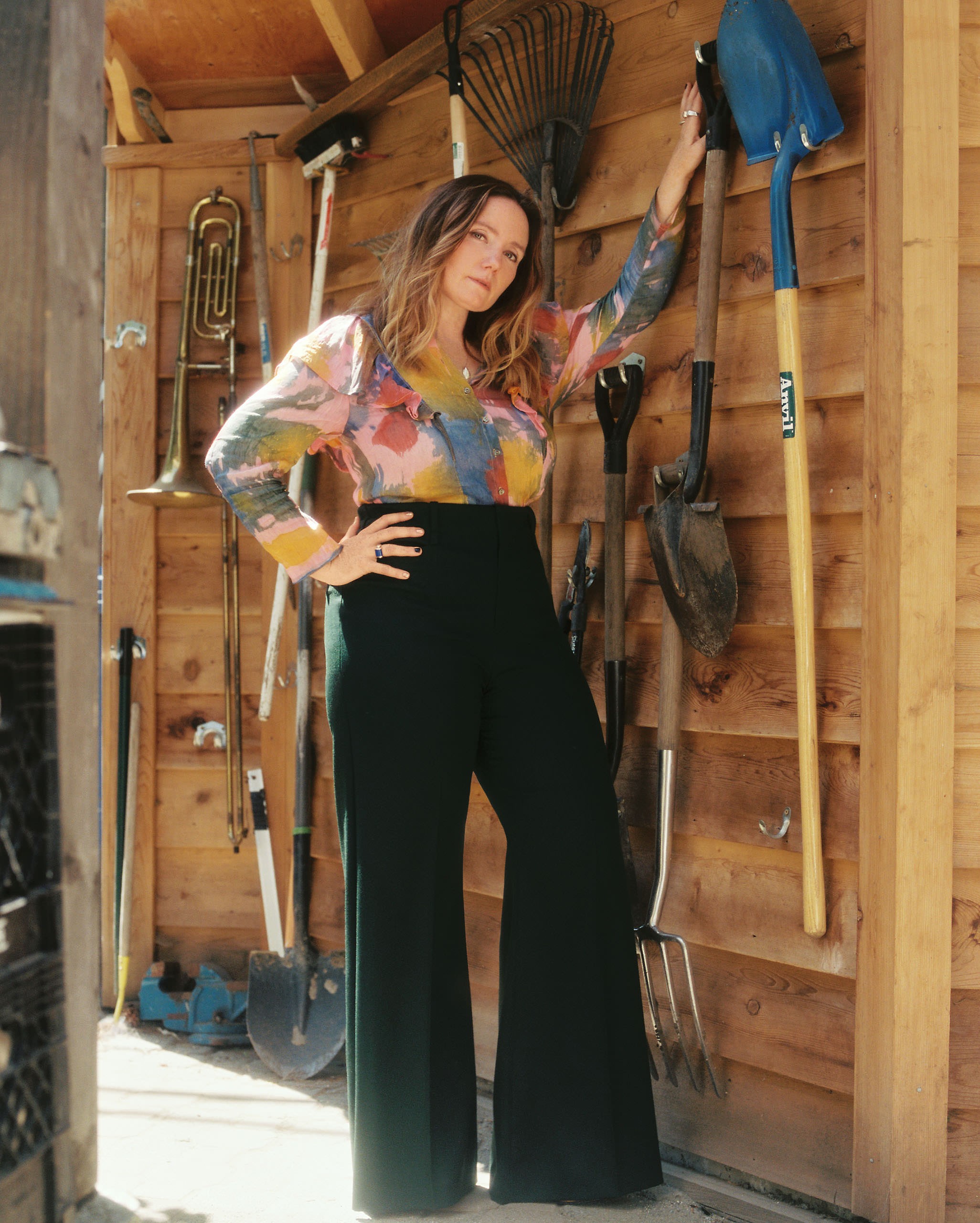 It was anything but an easy upbringing—there was abuse and violence, and they were poor, Ford says, but that’s not, of course, the whole story. “The parents I grew up with were,” she tells me, “complicated and amazing. Like everything, it’s nuanced—we had a lot of great times; they were very politically inspired, my mother took us travelling all over the world as kids. But their dynamic was pretty toxic—they both came from difficult backgrounds.”

The complications intensified a decade ago when Ford discovered her biological father was not the man who had raised her as his daughter. She met her biological dad a few years later (he has since died of cancer) and, in the process of getting to know him, gained four younger brothers and a whole other family.

And just like the family she grew up with, there is nuance and complication: her found family is wealthy. She recounts a conversation with her father before he died in which he expressed surprise her mom didn’t have a nanny to help with the kids. “My mom was working class. She had left her family, who were Republican and giving her zero support, and she had to pull herself out—all of us—out of complete poverty,” she says. “Meanwhile, my biological family are very privileged people who were living the hippie life from a very safe place, and for them it was zero risk.

“My mom was working class. She had left her family, who were Republican and giving her zero support, and she had to pull herself—all of us—out of complete poverty.”

“But they are so similar to me,” she says, a sense of still-fresh wonder in her voice. “There are so many things about me and my son that suddenly make sense now. The first time I walked into my biological aunt’s house, I felt like I was walking into one of my own parties, it was so familiar. It’s very wild.”

Against this less-than-ordinary background, Ford has quietly carved herself a significant musical niche. She may not be a household name exactly, but she has a sizeable and enthusiastic fan following—many of them in Europe and the U.S.—and her three solo albums (the latest, last year’s U kin B the Sun) have all been well received critically. Her first brush with fame came with the Vancouver folk group Be Good Tanyas, but in this solo career Ford has matured musically and lyrically. Her sound is her own, with a voice that paints emotion, somehow fully encapsulating rather than simply articulating thoughts and meanings. She sings of pain and joy and love and strength. She gets under your skin. 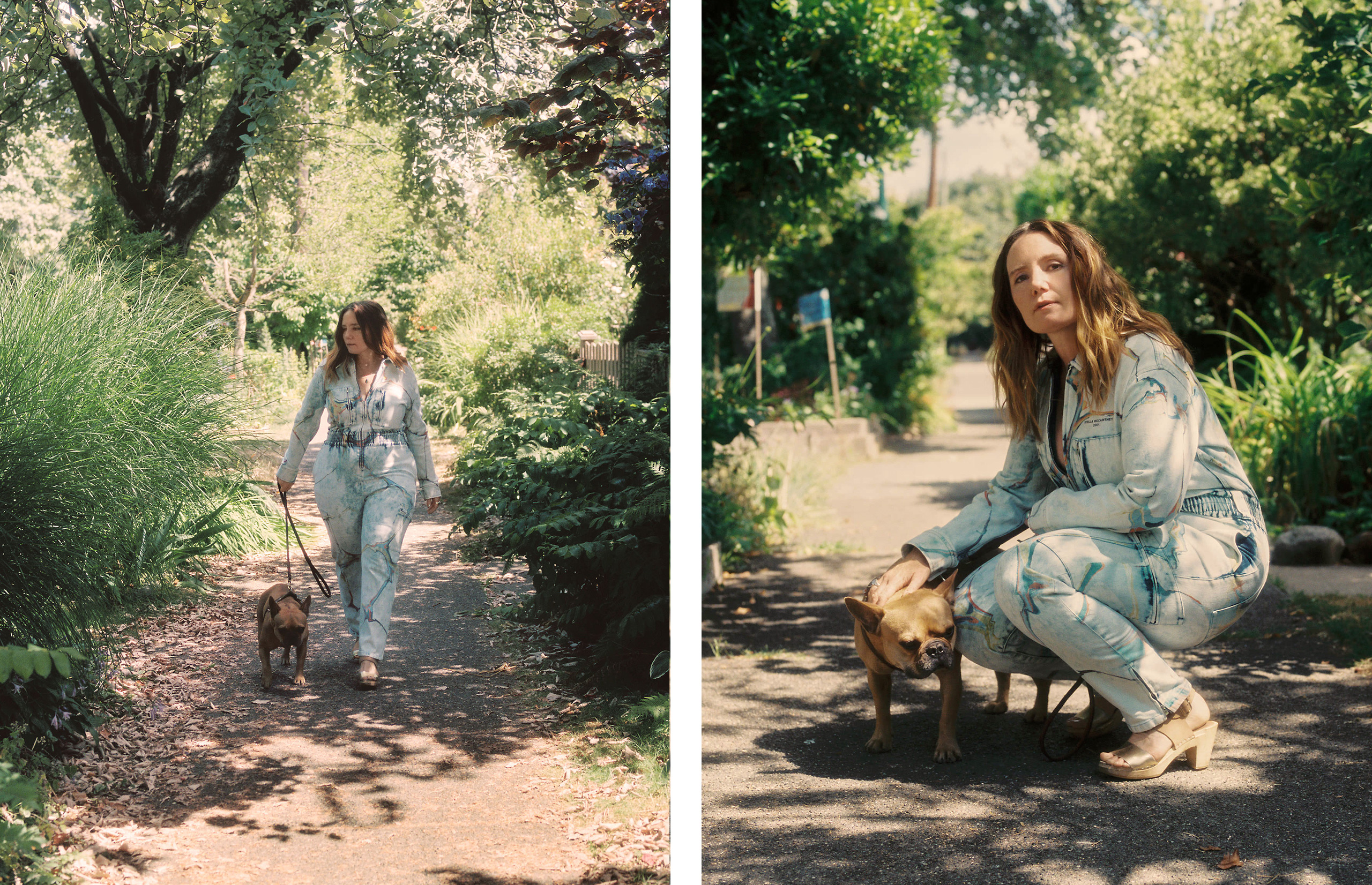 “For me it is always an exploration,” she says when I ask her how she defines her sound. “I don’t necessarily stick to what’s familiar. When I’m playing around and trying to figure something out, something will appear that feels like a fresh riff or something, and that’s what I am drawn toward.

“With the first album [2010’s Obadiah],” she continues, “I am obsessed with soul music, but I come from this tradition of folk writing and I became really fascinated with how to merge these two sounds in a way that was new and meaningful for me.”

The soul connection fully manifested in her 2014 follow up album, Indian Ocean, recorded in Memphis with Al Green’s old band, now the Hi Rhythm Section. Then, right before the world ground to a halt, came U kin B the Sun, another progression, darker than before, a little angrier maybe. Gone is the sunny Memphis soul, in its place a more prominent bass line. It feels as if Ford is stepping forward, reclaiming space. “It involved me letting go of a lot of control,” she nods. “A big part of why we, as four women, formed the Be Good Tanyas was to create this safe quiet sound, and I was always afraid to let musicians override that. With the last album, I let the band loose and allowed co-writing and just let that energy flow.”

“I am obsessed with soul music, but I come from this tradition of folk writing and I became fascinated with how to merge these two sounds in a way that was new and meaningful for me.”

Recording the album was an emotional roller coaster: midway, Ford’s second-eldest brother, Kevin, a long-time addict, died unexpectedly. Two weeks later, her biological father told her he had terminal cancer. She started the extensive U.S. and European tour as planned, but four shows in, the pandemic closed it down (the U.S. and U.K. have been rescheduled for this fall, Canada and Europe in the new year).

And just a few weeks earlier, The Times of London published a profile focusing on the abuse she suffered as a child. What was written was, she says, sensationalized and oversimplified. “It was kind of intense that it came out like that,” she says, her face tightening a little. “It was one of the biggest pieces of press I’d ever gotten, and we didn’t talk about it that much in the interview, and he really made it the whole focus. They even requested a different photo—they wanted something with me looking more sad. 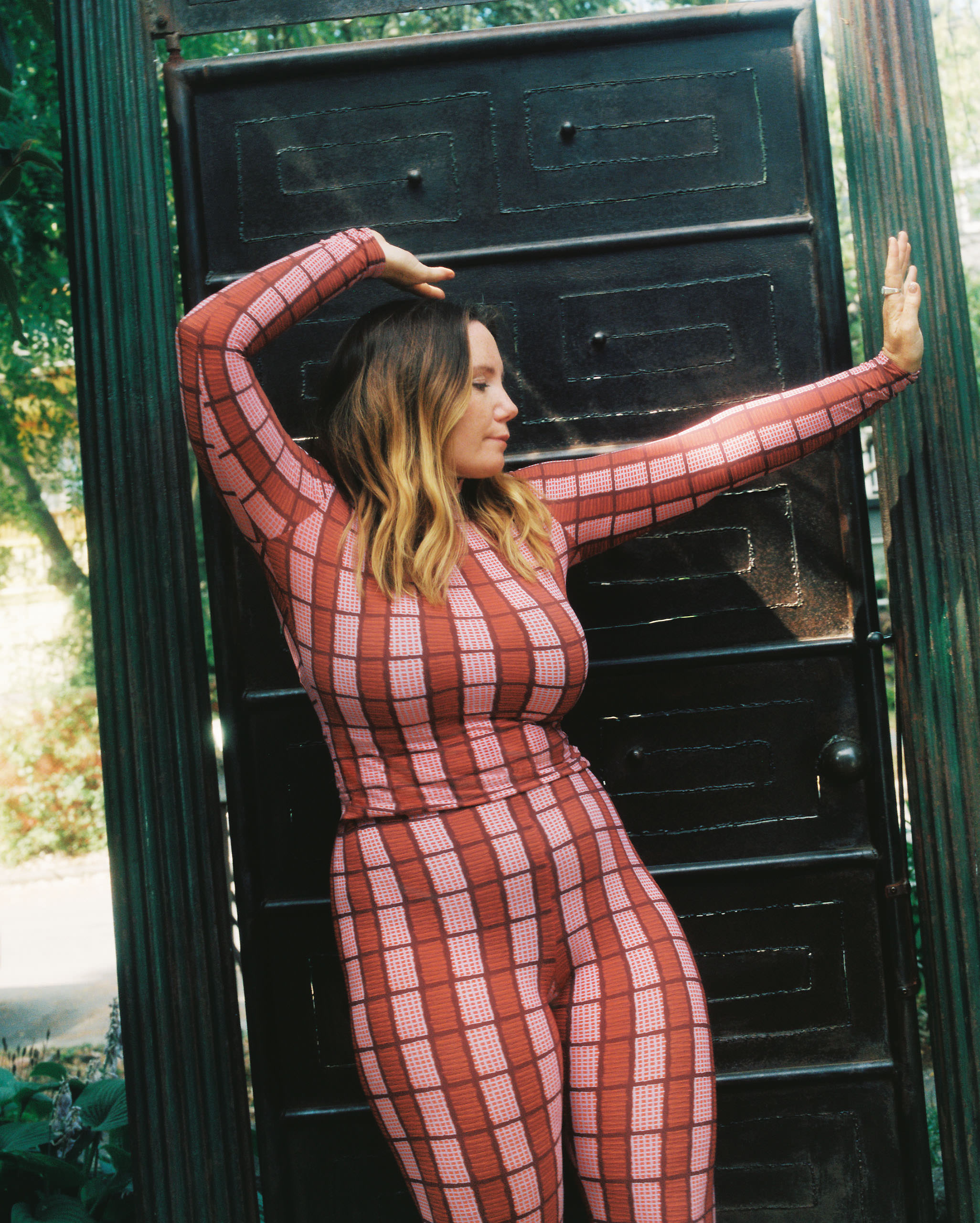 Frazey wears Henrik Vibskov top and leggings from The Block.

“I’m happy to talk about the fact that I’ve had this experience,” she continues, “because I would say at least half of the women I know come through some kind of abuse, and I feel it is important to normalize the experience. I also think I’m old enough and I have enough self-esteem to do that.

“But our society likes to view women as victims, and I absolutely do not view myself that way,” she adds. “He was like, ‘you can tell from this album she’s been through this thing,’ and I’m sorry, you can tell from the beginning of my artistry that I’ve experienced hard things. And that’s a big part of why I became a musician because that beauty is what helped me to survive. To me it’s a triumphant story.”

She’s right: it took a lot of hard work to come into her “warriorship.” And through it, she has raised a son, established her community, and used all the natural creativity that bubbles beneath her skin to make art: ceramics, paintings, clothing, and of course, amazing music. “When we started Be Good Tanyas, I think I felt a lot more tragic, and the pain I felt was deep in me,” she recalls. “There was more tragedy and wistfulness in my music.

“But I’ve come through and found my own wholeness, and I feel like the last album is much more embodied. I can own the anger or the clarity or the sexuality,” she says, lifting her head and opening her beautiful, heavy-lidded eyes a little wider. “It’s more direct.”