Standing on the beach of SGang Gwaay, an island in Haida Gwaii, silvery cedar mortuary poles are backdropped by lush green rain forest. Carved more than a century ago, they testify to the Haida people’s relationship to land and sea as they slowly disintegrate into the earth. Visiting this sacred place and UNESCO World Heritage Site is a highlight for passengers aboard Outer Shores Expeditions’ schooner Passing Cloud, but a few nautical miles away in an uninhabited inlet, a beachcombing excursion reveals another kind of modern-era monument: plastic trash in the form of bags, bottles, buoys, lighters, crates, snarls of fishing rope, and even a drill-set box.

Beauty is abundant in B.C., but so is marine debris. With 25,000 kilometres of Pacific Ocean coastline and a confluence of currents, the exposed shores and funnel-like inlets are depositories for plastics that are spinning off the Great Pacific Garbage Patch or are still drifting from Japan’s 2011 tsunami, as well as the flotsam of a staggering 348 million metric tons of plastic produced annually in the world. The glut of garbage is so great that disturbing new entities are appearing, such as the styrofoam midden—a startling discovery for Russell Markel, founder of Outer Shores.

“That’s new in my vernacular,” says the sea captain who has a PhD in marine ecology. And it’s just one troubling find in the 127,060 kilograms of beach-cast trash collected during the pioneering Marine Debris Removal Initiative (MDRI) that Markel helped co-lead last summer when tourism tanked due to the COVID-19 pandemic. 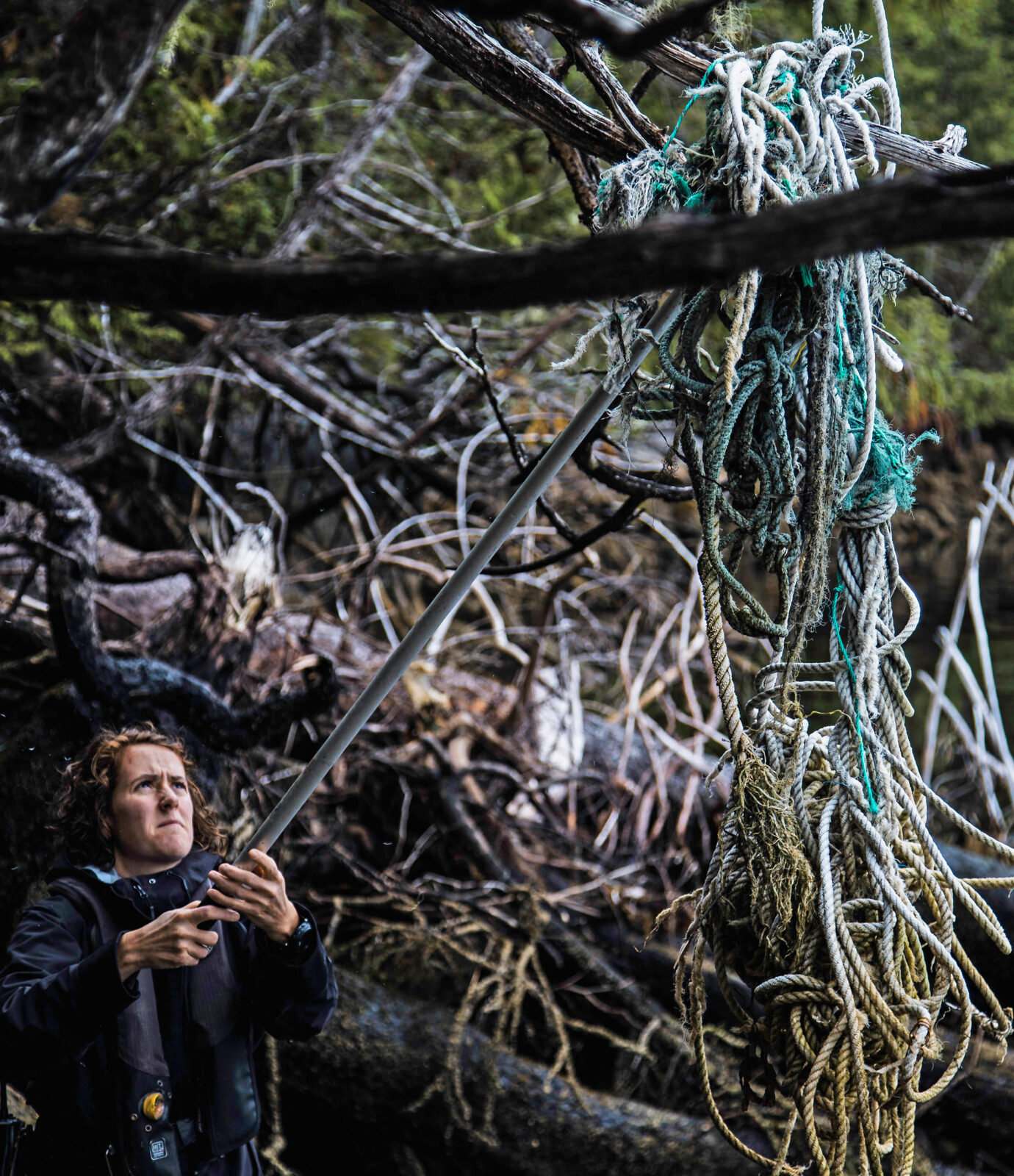 “Sadly, anything and everything that’s made of plastic can be found along the outer islands and shorelines of British Columbia.”

As a scientist, Markel studies human impact on marine ecosystems, and as the owner of a tour company, he sees that impact in the field on sailing expeditions. It’s something all the members of the Small Ship Tour Operators Association (SSTOA) of B.C. have long been aware of. With their vessels indefinitely moored in the lost 2020 season, the seven member companies brainstormed over Zoom and came up with a project to support their crews and also tackle the rising tide of marine debris.

It was an opportunity to not only provide work to 111 crew members but to also give back to the coast, Markel says. “Our businesses and livelihoods depend on having healthy, beautiful, and functioning ecosystems.” It was also crucial to collaborate with local Indigenous communities. The MDRI worked closely with the Wuikinuxv, Nuxalk, Heiltsuk, Kitasoo/Xai’xais and Gitga’at First Nations and employed 69 community members. “We were not going to do this project unless we had full support from the First Nations in the areas in which we were operating,” says Eric Boyum, captain and owner of Ocean Adventures Charter Co. 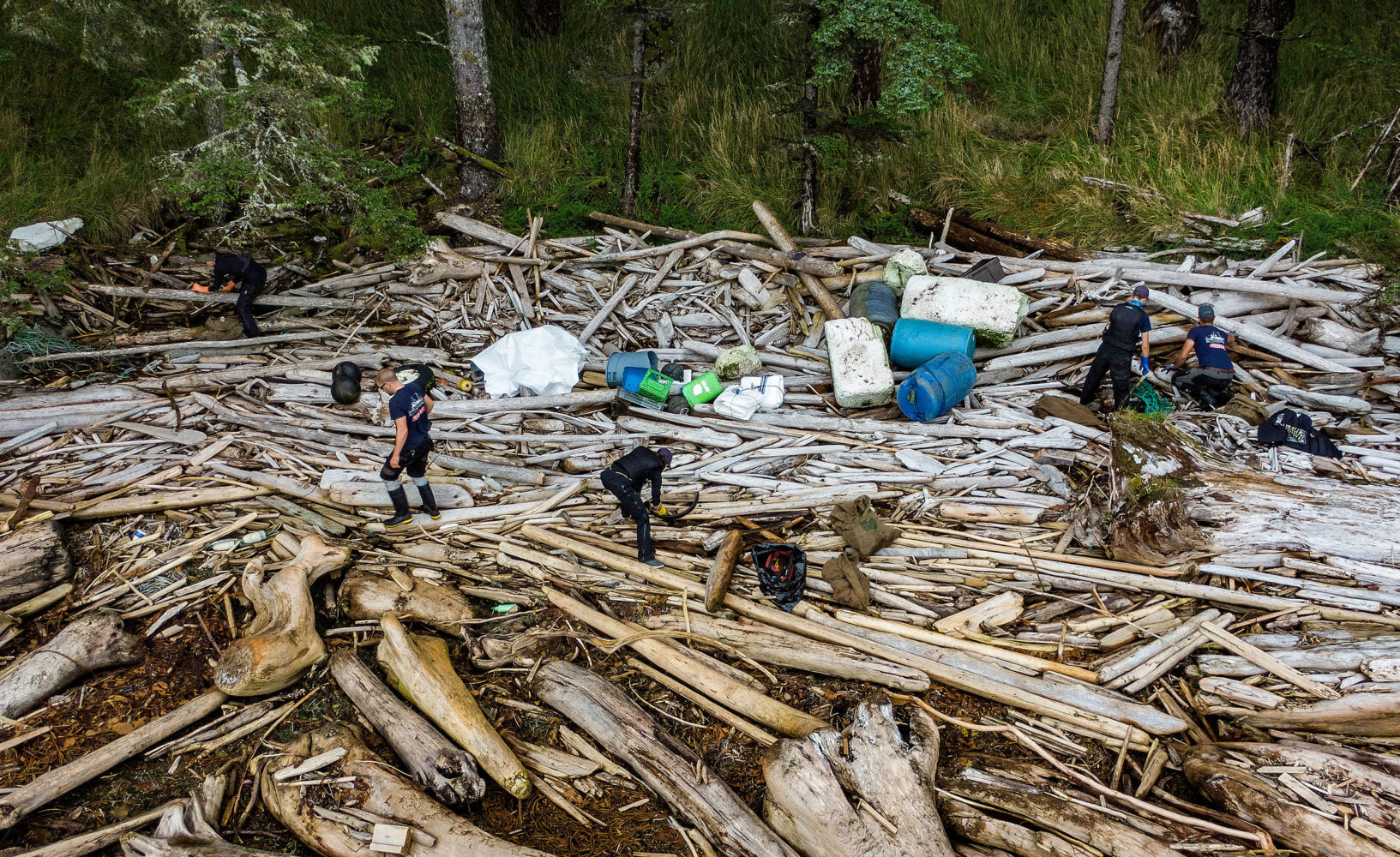 The association worked with the nations to coordinate cleanup on culturally sensitive sites and provide transport services. An Indigenous-owned tugboat and barge company was MDRI’s single biggest contract, Boyum says, and “a great way to be putting money back into the community … and where many of us have been working for decades.” The far-reaching collaboration brought far-reaching results. “For the first time in my lifetime, the beaches of some of our most sacred sites are free of plastic, garbage, and fishing gear, thanks to this initiative,” says Doug Neasloss, stewardship director with the Kitasoo/Xai’xais Nation. “Our lands and waters are lighter now—and the benefits will flow beyond our community and guests to the wildlife who depend on the health of the shoreline.”

Of the 127 metric tons of marine debris collected, more than 50 per cent was derelict or “ghost” fishing gear. “It’s called ghost gear,” Markel says, “because it drifts and kills animals, birds, fish, and marine mammals, gets weighed down and sinks, and all the stuff rots, and then it floats back up and resumes killing. It’s a really horrific form of marine debris.” Boyum was shocked by the number and sheer size of the fishing nets they found: “We actually laid out a couple that could fully encircle a full-grown humpback whale.”

Some of the other garbage: plastic barrels and pallets, mattress-size styrofoam, car tires, buckets of epoxy and industrial glue, fuel cans (some still full), sports equipment, toys, shoes (from flip-flops to rubber boots), single-use plastics (from zip-lock bags to ubiquitous water bottles), and even the head of a mannequin, which the crew kept as a mascot. As Markel says, “Sadly, anything and everything that’s made of plastic can be found along the outer islands and shorelines of British Columbia.” 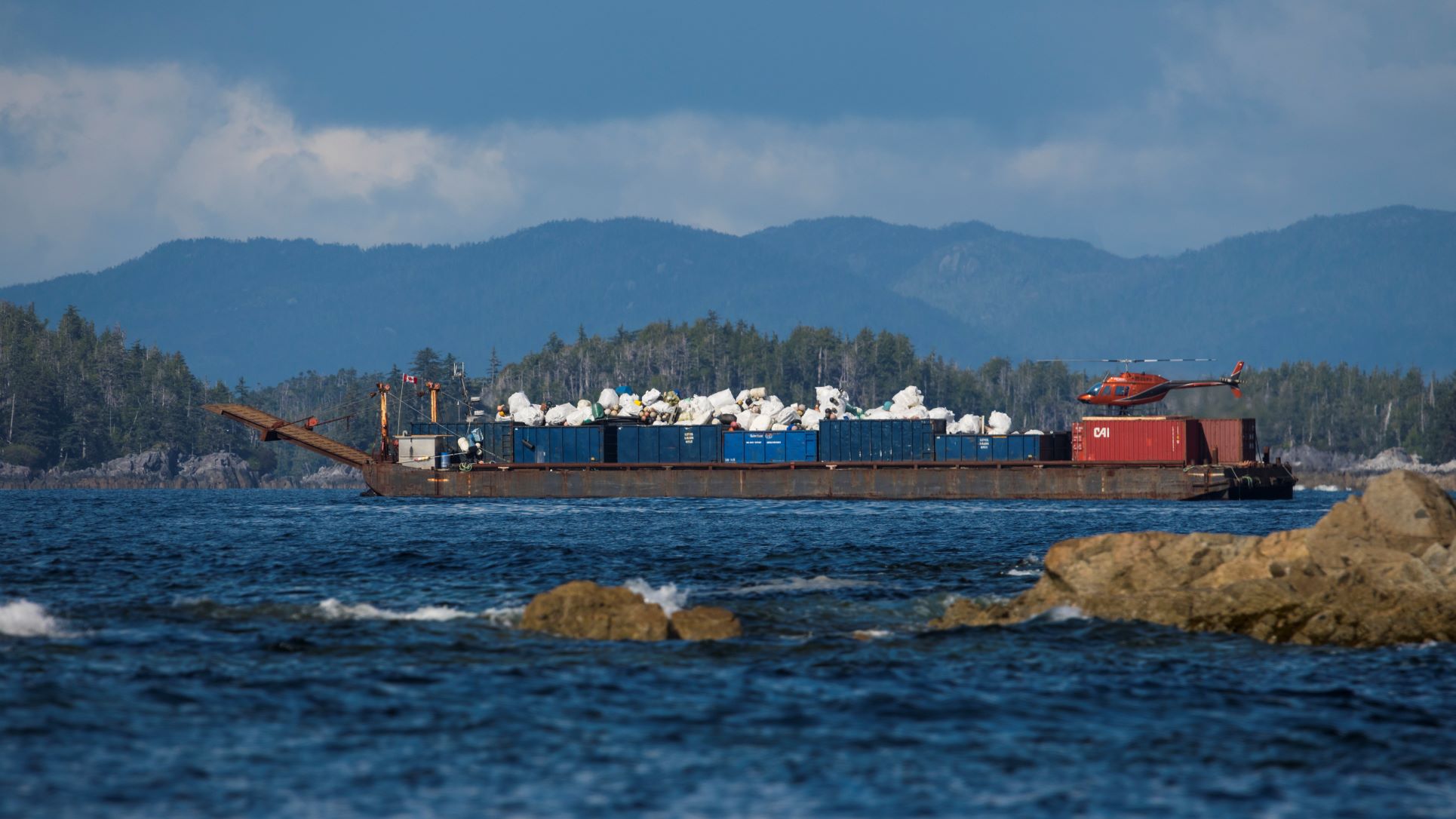 The MDRI removed 127,060 kilograms of derelict fishing gear, plastics, and consumer garbage from the outer B.C. coast. A helicopter helped move debris from shorelines to a tug and barge.

The hope is that by tracking and documenting the marine debris collected in this unprecedented cleanup, the data (and MDRI’s final report to the government) will lead to solutions. Fishing gear can be redesigned, Markel says, made identifiable to trace back to specific countries and fisheries, and even recycled. Most of what MDRI collected in 2020 ended up in landfill (one happy exception: the Heiltsuk First Nation reused hundreds of floats for a herring spawn-on-kelp fishery), but with new recycling centres (B.C.’s first ocean plastic depot just opened in Powell River), this year’s proposed goal is to recycle 80 per cent.

With the 2021 touring season uncertain, another MDRI launched the first week of May. “We’re tourism businesses, not marine-debris-removal businesses,” Boyum says, “but we were able to pull an incredible amount of debris off an area that had never had a proper marine debris removal in history.” The small-ship tour operators’ efforts will continue. “We’re able to provide direct experiences with place and wildlife and nature that really turns things for people,” Markel says, “helps them understand what’s out there and what’s to lose if we don’t make changes to how we manage plastic or how we address the climate crisis or if we don’t think about sustainability in fishing when purchasing seafood.”

Knowing that styrofoam and plastic-water-bottle middens now exist is epoch-defining. Our relics of refuse are a “new form of pollution being enmeshed with nature,” Markel says, building up and breaking down into microplastics that reenter the food chain in a diabolical loop. We’re ingesting our detritus and leaving a troubling legacy. But a project like MDRI is building something else too: awareness. And the chance to make beachcombing benign again.