In the 1980s, a tree began to grow in the rich soil of coastal British Columbia. The western red cedar would grow tall and sturdy like its ancestors, trees that had inspired generations of Indigenous carvers. The beautiful, durable wood also inspired modern architects building West Coast homes, including John Porter who, in the late 1950s, used red cedar in the Deep Cove home of James Bligh’s grandparents­—a home where James’ father would grow up, family wedding receptions would come and go, and a teenage James would slide around on the smooth cork floors. As an architect himself, Bligh would one day find this particular tree and incorporate it into a modern condominium, a tribute to his childhood home and its red cedar walls.

Bligh didn’t want his family to feel they were giving up something by moving from a detached house to a condo. The panelling on the condo walls was milled from a single western red cedar.

The Deep Cove home’s design, Bligh remembers, was centred around the social rooms of the house, with living spaces on both sides of the kitchen and a generous patio with views of the inlet. “It was certainly a machine for living,” he jokes, “but this house was also a machine for partying.” It had floor-to-ceiling windows and features such as a built-in ironing board, hallmarks of the modern home that Bligh did not fully appreciate until architecture school. By the time he graduated in 2015, the house had been sold.

“Everyone was very familiar with the house, but they were getting older, the house had stairs, it was far from a lot of amenities. And they weren’t going to be able to age in place,” he says.

His parents, Ross and Elizabeth, bought an apartment in Shaw Tower in downtown Vancouver. Their choice focused on the lynchpin of West Coast modernism and a craze in Vancouver commonly known as the cult of the view. But, despite the view—a panorama from Harbour Centre’s circular Lookout tower to the sail-covered convention centre to Stanley Park and the mountains beyond—it became obvious to Bligh that something was missing.

“Whenever you live in a space, you slowly build up memories of that place. And as sad as it is when that place is demolished, you get to keep the memories—which hopefully inspire your life in the next home,” he says. He wanted to reimagine the condo in a way that recalled the modern family home.

“Whenever you live in a space, you slowly build up memories of that place. And as sad as it is when that place is demolished, you get to keep the memories—which hopefully inspire your life in the next home.”

“But how do you do that when you’re 36 floors up in the air, as opposed to being embedded directly in the landscape? That was the design problem that I was trying to address.”

Additionally, he wanted to add small, functional details that would aid his parents in little ways, a practice in accessibility, which is not always considered first in modern homes.

Bligh worked closely with with cabinet makers Intempo Interiors to fine tune the panels and work through detailing respectful to the original house with the wood available.

Bligh describes himself as a black sheep in the family; his parents are both musicians and avid sailors, while he concerned himself with works of structural engineering and architecture. In the reimagined condo, Bligh’s eye for materials and function transformed what was a typical condo with a remarkable view into something truly special.

The first step was to open up the view by removing a chandelier and fireplace. Then he found that single red cedar that had been growing for decades in Mission and had it quarter-cut to best maintain the tree’s individuality. This sawing method keeps the pattern of the branches visible. 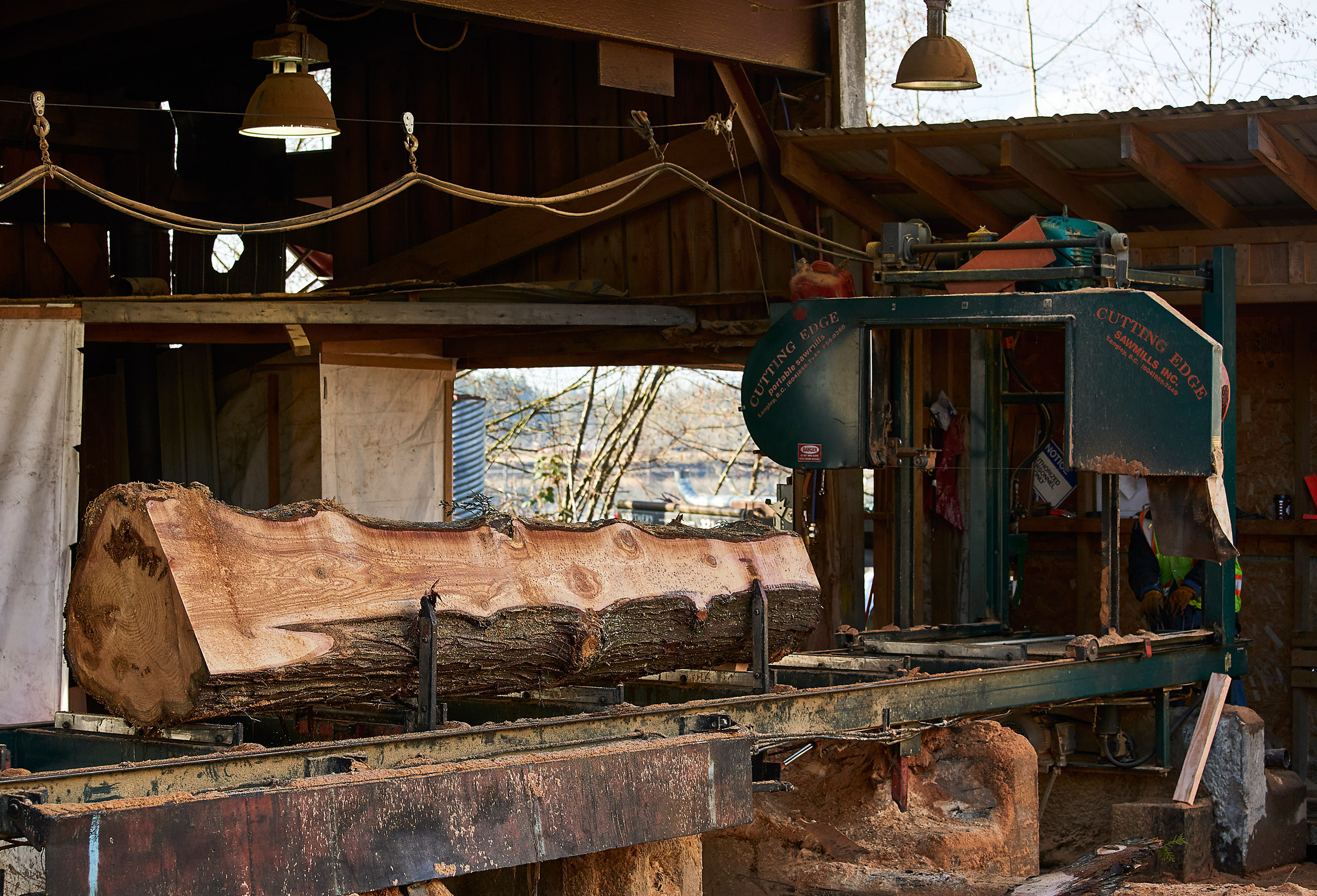 He spent hours arranging the milled panels, creating the impression of branches rising and falling gently across the wall like sheet music, a subtle homage to his mother, who was the principal harpist of the Vancouver Symphony Orchestra for 30 years.

The wood connects the family to the old house but also to the exterior and to the legacy of cedar. Bligh thinks it’s important that the type of wood inside the apartment is the same as the forests visible from the window. “Not even an illusion,” he says, “it’s a complete truth. There is a connection there.” 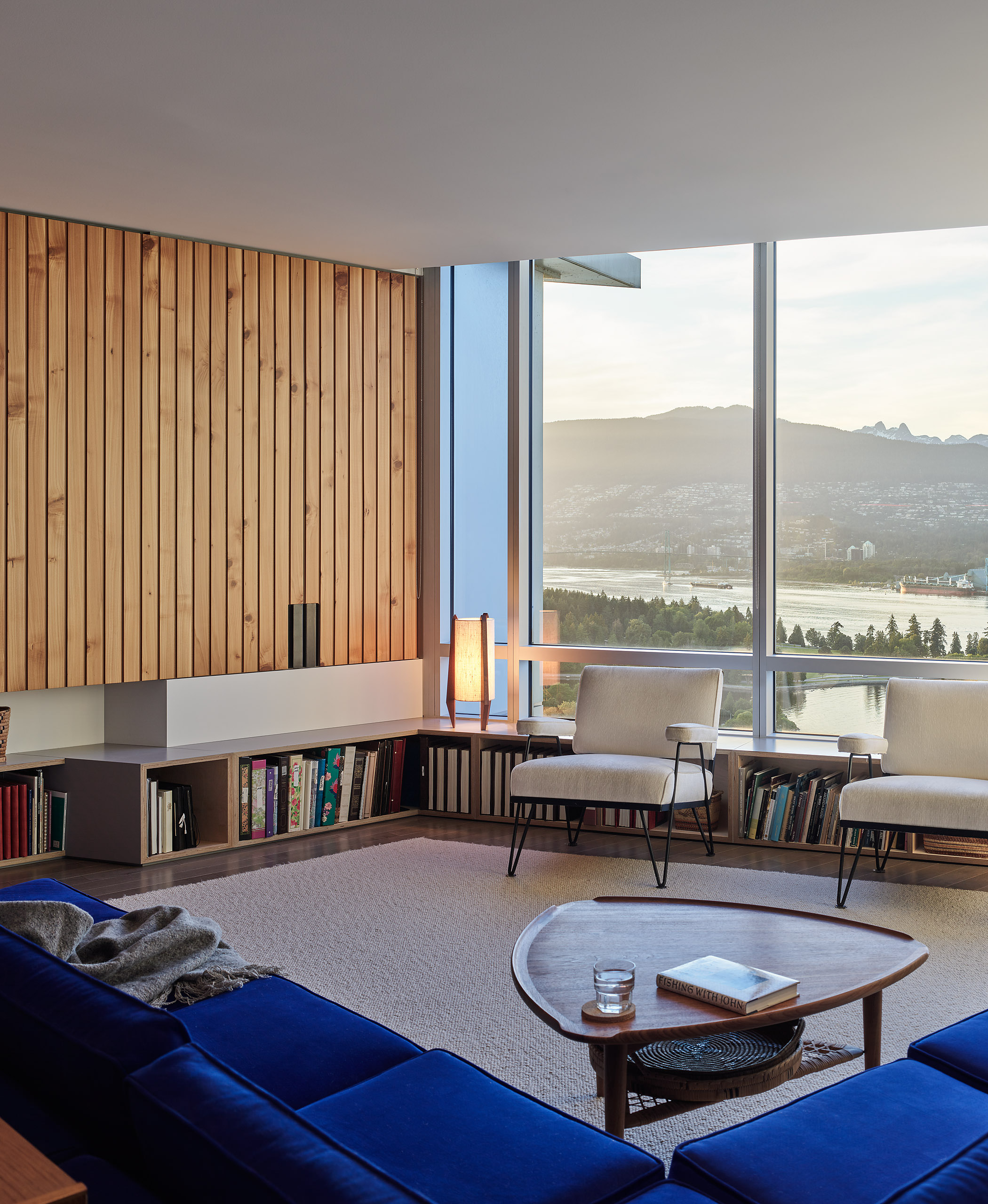 The panelling covers the whole living area and stretches seamlessly into the kitchen, hiding the microwave, a wine fridge, and a television, which can be pulled out of the living room wall. Raw steel handles are the only trace of the function. And function is everywhere, especially in the kitchen, where Bligh has thought of everything as only family could: Pegasus shelves with a simple pull-down mechanism to reach the upper cabinets, separators for the utensil drawers that recall his great-uncle’s handmade designs, and a custom sink wide enough that full baking sheets can be laid in it. He even included an insert into the side of the sink to hold sponges. “Clutter is one of the big killers of the classic West Coast modern house,” he smiles as he pushes the insert back into place. “With less visual noise, the eye may settle on the window more quickly.”

Another remarkable feature that orients the design is a set of lights designed by Propellor Studio. The massive bowl shades that retract with a pulley system in the ceiling also function as an amplifier for conversation at the table. Their interior colour, Traffic Red, was chosen to resemble firelight. 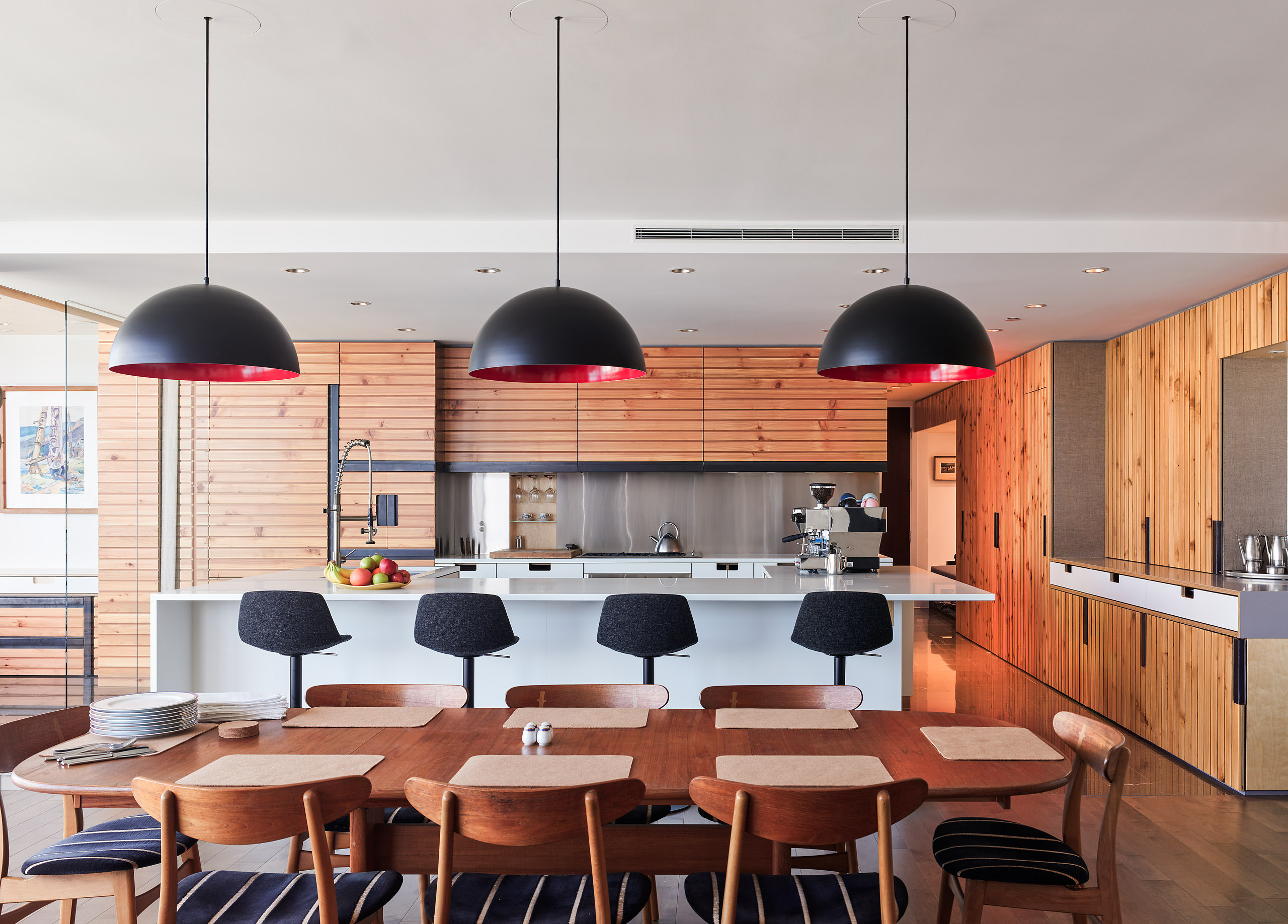 Neutral fabrics throughout evoke the natural-coloured wool of the midcentury modern home, while the ultramarine-blue couch, inspired by one in the residence of Bligh’s favourite architect, Alvar Aalto, enhances the the warmth of the wood walls.

Bligh has reframed the loss of his family home as an opportunity. “By bringing in some of the finishes and features and ideas of the old house into the new house, I was trying to make an argument that the memories associated with it weren’t gone because those memories had inspired a new home.”

Photos by Andrew Latreille, Courtesy of James Bligh. More from the Summer issue.