Life throws everyone curveballs. For Natalie Barlow and her husband, Martin Lampa, 2013 was the year the curveballs arrived hard and fast. Until then, the couple enjoyed the life of accomplished doctors with thriving medical practices. They were happy in their newish, if conventional, home in Vancouver’s Point Grey neighbourhood on a standard lot where, even after routinely putting in extra hours every week doing work they loved, they found time to have fun as a family with a toddler and a teen, and to entertain friends. Life was hectic, but it was good.

In March 2013, everything came to a crashing halt when Lampa flew head over handlebars in a bicycling accident that left him, after months in rehab, with a traumatic brain injury severe enough to trigger his early retirement from a successful career in anesthesiology.

“It was a big life awakening,” Barlow says. “Up until then, my husband was working 60, 70 hours a week. He was going to need to redefine himself,” which wouldn’t be possible in Vancouver where all their friends continued to move at top speed. The couple decided to relocate somewhere fresh. They landed in Victoria, where each had lived on their own in their twenties and loved it.

The lush half-acre plot they purchased in the historic Uplands neighbourhood is wide and deep. It has pronounced eruptions of craggy quartz rock at the front and a line of long-standing, eye-catching Garry oaks in the back, which separate it from the bright open fairways of Uplands Golf Club. Parked in the middle of this natural beauty was a tired mid-20th-century bungalow the couple intended to raze. 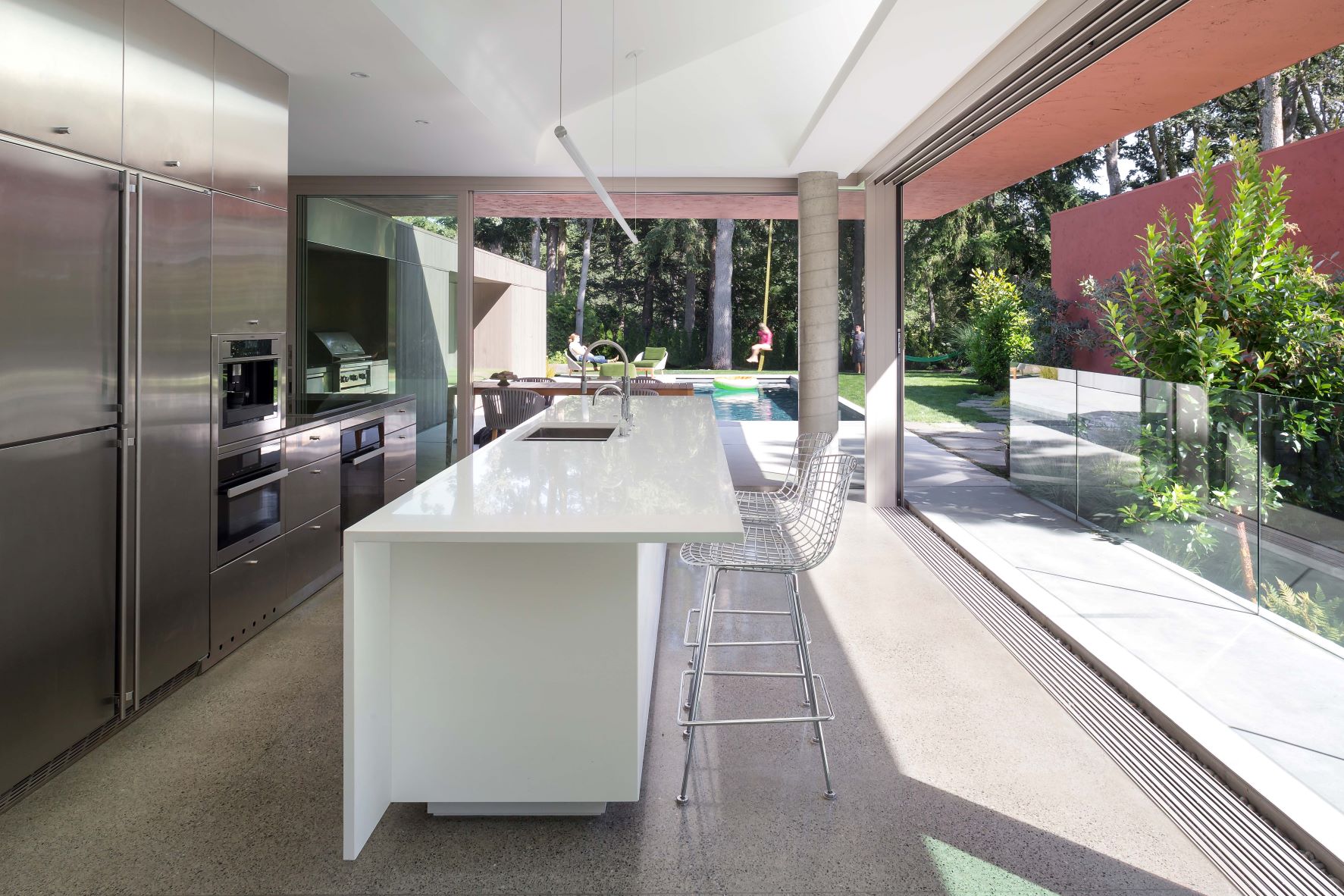 The designer they engaged to replace it is the much-admired D’Arcy Jones, a Vancouver architect whose work has been featured in both prestigious international professional journals and top home-and-garden pictorials where the editors have every house in the world to choose from. Jones, principal of his own boutique studio since 1999, has won multiple national awards. This fall, he will join the ranks of other celebrated names in Canadian architecture whose work has been published by Dalhousie Architectural Press. His monograph will explore 14 visually striking projects, almost all residential. The Lampas’ Victoria home is one of them.

The first thing that will surprise you when leafing through Jones’ new book is the dissimilarity of the designs. While the homes share common themes—strong, simple, modernist forms; balanced proportions; the pursuit of soothing natural light; references to neighbourhood and regional history—these are interpreted in largely unconventional ways dictated by client needs and wants, and the unique set of conditions and opportunities every site provides. 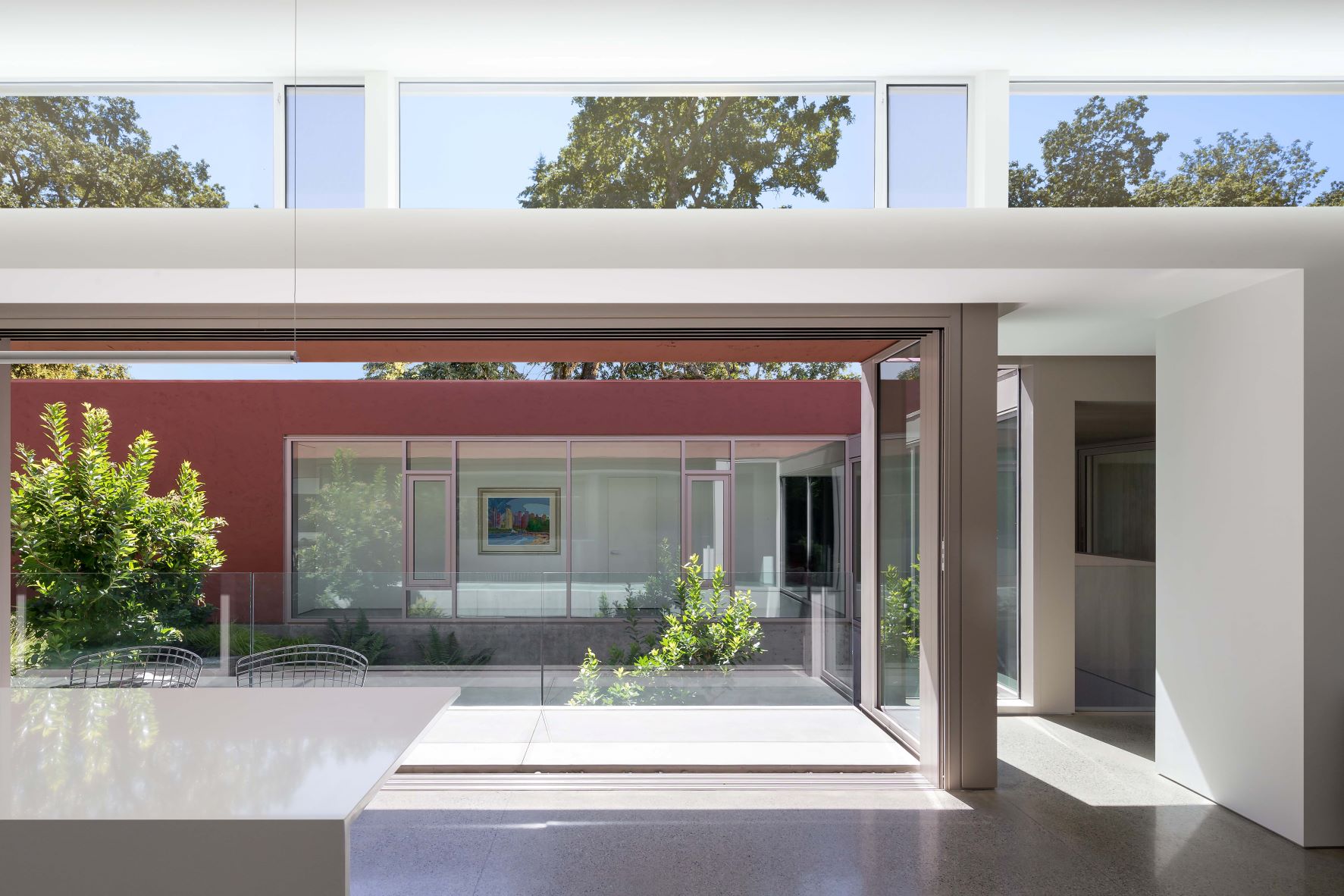 “We work hard to avoid repeating building styles or recognizable aesthetics,” Jones says of his small team of industrious designers. Everyone “rolls up their sleeves, drawing, modelling, rendering, testing, talking, and trying.” They strive for something out of the ordinary, though never solely for the sake of being different. “Like art, architecture has something to say, but mostly it has a job to do. In architecture, utility and beauty need to work together”—and always, he notes, in ways that are responsive to a specific environment.

Entrusted with a naturally beautiful property like the Lampas’, some architects will go high, stacking flashy storeys one on top of the other, and there are other sites in this neighbourhood where the builder did just that. Jones went low, as in low-slung, designing a single-level structure more aligned in scale with its neighbours and better absorbed into its park-like surroundings than a traditional-style multistorey house.

Single-storey stucco-clad homes with shallow pitched roofs, asymmetrical front facades, and large picture windows remain common in this quarter of Uplands. Jones’ new scheme is an obvious departure, though not altogether radical, and gimlet-eyed students will spot the ways it reflects the neighbourhood’s midcentury suburban character.

The roofline, its most arresting feature, begins with a referential 1960s pitch before plunging from the peak in a strict vertical drop. Picture windows in Jones’ rendition read less like generic purpose-built punctuation and more as artful counterweights to the other exterior cladding materials: powder-coated aluminum, cedar, and most prominently, stucco. Even the iron-oxide-coloured exterior references the commonplace Baker brick and cement stucco seen in historic Victoria. 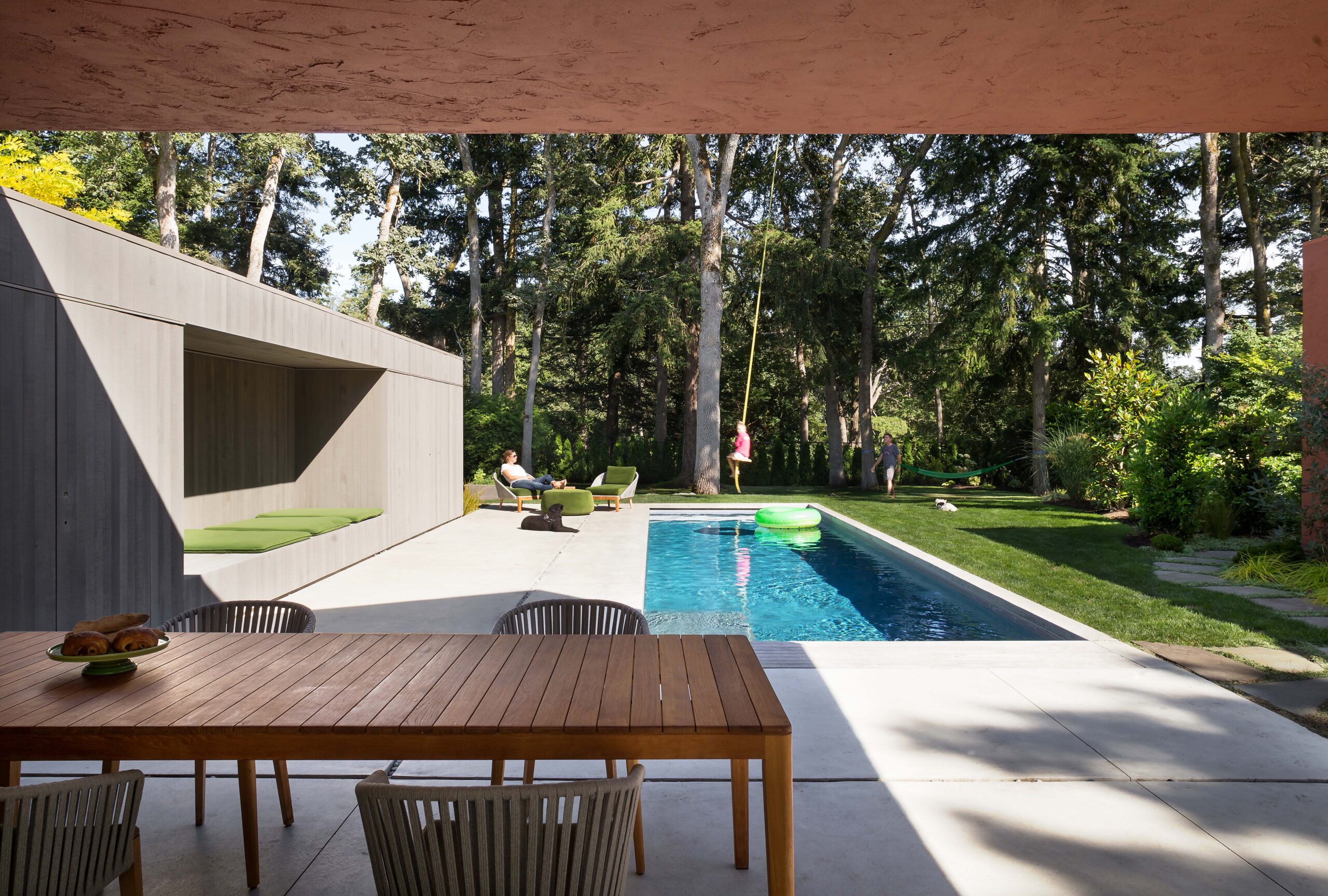 From the street, it is impossible to understand what this home, with its naturalistic landscape and intentionally disguised front entry, is like inside. The interior is a sensible U shape with two separate living zones, wings if you will, linked by a glass-walled passageway. One zone contains public spaces; the other, private ones. Between them sits a generous courtyard. One half is planted in cooling green landscape; the other, coated in poured concrete inset with a swimming pool lined in charcoal-coloured plaster that renders the water a deep, dappled blue.

No matter where you are inside the Lampa house, Jones’ mastery of sightlines is visible. His design controls where you look and what you look at. The aim is always to offer a beautifully framed visual experience that does not interfere with the function of individual spaces. Take the retractable glass walls in the living/dining area that draw the eye either out over the kitchen island and toward the elegant pool and patio or across to the lawn and crazy-laid flagstones: when opened all the way, they ensure the seamless connection between inside and outside that gives this family oasis the look and feel of an inviting SoCal resort. They also play an important role in keeping the indoor air quality outdoor fresh. 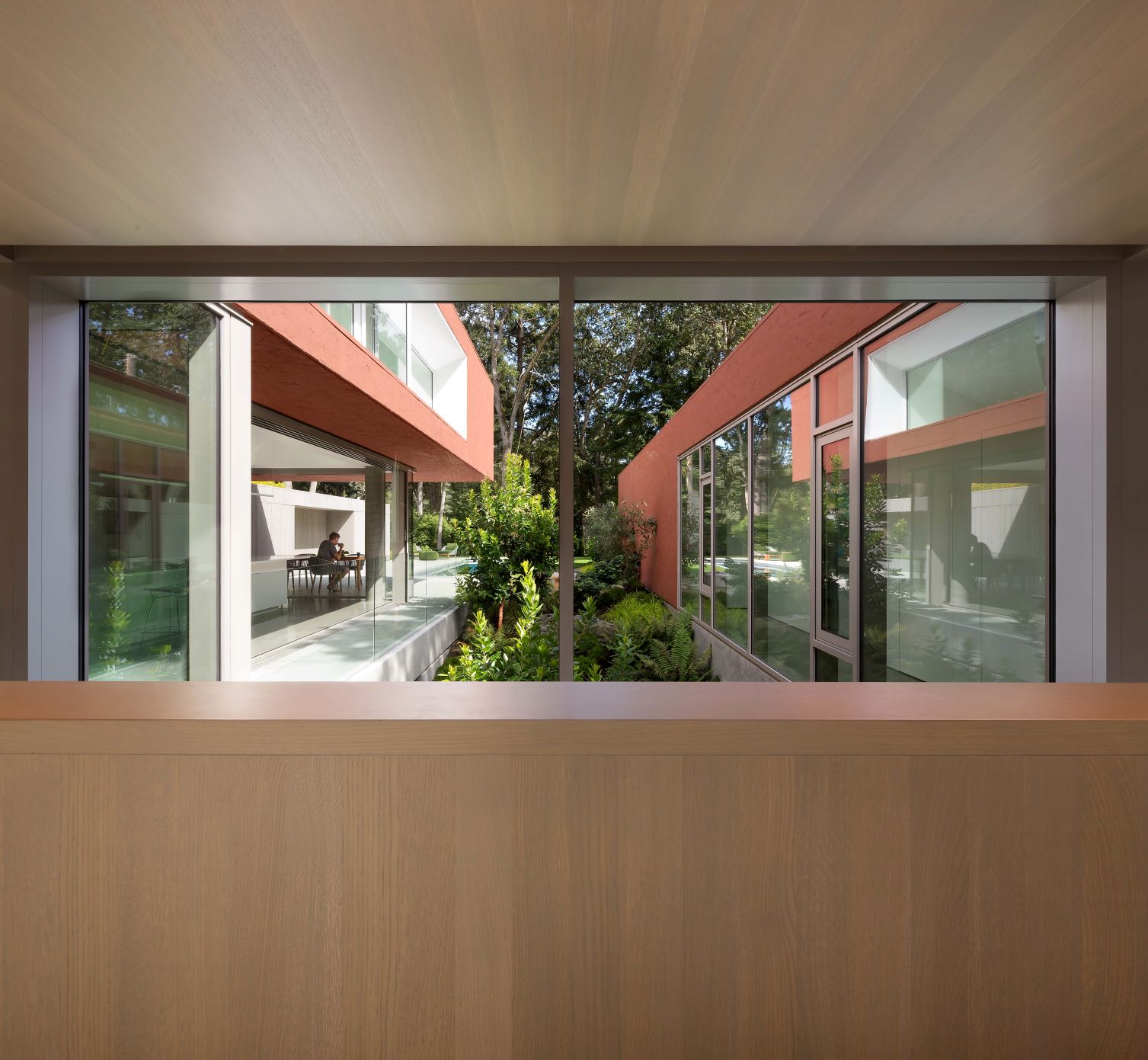 The other players in climate control are the two south-facing clerestory windows that run the entire length of each wing. Barlow didn’t know what to make of them when Jones first shared his vision. “I thought, whoa, the neighbours are going to think we’re crazy because they looked a little crazy to me—but that was before I had any appreciation for what clerestory windows can do.”

South-facing clerestory windows, when designed and positioned properly, admit indirect easy-on-the-eyes light, bathe ceilings and walls, even deep into an interior, in a luminous year-round glow, and provide powerful solar energy benefits. From the outside, the Lampas’ deep-set clerestories look like giant, sculptural light scoops. Jones says they “chase sunlight” from sunup to sundown and ensure “every single space, including the laundry room and the closets, the powder room and the bath, not just the master suite or living room, gets the same-quality daylight.” There is little need to flip an ambient-light switch anywhere inside until late in the day, he explains, no matter what time of year. 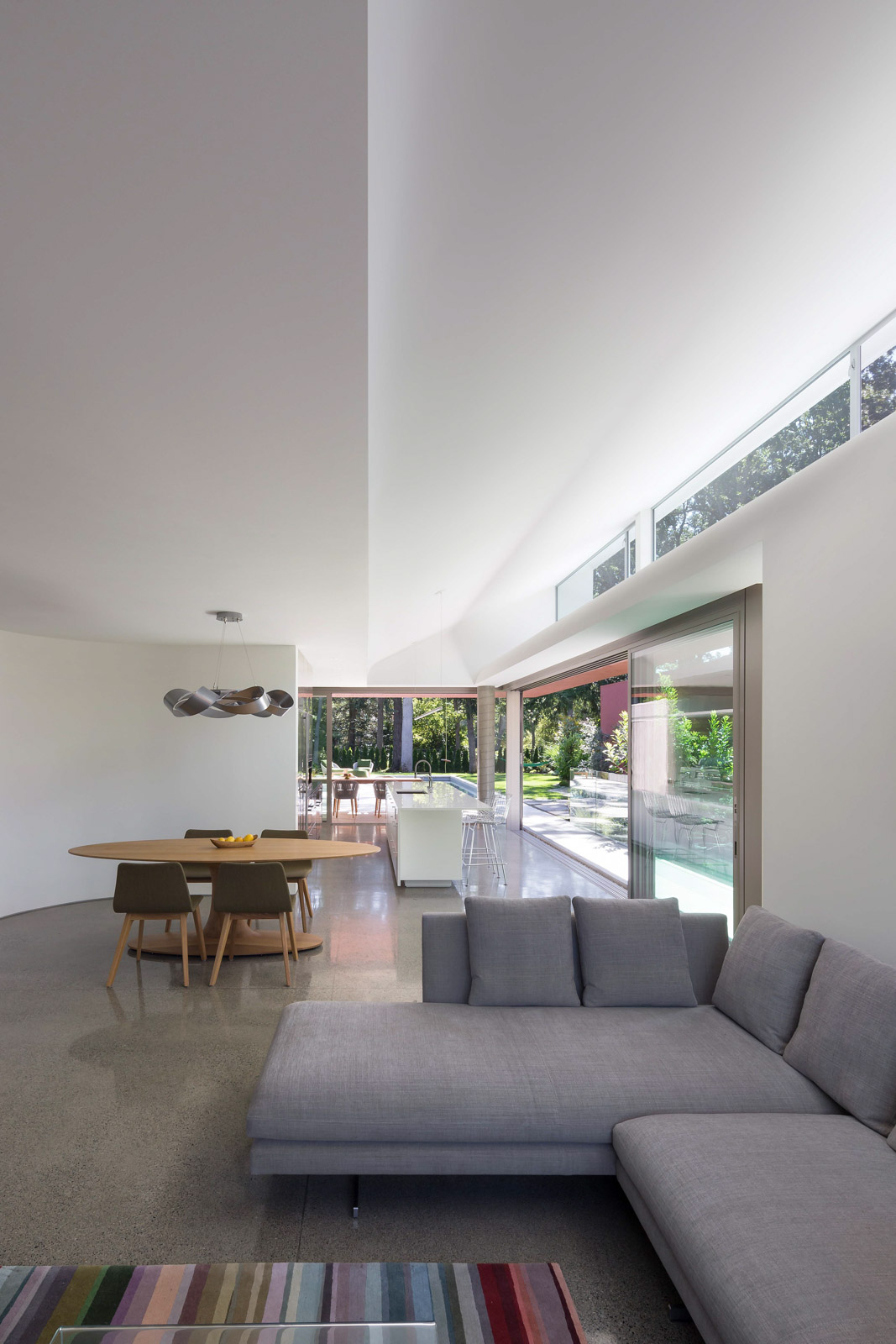 Operable clerestories cut mechanical heating and cooling costs, too. Here they capture warming sunlight in the winter and release the hot air that builds up along the ceiling. Left open in the summer, they expedite the draw of cooler air in through open doors and windows, creating breezy air conditioning.

The family officially moved into their new home in 2019 and couldn’t be happier. Lampa can play golf on the course next door; Barlow can hop on her bike and pedal to the nearby hospital where she assists part time with cardiac surgery; their youngest daughter’s school is a quick walk away.

Life, Barlow says, is good again—in this place, and in this home. 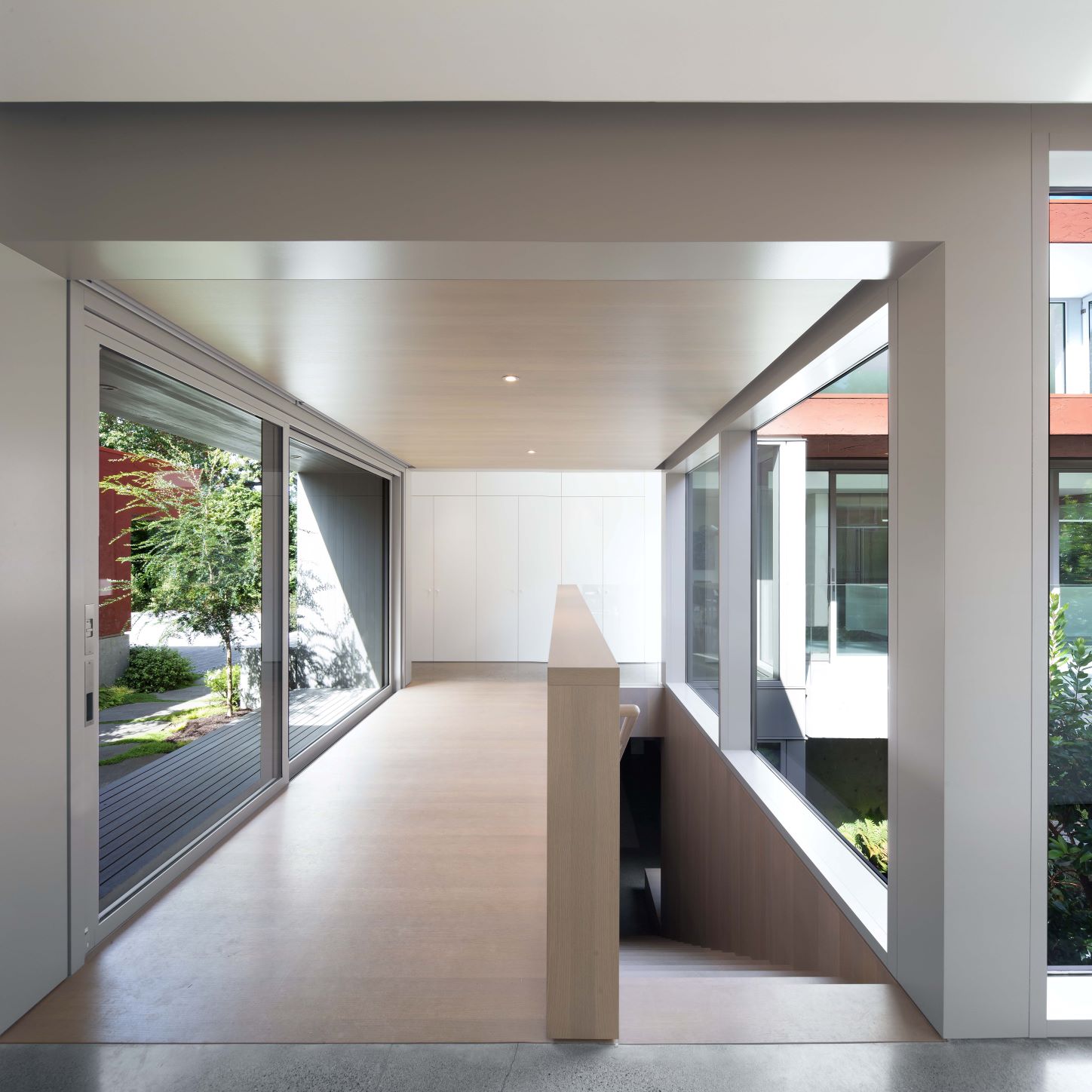