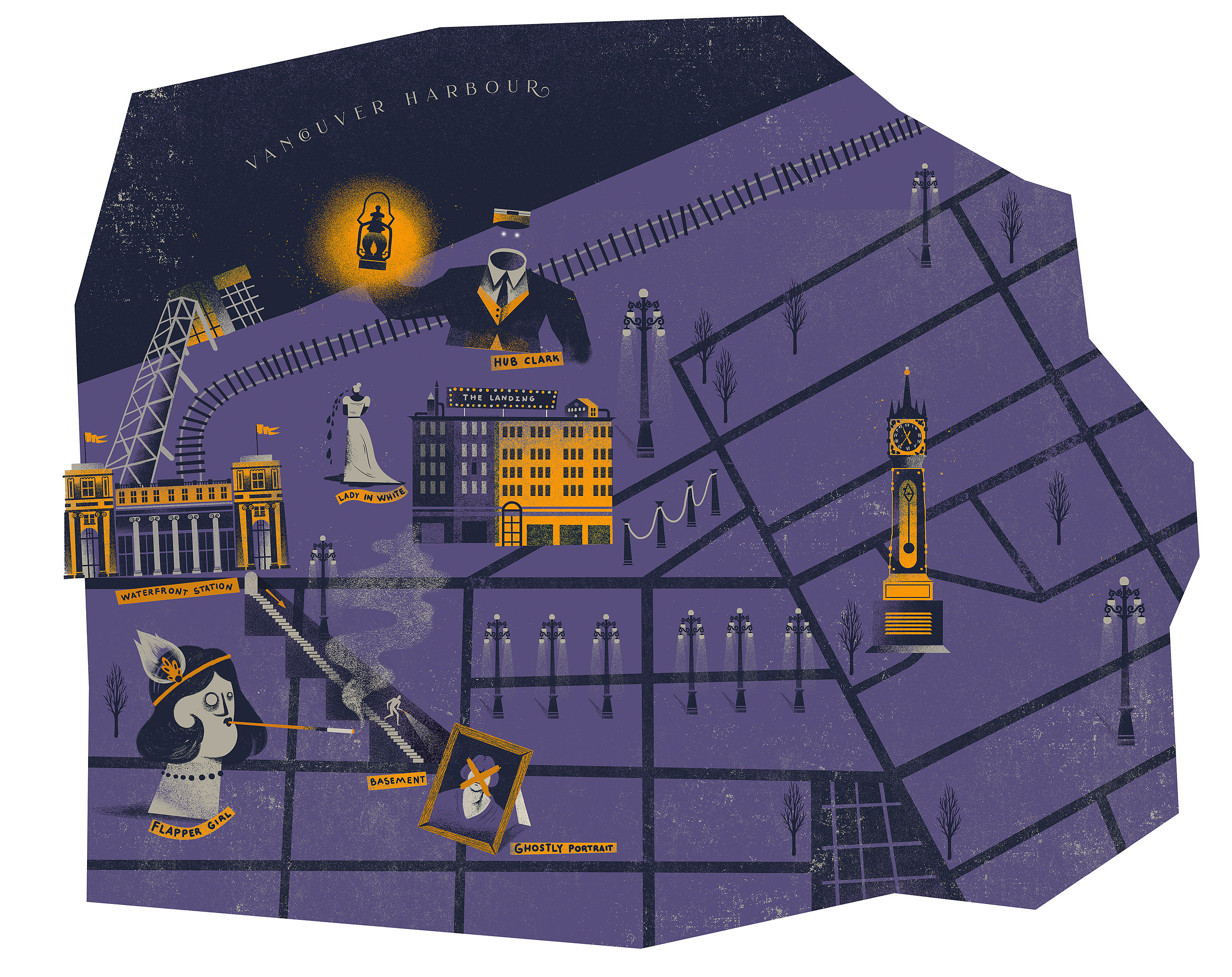 Sometime around midnight, a woman glides from the closed elevator doors into the Landing lobby. She wears a long white dress and appears not to notice the night guard at his desk. Outside, it’s a chilly autumn night and rain pelts the floor-to-ceiling lunette window, mimicking the tears running down the woman’s face. She drifts toward the glass, the lights of Coal Harbour and the North Shore beyond blurring together in an indistinct neon tapestry. She stares straight ahead, not turning to acknowledge the night guard’s call. He tries to approach her, but she disappears, leaving a puddle of tears where she stood.

The Lady in White is infamous among the men working the graveyard guard shift at the Landing, once a warehouse for supplies during the gold rush but now a multi-tenant commercial building. She only shows herself to men and only on cold rainy nights. One security guard reported feeling frozen in place when he tried to reach her and said her weeping escalated into hysteria until she suddenly vanished.

Some say the term graveyard shift originates from cemetery attendants listening at night for the sound of bells from the coffins of those buried alive, others that it comes from the deathly silence or the likelihood of late-night accidents. Regardless, the graveyard shift is still marked with the same strained apprehension. Just ask any security guard or janitor who walks empty halls in the witching hours, especially in Gastown, Vancouver’s oldest developed area, which has survived fire, pandemics, and tragic accidents—even when its residents didn’t.

“There’s fertile haunting ground wherever you have tragedy,” says Lydia Williams, owner of Ghostly Vancouver Tours and an expert on Gastown’s ghosts. “It all adds not only to the lore of an area but to the unrest of spirits.” One particular block, between Waterfront Station and the Old Spaghetti Factory, is home to at least a dozen ghosts who have been spotted by night workers and patrons and whose stories both delight and unnerve.

The Lady in White’s visits are not only legend but have also left a permanent mark on the Landing, warping the floor where her tears fall. Maintenance crews have investigated non-paranormal explanations for the warp but found nothing. The theory is that the Lady in White is looking out to sea mourning a lost sailor, but Williams has other ideas. “Is she crying over Hub Clark? That’s always my theory because it’s a perfect view of the rail yard too,” she suggests.

Hub Clark is perhaps Vancouver’s most legitimized ghost. Both Canada Post and the Royal Canadian Mint have included him in special collections honouring Canada’s most famous hauntings. The story of Hub Clark is simple and tragic: he was an unlucky brakeman in 1928 who slipped on the wet tracks one night and was knocked unconscious then beheaded by an oncoming train. In the years since, people have reported sightings of a flickering lantern floating in the distance and even a headless man carrying the light up and down the tracks.

A woman in a flapper dress has been spotted swaying to ghostly jazz music in the hall of Waterfront Station before disappearing into the ether.

Williams claims that “a haunting is built on attachments.” According to her, much ghostly activity is just a replay of residual moments trapped in the stones of a place. For instance, a women in a flapper dress has been spotted swaying to ghostly jazz music in the hall of Waterfront Station before disappearing into the ether.

But the station’s darkest story tells of the portrait of a ghost that lives in the basement, two storeys beneath the feet of unwitting commuters. After meeting the spirit of an old woman down there, a security guard was wracked with nightmares. Her visage haunted him in mirrors and windows until, though by no means an artist, he was compelled to paint her portrait in the dead of night. He brought the painting to work and hung it in the basement, after which his nightmares ceased. A custodian moved her to a different building because of electrical anomalies such as cellphone interference, power outages, and noises, but he was forced to return it when he too became haunted by nightmares. Now, new security guards are brought down to meet the lady as part of their onboarding.

Few civilians have ever seen the ghostly portrait, but Williams has a photo of it on her phone. The lady’s eyes and mouth are Xed over with yellow spray paint, creating violent gash-like absences where her expression and personality should be. It’s almost as if someone were trying to close off her essence to prevent her escape.

A good ghost story works its way inside the listener, into our nerves and imaginations or, for the workers of Waterfront Station, into our very nightmares. Things appear different in the darkness; spectres of our fears, our tragedies take shape and can leave behind remnants that last into daylight. Like ghostly tears warping a floor, our minds bend and twist as we try to make sense of the things that haunt us.