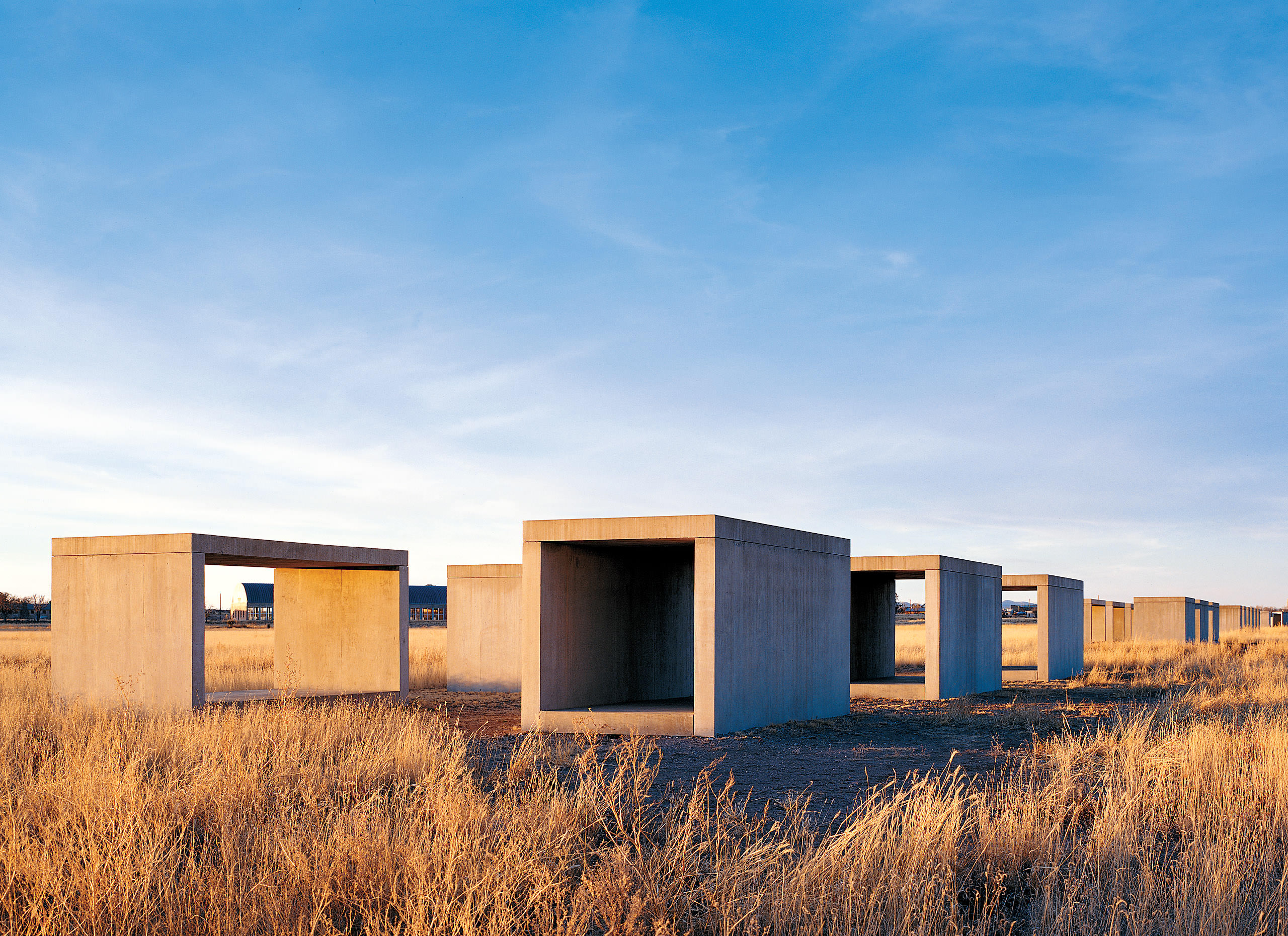 It’s 9 a.m. in Marfa, Texas, and the sun is already intense. It will push incrementally up the dial until around 4 p.m., slowly cooling off to a temperature approaching tolerable when it sets. I’m standing outside on this scrubby land less than 100 kilometres east of the U.S.-Mexico border, the heat penetrating my bones, the swirling dust doing its best to join it. There is no relief from this landscape. No waiting for it to become more hospitable. It is and I am; I only exist in relation to the space I am taking up.

I didn’t know what to expect of this tiny (population less than 2,000) town in the Chihuahuan Desert. A visit that would challenge me? For sure. But as I stand in this searing, bright morning light, I sense something more profound at play.

Marfa is a quirk of circumstance—a destination by design. You don’t travel here by accident. It’s a place where contemporary cowboys and Mexican immigrants live and work side-by-side with artists and hippies who come to stay for a while but may never leave. Where road-tripping retirees sleep over, and well-heeled acolytes pop in for a few days. And like other such beguiling and bewildering places around the world, Marfa is a contradiction, disorienting and all-encompassing in equal measure.

The reason Marfa is on the map is down to one man. It’s true that Hollywood has used it as backdrop—most famously, George Stevens’ Giant, starring Rock Hudson, Elizabeth Taylor, and James Dean, was shot here, and more recently, Paul Thomas Anderson’s There Will Be Blood—but they are bit players. The main character in the Marfa opus is Donald Judd, who picked this place to create, work, live, and make art precisely because it was so far away, physically and philosophically, from his home in New York. 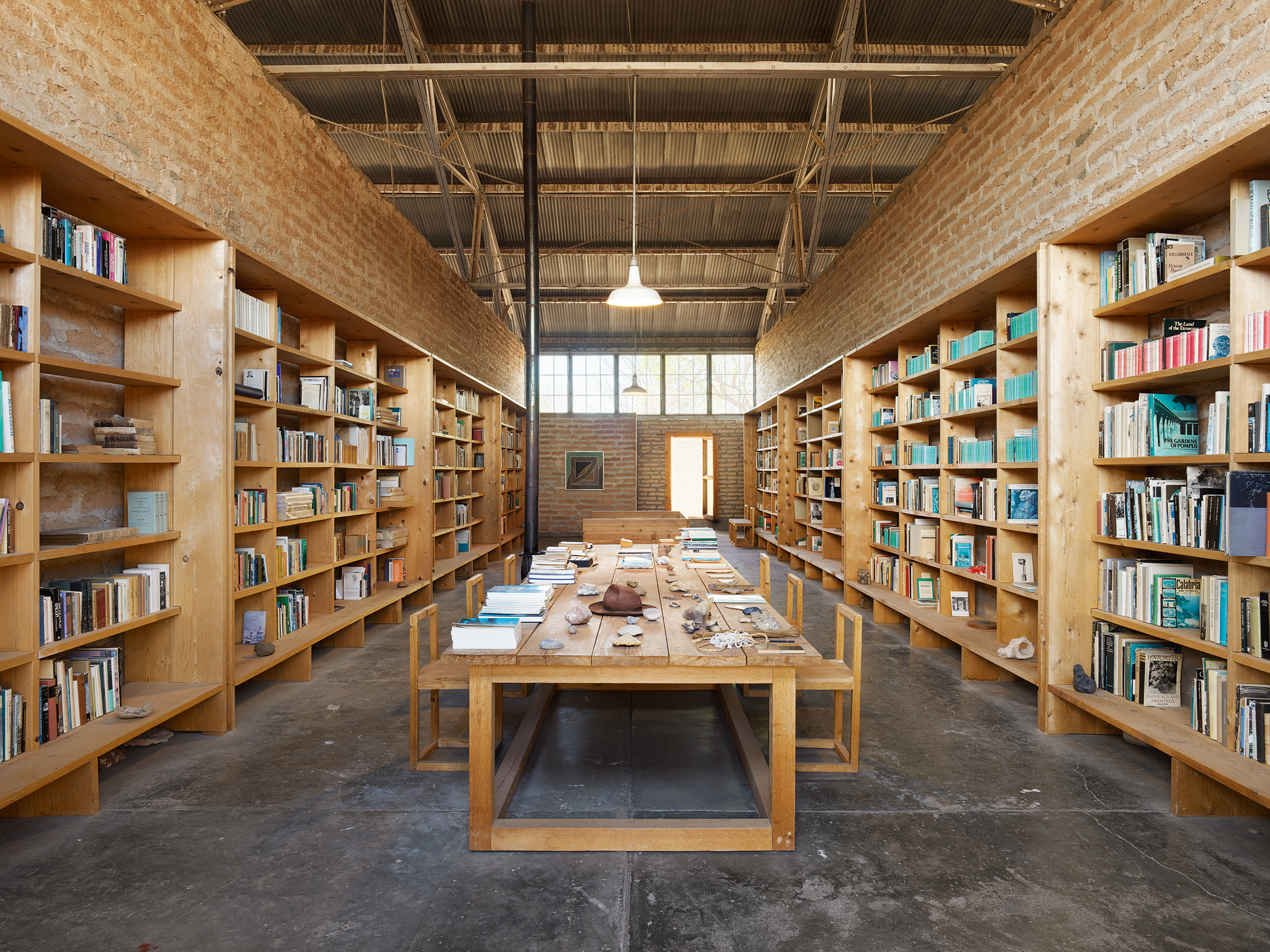 I came to Marfa for Judd, but I had travelled to Texas for a different artist altogether. It has been a quiet obsession of mine for more than three decades to visit the Rothko Chapel in Houston. If my encounter with Judd was to prove life-changing, so was the moment in my early twenties that I stood in front of a Mark Rothko painting for the first time. Again, here was art that refused to proffer a narrative. Rather it invoked—demanded, even—a visceral response. I didn’t understand why this painting stopped me in my tracks. I didn’t understand it at all, to be honest. But I could not look away. It pulsated in time (or so it felt) with my heartbeat. It swallowed me whole.

In Houston, I take a moment to absorb the power of Barnett Newman’s imposing Broken Obelisk dedicated to the memory of Martin Luther King, Jr. Opposite the Rothko Chapel’s door, at the end of a reflecting pool, it is a fitting reminder of the humanitarian mandate underlying the creation of this place. The shape of an octagon inscribed in a Greek cross, the chapel is a spiritual space with art, not iconography, adorning its walls, a meditative interfaith place for reflection and dialogue across all divides, the pursuit of human rights at its core. Commissioned in 1964 to paint the murals by Houston art collectors and philanthropists John and Dominique de Menil, Rothko oversaw all aspects of the chapel’s design. It opened its doors in February 1971, a year almost to the day after Mark Rothko took his own life. 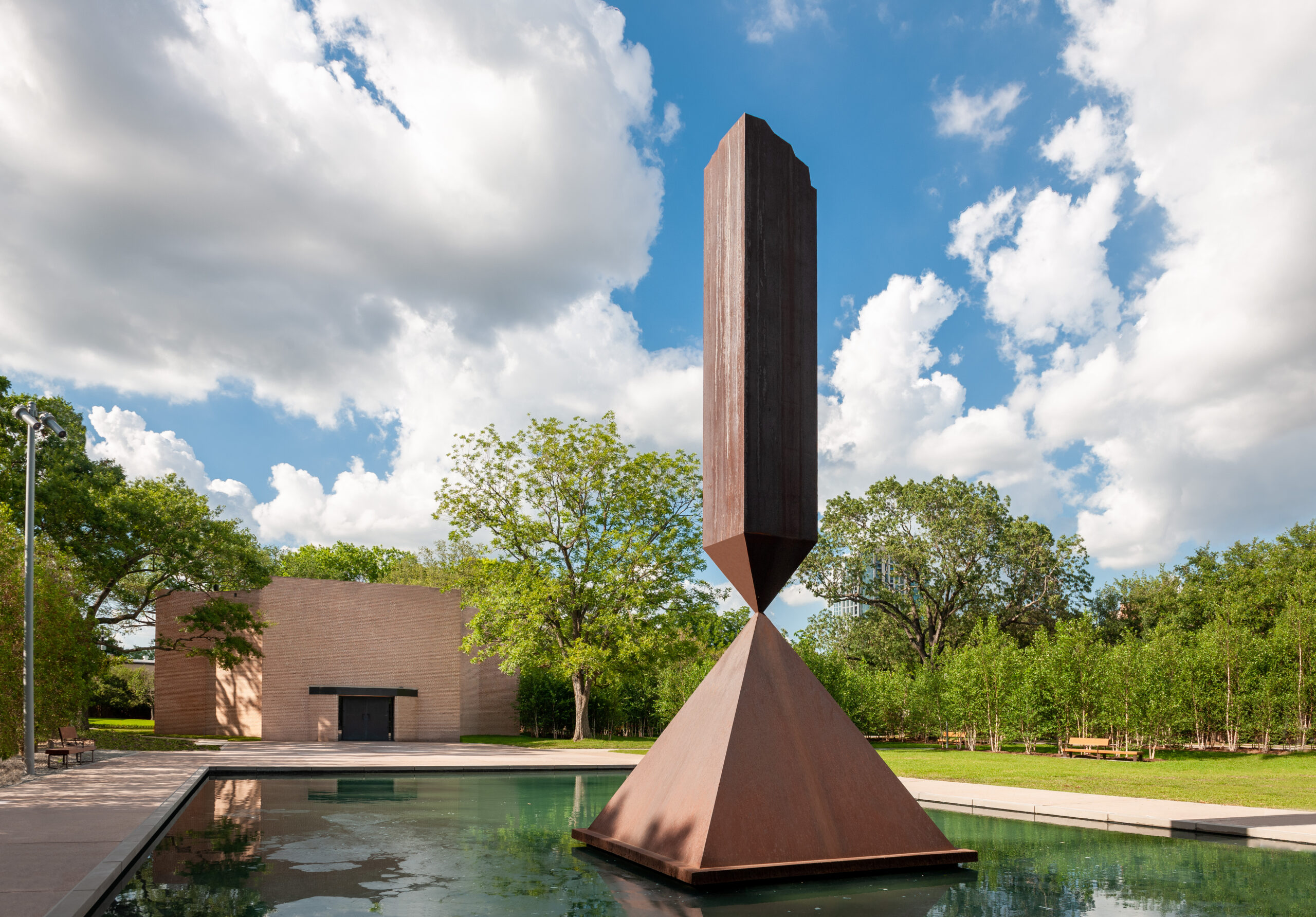 The Broken Obelisk in the Rothko Chapel Plaza. Designed by Barnett Newman and dedicated to the memory of Martin Luther King, Jr. Photo by Paul Hester, courtesy of the Rothko Chapel, Houston, Texas.

In the vestibule, my eyes take a moment to adjust to the darkness, then I enter the main room. It is a simple space: the murals, wooden benches set out in a square, and three meditation cushions. The 14 paintings—three triptychs, five single canvases—are huge, and at first glance, black, or close to it. They are both too much and too little to immediately take in.

I pick a bench and sit. And sit. And sit. After several minutes, I move to another. I sit and stare and breathe. The dark hues, from black through slate greys and deep purples, begin to reveal themselves, as do the textures of the canvases. Perhaps the years I have spent in the Pacific Northwest have taken root, but in the edges of the purples I begin to see forests swirling with clouds, the mist rising and falling with my breathing. The darker canvases absorb my thoughts, force me to acknowledge the emotion held within them and allow them to dissolve them into air.

Here, I simply am. 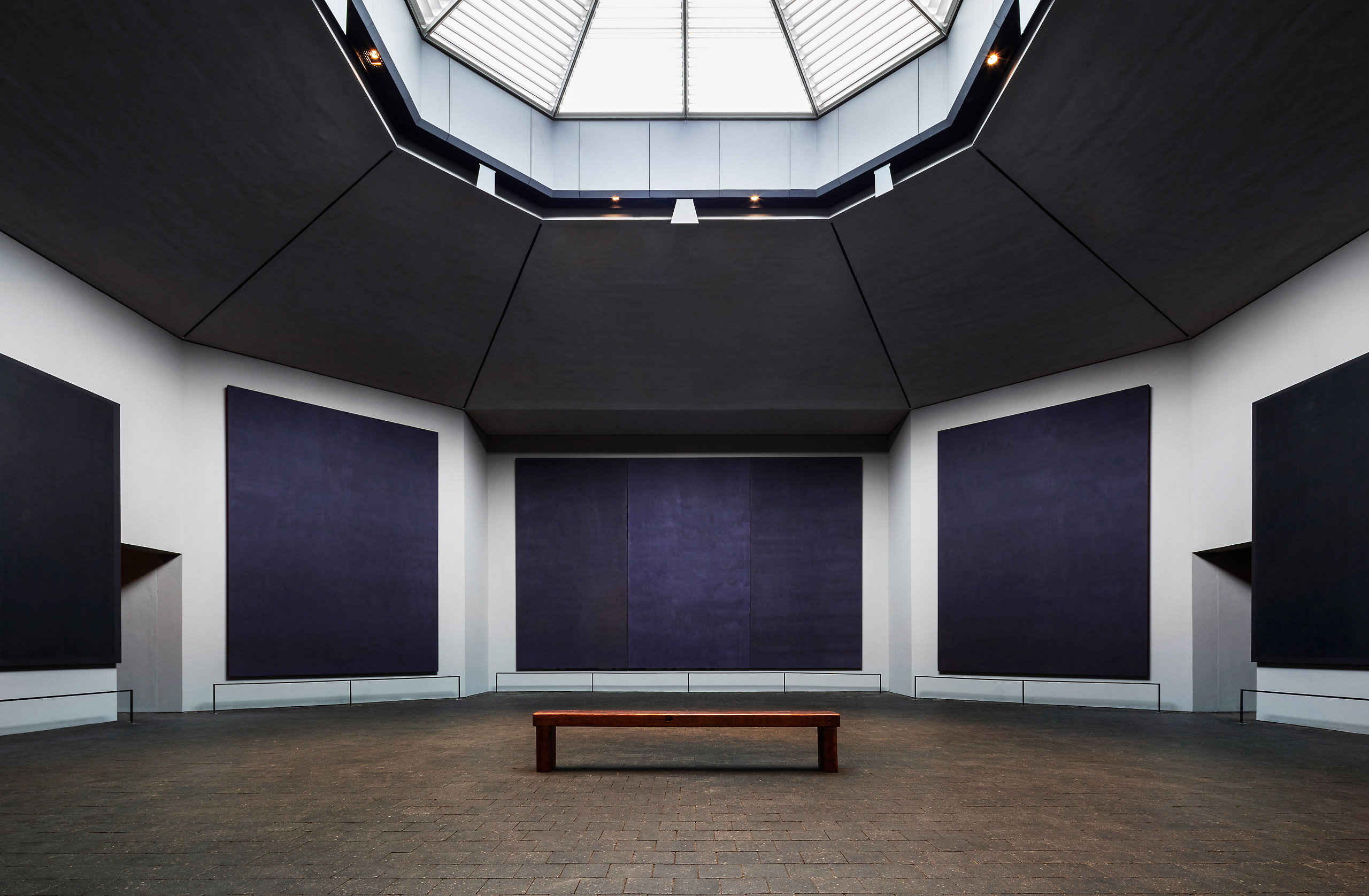 The chapel is a meditative space for reflection and dialogue. Photo by Elizabeth Felicella, courtesy of the Rothko Chapel, Houston, Texas. .

It does not surprise me when I am told there are people who live close to the chapel in order to meditate here every day. Nor that travellers with brief layovers in Houston will extend them and jump in a taxi to spend time in this space. In my two days in the city, I visit on both, each minute spent with these Rothkos enriching me in ways I struggle to articulate.

Moving from Rothko to Judd requires a flight to El Paso and a three-hour drive to the outskirts of Marfa and the Chinati Foundation, a reclaimed military site dotted with buildings, some dating back to U.S. cavalry days, others—massive hangars—remnants of the Second World War. Donald Judd became enamoured with Marfa in the 1970s as his frustration with not just how his art was being presented but also the damage caused by its handling while on loan to museums and galleries intensified. He began buying property in town and, with the initial help of the Dia Art Foundation, began the massive project that is now Chinati. When he died in 1994, he also owned three ranches in the nearby foothills; he is buried at his favourite.

The Judd Foundation offers tours of The Block, his downtown home, with its several large buildings contained in an entire walled-in city block, to give a sense of the man. An art critic turned artist, Judd was an obsessive reader, spending up to five hours a day on one of his many self-designed daybeds that feature in almost every room. His extensive library contains some 13,000 books on everything from astronomy to philosophy, English literature to Scotch whisky. A long table still holds the piles of books he was reading when he left for New York in 1994, oblivious that he would not return to finish them.

Split between the two huge former artillery sheds that dominate Chinati is Judd’s work 100 untitled works in mill aluminum, 1982–1986. It is a sequence of 100 large rectangular boxes with identical exterior dimensions but unique interiors—hollow, divided horizontally, vertically, recessed tops. Judd created the work specifically to sit inside these hangars, which he adapted by introducing walls of continuous windows along each side and creating more height by vaulting the roofs.

“Three dimensions are real space,” he wrote in his 1965 essay “Specific Objects” (he did not consider his work to be sculpture). “A work can be as powerful as it can be thought to be. Actual space is intrinsically more powerful and specific than paint on a flat surface.” 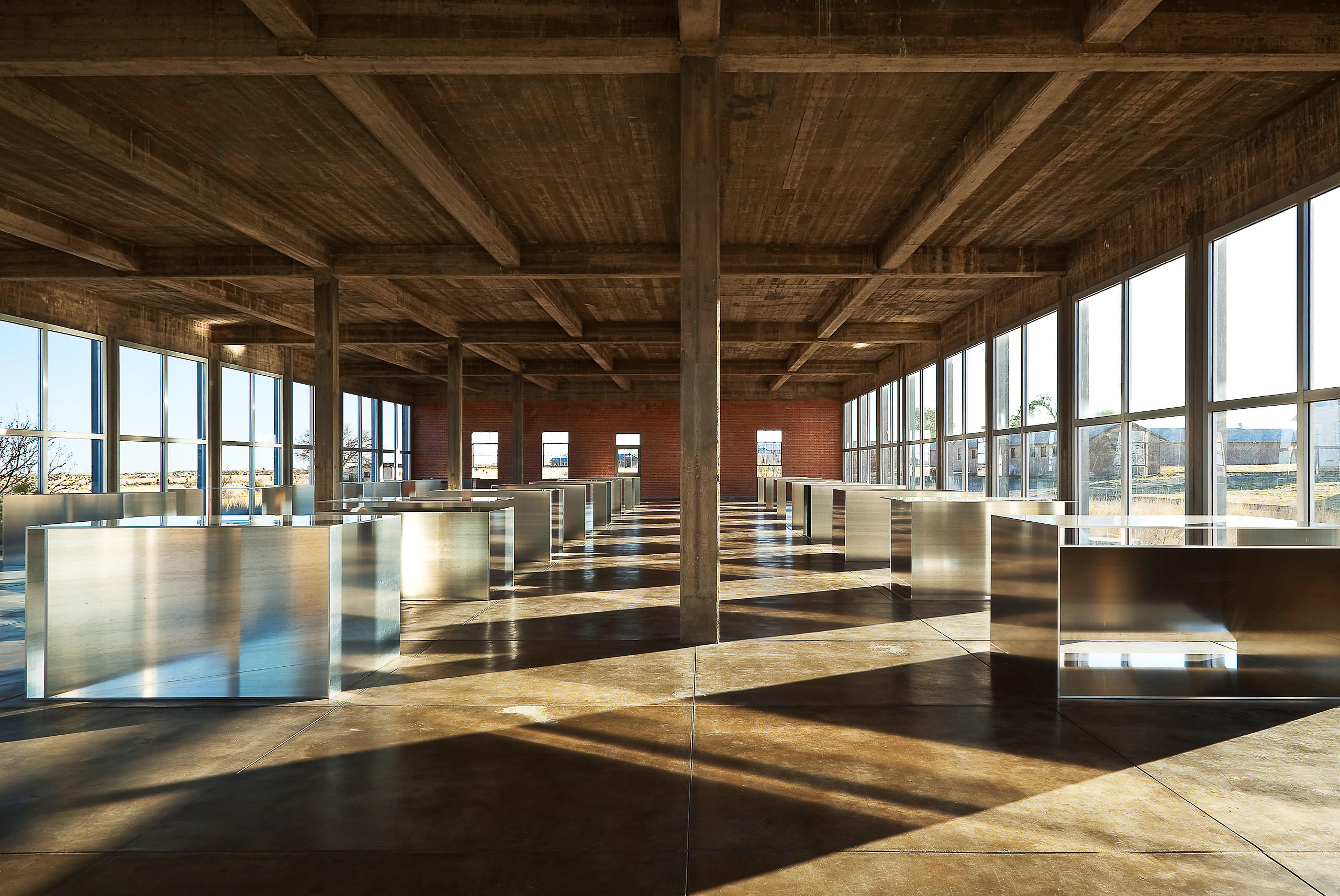 Desert light is special. As it pours through the shed windows, it hits the aluminum objects, adding layers of colour, shimmer, shadows. The weather, the time of day, and the interiors of the boxes mean the work is ever-changing. Then there is where I am in relation to each object, the space I move through, the direction I look. It’s precise, regimental, ordered, but somehow, to me, it translates into something completely open, anarchic, even. No moment is precisely the same. This work in this space gives you what you are looking for only at the moment you allow yourself to see.

Judd’s 15 untitled works in concrete, 1980–1984, are a series of large container-like boxes that line the perimeter of the property. They are the reason I am back at Chinati braving the morning sun. Walking around and between the objects takes time. My relationship to them is driven by light, heat, dust, and the striking (and welcome) deep shadows they cast. It is a sensory onslaught, and I can only surrender. 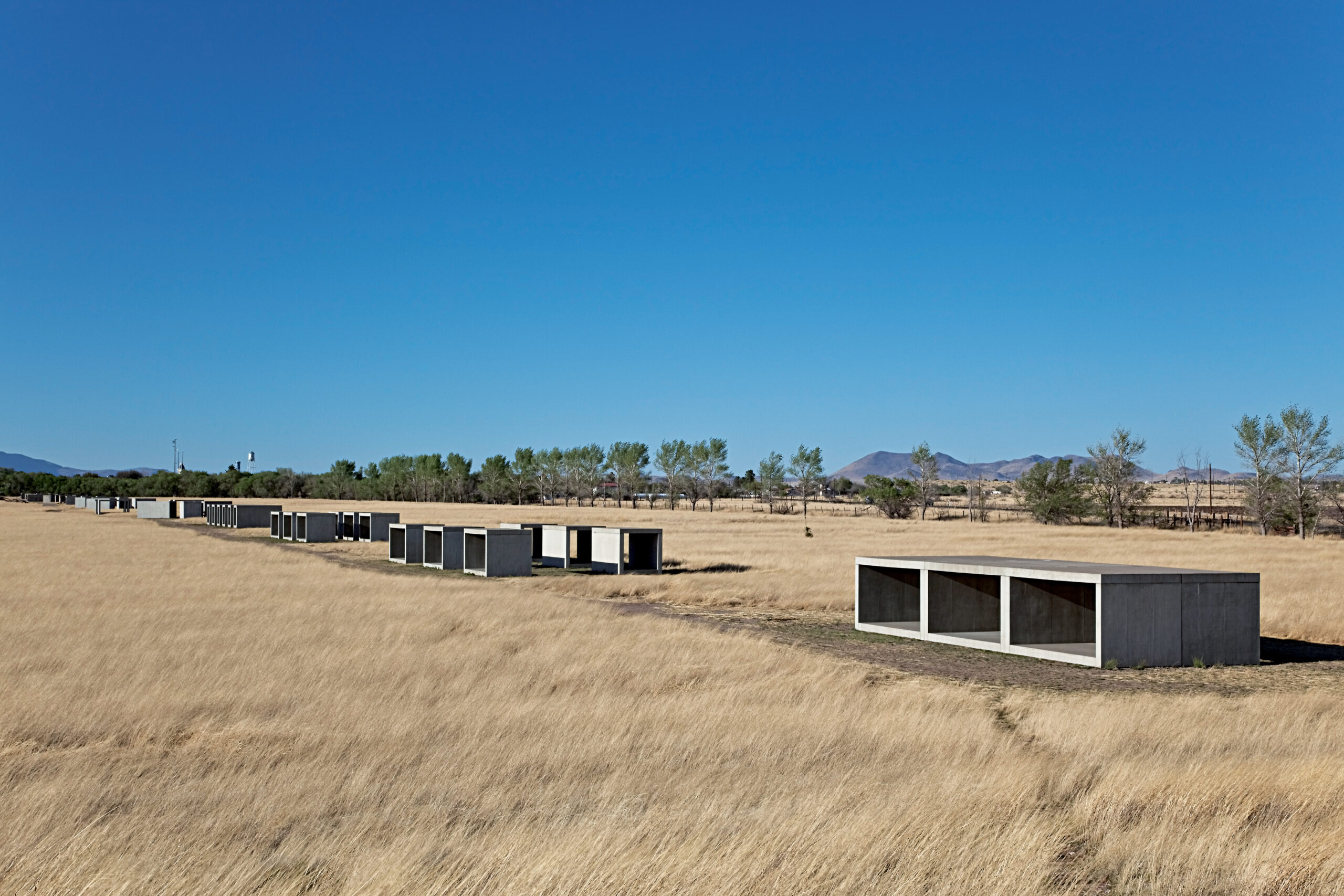 Not for the first time on this trip, I am brought completely inward, reduced to my elements by the convergence of art and time and place. Light and dark, presence and absence. The power of these artists—Rothko and Judd—lies in their refusal to tell you what to think. Their work allows no easy escape, no avoiding yourself. What you see, what you feel, says nothing beyond who you are. A hard road to a sacred place.

Later, I find myself driving up a dirt road, following scant directions to somewhere I hope I reach before dark. I’ve been invited to Maintenant, an informal space created at the home of a couple of Marfa immigrants (from Chicago and Paris) to support local artists. There is free beer and wine, a poetry reading, and a gallery inside a converted garage. Farther away from the house is a large barn. As the sun drops past the skyline, switching the stars on as it goes, I step inside. I’m confronted by a wildly exuberant installation titled Watershed Volume II: Time Travel Device by noted jazz musician and artist Rob Mazurek (another transplant from Chicago). As strobing, swirling colours are projected onto 20-foot-high gauzy clouds, Mazurek picks up his trumpet and plays.