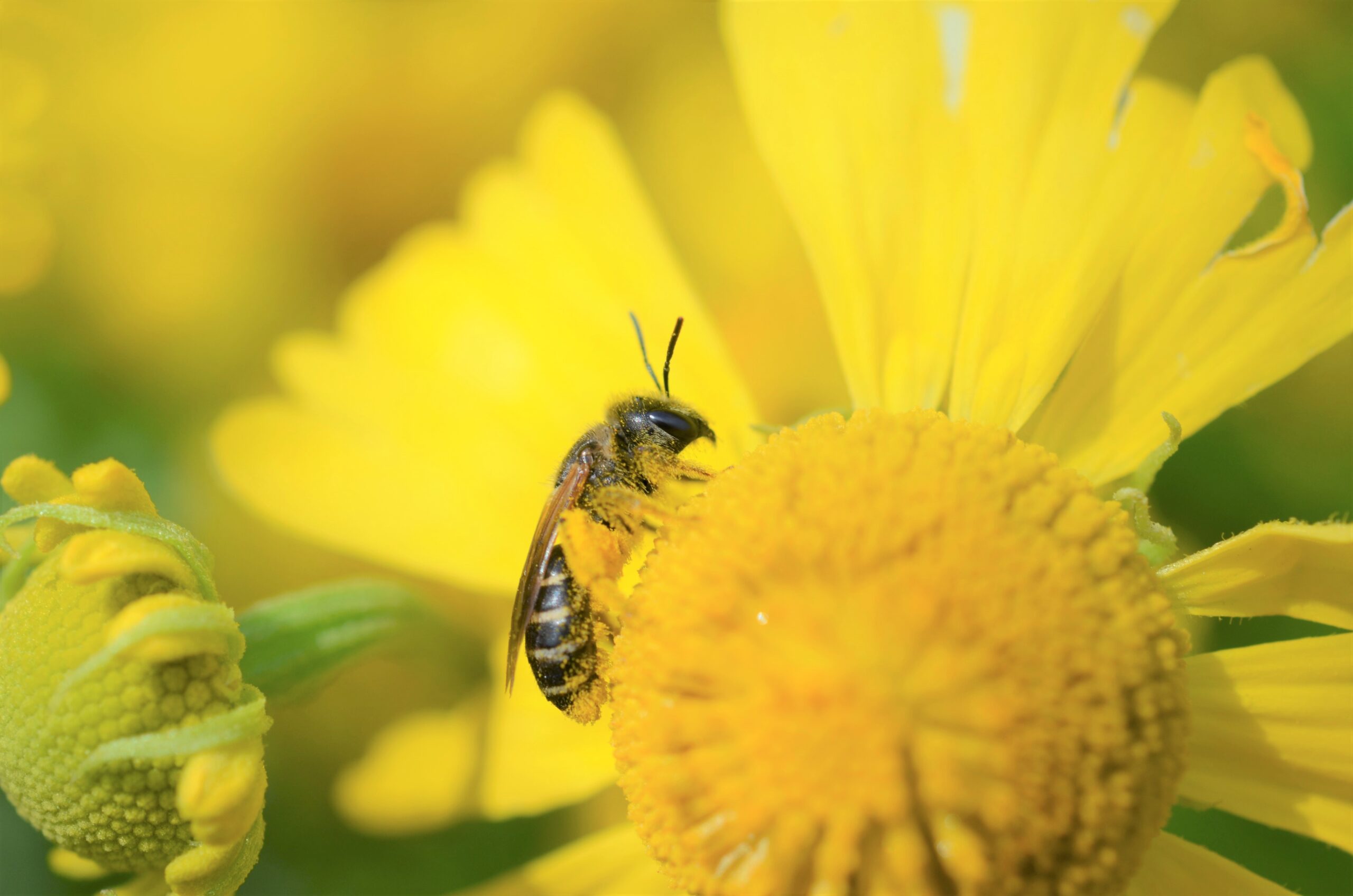 A sweatbee, one of the 450 species of native bees found in British Columbia. Photo by Tiffani Harrison.

Bees are transcendent. The fuzzy, pollen-spreading, seemingly aerodynamically challenged creatures have been celebrated since the time of Sappho in ancient Greece, when the poet wrote of bees and honey associated with Aphrodite. I’ve walked inside the beehive-shaped tholos tomb of Agamemnon in Mycenae and craned my neck to take in the sacred symmetry of its organic shape. I’ve admired bee-print wallpaper in the Hôtel Belles Rives on the Côte d’Azur, formerly a villa where F. Scott Fitzgerald wrote Tender Is the Night. I’ve tasted the almost umami flavour of dark forest honey in Moravia, manna-like Manuka honey in New Zealand, and mead in Norway. Bees appear in Virgil’s Georgics as a symbol of industry and harmony, as well as in Tolstoy’s Anna Karenina. They’ve existed since the Cretaceous era alongside the Tyrannosaurus rex, some 100 million years ago. But today, bees are in peril.

Most people think of honey bees first. But brought to North America from Europe in the 1600s, honey bees are not native to Canada and don’t survive here in the wild. “Honey bees are just one species of bee, and they’re the weirdos of the bee world,” says Dr. Lora Morandin, research and conservation director for the nonprofit Pollinator Partnership Canada (P2C). They live in colonies now largely managed by humans, while there are more than 20,000 different species of bees in the world, 4,000 in North America, 800 or so in Canada, and about 450 in B.C. alone. “In any one region that you’re in, there’s going to be more than 100 different types of native bees,” Morandin says. But because the vast majority of the research and funding into pollinators goes directly to honey bees, the other species—especially native bees—are often overlooked.

Morandin fell in love with bees while working on a master’s project at the University of Guelph, observing native bumble bees pollinating greenhouse tomatoes. “I think it was how integral they are to our lives but how understudied they were and how little we knew about them.” She went on to get a PhD in ecosystem biology at Simon Fraser University, studying agriculture and pollinators, and then postdoctoral research at UC Berkeley. She now supports bees and biodiversity through P2C’s research, outreach, and conservation of pollinators in urban and agricultural areas of Western Canada.

Ninety per cent of flowering plants need pollinators to reproduce—whether that’s a bee (honey or native), butterfly, firefly, beetle, moth, bat, or bird, she explains. A carrot seed, for example, is planted in soil and harvested as a root without bees directly involved, but the seed that grew into that carrot came from a flower that was pollinated. Not only is this important for our food—one out of three bites we eat is thanks to bees—but also every ecosystem. Wildlife needs to eat too.

As a keystone species, bees are also bellwethers or bio-indicators because they are so intertwined within the ecosystem. And they’re vulnerable due to a tangled set of threats: insecticides, pesticides, parasites, disease, loss of habitat, monocultures, invasive species, and climate change. There’s no simple equation. “These factors interact,” Morandin says. “If a bee doesn’t have good nutrition because there’s not a lot of forage and nectar plants for it, then it’s going to be more susceptible to diseases.”

Encouraging diversity (plants that bloom at different times of the year) and rewilding (restoring the natural “wild” ecosystem) is crucial. In B.C., invasive plants—Scotch broom, English ivy, Himalayan blackberry—stifle native plants such as asters, goldenrod, and sea blush. Morandin lives in Victoria on an urban farm (a tongue-in-cheek description she says, although she raises chickens and quail, cultivates produce, and of course supports bees on her small plot of land), where she grows plants like indigenous woolly sunflower to attract green metallic sweat bees. “You’ll see five, six, seven different types of bees when it’s in bloom, just in your front yard in an urban area.” 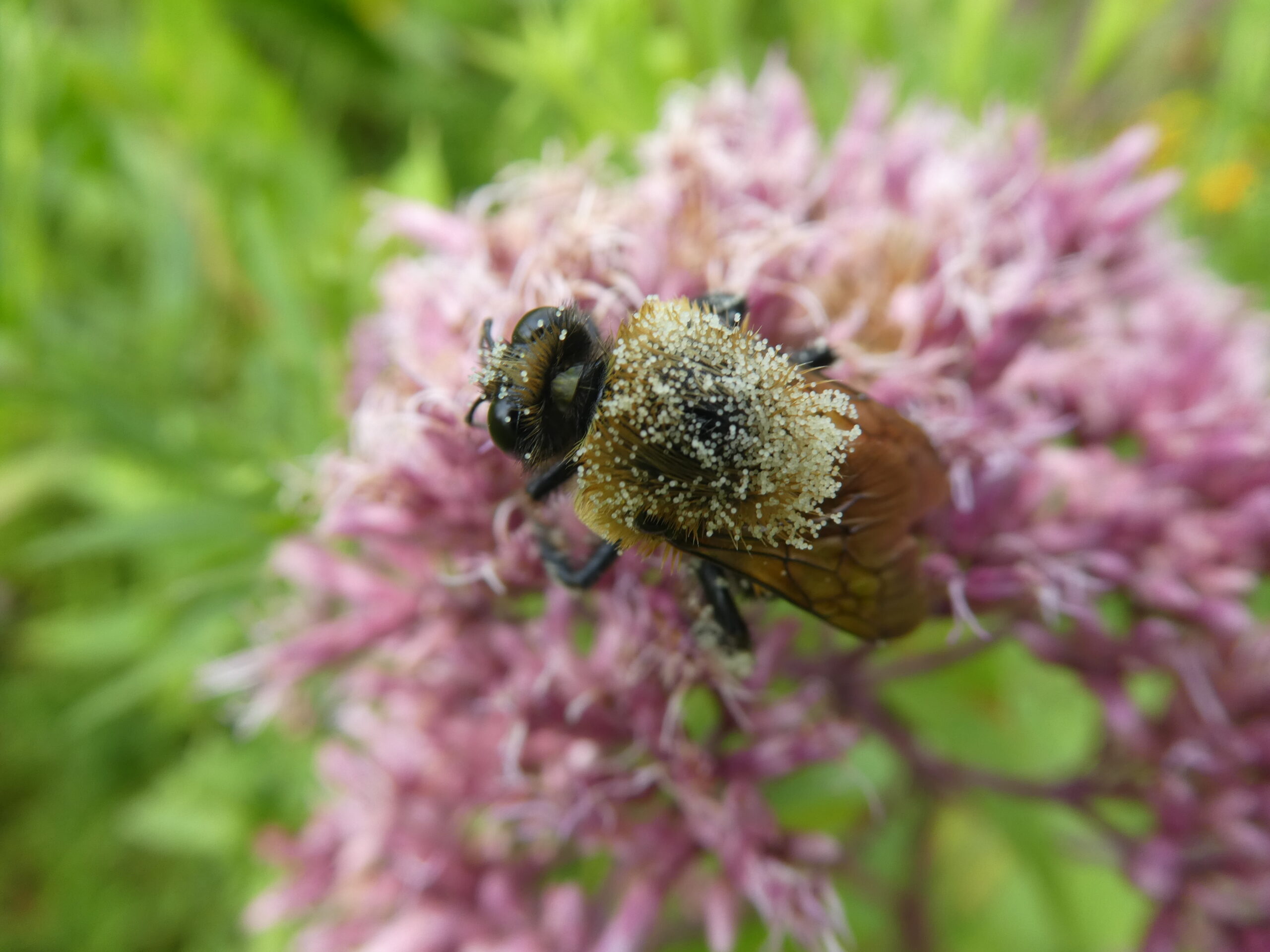 Rewilding is one of the most important things anyone can do—whether in a container on a balcony or in a backyard. Simply asking for native plants at a local garden centre makes a difference by raising demand. Satinflower Nurseries co-owner Kristen Miskelly and Morandin established the MeadowMakers program to rewild spaces such as public boulevards in Victoria. Morandin also started the Pollinator Partnership program to certify pollinator stewards (now nationwide and in the U.S.) to endorse habitat and outreach actions by individuals and organizations (the City of Surrey is working to become certified).

Other initiatives include surveys to monitor population density of pollinators, providing school garden and curriculum kits, and the annual Pollinator Week (June 20–26), which raises awareness with events across the continent (from pollinator-inspired dinners at restaurants to a guided field trip in Saanich at Swan Lake Christmas Hill Nature Sanctuary or with Montana State University researchers). At Wayward Distillery in the Comox Valley, which makes 3,000 litres of mead every week for its honey-based spirits (including Unruly Gin, the first honey spirit in Canada), there’ll be educational sessions and cocktails (a kit with local honey products will be available through the Bar Cart). Last year, founder Dave Brimacombe pledged to donate one per cent of all spirit sales to Pollinator Partnership Canada and hopes to reach $20,000 by this summer.

Brimacombe’s distillery gets all its honey from Golden Clover Apiary in the Peace Region in northeastern B.C. Its bees pollinate crops (largely cranberries in the Fraser Valley), then rest on clover fields in the north and leave that ambrosial byproduct of honey. The apiary’s hives have grown in number from 300 to 1,500 since partnering with Wayward, and becoming part of this food network has shown Brimacombe that “honey isn’t just an ingredient.” Bees make food, he says, and if you eat food, you should be invested in what they’re doing. 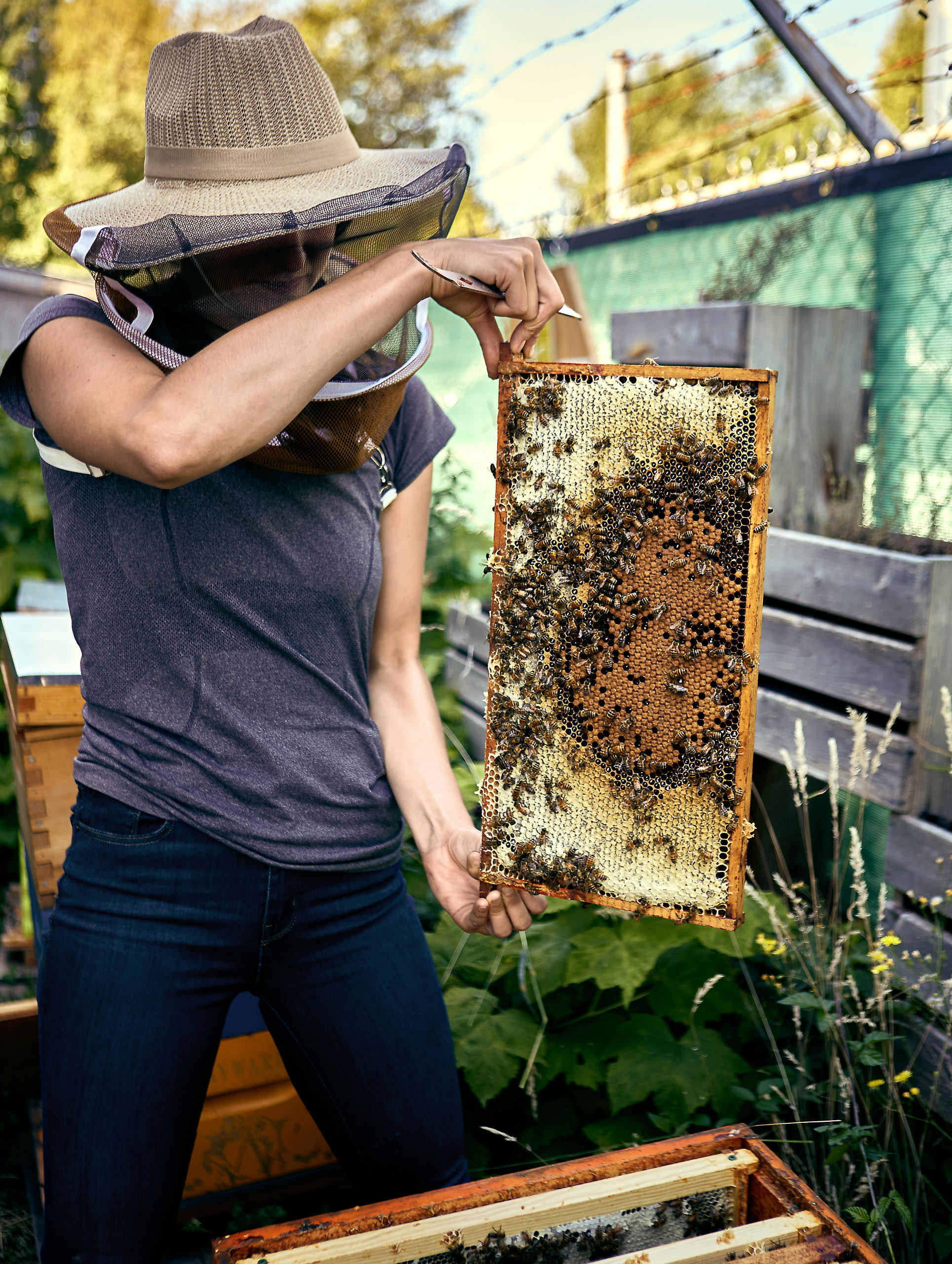 There are more than 20,000 bee species, but honey bees get the most attention, and consequently, conservation support. Image courtesy of Wayward Distillery.

“I didn’t understand how fragile our ecosystem is,” Brimacombe says. When he founded Wayward in 2014, his goal was to use sustainable honey and support B.C. agriculture. “By working with honey, I was able to create a business that created more food than it removed, because every honey bee touches thousands of flowers. One bee will produce one-12th of a teaspoon in its entire life, so a litre of honey could produce 500,000 pollinated flowers. It’s amazing. Every litre of honey that we use is a byproduct of our bees pollinating B.C. crops, feeding the people who live here with food growing here.”

Honey bees are indeed amazing, but compared to other pollinators, they are least in need of saving, says Dr. Alison McAfee, a postdoctoral fellow researching honey bees at the University of British Columbia. “One way to think of honey bees versus native bees is to think about other livestock, like chickens,” McAfee says. “Honey bees are to native bees as poultry are to native fowl, but if the poultry were allowed to roam free and interact with the environment, consuming food and potentially spreading disease, then come back to their hen house at night.”

Yet farmers need honey bees and commercial beekeepers to produce reliable crop yields, and “these days, farmers need all the assurance they can get,” McAfee says. “Commercial beekeeping certainly doesn’t benefit native pollinators, but there’s no way around that with our current food supply chain.” Just in Canada, the economic harvest value of honey bee pollination equals $5.5 billion per year. Farming has a huge impact on biodiversity, McAfee says, but “we would need to turn our food production system upside down” to meet production needs without negatively impacting native bees. That’s why we need more conservation efforts for all bees.

Morandin agrees and says comparing native and honey bees is like apples to oranges or, in another agricultural analogy, cows to wildlife. “Cows are important for our food, wildlife is important to so much more—natural ecosystems, carbon sequestration, biodiversity, water filtration, et cetera.” And before cultivated honey bees were used to pollinate large monoculture fields of pollinator-dependent crops, native bees did the pollinating—and still do. “What we really need to preserve for agriculture and for our natural ecosystems is diversity and that complement of bees rather than picking out one as really important.”

The vast numbers and spread of honey bees (there are millions of colonies in North America, and some billion honey bees) and the fact that they are generalists (as are native bumble bees) means they can forage for a variety of plants and add competition to wild species. There’s not enough long-term research to determine the extent of honey bees’ effect on natural ecosystems. McAfee once thought of honey bees as a “gateway species,” hopeful that awareness of their plight might help other bees too. She now says that if conservation of native bees (and all pollinators) is the goal, “plant some native flowers and maintain some land with suitable nesting sites, maybe even join the Native Bee Society.”

All pollinators—butterflies, fireflies, moths, beetles, bats and birds—need to be recognized, but bees—all bees—remain paramount. “Bees are considered the most important pollinators in most ecosystems and for most of our crops,” Morandin says. This is because bees evolved from omnivore wasps to become vegan and feed themselves and offspring with proteins from pollen and nectar collected with specialized “grocery bags.” These pollen-carrying structures are composed of plumose, feather-like hairs with an electrostatic charge that attracts pollen. It’s an incredible adaptation that’s taken place since that Cretaceous era of the dinosaurs.

The more we know about bees the more extraordinary they are, and the more we should heed Virgil’s words from 29 BC: “First of all, find a protected place for the bees.”