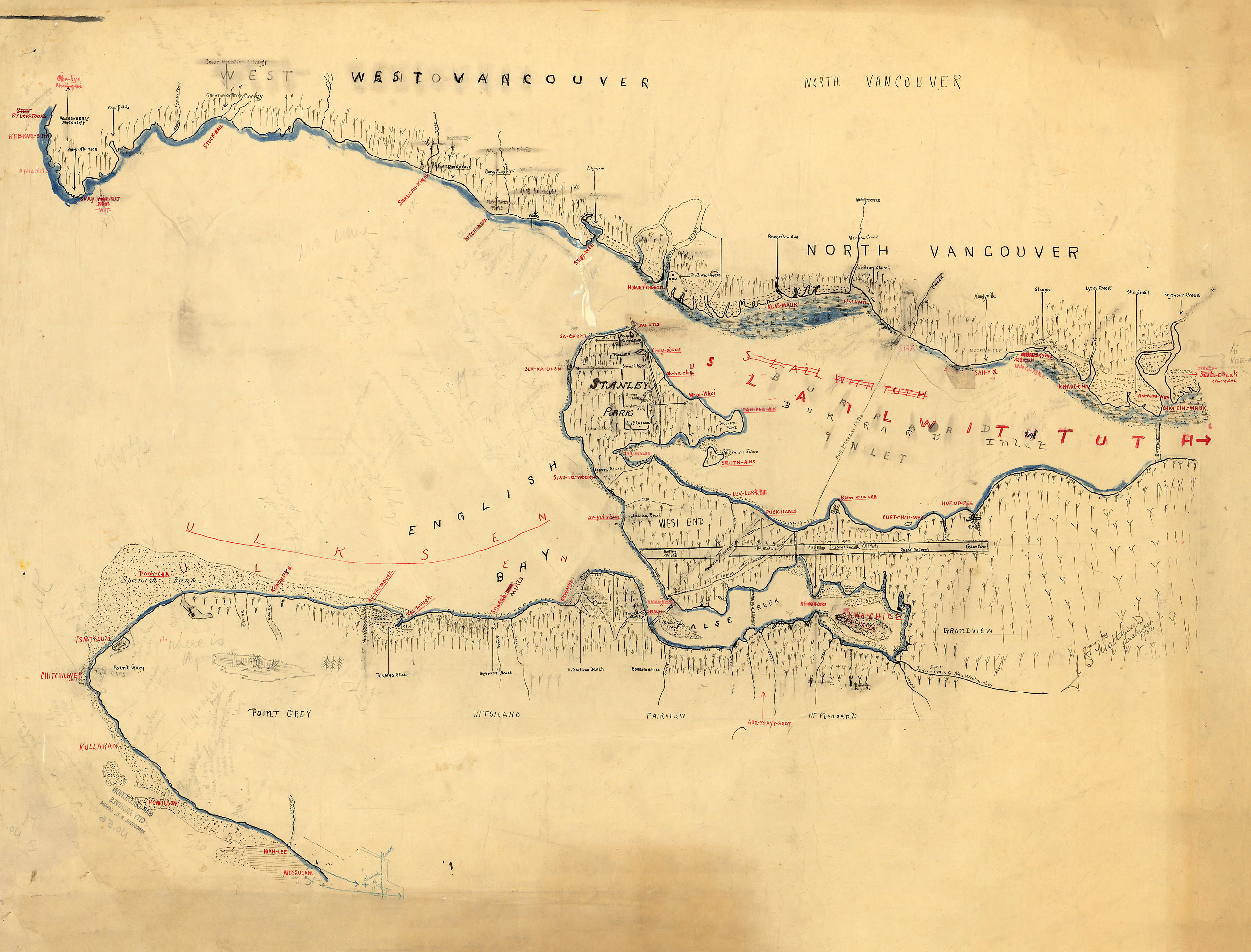 A hand-drawn map from the City of Vancouver Archives showing Indigenous villages and landmarks prior to European contact.

A lone kayaker skims across the sea—a mercury-glass mirror reflecting a forest of steel from my vantage point on the south shore of False Creek in Vanier Park. This land now known as Vancouver is the unceded territories of the xwməθkwəy’əm (Musqueam), Skwxwú7mesh (Squamish), and səlilwətaɬ (Tsleil-Waututh) Nations. A hundred years ago, I would have seen paddlers in a dugout canoe hand-carved from an ancient cedar tree.

In the early 20th century, this spot was a thriving fishing village called Seŉákw, interpreted as “the place inside the head of False Creek.” Home to the Squamish Nation, the land and waters provided sustenance. Wild cabbage and mushrooms. Salmon and smelt. In the summer, visitors from other Indigenous territories travelled here by canoe to gather food and commune with others.

Life was harmonious. But colonization eventually changed that. The village was replaced with Kitsilano Indian Reserve No. 6. From 1899 onward, parcels of land were steadily snatched up, first for the Canadian Pacific Railway, then the Rat Portage Lumber Company. In 1913, families were forcibly removed. Seŉákw was burned to the ground.

Since 1959, this land has also been home to the Vancouver Maritime Museum (VMM), which is showcasing Canoe Cultures: Ho’-ku-melh—War Canoes and the Gifts They Carry Forward (through July 3). “Ho’-ku-melh” means “to gather” in the Chinook Jargon that evolved on the West Coast as a trading language. I came to the exhibit to learn about the history and culture of the war canoe used for racing on B.C.’s coast and its enduring connection to community health, well-being, land stewardship, and activism.

“We have pictures of racing in 1890. And that was before Stanley Park, before Vancouver, before everything.”

Guest curator Roxanne Charles, a visual artist from the Semiahmoo First Nation, was careful to respect Salish protocol to ensure the voices in the space are heard. Charles did community consultation and sought out 20 artists (most of whom are from the three First Nations in Vancouver), asking each to decide what key messages to share through their work. “I tried to listen to the artists’ voices and also take into account the land that the museum was situated on,” she says. “I felt like that would be a very good opportunity for the settler community to realize all of these things that have been withheld from our education system, like the true history of the lands that we’re residing on.”

The rhythmic sound of drumming is part of the exhibit’s multisensory journey. Near the entrance is Mitzi, a 70-year-old dugout canoe made by Cedric Billy, father of Mike Billy Sr., lead carver of Canoe Cultures, an apprentice program committed to preserving the heritage art of canoe carving and building.

Billy Sr. expanded Mitzi to accommodate four paddlers, updated her with fibreglass, and later added carbon fibre to the hull. Canoe building may have evolved, but racing remains a team effort, where paddlers must pull together in unison and in tune with nature. Canoe racing, which is integral to Coast Salish culture, existed before colonization but became formalized in the late-19th century as entertainment for white spectators. During the potlatch ban that lasted more than 60 years, war canoe races allowed First Nations to gather and socialize.

Near Mitzi is Caitlin Aleck’s blanket, Creator, Take Us Home. The weaving of two canoes documents the recent revelations of genocide at residential schools. The artist’s statement reads: “Today I honour those children travelling home in their canoe back to the creator while we pray for them in ceremony and seek justice for their deaths.”

That heartbreaking history among other crises affecting Indigenous people remains unreconciled. When the federal Indian Act was passed in 1876, its main goal was to assimilate Indigenous people into settler society, preventing them from speaking their languages and continuing their spiritual practices. Amendments led to the establishment of residential schools and a ban on the potlatch, which disrupted and destroyed this cultural tradition of gathering to share oral histories. Festivals, dances, and ceremonies were criminalized too. But one cultural touchstone remained: the war canoe.

Colonizers considered canoe racing to be a sport, not a cultural activity. For Indigenous people, the canoe remained a spiritual practice on water and beyond. Since travelling and gathering are essential elements of Indigenous culture, it’s unsurprising that canoe racing increased during assimilation.

It’s hard to imagine the magnitude of one of the earliest canoe races documented, held in New Westminster in 1865 by Frederick Seymour (governor of the Colony of British Columbia) to honour Queen Victoria’s birthday. Seymour asked local Catholic priests to invite the First Nations, and an estimated 3,500 arrived in hundreds of canoes.

A few days later, I’m back on False Creek, this time on the north side near Concord Community Park, looking for the Canoe Cultures program’s carving tent, which is open to the public. Inside, Mike Billy Sr., whose hereditary Skwxwú7mesh name is Lemxacha Siyam, is continuing his own family legacy. A carpenter by trade, longtime canoe racer and now a coach, he’s teaching the art and science of canoe-building “handed down from my grandfather to my dad to me unbroken.” His young apprentices include his son and two nephews.

The scents of cedar and epoxy blend together as Billy spreads the adhesive across strips of wood on the racing canoe whose dimensions have been meticulously measured. He tells me his first recollection of the canoe was playing in one of his dad’s dugouts at the beach with his siblings when he was about five years old. Billy’s dad paddled for the North Vancouver Canoe Club. “We have pictures of racing in 1890,” he says. “And that was before Stanley Park, before Vancouver, before everything.”

Now 58, Billy learned to carve traditional dugout canoes when he was about 10. His father brought three cedar logs into the yard, one each for him and his two brothers. “He put us in front of the logs and said, ‘I’ll show you once and once only. You’ll probably get it, but if you don’t, you probably never will.’ That was his way of tough love, so he showed us step by step how to build canoes.”

Although they may not be carving 500-year-old cedars here, Billy says there’s something special about the 70-odd dugout canoes in the club’s racing shed. The ones carved 30 to 40 years ago seem to have a life of their own. I ask him if he thinks there’s something spiritual being transferred from tree to paddler.

“Other people who have used [my dugout canoe] actually tell me that it runs,” he says. “It’ll just pick up and run. I don’t know why. If you think about it, that tree is an entity that’s like four or five hundred years old. And it’s grown hundreds of feet above the ground. It was here—before contact with us here—for so long. I think the log chooses you, and it wants to become a canoe. If you’re lucky enough to get a log like that, and you’re good enough to build a good canoe, it’ll be fast and it’ll want to run.”

His words remind me of some of the materials listed on the artists’ statements at the VMM exhibit. Along with substances such as cedar, felt, and acrylic, I notice love, teachings, and magic. Roxanne Charles explains that it’s sometimes difficult to translate the oral word and its resonance and vibrations into text. “All of these gifts came back with the canoe,” she says. “It’s like a vessel for us to reconnect with the lands and waters, with each other, with our culture, our spirituality. When you’re out on the water, there are songs that have been floating on the water for thousands of years that people hear. I’ve spent probably 15 years on the water and witnessed really amazing things you cannot explain. And that’s why I put in the term ‘magic’—the potential that these things have.”

Respect and reconciliation are powerful. But so is action. The next generation of canoe carvers are creating today’s vessels for continued gathering. Seŉákw, the ancient village inside the head of False Creek, is reclaiming its name and being reborn as a community of the future. And all along the West Coast, the war canoe is bringing old and new together, creating ripples across the water in a timeless race.