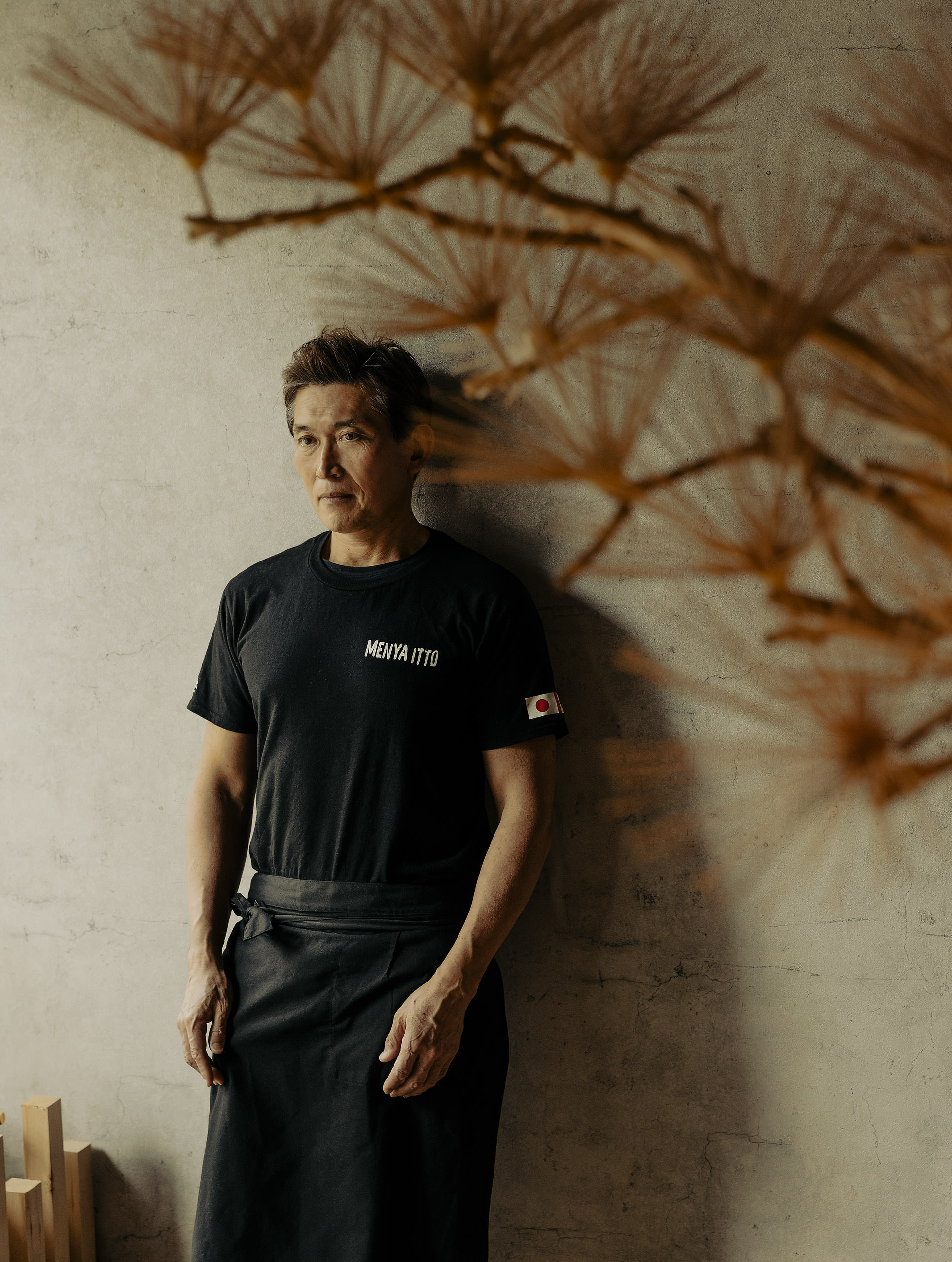 Yukihiko Sakamoto began his culinary journey at 18, initially training in classic French cuisine. When he turned his attention to ramen, his inspiration was tsukemen’s inventor, Kazuo Yamagishi.

There’s an educational process, Sakamoto suggests through his interpreter—an assertion supported by the step-by-step instructions at every table of the 30-seat, 1,800-square-foot Robson Street eatery. It’s also why, when we meet, the ramen master has been in the city for two months, hiring staff and training them to his exacting standards. For that reason, when Menya Itto launched in March, only 30 bowls of ramen were offered the first day and 50 on the second. They sold out fast.

Sakamoto began his culinary journey at 18, initially training in classic French cuisine. When he turned his attention to ramen, his inspiration was tsukemen’s inventor, Kazuo Yamagishi. According to one story, Yamagishi created his signature meal in 1955 as an apprentice, dipping noodles in leftover broth doused with soy sauce—similar to the traditional way soba (made from buckwheat) is consumed—for a staff meal. Yamagishi, who had no male heir and died in 2015, passed on his tsukemen knowledge to Koji Tashiro.

It was Tashiro, “son of the ramen god,” with whom Sakamato trained almost two decades ago before launching Menya Itto in 2010. For the past seven years, the chain, which has locations in Bangkok, Hong Kong, and Thailand, has received top rankings on Tabelog, a Japanese website similar to Yelp. At the busy Tokyo location, diners arrive to prepay for their meals at a ticket machine and return an hour or two later to eat.

Does Sakamato’s lineage from the ramen god make him a ramen divinity too? From his meticulous, trim appearance and fine features, the 54-year-old has at least the aura of a celebrity, perhaps a televangelist. The quasi-religious zeal of tsukemen comes across in the name of his ramen shop, which translates roughly to “one lantern”—blazing a metaphorical path, Sakamoto explains, for others to enjoy this particular noodle style.

In his kitchen, Sakamoto is less a god perched on a celestial throne and more a craftsman in a house of worship. One morning before Menya Itto opens for its lunch service, I watch him carefully assemble a bowl of tsukemen. The noodles, thicker than ramen served elsewhere, are made from seven types of flour to accent their chewiness and topped with slices of pork loin, pork belly, and chicken (all prepared sous vide) and an ajitsuke egg. 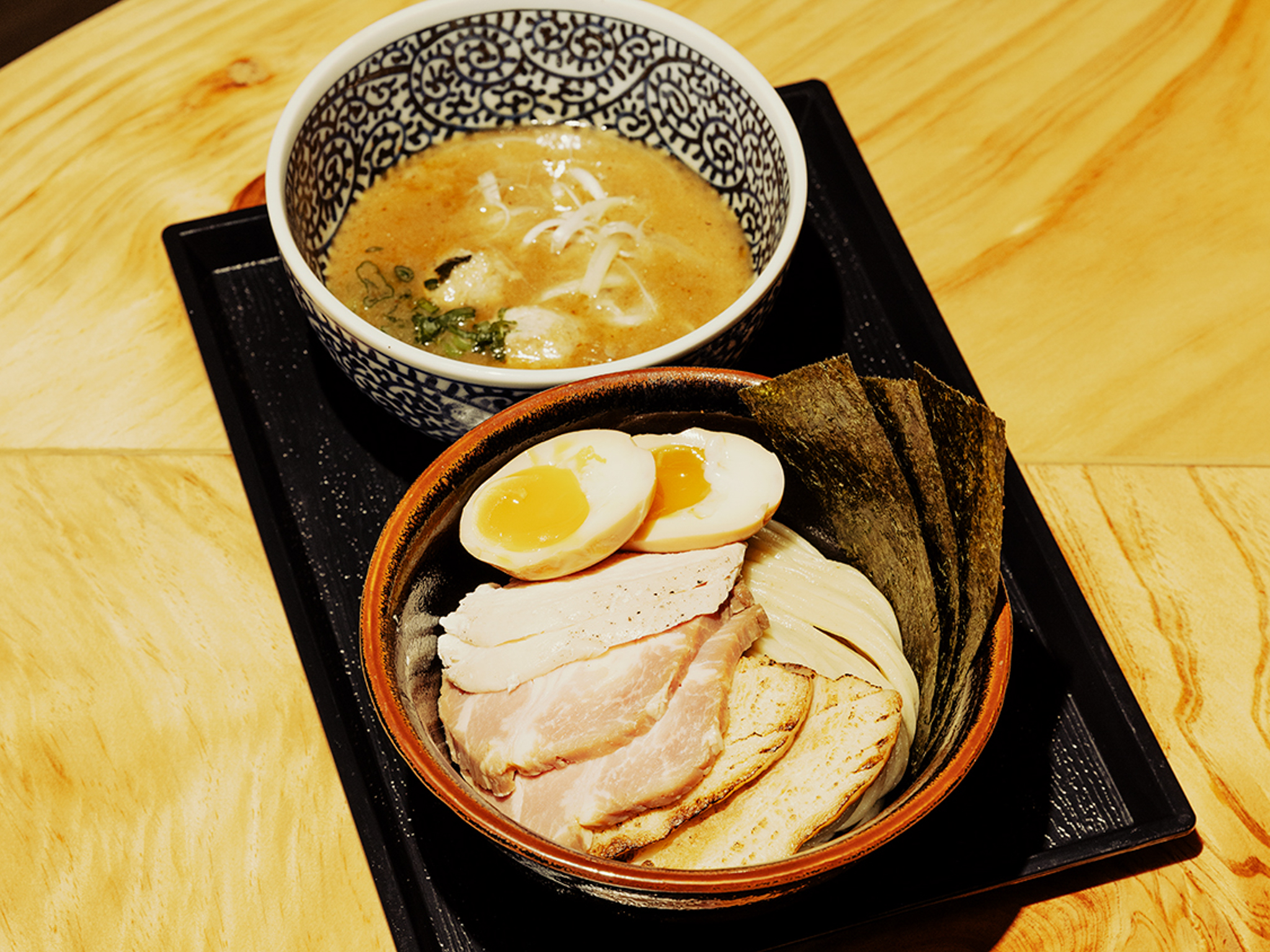 Does tsukemen taste like you’ve died and gone to heaven? If you crave umami, then yes, definitely, walk toward that lantern light. Simmered over 15 hours, the flavour-packed, chicken-based broth, with added seafood, is the meal’s beating heart. “Making tsukemen soup takes a lot of work,” insists Sakamoto, who’s cagey about his process and ingredients. “It’s rich and very concentrated. It’s easy to burn.” The finished broth is served bobbing with pickled scallions, bamboo shoots, and small chicken meatballs, given a pleasantly crunchy texture from cartilage ground with the meat.

I take a seat in this bright and calming space with its beautifully crafted pine tabletops and a square communal area dominated by a striking tree feature. Eating the tsukemen placed in front of me, I feel the focus placed on each element. I can also see how the serving style might be preferable to ramen in steaming broth on a summer day. After I finish my protein and noodles, I am handed a thermal carafe of fish broth to pour into the remaining broth, more a gravy at this point, and happily slurp it down.

Menya Itto also serves ramen that comes already swimming in a chicken-and-seafood broth. It could be described as traditional or classic if it weren’t for the noodle dish’s lineage and versatility. Even the word “ramen” is not Japanese in origin: it comes from the Chinese word lamian (“pulled noodles”), although theories differ about how the wheat noodles became popular in Japan. Kansui, a combination of potassium carbonate and water worked into the wheat, gives the noodles the chewy texture and jaundiced hue (in a pinch, a few tablespoons of baking soda in your pasta pot will turn dried spaghetti into an acceptable ramen-noodle substitute). 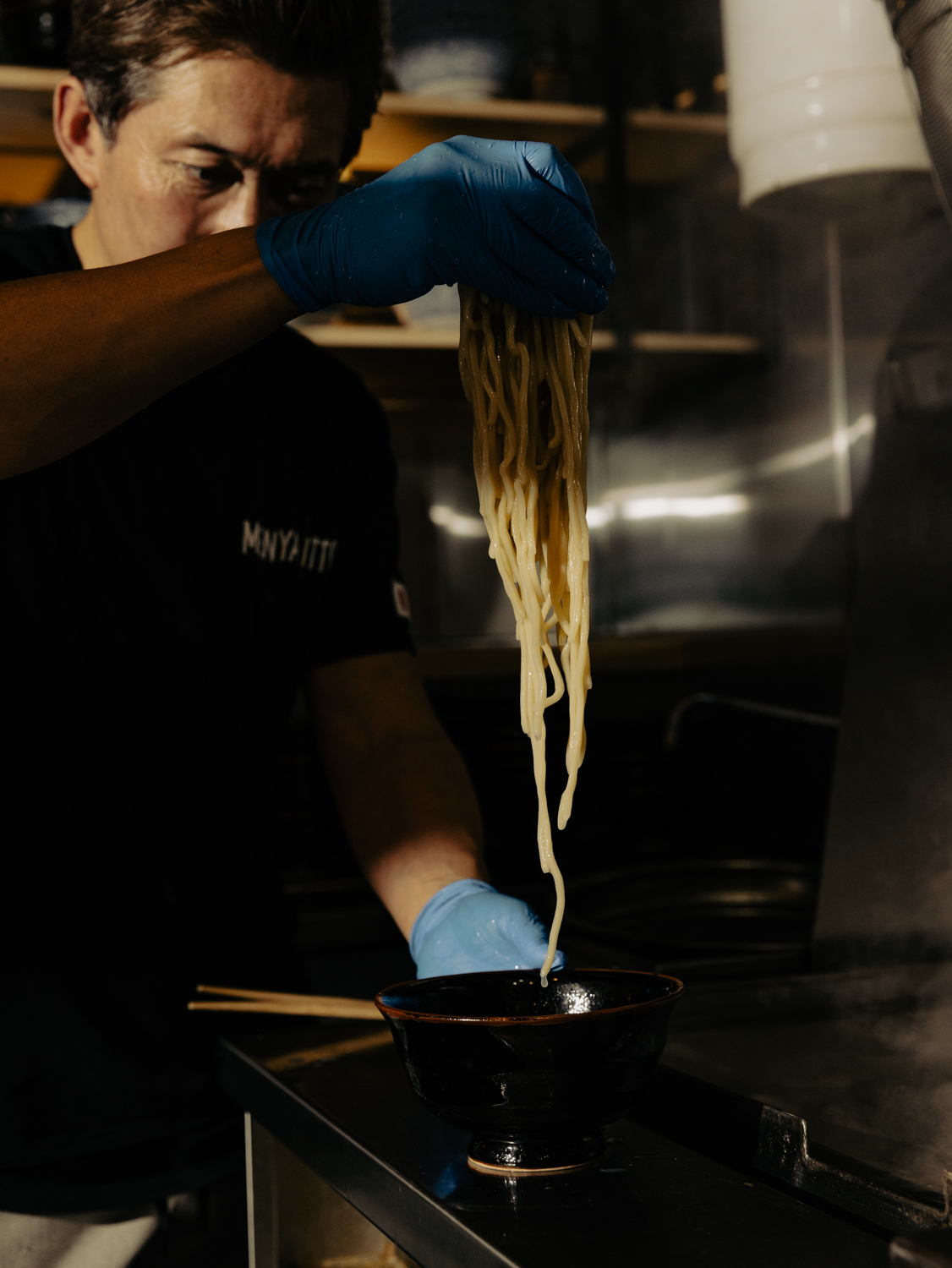 Tsukemen noodles, thicker than ramen served elsewhere, are made from seven types of flour to accent their chewiness.

Shortly after ramen arrived in the country, Japanese ingredients such as pickled plums, seaweed, and naruto (the distinctive fishcake with a pink swirl in it) were added. The tare, or seasoning base, placed at the bottom of the bowl to flavour the broth, is another uniquely Japanese element. Tare bases most commonly feature soy (shoyu), salt (shio), or miso.

After the Second World War, ramen’s rise to prominence in Japan was aided by geopolitical and technological factors. To stave off hunger, and the threat of Communism, in the years following Japan’s defeat, the United States exported surplus wheat cheaply, American propagandists encouraging wheat-based diets. And then in 1958, Momofuku Ando, the Taiwanese-born founder of Nissin foods, introduced instant noodles to the world, flash-frying ramen that could be reconstituted quickly. (He also brought to market the first Styrofoam-packaged Cup Noodles in 1971.) In a 2000 poll, the dorm-room staple was named Japan’s greatest invention of the 20th century, beating out the Walkman and karaoke. For most North Americans, our first taste of ramen comes from the instant version, an experience akin to being introduced to pasta through Kraft Dinner.

And yet in Japan, there are museums devoted to ramen and instant ramen, while more recently, Korean American celebrity chef David Chang has helped elevate the dish globally from a quick subsistence food to a coveted fusion item in his restaurants, named in homage to Momofuku.

As I step out of Menya Itto late morning, my belly full of noodles, the lines are already forming for ramen shops that have dominated the area ever since Kintaro, a mainstay going back to 1999, established a noodle beachhead in the West End. Today, we can select from Ramen Danbo’s Kyushu tonkotsu, a pork broth from the Fukuoka region made creamy from boiling down pig fat and collagen (supposedly excellent for your skin); Hokkaido Ramen Santouka, famous for the miso-inflected broth served in northern Japan; and the prized chicken broth base of Marutama Ra-men.

Lineups for food invoke specific types of nostalgia for me. On weekends, as twentysomethings gather outside popular breakfast spots around town, I think about the idleness of young life and the time they have for friends one loses in middle age. It’s the sight of people waiting for a tasty meal that satisfies my unacknowledged craving for the churn of city life.

For restaurateurs, these lineups are also welcome. According to Sakamato, his business dropped 20 per cent as a result of the pandemic. Safety measures in one Tokyo ramen shop still forbid diners to talk. And despite everything, I have to admit, the quiet of a restaurant interrupted only by slurping of soup (something I allow myself to do even in non-Asian restaurants, to the horror of dinner companions) would be music to my ears.