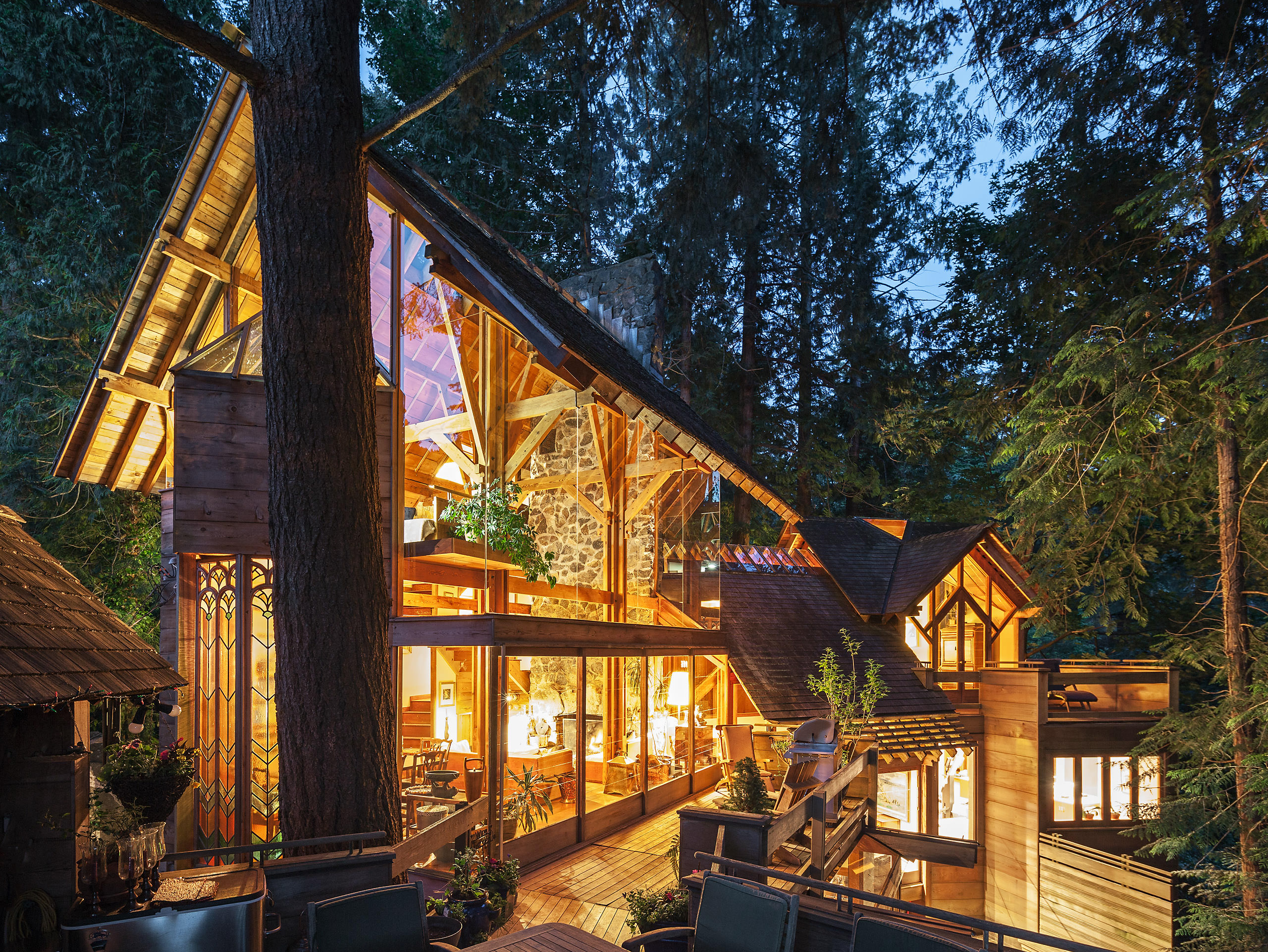 Step inside the 1972 Merrick House and enter a curvilinear labyrinth on 17 different levels, an enchanted jungle crafted in wood and glass and fieldstone. “I didn’t have any money, but I had time and a zillion ideas,” explains its architect, Paul Merrick. “It was all about how much fun you can have playing with space using two-by lumber.”

With two-by-fours, two-by-eights, factory offcuts, and salvaged materials, Merrick concocted one of the most distinctive houses of the halcyon era of West Coast architecture. He also raised his young family there until selling it in the mid-1980s. It’s still standing, nurtured by proud owners, and it’s a star attraction of the West Vancouver Art Museum’s home tour this summer as well as the museum’s retrospective of Merrick’s work. (The exhibition runs June 8 to July 23.) “It’s exciting to see an architect able to shift between the heritage projects and contemporary projects in a very fluid manner,” says the museum’s administrator and curator, Hilary Letwin. “He brings history into our contemporary age.”

When he conceived the house, Merrick was living in a North Vancouver cottage with a young family and a raft of high-profile projects, including the transformation of Vancouver’s Orpheum theatre, the city’s CBC Broadcast Centre, and the design of key buildings at Trent University in Ontario. Like many ambitious young architects, he hankered to design his own family home. “First, I had to get the lot,” Merrick recalls. “I had to borrow every nickel from my local banker.” Then he scouted for building materials. Every week, more materials would land in Jack’s New & Used Building Materials on Still Creek Avenue, and Merrick would prowl its inventory for a one-of-a-kind rosette window or a pallet of odd-shaped glass offcuts. He would then alter the design to fit his bounty—the reverse of the usual formula of drawing up a rigid plan and ordering the stock materials afterward. That is why the Merrick House is full of surprising shapes and details—and why, despite its apparently beyond-the-rational appearance, Merrick considers himself a modernist, making the best use of whatever materials are at hand.

In a 2017 monograph about the house, author-architect Tony Robins described it as “eccentric and outrageous,” adding that “it is not a house anyone would contemplate designing, or indeed be allowed to build, in the 21st century.” He meant that as a high compliment. He noted that one of the home’s simplest features is also the most poignant: its solid-wood front door. The wide rectangular door was originally Ron Thom’s drawing board, repurposed by Merrick as an homage to his modernist mentor. Robins called it “an overt symbolic reference: the portal not only to the house but also to Merrick’s architecture.”

Merrick’s design values and vocation began taking shape in the mid-1950s, when as a teenager he watched the progress of a Ron Thom house under construction during his morning walks to high school in West Vancouver. He remembers thinking to himself, “If that’s what architects do, then I want to be an architect.” Years later, after architecture school at the University of British Columbia and an apprenticeship at Thompson, Berwick & Pratt (where he was Ron Thom’s protégé and later became a partner, then chair), he joined the team designing Trent University in Peterborough, Ontario. Merrick’s design work for the Bata Library and Faryon Bridge has become the stuff of legend. And these landmarks were created with the same kind of imaginative geometry that animates the West Vancouver house.

Building a house like this is an act of courage and a leap of faith—and so is buying and living in it. Nobody knows this better than its current owners, Jeanette Langmann and Ali Johnstone. But the term “owner” seems inadequate for a home like this; they have served as its custodians, curators, patrons, and advocates since purchasing the property in 2012. Langmann, an art dealer and director of Vancouver’s Uno Langmann gallery, first entered the house at the behest of its previous owner. “He thought that since I had an art and antique gallery, I’d know people who might want the house,” Langmann recalls. But the minute she strode into its flagstone foyer, she fell in love with it herself. “I phoned Ali right away and said, ‘We’ve got to buy this house.’” The fact that they weren’t even in the market for a house was irrelevant: one look was all it took.

The house is perfectly symbiotic with their respective fields of expertise. Langmann—the art dealer—finds boundless joy in its artistry. Johnstone—the professional builder—is in awe of the “mind-boggling” brilliance of its construction engineering. Instead of a simple post-and-beam supporting frame, the house is an intricate network of small structural members bolted together in such a way that the thousand tiny parts coalesce into a surprisingly strong and cohesive whole.

It’s not the sort of house that lends itself to an easy label. Modernist? It looks and feels nothing like the flat-roofed houses designed by Ned Pratt and Arthur Erickson. Whimsical? Not really, since every rooflet, canted wall, and sliver of window has a purpose, be it a strategic view to the surrounding cedars or a nod to the contours of an irregular lot. Fantastical? Yes, it looks something like a treehouse or a fairy tale—except the complexity of its structure belies such child-centric analogies.

“These categories and terminologies, they’re dangerous,” Merrick says. “Not everything fits every category.” Then and now, Merrick defies the penchant for austerity that has characterized so much of our postwar built landscape—as the West Vancouver Art Museum exhibition shows in his subsequent work on such buildings as Cathedral Place, the Marine Building, and the new residential complex at Sewell’s Landing in Horseshoe Bay.

He and his colleagues at Merrick Architecture have evolved their practice over the years, but they still refuse to be straitjacketed into a rigid preconception of what contemporary architecture should be. “An important part of what we do is creating an environment that has delight,” Merrick says. “And delight often comes from little things that your eye can fall upon.”