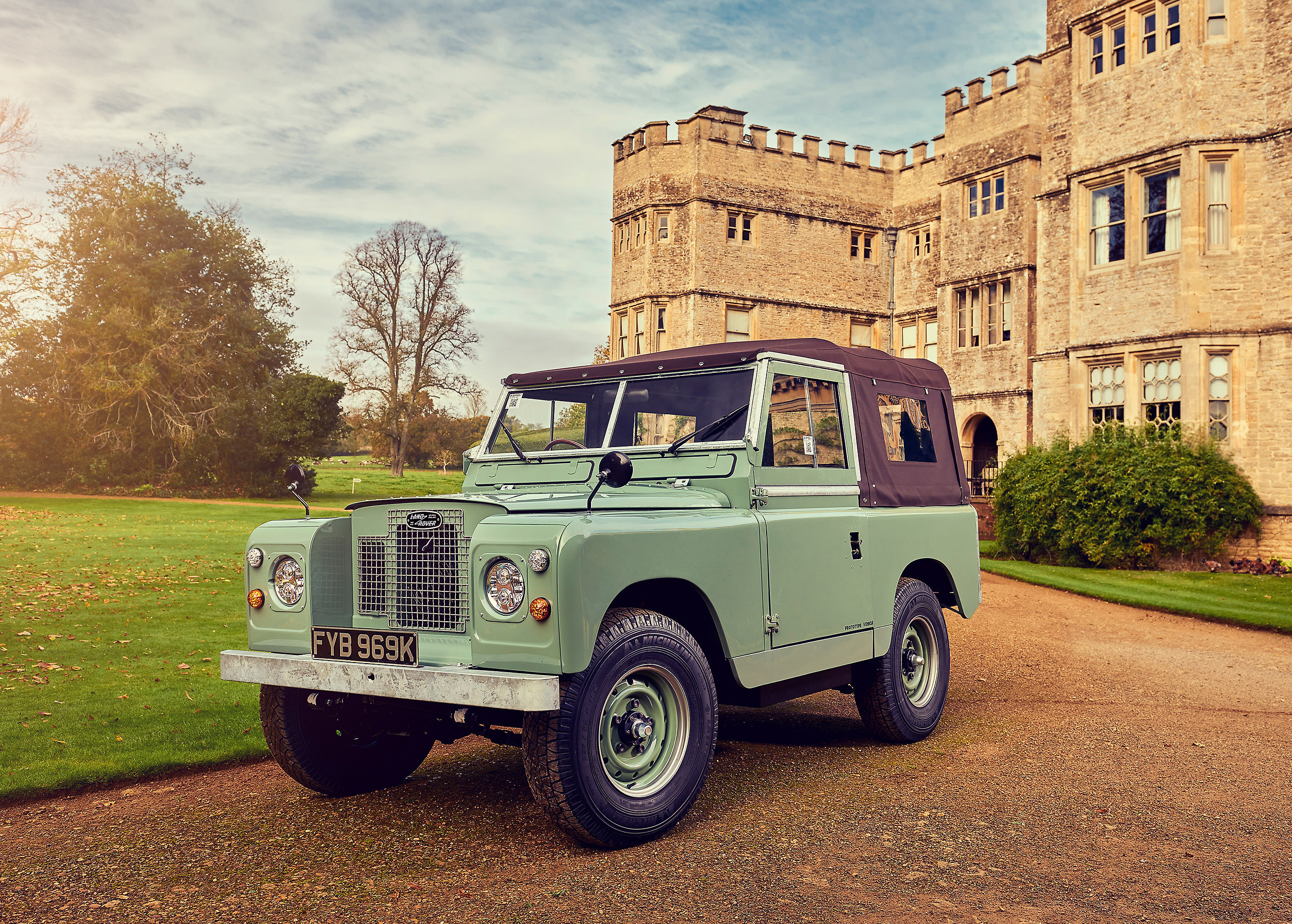 As the sun struggles to break through the lingering winter mist over Windsor Great Park, ghostly silhouettes of dog walkers and horse riders emerge momentarily before disappearing just as quickly. The grounds of this historic park were, until recently, where Queen Elizabeth II exercised her horse. But I’m not here to admire four-legged horsepower—it’s the four-wheeled kind built by the team at Everrati that interests me.

Founded in 2019, Everrati is in the business of extending the lives of iconic classic cars by turning them into all-electric vehicles, reconceiving these fossil-fuel burners into beautifully engineered, fully electric, zero-emission, and still-desirable cars, more powerful and arguably more rewarding to drive than in their original form. The modifications on vehicles such as the Land Rover Series IIA (fitted with a 150-bhp/221-pound-foot electric motor and a 60-kilowatt battery) enable a driver to enjoy a cherished vehicle in a low-carbon world.

Outside the Guards Polo Club, within the Great Park, two of these electrified Land Rovers accompany fintech millionaire and Everrati founder and CEO Justin Lunny and his partners Nick Williams and Mike Kerr.

Lunny lived opposite Windsor Castle when the royal wedding of Prince Harry and Meghan Markle took place. He watched them drive off in a prototype electric E-Type Jaguar, and something clicked. Believing in the future of clean tech, Lunny saw a chance to combine his passion for cars with his passion for technology. “Also, my now 11-year-old daughter, who was about seven years old at the time, had become very worried about climate change, waking in tears after nightmares about the world flooding,” he recalls. “I wanted to make a positive change for her future.”

In 2016, he sold iCheque, his fintech business, and founded Everrati. Fast becoming internationally recognized as the world’s leading retro-electrification brand, the company gathered momentum through 2021, opening Everrati North America earlier this year in response to interest from both Canada and the U.S.

One of its first customers was a successful Californian “sustainable tech” guy in his thirties, who had wanted a Porsche like his father’s 911 since childhood but was also committed to only buying a classic car if it was electric. He fit the Everrati profile perfectly: company research has identified wealthy millennial and Gen Z consumers with a strong environmental conscience as a target market. They want iconic, classic cars but also built-in sustainability; they don’t care what’s under the hood so long as it delivers on clean tech.

Though companies offering electric conversion services or kits have proliferated, Everrati’s model is different. It redefines the prized classic car for a new era, redesigning the end-to-end operation while retaining the character and feel of the original.

The vehicle is scanned, weighed, and studied until the team understands it inside out. The powertrain is removed before another scan and weight are taken. Once the space available for the motor, battery, electronics, and so on are identified, the car is tested repeatedly until Everrati can sign off like an original manufacturer. Then the cars are built to order, retaining the original chassis and structure (unlike conversions) and ensuring all work is reversible.

Nick Williams, Everrati’s COO and an ex-Daimler and VW man, met Lunny while a spectator at Le Mans. “Justin and I shared a vision—substituting 20th-century displacement for 21st-century kilowatt-hours,” he says. “We started the chat about how we would create a classic EV car and started dipping into the marketplace. We soon realized how unstructured it was and that there was a real space for turning classic cars into EV classic cars,” he continues. “We decided that if we were going to do this, we would do it in the same way the manufacturer would have, meaning the same quality, safety, replication, and everything else—as if Mercedes-Benz, VW, or Porsche were going to do it at the time—and that’s where we started.” 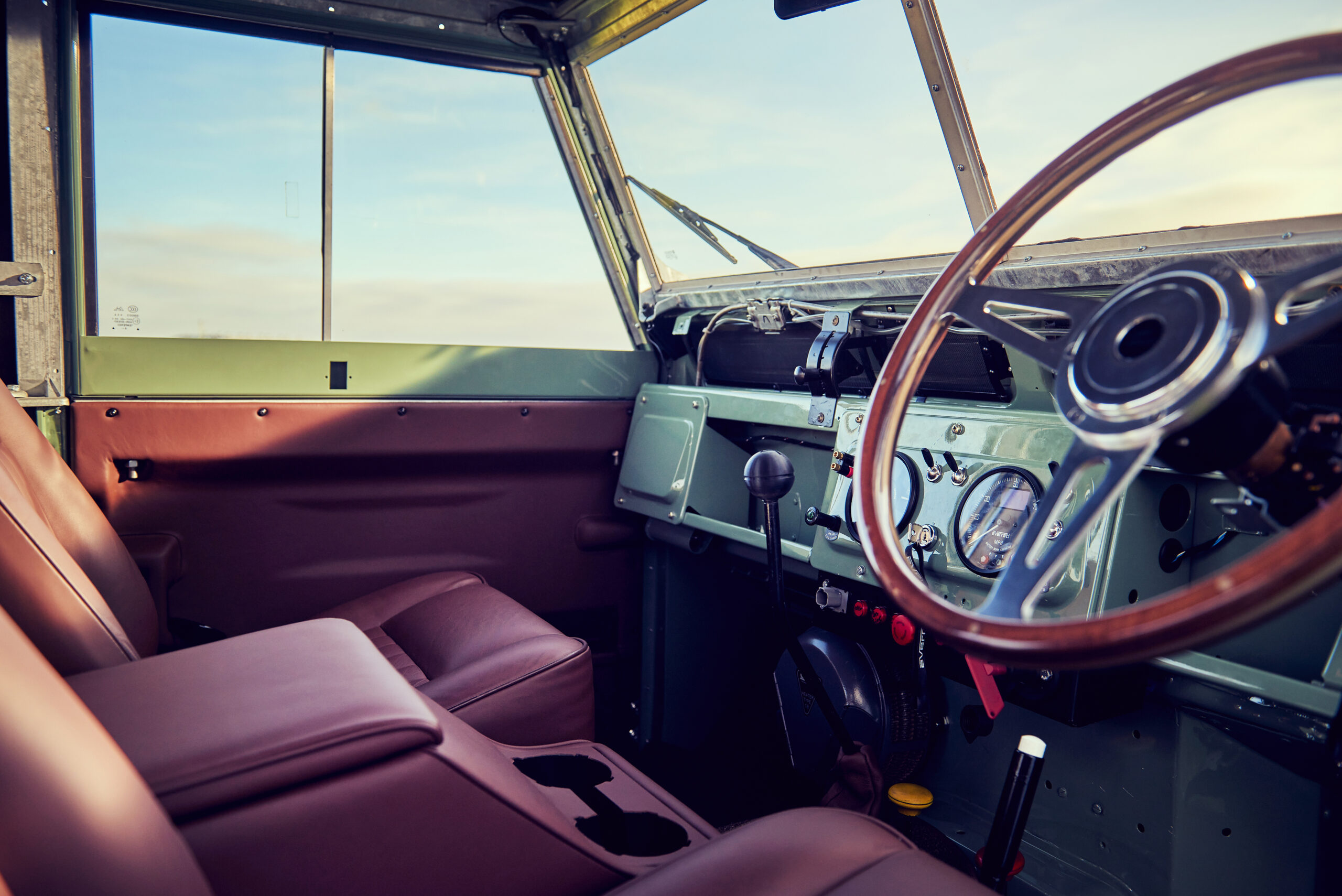 Everrati’s model redesignes the end-to-end operation while retaining the character and feel of the original Land Rover Series IIA.

Taking a turn in the electrified Land Rover, the immediate difference is the quiet—a facet of EV not all car enthusiasts appreciate and something Everrati understands. For those who miss the noise of its old roaring engine or crunching gears, the company created an app that simulates engine noises that can be played through a smartphone and out of high-end installed speakers.

The sustainability focus is not reserved to the mechanics: Everrati sources low-carbon-footprint upholstery leather from Bridge of Weir in Scotland.

“The vehicles we already manufacture take around six months from start to finish—the biggest part of that being the restoration of the vehicle,” Williams explains. “It’s time-consuming and requires very artisan skills.” Customers also arrive with bespoke requests, which take a lot longer—over 12 months. The company is developing a front-engine, rear-drive configuration, which fits American muscle and classics as well.

With experience in motorsports, Mike Kerr heads up engineering development and production. His passion for cars was, he says, heavily influenced by his grandfather, Joseph Kerr, who was a toolmaker for Rolls-Royce Derby during the Second World War. “I feel very privileged to have worked on some amazing vehicle projects during my career, including F1 racing engines, Paris Dakar-winning vehicles, the McLaren Senna and Speedtail, and the Lotus Evija,” he notes. In the early aughts, he bought a German LHD Porsche 911 (964) Coupé, which he still owns and drives today.

Everrati’s Porsche will do up to 200 miles on a single charge. If you have a home charger, you can wake up every morning with 200 miles ahead of you to enjoy. Each vehicle has fast charging, meaning it can recharge from 20 per cent to 80 per cent in about 40 minutes.

According to Lunny, the demand for classic and luxury electric vehicles is still in its infancy. “Most realize that it is no longer acceptable to drive a car that emits its own body weight in CO2 every two or three miles,” he argues. He believes even those still opposed to electrifying cars will eventually see that the sort of work Everrati does is the most viable way to keep classic cars on the road—and that cars with combustion engines are far more likely to lose their value.

“The market for engaging—and fun—cars is,” he insists, “going to explode.”