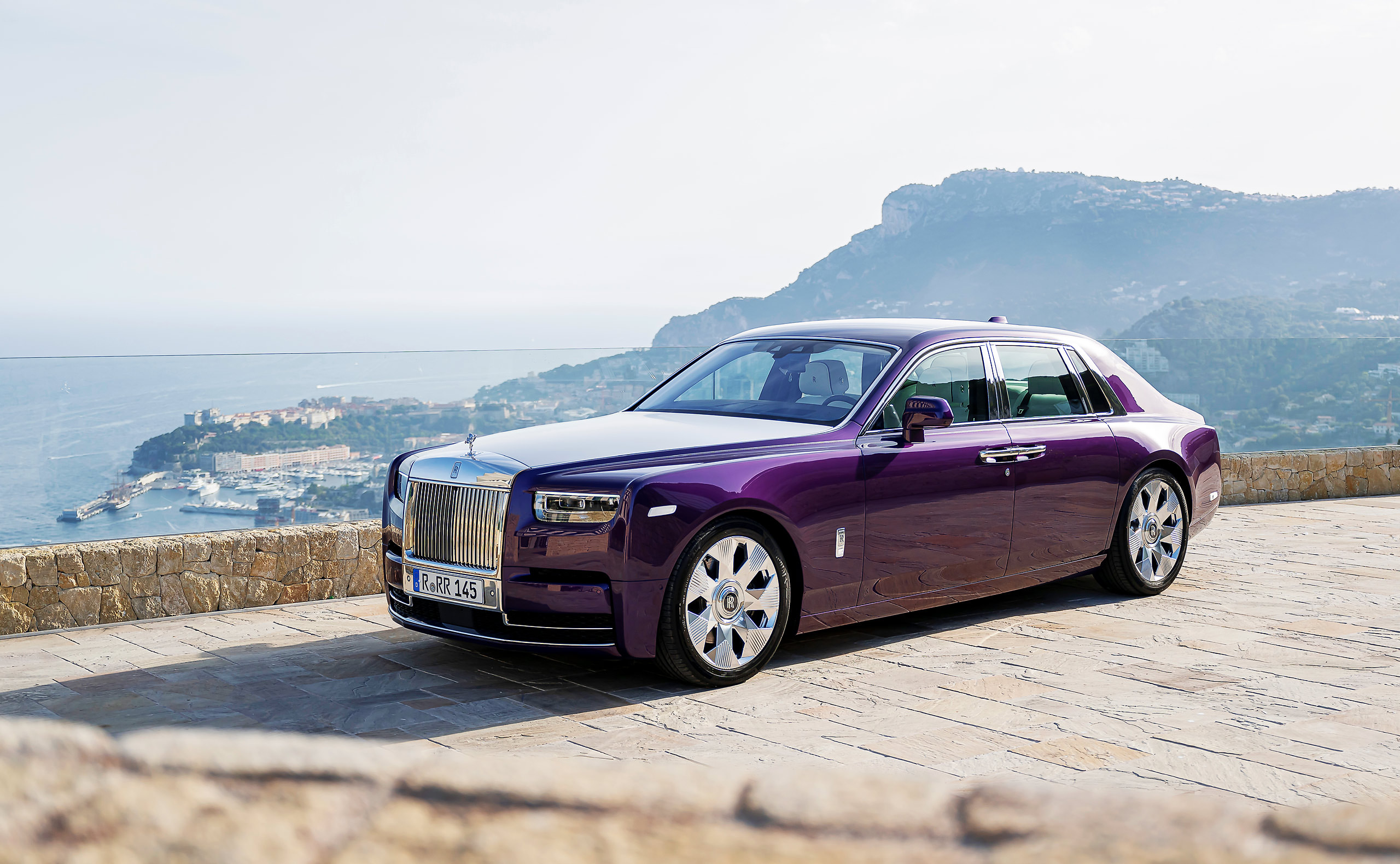 We have pulled over for a moment to take in the view. High in the hills above Nice on the Côte d’Azur, the landscape is too beautiful to simply pass through. A small silver Renault parks behind us, but the focus of its Belgian passengers turns not to the incredible scenery but to us—or rather our car for the day.

It is undeniably a showstopper: the latest model Rolls-Royce Phantom Series II. The Phantom is one of the iconic vehicles of the world, without question, but this model is also resplendently, unapologetically, purple, and it shimmers magnificently in the sunlight of the French Riviera. The only thing quiet about it is the engine. Among a selection of eight differently coloured and accented Phantoms unveiled for the weekend event, “The Extrovert,” as it is titled, was the one I was determined to take out for a ride.

People regard you differently when you have the keys to a Rolls-Royce. “Are you an African prince?” Kenny, the journalist from New York I met at dinner last night, is asked. He grins broadly and nods. I put on my plummiest English accent and add that I am a friend of the Queen.

Our Belgian friends leave us all smiles and with a rather tall story we hope they will dine out on for a while.

Having never set foot in a Rolls-Royce before, I am apprehensive about taking the wheel. There is nothing small about this sedan and nothing generous about the roads we are navigating. The first thing that strikes me is how quiet it is—something Rolls-Royce has been known for since its earliest models—and how ridiculously smooth it is to manoeuvre; there is no sense of contact with the ground. The ephemerality of the names bestowed on the fleet—Phantom, Ghost, Spectre—now makes perfect sense.

Later, we experience the car the way many owners do: as passengers seated in the rear, chauffeured in total comfort. It’s easy to be seduced by the wide, soft seats and generous leg room, never mind the mini fridge behind the arm rest, capacious enough for a good bottle of Champagne. But it’s after dark when the magic happens, as the ceiling of the Phantom comes alive with tiny sparkles—the brand’s trademark Starlight Headliner.

This illusion of the night sky is available in whatever design you choose—you could have the constellations set to mark a significant date in your life, for example. Of course, you may customize your Phantom even further, to whatever degree you desire: inlaid embroidery, fabrics, textures, colours—the bespoke team at Rolls-Royce is at your service.

Nice and its neighbour Monaco (where we are based) are hardly strangers to luxury. Here, the see-and-be-seen game is at a completely different level. It’s the perfect location for the reveal of the subtle but effective design changes for the Series II model—a horizontal line added to the now-illuminated grille, laser-cut bezel starlights inside the headlights—because, despite the sensory overload of supercars and designer labels here, the Phantom still turns heads. There is something about a Rolls-Royce that holds a special allure; in the world of fine automobiles, it is surely the pinnacle. We refer to something as the “Rolls-Royce” of its kind for a reason.

The venue for unveiling the new model Phantom was chosen, we are told, not just for the luxe surroundings but also to link to the brand’s heritage: in the years before his death in 1933, an ailing Henry Royce overwintered a couple of hours’ drive to the west of where we are staying, in La Canadel. He was 70, his poor health a result of his humble beginnings.

The next week, I am in England, staying overnight at The Midland Hotel in Manchester. I book the room on a whim because I know it was where, in 1904, Royce—who, that year, had built his first car in the corner of his electric parts workshop—signed the partnership deal with Charles Rolls, an aristocratic transportation enthusiast who had opened one of the U.K.’s first car dealerships.

A few days later, I’m at the other end of the country, on the south coast, watching a tiny ferry sail back and forth across the short stretch of water between Hengistbury Head and Mudeford in Dorset. I look down at a flyer detailing a longer cruise and am taken aback to see Charles Rolls’ name. It turns out this is where, in 1910, his Wright Flyer crashed, making him the first Briton to be killed in a powered aircraft, just six years after joining forces with Royce.

Taking a moment to consider the degree of detail, craftsmanship, and design excellence of the new Phantom Series II, I can only marvel at how a specific vision conceived more than a century ago not only endures but continues to push the boundaries of excellence.