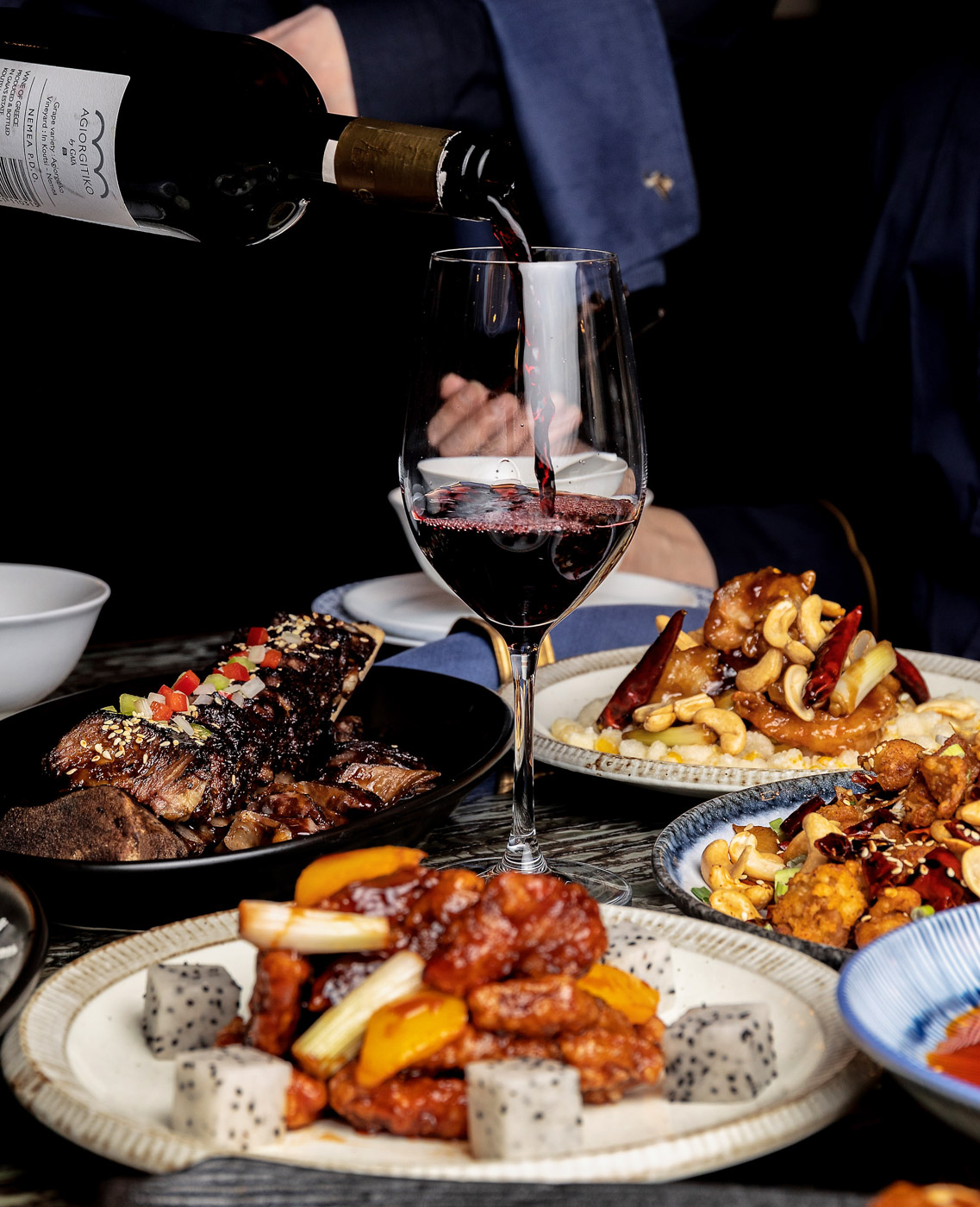 When I was growing up in Vancouver in the 1980s and ’90s, my family gathered for celebratory banquets at Cantonese restaurants. When my parents hosted, they pored over the menu, selecting dishes to demonstrate to our guests how much we cared about them. While the grown-ups chatted, I played with my chopsticks and waited for a favourite food on the lazy Susan to make its way to me. Numerous cups of tea were poured, but little in the way of alcohol. Sometimes, one of my uncles nursed a beer throughout the meal. And on special occasions, a nondescript red wine was ordered. For the longest time, I believed Chinese food and Western alcohol were incompatible.

But a lot has changed, even since 2001 when I encountered modern Chinese dishes paired with local wines and cocktails at the now-shuttered Wild Rice—its location between Chinatown and the downtown core symbolizing the shifts underway in Vancouver’s Chinese community. Although in elementary school I was one of the few Chinese kids, by high school and university, the handover of Hong Kong had increased diversity. My family began to frequent new restaurants that appealed to Hong Kong tastes. More recently, the economic rise of Mainland China has brought another wave of migration, changing the restaurants in town and the calibre of their drink programs.

With China now one of the world’s largest consumers of wine, the Chinese palate is clearly undergoing a significant shift. “As an economy develops, having an interest in wine and spirits is a natural extension of taking an interest in the food that you are eating,” says Lee Man, Critics’ Choice judging chair of Vancouver’s Chinese Restaurant Awards.

Man connects the increased passion for European wines and spirits, especially premium ones, to long-held Chinese traditions. “There really is an idea of understanding quality. The history of Chinese dining is thousands of years old, where nuance, balance, and subtlety mean everything,” he says. And with Vancouver’s demographics, drink trends across the Pacific affect menus in Vancouver. 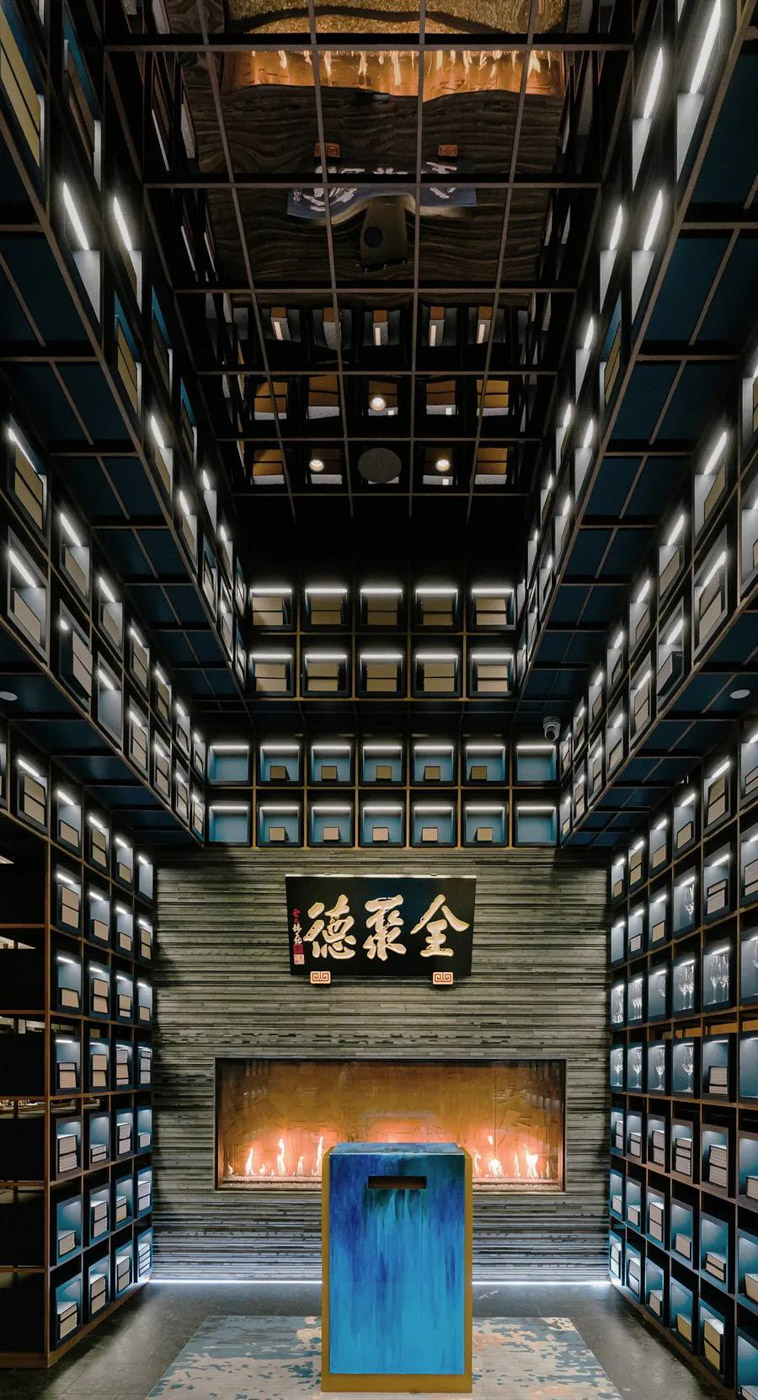 At Bamboo Grove, one of Richmond’s oldest restaurants, owner David Jue notes a change in his customers’ drinking habits. They come to his restaurant with sought-after French wines, such as rare vintages of Bordeaux, many of them savvy, others less experienced but eager to learn from his expertise. Jue’s own journey began decades ago when a good friend introduced him to wine. “I like drinking, so I think that’s why I know a lot about wine,” he chuckles. He enthusiastically serves as educator, teaching diners how to taste and appreciate their selections, and when and how to decant a wine.

While he scoffs at a formal wine list, Jue does have a selection of prized wines, many of them Burgundies, which he sells to customers who want something unique. “Seventy per cent of my collection is all gone. Once they know a wine, they buy it.”

When Robert Stelmachuk became wine director in Vancouver for Mott 32 (pictured on previous page), he first worked at the group’s Hong Kong location to learn about the food from a sommelier’s perspective. “The diners at Mott 32 that I experienced when I was there in the summer of 2016 were, as they are here, very sophisticated. They’re wine savvy. Overall, they know quite a bit more now than they certainly did 10 years ago,” he says. He finds the same knowledgeable wine drinkers at Vancouver’s Mott, many of whom bring prized possessions from their cellars to share with their guests.

Stelmachuk argues Chinese cuisine lends itself to high-quality wines because of the complex flavours and interplay involved in family-style eating. “At any one time, there could be four or five dishes on the table. There could be something warm, something cold. There could be a spicy dish. There could be a savoury, umami-based dish, so I need to have one wine that can land on all those things,” he says. Syrah, especially from the Northern Rhône, and Chianti Classico are particularly popular because, he says, they pair beautifully with Mott’s cuisine. 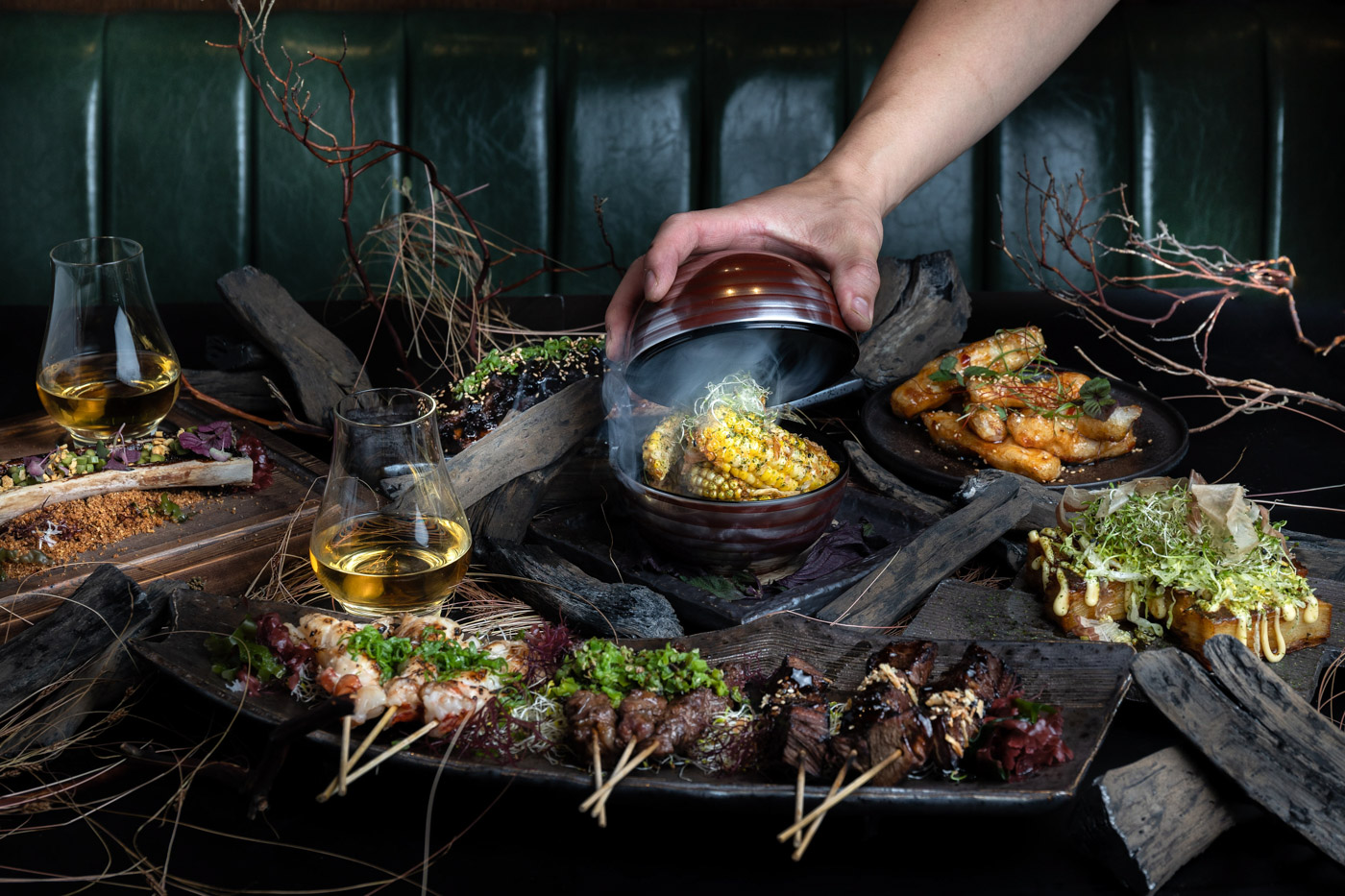 Cask Whisky Vault at the Versante. Photo by Leila Kwok.

Chinese diners who revel in sophisticated balance in their food are open to Stelmachuk’s suggestions. Instead of a pinot noir, he recommends other light-bodied, fruit-forward selections, such as a cinsault or classic light Valpolicella. He also likes sharing small-production gems. He raves about the Scholium Project 1MN 2015, a cinsault from the Bechtold Ranch Vineyard in California. “They made only 100 cases of that wine. That’s pretty ridiculous.”

For him, the discernment of Mott’s patrons is evidence of an evolving sense of premium dining. “I think diners nowadays are looking for more of a complete experience, a different style of service, a great cocktail program, and a deep wine program.”

The new Cask Whisky Vault aims to redefine luxury by pairing izakaya-inspired cuisine with whiskies in a gorgeous room. Cask is part of the Versante Hotel complex in Richmond, and its location, with its vibrant and diverse Chinese population, lends itself to impeccable quality.

With interest in premium whiskies booming in China, many of Cask’s clientele show extensive knowledge about how to appreciate the spirit. Customers are encouraged to try intriguing finds such as a 10-year Arran single malt, while at the same time, Cask’s deep list traces the cultural shift from Western-based whiskies to Asian offerings from Japan. It also serves flights: The Rare Breeds spotlights a 27-year Inchgower, a 25-year Glenrothes, and a 25-year Auchroisk. The aged whiskies play nicely with a decadent bison bone marrow and Opal Valley lamb chops with Korean red chili. 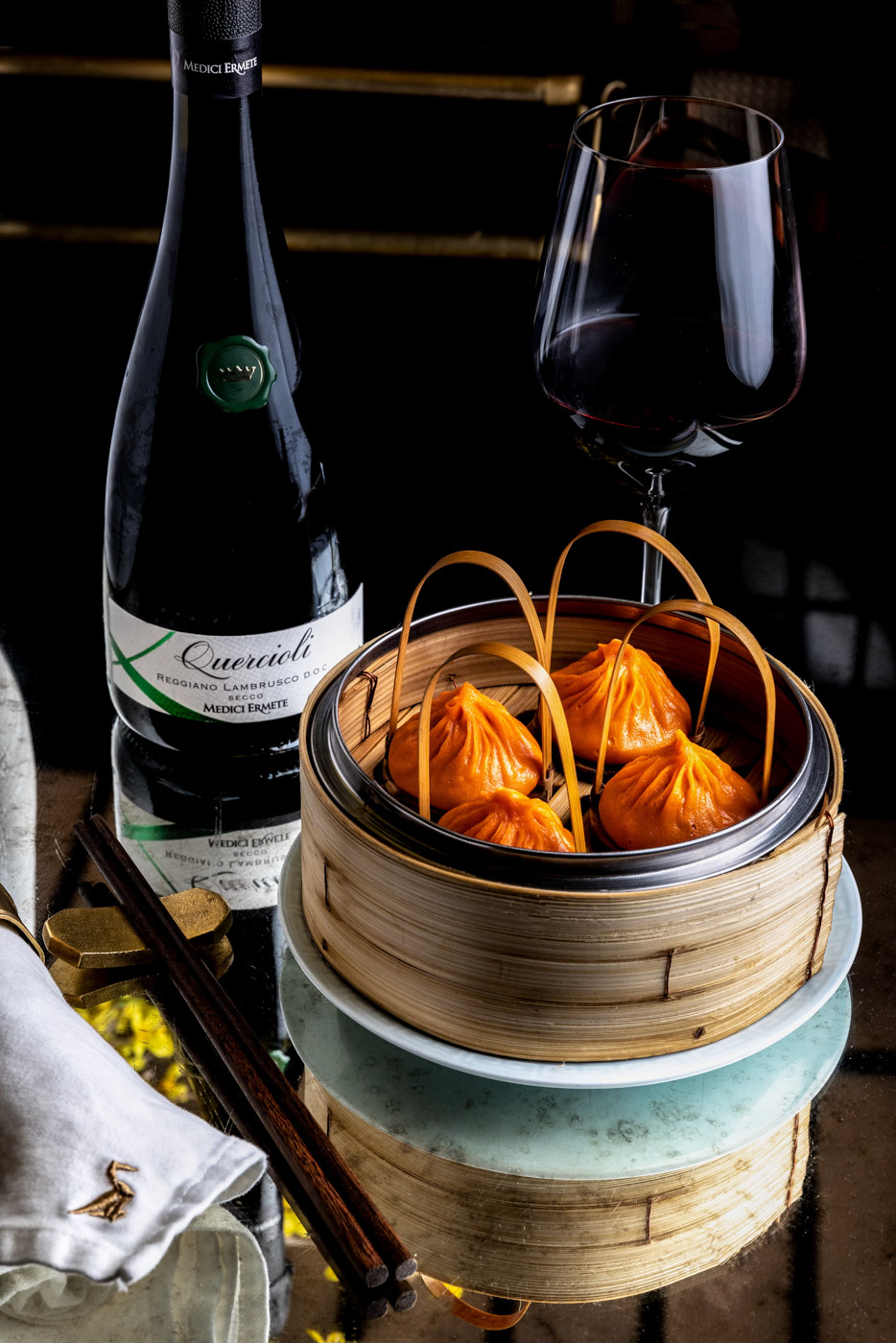 Another melding between East and West can be found at Quan Ju De Beijing Duck House. Server William Wu trained in European wines at Vancouver’s venerable French restaurant Le Crocodile but is equally knowledgeable about high-end Chinese spirits. Diners visit Quan Ju De for baijiu, the premium spirit from distiller Kweichow Moutai, but also for the elegant ways it incorporates the Chinese liquor in mixed drinks.

Though cocktails are relatively new to Chinese restaurants, Quan Ju De integrates them with names that reference cultural figures, periods, and places in China. “Our cocktails embody a lot of tradition and history,” Wu says. A drink that features baijiu, as well as Grand Marnier, Giffard’s Ginger of the Indies, grapefruit juice, and a vegan botanical foamer, is named after Qi Baishi, a famed Chinese painter. Another, French Concession, references an area of Shanghai occupied by France after the Opium Wars.

The premium ingredients in the dishes served at Quan Ju De warrant wines that do justice to their complex flavours, Wu notes. For a dish that combines briny abalone with slow-braised pork belly, he suggests a bold, punchy varietal, such as the Truchard Cabernet Sauvignon 2017 from the Napa Valley. But many of his customers are already knowledgeable, often bringing wines such as Château Margaux Pomerol from their own collections. “They know what they like, they shop for it, and they bring it in,” he says, adding that corkage fees are waived for diners with prepaid VIP membership.

“These sophisticated wine drinkers tell me what flavour profile they like or a wine they really enjoy,” he says. He once served a highly coveted bottle of Château Haut-Brion 2016 to a party celebrating a divorce and a new beginning. The client remembered a wine she had tasted in the past and wanted to recreate its flavour profile. “Some of these clients don’t really look at the price tag,” he says. “They just want the perfect or a special occasion experience.”

Read more from the Spring 2022 issue.