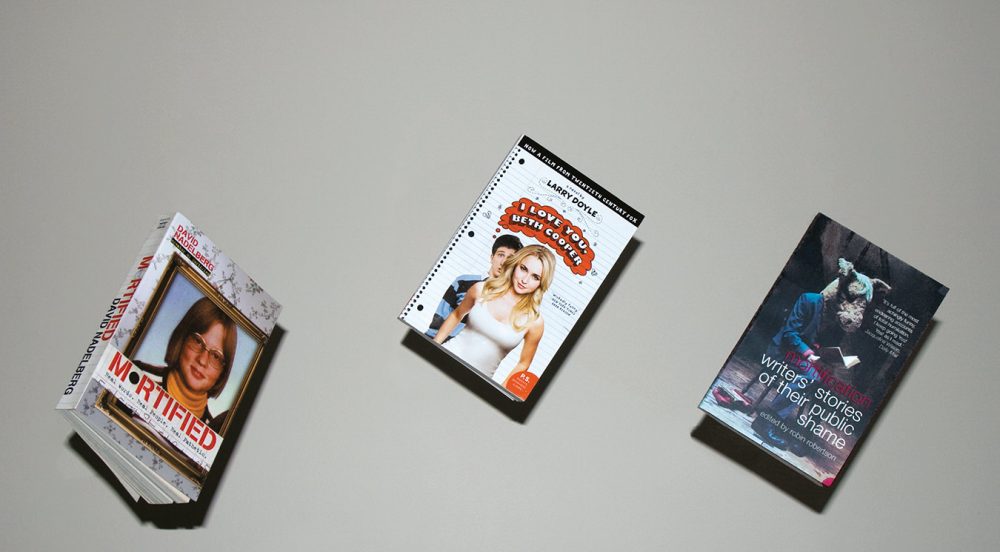 The self-flagellators and the body modifiers may be onto something. In fact, no matter how you feel about piercings or self-denial, most of us can agree that mortification is not without value. Where punishment of the corporeal self is said to free the spirit, public subjugation of the ego may free us all. After all, what is a truly mortifying moment but a painful recognition of our shared humanity?

In addition to piercers and certain humourless religious groups, there are two other groups that test the bounds of mere mortal mortification. No one knows humiliation more intimately than writers and teenagers. Lucky for us, both groups are prone to sharing.

Margaret Atwood kicks things off with an account of her first book signing, during which she sat in the Men’s Sock and Underwear Department in the Hudson’s Bay Company surrounded by piles of her book The Edible Woman. Shoppers avoided her in droves. She then recounts her difficult appearance on an American television show directly following a riveting group from the Colostomy Association. The essay is a reminder that Atwood is not only one of our finest and smartest writers, she’s also one of our funniest.

Simon Armitage writes of the embarrassment that often results when “private thought meets its public response”. He details one particularly harrowing book tour, being driven around by “Mr. Farter”, sleeping on “pube-infested sheets” and finding a copy of his book—inscribed in his own handwriting, “To mum and dad”—in a charity shop. Oh, the glamour of the writing life! The only contributor who seems to miss the point is Chuck Palahniuk, who writes about how overwhelmed he is by his own popularity. Someone has been spending too much time with the body-piercing crowd.

On the adolescent side of things, we have Mortified: Real Words. Real People. Real Pathetic., edited by David Nadelberg. This collection, based on Nadelberg’s stage show, features real-life adolescent confessions donated by their now older, but obviously still mortified, authors. These include love letters, notes passed in class, and old diary entries. My favourite reminiscence is the entry by a young member of the Cotton Judging Team from the Future Farmers of America. A sample: “We competed regionally today, and it’s nothing like I expected. These kids are really serious about cotton, and I’m way out of my league. They come in and are like cotton judging machines.” The pressure of judging cotton proves too much for the dismayed contestant, whose final lines, written about her coach, neatly sum up her reaction: “Fuck him. Fuck cotton.” Ah, the lost hobbies of youth. Nadelberg’s stage show is a legend and the book makes clear why.

Finally, in the realm of fictional mortification, Larry Doyle’s I Love You, Beth Cooper is a tour de force of the genre. Winner of the 2008 Thurber Prize, the book follows Dennis Cooverman on his graduation night. Cooverman professes his love (and a few other home truths) to his classmates during his valedictory speech. What follows would be a horror novel, if it weren’t so funny. “The Coove” is badly beaten numerous times (mortification of the body: check!) by Beth Cooper’s soldier boyfriend. He hosts perhaps the lamest party ever recorded, attended mostly by himself and his best friend (social mortification: check!). Over the course of the night, he is broken down physically and mentally. At the same time, his spirit (and sexual experience checklist) are sent into overdrive as he and his friend Rich race around town with the divine but deadly Beth Cooper and her friends Cammy and Treece (who is described as having “overdone hair that encircled her face like a toilet seat, and plump brown eyes and pillowy lips that brought to mind a cute, cartoon cow. Very cute, but cartoon, and cow.”). The novel is as mortifying as any you will ever read.

If the effects of mortification can be experienced vicariously, these three books will render you as light of spirit as any of the recently flogged or pierced. And you won’t need so much ibuprofen.