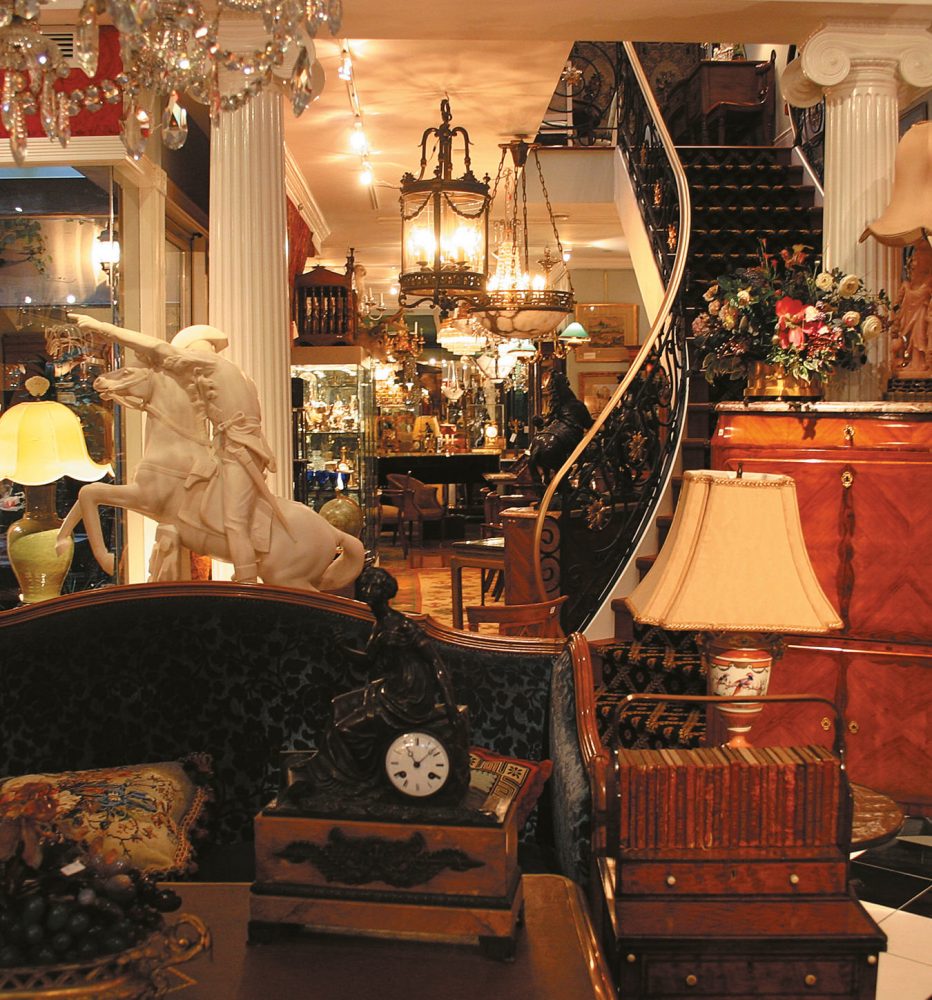 On a quiet Vancouver street, 2nd Avenue between Granville and Burrard, there is a shop unlike any other. True to its name, when you enter the Three Centuries Shop, you are travelling to a different time. One can scarcely describe the treasures inside the building, the top floors of which make up the home of shop owner William MacKinnon. Gold-plated clocks sit on almost every surface. Paintings fill up the walls. Gorgeous wooden tables and desks occupy much of the floor space.

MacKinnon epitomizes the gentleman you’d expect to habituate in such a trove. “This all started as a hobby in the late 1960s,” he says. “While I was at university I’d always be hunting around for a clock, furniture, whatever I could afford.” He speaks quietly about his past in antiquing, his kindly eyes flashing when his gaze falls upon a particular piece, digressing briefly to give the story behind a clock, a chair, a painting. There are an awful lot, here.

In 1987, as a highly respected consultant, he moved to Vancouver from Toronto for work. Six years later, that changed. He transitioned full-time to the antiques game. “At that time I was a customer of a little shop in Gastown,” says MacKinnon. “The owners wanted to retire, so I thought, why not—I’d give it a try. Why did it take so long to get out of consulting and do what I really wanted to do?” he asks, interrupting himself, but doesn’t answer. Instead: “I’ve never looked back.”

In 2003, he decided to move his business. “When I saw this little building, it looked like it had a lot of potential,” he says, looking around at the densly adorned walls. He has since merged his considerable personal collection with the shop’s inventory. “I get lots of interest in things I don’t want to sell,” he says, grinning. “And that’s frustrating for some people. But look, everything is for sale—at the right price.”

MacKinnon’s specialty is in French antiques from the late 18th century to the early 19th century. “I like that period so much,” he says. “It’s a lot of handmade works. These pieces are beautiful things you simply wouldn’t be able to make today without it costing a fortune.” His pieces come primarily from antique dealers in the United States, France, the Netherlands and Canada, and with the occasional piece coming in through private sellers. “Everything’s got a bit of a story,” he says. “I love looking at this stuff. But if it sells, well, too bad.”

Not that that’s a particular worry, as there are countless pieces to gaze upon. There are complicated candelabras, beautiful bronzes, and clocks innumerable, gilded with figures of, for example, Diana the Huntress, and Achilles. We ascend a gently curving staircase to the second floor, where still more pieces await. A beautiful high-ceilinged room contains several chandeliers, sculptures and at least a dozen paintings, not to mention the assorted clocks, tables. We make three circuits of the room, MacKinnon quietly pointing out articles of interest (that is, all of them), where they came from, how old they are. Then through his private quarters and up another staircase to the roof garden. At the far end, an august statue holds court over the garden. (“It’s either Poseiden or Zeus, depending on if you think he’s holding a triton or a spear.”)

It’s up above the streets that I ask, really, the critical question. What’s the secret to a successful antiques business? Much revolves around meeting the right people, says MacKinnon. “A lot of dinners, lots of wine, a lot of walking around.” Which, when you think about it, is actually pretty good advice, for anyone, in any life. “With antiques, you can have something that nobody has, not your friends, not anybody. With their quality and craftsmanship, and the provenance—if you can say that something is from a certain time or place, a certain type of person will get a real kick out of that.” He grins. “Also, I just love the hunt.”

That’s a feeling his customers surely sympathize with. There is certainly a very particular feeling, a genius loci, that makes a shop like Three Centuries so extraordinary. So it is that there is a sign on the outside of the shop by the doorbell that reads, “By chance or appointment.” If passersby are fortunate enough to enter the shop by chance, as it were, they are then fortunate for two reasons: to be granted access; and, to become, for a moment, an audience to a menagerie of incredible artifacts and antiques. By chance, all too lucky.