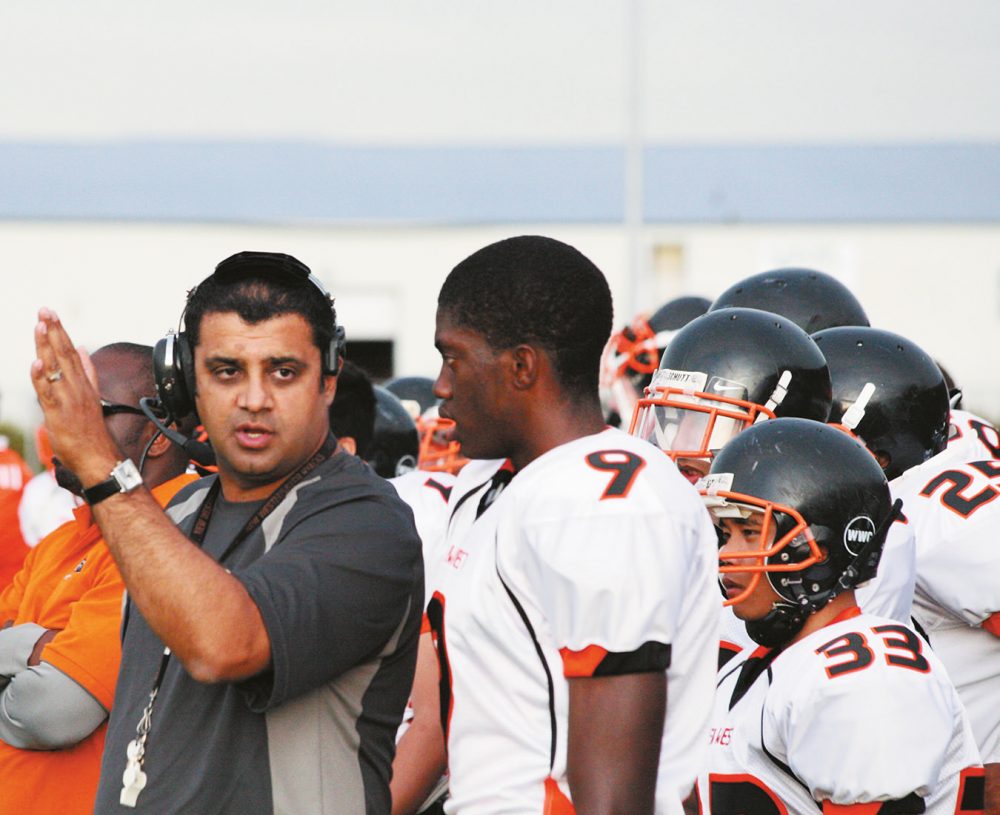 For the past 13 years, you’ve seen him talk the talk on TSN. “I always knew I wanted to work in sports,” says Vancouver correspondent Farhan Lalji. “I played every sport imaginable growing up and even organized most of the games.”

What sets Lalji apart is that he also walks the walk. For more than two decades, he has been coaching high school football in the Lower Mainland, and he is currently the bench boss for the Hyacks at New Westminster Senior Secondary. It is a program near and dear to his heart, as it was Lalji who got the team up and running back in 2003.

“It was daunting, but I knew I could do it the right way,” recalls the Burnaby native, whose personal goals have changed as the Hyacks have evolved into something more meaningful than your average high school football team. To be clear, Lalji is as competitive as any coach in the province. He yearned to win a provincial title when he lined up as a receiver for Burnaby Central, and that desire hasn’t waned since he traded cleats for a clipboard. What has changed, however, is where winning ranks in his hierarchy of ambitions.

“There was a time when winning a championship was the most important thing, but I matured to the point where I realized that winning wasn’t going to define my impact on coaching,” Lalji says. “I take just as much pride in watching a previously troubled kid pass a drug test as I do in winning a football game. This age is where kids need the most impacting, and having a positive influence on our players is what I take the most pride in.”

No player epitomizes this philosophy better than alumnus Jared Read. The former Hyacks lineman is a poster boy for everything Lalji hopes to achieve off the field by getting players on it. In the ninth grade, Read was a homeless drug addict who was on the verge of resorting to crime. Then he found football. Less than four years later, Read was graduating high school as an honour roll student and accepting an opportunity to play university football at Simon Fraser. It is an exceptional story of redemption that demonstrates the transformative power of sport.

“[Lalji] is creating good citizens,” says New Westminster Mayor Wayne Wright, who counts himself among the biggest proponents of the Hyacks. “These young men are representing our city very well, and they develop into adults that are giving back to our community.”

And the community is reciprocating that support in various ways; local businesses and politicians are outward in their encouragement of the team. According to Mayor Wright, the Hyacks’ annual fundraiser has become one of the most well-attended benefits in the city, as locals have been generous in their donations of both time and money. Perhaps surprisingly, Friday night games have become important social events for all age groups. “The stands are packed and we never have any trouble afterwards,” gushes Wright, who is effusive in his praise of the squad, win or lose.

“We have a very unique community,” explains Lalji, who, along with wife Mary and son Lukas, call New Westminster home. “The team has been front page news in the local paper on a number of occasions. [Football] means as much to this community as it does anywhere in the province. I have coaches from more high-profile programs asking to play our kids at our field because of the amazing atmosphere.”

Though Lalji deserves plenty of credit for building the program from the ground up, he is quick to point to a large network of support that has made it all possible. He begins with his coaches, who are as qualified as they are passionate. Their unwavering commitment allows Lalji the luxury of missing the odd practice or game in the rare occurrence when his job at TSN conflicts with the team schedule. Then there’s the administration at New Westminster Secondary, which has been on board with Lalji’s vision from the beginning. But most importantly, he has the support from his wife at home.

“She allows me to put the necessary time in without any guilt,” says the head coach, who has had even less free time at his disposal after spending this season as the president of the B.C. High School Football Association. “She organizes and works the fundraisers. She’s welcomed numerous players into our home. In fact, she was the one who said, ‘New West is where you’ve got to go,’ when I was looking for a place to start a program. She just gets it.”

And so does Lalji. He truly understands the value of amateur sport and the effect it can have on both its participants and a community. For that, this province is a better place.