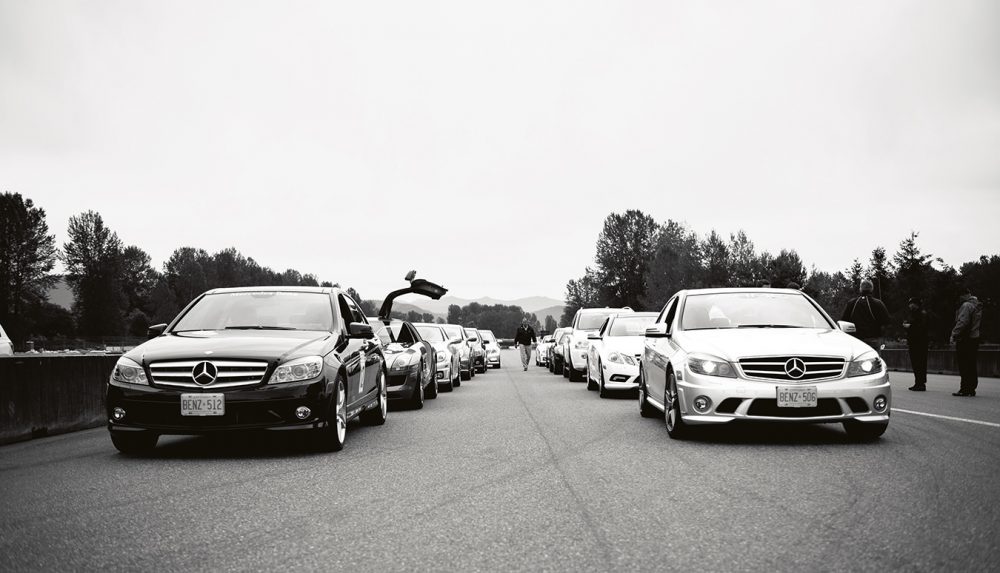 Karl Benz created the first petrol-powered car in 1886. It was called the Benz Patent Motorwagen. Gottlieb Daimler and engineer Wilhelm Maybach’s conversion of a stagecoach with the addition of a petrol engine came later that year. The first Mercedes-Benz brand name vehicles were produced in 1926, following the merger of Benz’s and Daimler’s companies. Today, Mercedes-Benz continues to assert its prowess as an automotive innovator with a distinct emphasis on technology, quality and safety. It explains, at least in part, why you likely have noticed so many of their vehicles on Lower Mainland streets these days.

Jim Rossitter, director of the Vancouver Retail Group for Mercedes-Benz Canada, agrees with the observation that there are more Mercedes on the roads today. “Over the last several years, we have introduced many new products,” he says. “The GLK-Class, the redesigned C-Class, some of the cleanest diesel SUVs and the B-Class. These vehicles have made our brand more accessible and even more appealing to a wider consumer-base.”

The innovations and the production values are not enough, however. Selling the Mercedes brand and the ideals it represents are the stuff of marketing strength. Rossitter goes on to explain that “in Canada, marketing has always been a critical component of our business. When the company was founded in 1955, the brand and the products were virtually unknown. We had no choice but to market ourselves. As the years have progressed, we have slowly established our roots in the Canadian marketplace.” He pauses, before adding that British Columbia is unique among the various Canadian markets: “In addition to many second and third generation Canadians who have lived here for decades, Vancouver enjoys a large population of new Canadians who are very enthusiastic, trusting, and committed to the brand.”

Still, the automotive market promises to become increasingly competitive over the coming years. For Mercedes-Benz that means augmenting their current product line with additional vehicles that reflect the heightened environmental awareness of West Coast consumers. BlueTEC is a clean diesel burning technology that is coming aboard many of their vehicles. It controls emissions by driving exhaust gases through filters to the catalytic converter, where they mix with a new water-based additive called AdBlue. Thus, polluting nitrogen oxides are converted into nitrogen and water. The result is a significant reduction in soot and pollutants, making the BlueTEC engine one of the most efficient, environmentally-friendly diesel engines on the planet, without compromising performance.

In the sex appeal department, nothing is lacking. One advantage of owning a Mercedes-Benz in Vancouver is the length of time drivers can enjoy the top down on their four-season convertibles. But even on rainy days, customers will soon be able to benefit from a new sun-roof technology coming on stream. Mercedes-Benz is enhancing the vario-roof of the SLK: at the touch of a button it can be made either transparent or darkened. In transparent mode it will offer an open-air experience during cold weather, while in darkened mode it will afford a haven of shade and prevent the interior from heating up in direct sunlight. The totally unique glass roof will be celebrating its world premiere in the new SLK next year.

Safety innovations abound as well. Pioneering developments from Mercedes-Benz have included ABS, ESP and now Lane Keeping Assist, a system that detects the lane markings in front of the vehicle by evaluating the difference in contrast between the road surface and the lane markings. The system can reliably ascertain whether the car is leaving its lane intentionally or not. Only then does Lane Keeping Assist intervene by causing the car’s steering wheel to vibrate, making the driver aware of the situation. Therefore, there is no warning if the driver, for example, accelerates before overtaking or joining a motorway, brakes heavily or enters a bend.

With all this progress and innovation, it may seem like a long way from 1886. But, in some ways, it is business as usual.