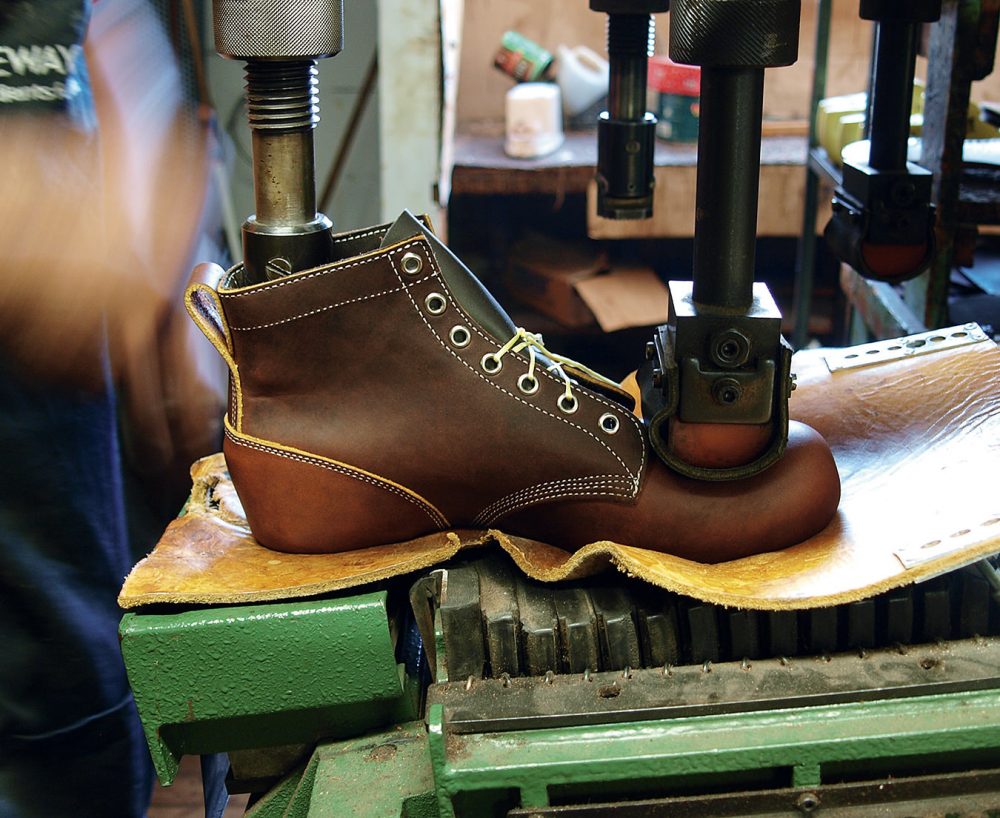 The sign on the door that separates the Dayton Boots retail space on East Hastings from the workshop in the back reads “Danger: High Noise Area”. But at 7 a.m., the only sound coming from the factory is Norman Bayabay’s tenor, which lofts over the old-fashioned machinery and rows of darkly gleaming Rebel boots lined up on rolling racks behind his workstation. The lone cobbler sings the Drifters’ 1964 hit “Under the Boardwalk” as he lifts his hammer and pounds seven nails into the heel of an upturned boot, a Bourbon Confederate style.

He’s soon at the end of the 200-plus steps that go into making each pair of Daytons. Cordwainery may be becoming an endangered art, but Bayabay is one of a few who still possess the skill and dexterity to work an initial piece of cut leather through the intensive process of hand-lasting, tacking, welting and so much more, before ending with a boot. “Designers love to draw, but you have to consider every step of the assembly when you want to make a shoe into a reality,” says Bayabay. “You must master the materials, the workmanship and the machines.”

Bayabay spotted his chance to gain a cobbler’s ability in a newspaper advertisement while living in Manila, Philippines, in 1986. He applied for training and won a coveted two-year apprenticeship with a group of European cobblers. “The Belgians taught us about the grain and chemistry of leather. The English taught us pattern making. The Dutch taught us about construction.” He emerged with skills in traditional craftsmanship as well as in operating modern industrial shoe-making equipment. But, as Bayabay discovered, most shoe-making jobs today no longer require the time-honoured aspect of the trade. It wasn’t until he moved to Vancouver in 2006 that he had the chance to make shoes by hand, when he was hired by the Dayton Boots factory.

The Dayton Boots narrative began in the 1940s with Charlie Wohlford, who managed the Lumberman’s Social Club at 64 East Hastings. Wohlford tended bar, but the loggers knew of his other talent: cordwainery. In response to the numerous requests for boot repairs, Wohlford founded Dayton in 1946. The first boots he made were called Dayton 64s. Hand-nailed, sturdy and comfortable, they quickly became the footwear of choice for loggers, construction workers and longshoremen, as well as firemen and policemen.

Dayton Boots earned a name for their durability, which appealed to workmen across the trades. As Dayton expanded its line in the 1960s to include recreational styles, like the iconic Black Beauty motorcycle boot, Wohlford upped the aesthetic ante while continuing to prioritize quality construction.

An example of this was the introduction of Goodyear welting. Invented in 1869, it is an indicator of boot pedigree, which you can spot by flipping a shoe over and checking to see if the stitching goes all the way through the sole of the boot. “Wear a welted shoe for a decade, then bring it back here and we can remove the entire sole and replace it,” Bayabay says. “We’ve got one pair in for repairs that is 21 years old. You can’t do that with shoes that are cemented with adhesives.”

But what does it matter if the boot’s sole is immortal, if the upper isn’t crafted of the same quality and care? At Dayton, the leather is assessed for consistency of grain and imperfections before the boot patterns are stamped from the dense, full-grain, oil-tanned hide. After the patterns are cut, the edges of the leather components are whittled down so that they join seamlessly—a procedure called skiving. Next comes lasting, which is accomplished with a little elbow grease and a pair of cobbler’s pliers. The leather must be heavy, so that when Bayabay stretches it over the last (a foot-shaped mould), it won’t pucker or split. When he triumphs, he tacks down the leather upper, and then secures it again by sewing through the welt strip, the upper and the insole of each boot. The remaining layers are attached—the leather midsole components, an insole, a Dutchman heel, a steel shank support across the boot’s arch and a fat nitrile outsole. It is starting to look like a boot, but it won’t be a true Dayton until it undergoes the welting process.

Bayabay starts up an antiquated, mint-green sewing machine. As the motor whirs and punches its waxed-linen thread through the half-inch outsole edge, Bayabay chimes in to sing “My Girl” above its hum.