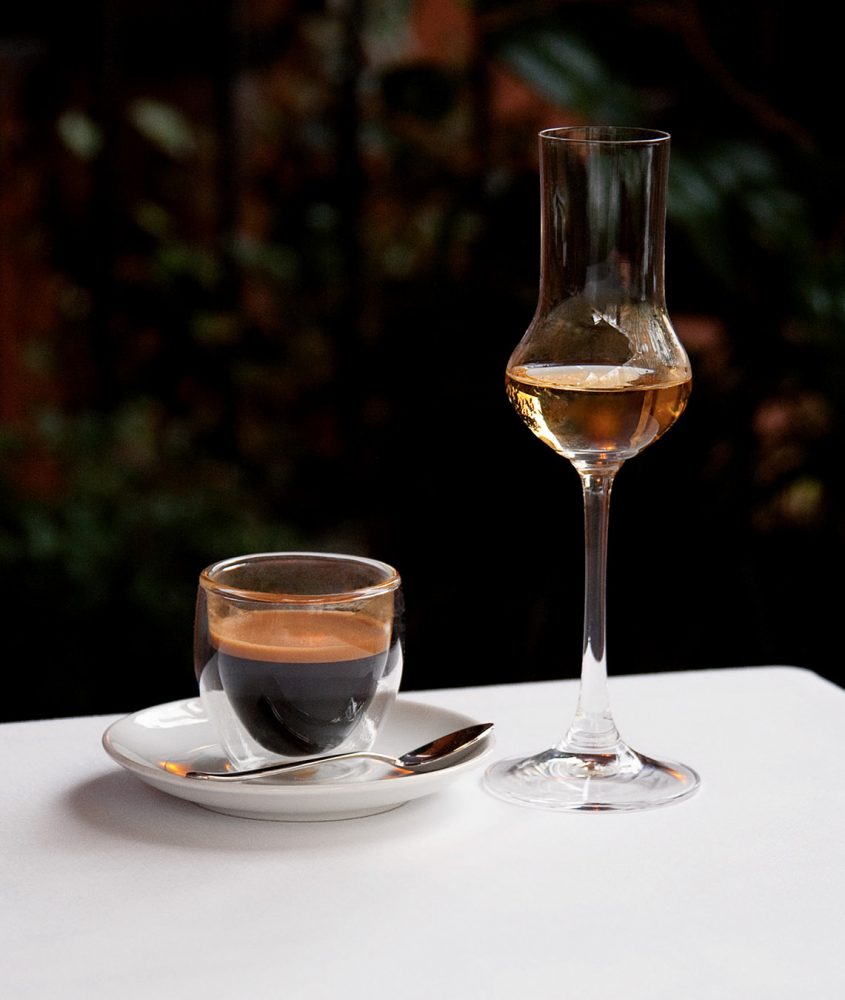 Outside, it’s cold and the rain drums on the patio like timpani. It’s a good night to be indoors. Dinner service at CinCin is winding down, but the scent of the forno lingers. I begin the ritual of slowly closing my bar as good wishes and farewells echo into the night.

Up the staircase, swimming against the flow of departing guests, comes an attractive young couple, sopping wet. They doff their coats, pull out stools and seat themselves next to our grappa mountain. “So what’s that?” the gentleman asks.

“It’s grappa,” I say. So far I’ve collected about 80 brands, but I’m headed for 100. “It’s kind of like the weather tonight—pussycats and pit bulls. But a great cure for the rain, too.”

Let me admit to this: grappa has a reputation as mixed as Berlusconi’s. It can fix you up or it can let you down with a thud. It wasn’t much of a drink until the 1960s, when a woman named Giannola Nonino refined the process and began aging the product. Now it’s iconic and a little cultish—the name is even protected by the European Union.

Grappa has an acquired taste and I’d advise anyone to start with something cask conditioned and aromatic. I pour the couple two bulbs of Il Palazzone. It’s mellow but lively and fresh. And with that, I have a little soliloquy to accompany my grappa service. A little history, a few examples, an anecdote or two.

Grappa is a digestivo designed to help you refocus and reflect after dinner. It is the ultimate regifting; it’s brandy, but made with the leftover wine skins, pulp and stems, called pomace. It started as a thrifty way for the farmers to get through the cold winter months; it warms you up. The classic way to take it is in a caffè corretto, “corrected coffee”—a shot of young grappa in your espresso.

Some say grappa originates from the Veneto region, others say Salerno, but it derives its name from the town of Bassano Del Grappa, where Nardini Distillery (Italy’s oldest distillery) has been producing grappa since 1779. Ms. Nonino’s family also has a long history of grappa-making at Nonino Distillery in Percoto, dating back to 1897. But to be called grappa, it must be made with the pomace from Italian grapes and in Italy, or in San Marino or the Italian area of Switzerland. Everything else is schnapps, or slivovitz, or aviation fuel. And the rules say that they can’t add water, so they use steam in the distillation process.

I place bowls of lemon sorbeto in front of the couple as well as shavings of parmigiano-reggiano. “These will refresh your palate a little between sips,” I tell them. It’s up to the grappa maker to grab the heart of the distillate, so that it can then grab yours.