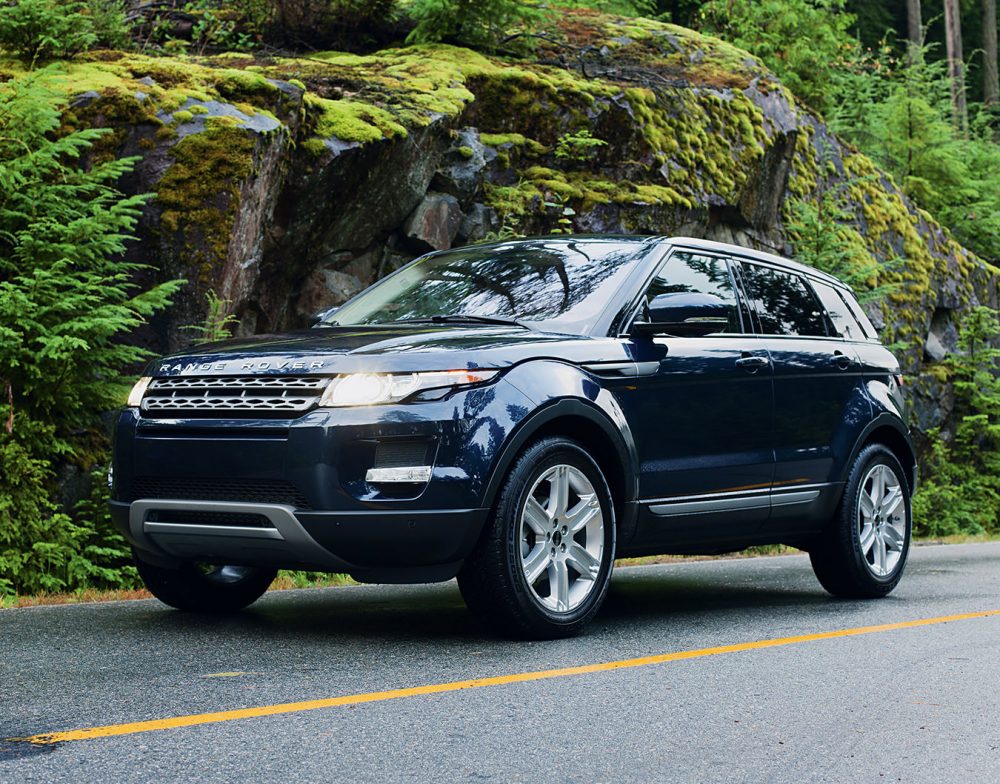 It’s a cringe-inducing moment as the front wheels of the brand-new Range Rover Evoque drop off the barge ramp and into the cold Pacific Ocean. Salt water and luxury cars were never intended to be this intimate. But this isn’t just any luxury car—it’s a Range Rover, and it’s perched on the edge of the barge to prove that despite being the smallest, most fuel-efficient and most car-like Range Rover yet, it still has the marque’s go-anywhere DNA.

Trusting the Land Rover team who organized this unorthodox introduction, I ease off the brakes and allow the rest of the car to follow the front wheels into the foot-deep Burrard Inlet saltchuck. Despite its low, wedge-like profile, the Range Rover has an impressive 21 centimetres of ground clearance and a semi-amphibious 50-centimetre wading capability, so a bit of water presents little obstacle, and as you ease onto the throttle, the Evoque easily wades through the brine and up the historic Burrard Dry Dock slipway.

It’s an unexpected start to Evoque’s North American press launch, but then the Evoque is an unexpected vehicle. The design debuted as the Land Rover LRX Concept at the 2008 North American International Auto Show and, unlike most concept cars, made it into production with its good looks intact. It’s a real game-changer for Range Rover, a car focused foremost on design and city capability. “The Evoque should appeal to customers who are not interested in the Land Rover or the bigger Range Rovers,” says Andrew Polsinelli, general manager of product planning for Land Rover North America. “It’s for customers who want something smaller, more efficient and easier to park.”

Beyond the slipway lies fallow industrial land that makes a fine off-road proving ground, and Range Rover’s engineers are keen to demonstrate the Evoque’s abilities. After being guided up what seems an impossibly steep ascent to the top of a dirt-and-gravel hummock, a Land Rover team member shows us how to use the Evoque’s hill-descent control, and sets us off down the hummock’s even-steeper back side with instructions to not touch the brakes or the gas, but to “just let the car do the work”. It’s another leap of faith, but the Evoque makes an easy controlled descent amid a racket of sliding gravel, while you concentrate on steering. Then it’s time to hit the tarmac, where the Evoque is really in its element. Driving past North Vancouver’s Lonsdale Quay, the Evoque’s dynamic styling attracts plenty of attention, and pedestrians swivel around for a second look. A quick stop for coffee reveals two points of interest: first, when you shut down the engine, the gearshift selector knob glides down to sit flush with the console, rising back up again when you restart the car. Second, there’s only one pair of cupholders in the centre console, and none in the back. Still, the surprisingly roomy back seat is a good place to be thanks to the Evoque’s panoramic glass roof option.

On the highway, the Evoque’s low centre of gravity and comparatively svelte 1,770-kilogram curb weight allow precise, agile handling and brisk performance from the turbocharged 2.0-litre, 240-horsepower four-cylinder engine and six-speed automatic transmission. Acceleration from standstill to 100 kilometres an hour takes just over seven seconds, and the Sea-to-Sky Highway’s undulating corners become delightful playthings. Ensuring the right measure of comfort and control are MagneRide shocks that adjust 1,000 times a second to adapt to changing conditions.

The spectacularly scenic drive to Whistler provides ample time to phone a few friends (naturally the Evoque has Bluetooth connectivity for hands-free calling) and check out the stunning Meridian audio system. Meridian builds some of the world’s most exclusive and highly regarded home audio equipment, and the system in the Evoque is a treat for the ears, offering exceptional clarity and dynamic range.

Range Rover offers the Evoque as a five-door hatchback or a three-door coupe, and a quick stop in Squamish offers the chance to try both flavours before—wait for it—driving up Blackcomb Mountain. Whether or not this is something the average buyer would do with a car that, fully optioned, can cost over $70,000, is a good question, but the Evoque’s Terrain Response system and all-wheel drive certainly give it the capability. The car scrambles up rocky fire roads and short sections of steep ski runs with ease, to arrive in comfort at the Rendezvous Lodge near the mountaintop.

It’s a perfect demonstration of what is perhaps the quintessential Vancouver vehicle: stylish and capable, equally at home on the streets of Yaletown or the slopes of Blackcomb. “Vancouver is very much the kind of place the Evoque was designed for,” points out Lindsay Duffield, president of Jaguar Land Rover Canada. The only question remaining is whether you want the five-door or the coupe.