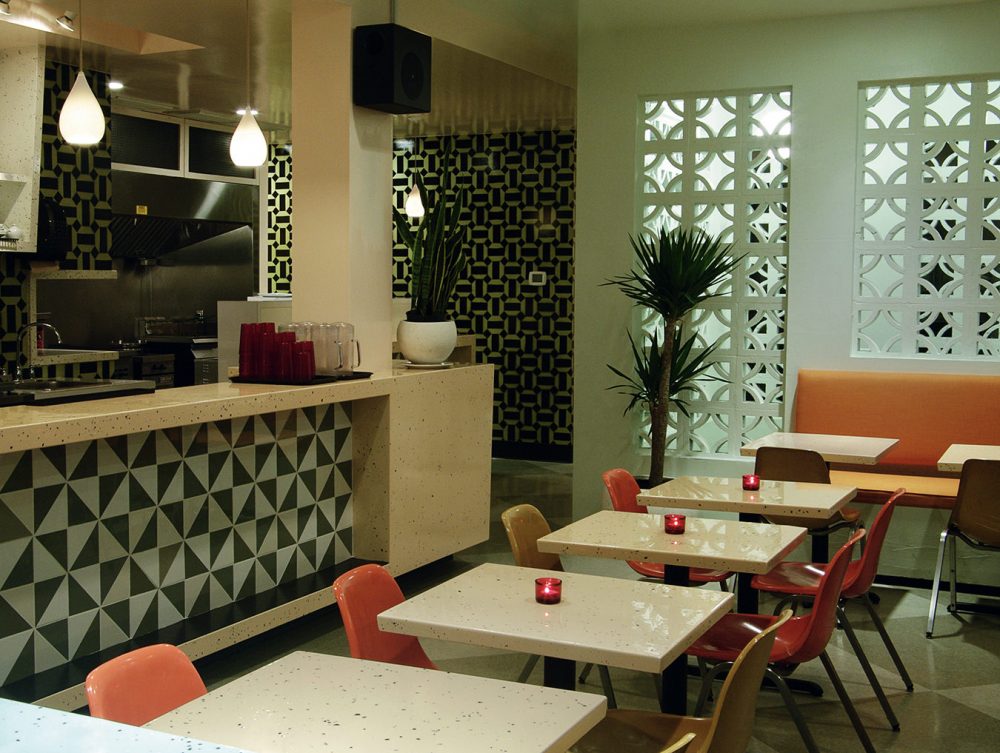 Successful restaurants present diners with the holy trinity: fine fare, good service, and ambiance. As architect Scott Cohen knows, if you neglect ambience, you risk the entire sensory experience. In this era of food hyperawareness, when the source and preparation of what you eat represents an identity, the context in which you eat has never been more meaningful. Restaurant atmosphere has evolved beyond the dichotomy of fine versus casual dining to reflect a more nuanced version of what restaurants are and what they serve. How we consume is itself a design aesthetic.

Cohen is the man behind Nuba, the accomplished Lebanese chainlet; the Waldorf complex; Maenam; Che Baba; and Les Faux Bourgeois Bistro, affectionately known as Les FauxBo. And this is to name but a few of his projects. His most recent design coup is the Acorn, an ultra-modern, epicurean vegetarian restaurant at 24th and Main Street. To Cohen, each of these restaurants is a story. Inside each story, the design elements he chooses, from form to material and colour, build what he thinks of as a dialogue of associations.

How does Cohen come up with the narrative? A self-described critical modernist, he employs conceptual strategies, relying on menu and site heritage to shape a restaurant’s look and feel. “Modernism has a tendency to sanitize. The cultural indicators or ‘baggage’ are what give form to each project, for me,” explains Cohen. “The way in which I interpret the site and the concept of the project, food, or otherwise, refers back to early postmodernist ideas which encourage a porous relationship between architecture and the world it is part of.” Of primary importance to this relationship is the food. In the case of the Acorn, Cohen faced a novel cuisine challenge: the Acorn is Vancouver’s first gourmet, veg-only affair. Cohen began by sitting down with owners Brian Skinner (chef) and Shira Blustein (manager). Discussing the vegetarian movement, it was evident that Skinner and Blustein wanted to underplay the hippie association that clings to meat-free cuisine. The Acorn’s ambience had to portray the value of walking lightly on the earth, yet in a sophisticated urban iteration.

Integrating identity and design is a delicate, almost psychoanalytic process. “My job is to try and understand the forces at play and to use them to create a unique environment representative of those forces,” says Cohen. Skinner and Blustein also wanted to show who they were: two young, accomplished musicians who wanted a space where friends could enjoy good food and wine. Finally, Cohen’s plan needed to absorb site considerations: the early 20th-century building and the salvageable components from the space’s past as a Greek taverna and, most recently, Cipriano’s restaurant.

Cohen kept and polished the restaurant’s original parquet floors as a foundational link to the past; he reupholstered Cipriano’s black and chrome Legion chairs with a provocative light-green vinyl, referencing history while nodding to the owners’ rock ’n’ roll sensibility. The architect transformed the Acorn’s interior by panelling the walls with lovingly finished yet construction-grade fir plywood, stained dark. The mean material was enriched by investing handcraftsmanship, suggesting the care chef Skinner invests in enhancing humble vegetables. The panels’ dark stain, in turn, conjures the shadowy space of a forest at night. To the untrained eye, the Acorn is an attractive and edgy gathering place. Under an artist’s gaze, it reveals layers of meaning. Knots in the plywood panels resemble the venue’s namesake. The angles of the panels, custom-cut mirrors, and mod metal and jute-string lamps break the rectilinear hold, providing another subtle metaphor for the forest. Yet the most slender impression of hippiedom is there in the vegetation; emerald-green philodendron trails nostalgically form wall-mounted planters.

You likely couldn’t fathom an artist after viewing one painting, or an author after reading a single tome. “If you see one of my pieces, you can appreciate it,” says Cohen. “You can’t appreciate the ideas behind it fully, however, until you see a series.” His versatility is most evident in his multiple-volume works for the Nuba chainlet—Vancouver’s undeniably in-demand set of Lebanese restaurants.

When owners Victor Bouzide and Ernesto Gomez approached Cohen in 2008, Nuba was a tiny joint on West Hastings. Nuba had energetically reinvented Lebanese fare, and couldn’t keep up with the patronage that queued out front, rain or shine. So Bouzide found Nuba a new home: a 100-seat abandoned restaurant in the basement of Vancouver’s Dominion Building—the tallest building in the British Empire when it was built in 1910. “The space was a diner back when Victory Square was the bustling downtown centre,” says Cohen. “As we peeled back the layers in that derelict, semi-demolished room, we found traces of the original restaurant—an amazing 1940s skeleton with salvageable woodwork and plaster elements.” The Nuba owners were up for a progressive interpretation. Cohen responded by fusing the site’s 1940s time signature with the cultural indicators that accompany Lebanese cuisine. These considerations mingled: Nuba at 207 West Hastings became a dimly lit romantic hot spot of the 1940s, back when Beirut was the Paris of the Middle East.

Cohen carried the same pattern of interlacing site heritage and Lebanese culture when designing Café Nuba at 146 East 3rd Avenue in 2010, and the most recent Nuba at 3116 West Broadway, in 2012, with refreshingly varying outcomes. Nuba East 3rd is in a late 1960s / early 1970s building, and features slightly more casual Lebanese fare, so the theme is a roadside café on the outskirts of Beirut with striking, retro-pop pastel chairs. Meanwhile Nuba Broadway is a smooth amalgam of 1970s Vancouver architecture and an old-world Lebanese village, referring back to Kitsilano’s long tradition of Mediterranean tavernas.

A careful eye might spot other recurring motifs, beyond loose repetition of the underlying theme. In all three locations, Cohen creatively repurposed six-inch green and white bathroom tiles, cutting them diagonally and crafting mosaics that appear on the walls at Hastings, under the counter at East 3rd, and across the monolithic bar at the West Broadway Nuba. The triangles shift in formation from mountains to quasi-Arabic characters to Lebanon’s native cedar tree. You’ll also notice a lacy, white, concrete block screen—a West Coast–Middle Eastern hybrid—at Nuba East 3rd and Nuba West Broadway that evokes the traditional Islamic mashrabiya. “Design needn’t be simply a commodity,” says Cohen. “It has the potential to inform and be informed by our lives in a profound and meaningful way.” And the food tastes better, too.