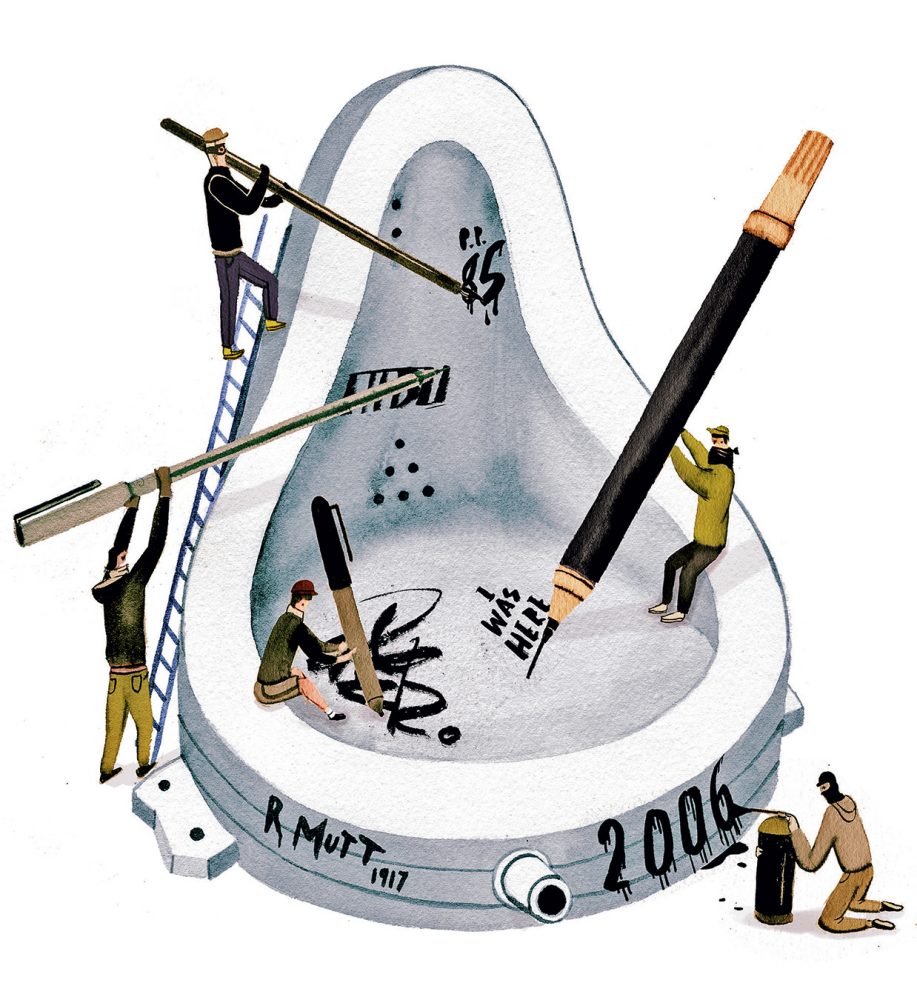 With a furtive sweep of black ink applied in mere seconds, a multi-million dollar Mark Rothko painting went from pristine presentation at the Tate Modern to damaged and likely devalued thanks to the handiwork of Vladimir Umanets. This past October, the co-founder of the self-proclaimed Yellowism movement scrawled his promotional message—“a potential piece of Yellowism”—on the bottom-right corner of Black on Maroon (1958) in full view of the public. Arrested and since charged, he denied it was an act of vandalism but rather a platform from which to launch his peculiar ideas.

There is no shortage of art vandalism examples from which to draw. From the Germanic Vandals’ looting of Rome and defacement of its cultural treasures in AD 445 (from whence the term vandal was conceived), to the repeated attacks suffered by the Mona Lisa since 1956, and on to Rindy Sam’s self-declared “act of love”, expressed by way of a heavily shellacked kiss on Cy Twombly’s bleach-white Phaedrus triptych in 2007, the methods by which people alter artworks is as varied as the reasons that compel them.

In the case of Umanets, his motivation was clearly to garner personal attention, but other reasons are less “rational”. Take the serial vandal Hans-Joachim Bohlmann. Over the course of three decades, he attacked over 50 paintings in Europe, often with sulphuric acid, causing about $180-million in damages. Suffering from a diagnosed personality disorder and having tried numerous forms of medication, he spent time on and off in psychiatric facilities. His victims included works by Rubens, Paul Klee, and Rembrandt.

For Jubal Brown, then an art student in Toronto in the 1990s, his two acts of defacement were born from disdain for the artworks, but were also part of a self-described performance piece he entitled Responding to Art. In 1996, during a visit to the Art Gallery of Ontario, Brown spontaneously vomited red gelatin and cake icing on Raoul Dufy’s Harbour at Le Havre (1906). Later that same year, he did it again on Piet Mondrian’s Composition In Red, White, and Blue (1933) at MoMA in New York—this time in shades of blue Jell-O and cake icing. Initially claiming the incidents to be accidental, he later admitted it was a response to artwork that he found “oppressively trite and painfully banal.” He had planned a third “performance” in yellow, but did not complete the act. No actions were taken against him.

Political protest was the thrust behind the actions of Tony Shafrazi, now a New York gallerist. In 1974, he spray-painted Picasso’s Guernica (1937) in MoMA with the phrase “KILL LIES ALL”, understood to be a reaction to the announcement the previous day that a key figure involved in Vietnam’s My Lai massacre had been released on bail. However, in 1980, he said in a magazine interview that he “wanted to bring the art absolutely up to date, to retrieve it from art history and give it life.” He was charged with criminal mischief and Guernica was successfully cleaned.

Perhaps one of the most famous cases of vandalism is considered by some not to be an act of vandalism at all. Marcel Duchamp’s porcelain urinal titled Fountain (1917) has been the subject of numerous art performance encounters. In 1993, it was urinated upon by a performance artist who later, in 2006, smashed it with a hammer, causing a chip—an act of performance art the artist said Duchamp would have appreciated himself. This urination “performance” was also attempted in 2000 by two others, unsuccessfully. Most recently, in a case of vandalism of another spirit altogether, a well-meaning parishioner tried to “restore” an Ecce Homo fresco in a Spanish church, to calamitous results.

Encounters like the above place themselves squarely in that nebulous space between vandalism and intervention. Some of the individuals involved in these scenarios have positioned themselves not as vandals but as participants in the life of the artwork, as an intervening force acting to enhance, revive, or embellish upon the artwork’s message and relevance in today’s world. Perhaps this distinction between intervention and desecration hinges on whether the original creator is a willing party to the encounter or not; in the case of Rothko’s canvas, we’ll never know if he would have sanctioned his majestic Black on Maroon as a “potential piece of Yellowism.” Likely not.