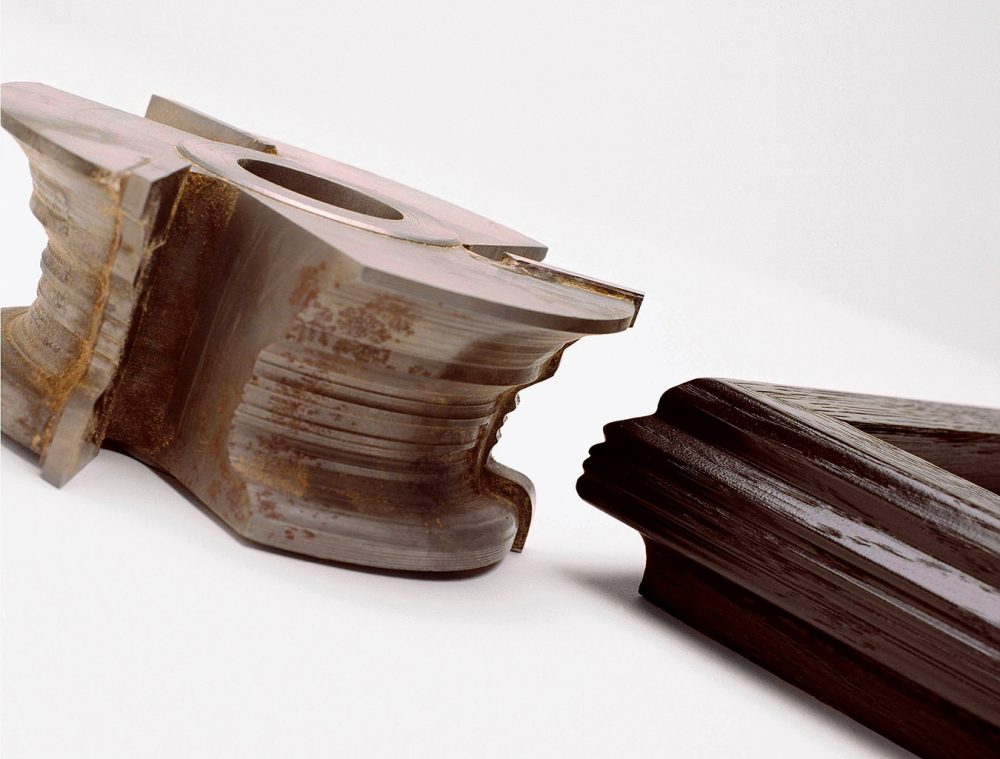 A frame created by Francis Lemieux for artist Neil Wedman.

In 2008, the Marian Goodman Gallery in New York exhibited some of Jeff Wall’s more recent large-scale black-and-white photographs. Heralded as a remarkable chapter in his artistic production, these vast photos were enthusiastically received. While the focus for most who saw this exhibition was the photos themselves, few might have considered the process behind their production, and even fewer would look on the frames and wonder about their maker. So that these photographs might be seen in the most effective and complementary way, these frames needed to be at once visible and invisible to the viewer.

These frames, like the supports and mounting systems of so many works of art, were not made by the artist, Wall, or even a member of his studio, but rather in close consultation with a craftsman, Francis Lemieux, who specializes in wood joinery. Lemieux, a long-time resident of Greater Vancouver, works as a custom joiner and furniture maker, and has collaborated with a number of Vancouver artists, including Ken Lum and Rodney Graham. His work for these artists has often involved making frames, presentation boxes for limited edition sets, and even studio furniture. He is rarely credited for such work on a museum label, but is an integral contribution to the artistic process. He is one of a few Vancouver-based craftsmen who specialize in this sort of artistic collaboration, owing, in part, to his ability to translate an artistic idea into reality.

Lemieux was born and raised in Ancaster, Ontario. He grew up surrounded by woodworkers and craftsmen, learning the basics from his grandfather, a union carpenter, who later became a well-respected builder of custom homes. “My grandfather gave me a bucket of rusty crooked nails he had salvaged from demolished structures and showed me how to straighten them with a wooden block and a claw hammer,” Lemieux says. “He also gave me a pocket knife for whittling, and a little later a small block plane. I would spend hours making curled shavings of various widths by paring the hard edges of pine boards into soft rounded curves.”

Lemieux actually started his joinery career in Vancouver, where he worked for one summer as a carpenter before returning to Dundas, Ontario, and working on his own designs. He also spent some time in Vermont studying guitar making, and for a few years built classical guitars in addition to furniture. Finally, in 1979, feeling that he had exhausted the opportunities available to him in Dundas, he travelled west, to B.C.

Lemieux transitioned back into furniture making and joinery shortly thereafter, and did a bit of architectural woodwork and millwork as well. He shared a space with a group of other woodworkers in North Vancouver, where he based his business for 18 years. In 2002, he moved his shop to Port Moody, where he could expand into the space necessary to house his heavy machinery. Most of his work, even now, consists of custom joinery; however, he is also a talented furniture designer and maker.

In 1985, Lemieux began to collaborate with a number of Vancouver artists. Spending many evenings at La Bodega, the long-standing tapas bar on Howe Street, he met Rodney Graham and a number of the other Vancouver School artists. Over pints of draft beer, patatas bravas, and empanadillas, they hashed out artistic plans, many of which came to fruition. What began as sketches on napkins became fine wooden shelves on gallery walls, and large-scale studio equipment.

The nature of his work with artists varies, but in each case, Lemieux works closely with them to execute their plans. “Designing and making things has always come naturally to me. It is especially gratifying to use my skills to help artists realize their work,” he says. For Neil Wedman, Lemieux created a frame with the same profile as that of the face featured in a drawing. His contribution in this case exemplifies Lemieux’s goal for many of these projects: to literally and figuratively frame the work of art in the best way possible, sympathetically creating a three-dimensional extension of the artistic idea. While viewers at the Marian Goodman may not know his name, Jeff Wall and others do, and greatly value that fact.