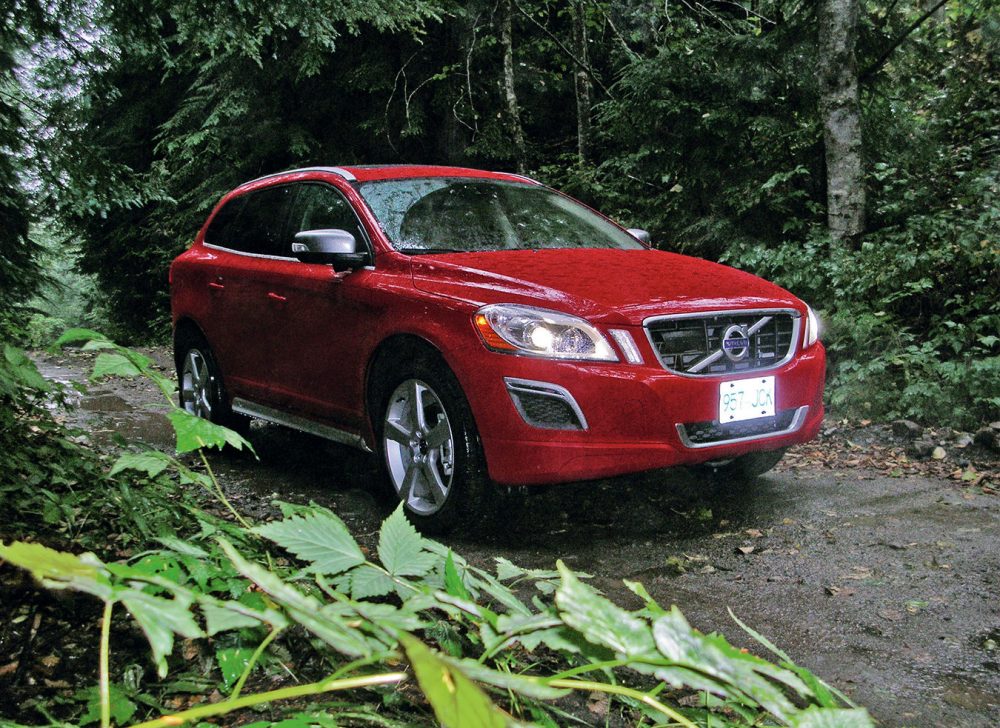 Easing smoothly out of a tight switchback corner and accelerating with an effortless rush up a particularly steep, rain-slicked section of the Cypress Bowl access road, one can’t help but think that this is exactly the sort of mountain highway Volvo’s designers had in mind when they created the XC60 T6 R-Design.

The destination for the day is the Yew Lake Trail, an easy and picturesque walk in the park. But thanks to the XC60’s highway prowess, the drive up the mountain is itself a walk in the park, despite the wet leaves and loose gravel littering the route. With its turbocharged 3.0-litre inline six-cylinder engine churning out 325 horsepower and 354 lb-ft of torque, the XC60 T6 R-Design can launch from a standstill to 100 km/h in just over six seconds, while big, sticky 18-inch tires work with the electronically controlled all-wheel drive system with Instant Traction to provide a confidence-inspiring grip. You can relax and enjoy the splendid mountain scenery and the magnificent views from the various lookouts.

If you’ve never visited Cypress in the off-season, the Yew Lake Trail is a revelation, a window into a mountain you never knew existed, a tranquil place shrouded in mist on this afternoon, resplendent in early fall colours. There are picnic tables dotting the groomed gravel trail overlooking tiny Yew Lake—a perfect spot to sit and enjoy a bite of lunch.

Later in the day, the agenda calls for a drive along a rutted, rocky, mud-slicked trail to a wilderness cabin, and here again the XC60 is entirely in its element. The Haldex all-wheel drive system, if anything, overperforms, so despite some stomach-dropping ascents and descents along the trail, the XC60 never loses its grip nor misses a beat.

Of course, life isn’t all mountain getaways, but with its spacious crossover layout, the stylish XC60 is an equally accommodating partner for the daily city slog. Take it for a run to the local mini-storage facility and you’ll be impressed by the 40/20/40 split folding rear seat that allows a variety of cargo configurations. It folds perfectly flat to allow box after box after box of household goods to be slid effortlessly into the spacious luggage area.

Thanks to its nicely weighted speed-sensitive steering and built-in stability control system, the XC60 T6 R-Design is as happy negotiating city streets as it is tearing along the highway, and even when traffic is obnoxious the ride remains enjoyable, thanks to the comfortable two-tone leather front sport seats and the roomy back seat, which is one of the most spacious in the segment. Program your destination into the GPS navigation system, then select some suitable music on the clear, rich-sounding 650-watt 12-speaker premium audio system, and the city bustle fades to a suitably muted background murmur.

Helping foster a relaxed driving environment are the XC60’s outstanding crash ratings and extensive list of advanced safety gear and driving aids. Volvo has long been a leader in this regard, and the XC60 represents a culmination of the company’s expertise, earning perfect five-star scores in National Highway Traffic Safety Administration crash tests and “Top Safety Pick” recognition from the Insurance Institute for Highway Safety.

The list of safety gear in the Volvo XC60 is nearly as long as a typical family grocery list, and includes not only staples such as anti-lock brakes, dynamic stability control, and an extensive array of airbags, but also a camera- and radar-based City Safety system that works at speeds up to 50 km/h to precharge the brakes if a slower-moving vehicle is sensed immediately ahead, automatically applying full braking power if the driver fails to respond and a collision is imminent. In addition, there’s an optional $800 blind-spot information system to warn of cars in adjoining lanes; and an available $2,100 driver support package goes even further, adding a lane-departure warning system, a distance alert if you’re following too closely, an adaptive cruise control that automatically brakes and accelerates in stop-and-go traffic, and an advanced collision-warning system with auto-braking that works at higher speeds than the City Safety system: it can even spot pedestrians and apply the brakes to avoid them.

Volvo offers the XC60 starting for $39,995 (plus $1,095 in destination fees) for the base front-wheel drive model with the non-turbocharged 3.2-litre V6 engine, while the AWD T6 R-Design Platinum test car tops the range at $59,095 plus options and destination fees. Either way, the XC60 makes a perfect partner for life’s adventures, offering all the safety and practicality traditionally associated with Volvo in a stylishly modern, sporty package.