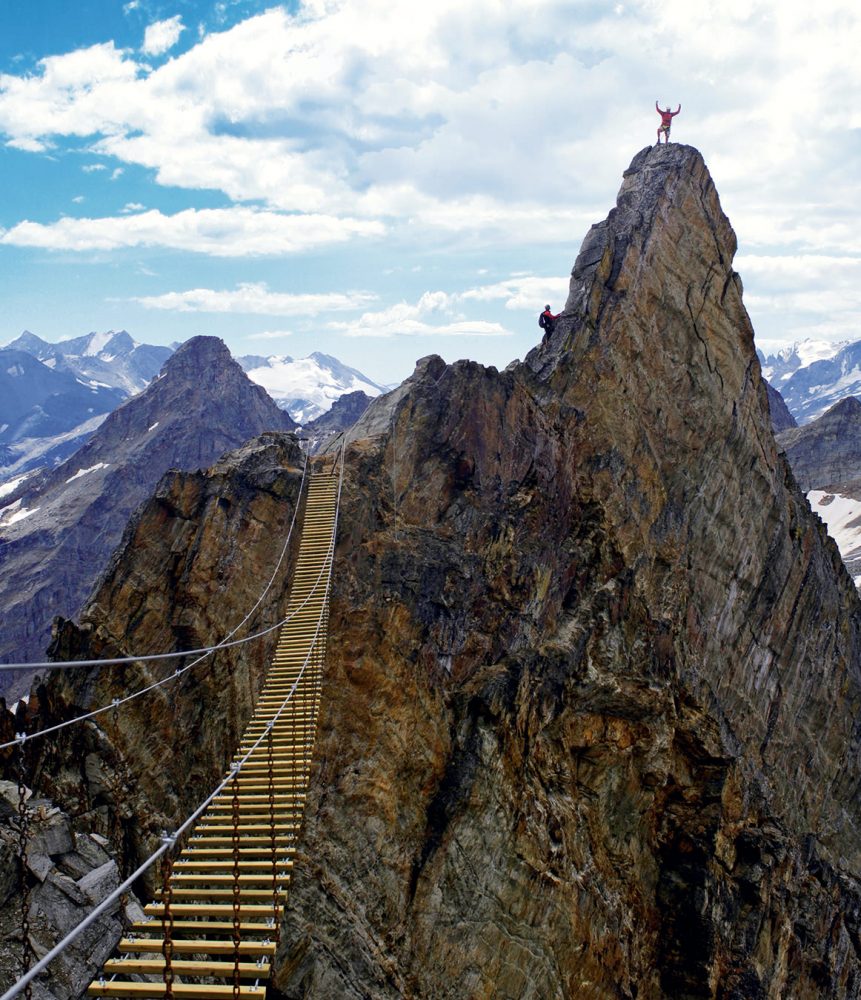 The Mount Nimbus via ferrata in the Purcell Mountains, B.C.

Perched on the edge of a cliff in British Columbia’s Purcell Mountains, a first-time climber searches anxiously for a place to wedge a shaky foot into, while cracked fingertips clutch rock. Some thousand feet down below is a peaceful valley and the flat ground on which she, along with other adventure enthusiasts, stood less than three hours ago. The only thing keeping the climbers (one of whom confessed a fear of height just before setting off) from falling are harnesses tethered to a steel cable, drilled into the rock. “Yippee,” squeals the guide from overhead, where more cables, bolts, and metal rungs indicate that the route, called a via ferrata, continues.

Italian for iron way, via ferrata is hugely popular in Europe, where there are thousands of fixed climbing routes along the Alps, the Pyrenees, and the Dolomites. Climbing on via ferrata dates back to the First World War, when Italian soldiers built bridges, ladders, and tunnels, bolting cables and metal steps to rock faces in an effort to move troops relatively quickly through the Dolomites. Unlike the sport of rock climbing, which requires—along with serious technique—special shoes, ropes, and belay devices, just about anyone can ascend a sheer cliff face on a via ferrata.

“It took us two years to decide this was the site where we would build our via ferrata,” says Carl Trescher, one of the Canadian Mountain Holidays (CMH) guides that designed and helped build this particular via ferrata. There were a lot of things to consider, such as melting snow, to face the right direction, and an escape route, should inclement weather or another emergency happen to arise. “We wanted a wild, exposed place that’s not such super hard climbing that you would never get there,” he says. “So that really narrowed our choices of where we could build the thing. Luckily, Mount Nimbus fit our entire bill.”

Stretching jagged and sharp into the sky, Mount Nimbus is the kind of wild and extraordinary place that no casual hiker or climber could easily reach. Yet here was a group of nine, half of whom were consummate beginners, scampering over rocks with little hesitation. Like some of the most impressive via ferratas in Europe, this one offers an experience suited for Indiana Jones wannabes.

Most other via ferratas in Canada—including one in Whistler, one near Lake Louise, and another in Mont Tremblant National Park—are around 200 to 300 metres long. “As far as a full-day climbing experience in the alpine, there’s nothing in North America like the Mount Nimbus ferrata,” says Trescher. To get here, climbers signed up for CMH’s heli-adventure at Bobbie Burns Lodge, south of Golden, B.C. After a helicopter ride to the aforementioned alpine meadow and a demanding hike, climbers donned helmets and harnesses, clipped themselves to a bolted wire cable, and performed seemingly impossible feats like traversing knife-edge ridges, crossing a perilous-looking suspension bridge, and clambering up vertical rock using metal rungs fixed to the mountain.

Back at the lodge, after a soak in the outdoor Jacuzzi and handcrafted cocktails at the bar, the group of climbers traded stories about the exhilarating, take-your-breath-away (both figuratively and literally) experience. The real enemy turned out to be not a fear of heights or physical prowess but the climbers’ own bodies: tender soles, blistered hands, and quadriceps unaccustomed to being, well, used.

After dinner, the climbers inquired about options for the following day, and Trescher, face lighting up and blue eyes sparkling, talked about the Conrad Glacier via ferrata, the newest in Canada. He described a white-knuckle adventure wherein guests zipline across a surging river, play tight-rope walker over a misting waterfall, traverse horizontal slabs of rock, and climb up an iron stairway to heaven alongside an ethereal glacial field. “So, who’s interested in doing that?” he asked, looking around the room. Everyone was.