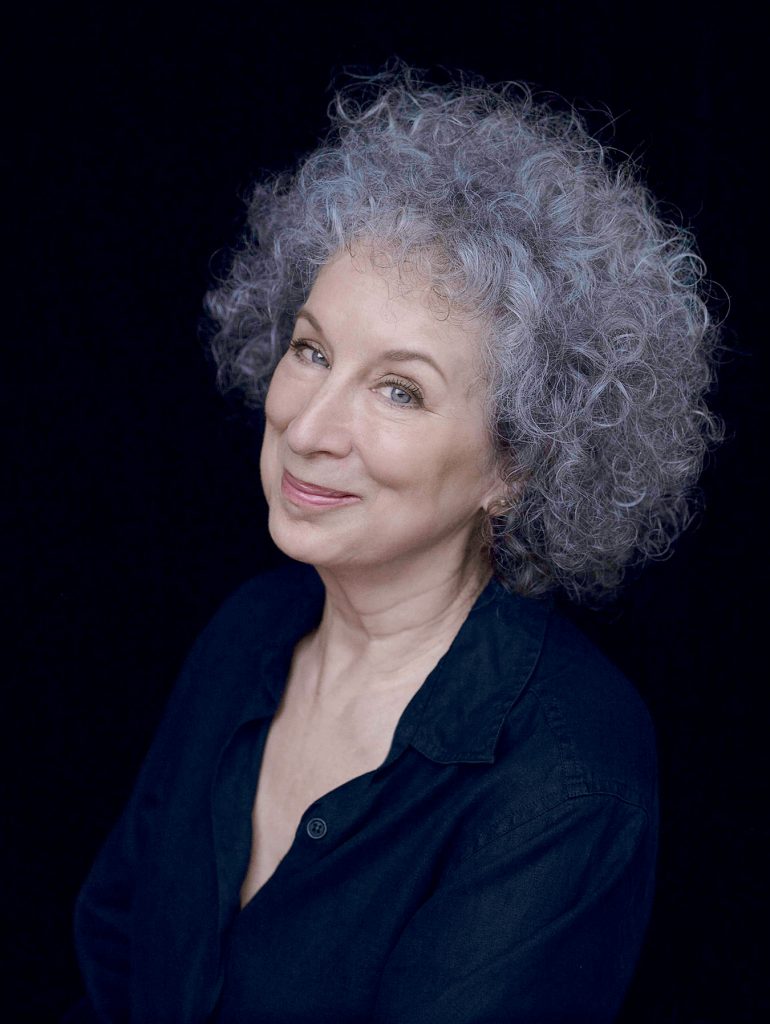 On a sunny, spring afternoon in Toronto, a platter of gooey, gourmet grilled cheese sandwiches is being passed around the prettily set table in the kitchen at book retailer Indigo’s headquarters, and Margaret Atwood—novelist, essayist and poet—is digging right in. The menu is, perhaps, no accident: cheese sandwiches are the stuff, the writer has said, on which authors are known to subsist.

“Why do we want to read about the past so much right now?” she asks the intimate group between stringy bites, and when someone responds, “nostalgia,” Atwood, ever wry, comes back with, “Why? You all seem to be having a good time today.” Her presence is palpable; those sharp blue eyes and trademark nest of corkscrew curls—these days almost pure white—a persistent reminder of the monumental impact that the tiny woman sitting amongst us has made on the history of Canadian literature.

The past, however, does not appear to factor heavily in Atwood’s world these days, and so the group gathered around will be discussing the future: the release of MaddAddam (2013), the conclusion of Atwood’s speculative fiction trilogy that began with Oryx and Crake (2003) followed by The Year of the Flood (2009); the future of the planet; and the future of publishing.

While on tour for Oryx and Crake, Atwood dreamed up the concept for virtual, remote book-signing tool LongPen, which launched in 2006. She was further instrumental in the launch of Fanado, a fan interaction app that she helped to finance through crowd-funding website IndieGogo. She continues to release a serial novel, Positron, on the digital publishing imprint Byliner.com, and is collaborating with novelist/iPhone game developer Naomi Alderman on another serial project called Happy Zombie Sunrise Home—this one for the Canadian website WattPad, for which she is also judging an online poetry content called the Attys. She’s in talks with developers to make the video games in Oryx and Crake a reality, and for MaddAddam she released her first ever book video trailer. For all this—and more—in April Atwood was honoured with the Innovator’s Award at the 2013 Los Angeles Times Book Prizes.

The Internet is simply the latest thing to pique Atwood’s curiosity. “Tools are tools,” she told the Los Angeles Times earlier this year. “Humans invent them to do things, like communicate, and that impulse is the same whether we’re talking about papyrus, the telephone or the Web.” As for how the tool du jour affects literature, Atwood says that though the Internet may seem a complex and foreign arena that threatens to interlope on the integrity of written works and the systems that surround them, looking more closely reveals familiar elements. “The book is not dead. Reading is not dead. The human interest in stories is not dead,” she asserted at TOC 2011. “But we are in the midst of a sea change in transmission tools, the likes of which we have not seen since the Gutenberg print revolution. As with that historical moment, there was a lot of turmoil, and nobody could foresee all the consequences.”

Turmoil and no way to foresee all the consequences is an apt summary of the end of The Year of the Flood, and that’s where MaddAddam picks up, going back into the earlier lives of a couple of characters in the two earlier books, most prominently Zeb and Adam One. “I won’t reveal that much,” says Atwood, taking a second helping of grilled cheese, before adding, “There’s sex in it, but Fifty Shades of Grey it’s not. As for the conclusion of Atwood’s cautionary trilogy, she says only, “Whether you’re going to be happy or sad about it at the end, that’s going to be up to you.” But remember, she is an optimist, so chances are there will always be more cheese sandwiches.