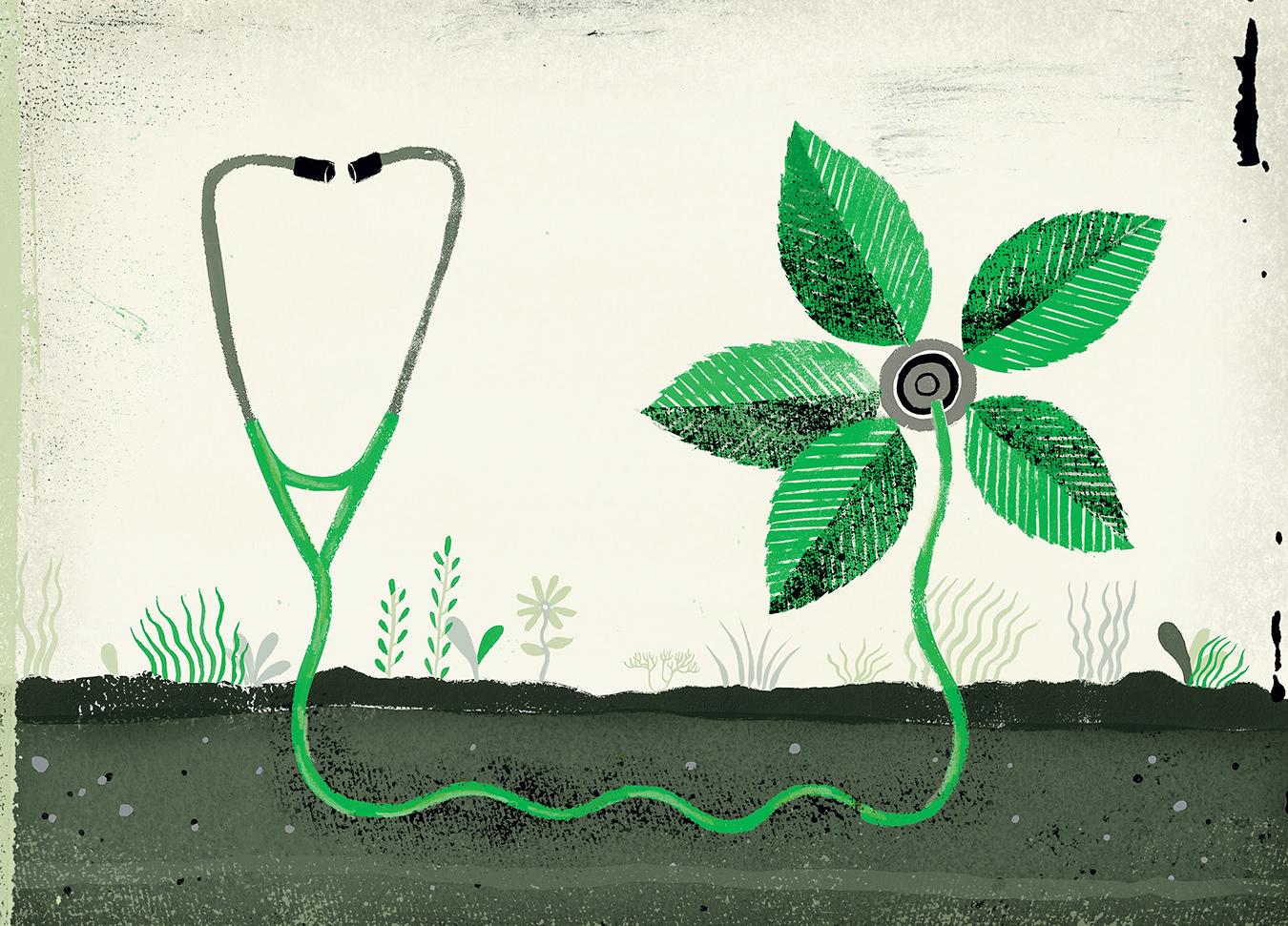 Doctors Hal Brown, Lawrence Chan, and Eric Posen founded their medical practice in 1985. Despite having already built a successful chiropractic practice together, they decided to broaden their skill set as holistic practitioners and pursue other avenues of education. Between them, they earned licenses in naturopathic medicine and acupuncture; received additional training in traditional Chinese medicine, applied kinesiology, chelation, and IV therapy; and upgraded certificates in pharmacology and prolotherapy.

Chan, a spry 60-something, sits in his seventh floor office at Integrative Naturopathic Medical Centre at West Broadway and Birch Street. The spacious facility includes multiple treatment rooms, a full medical laboratory, a natural dispensary, and a skincare centre. “Our idea of integrative is different,” explains Chan. “Each doctor is integrative.” Today, the health team comprises six integrative naturopathic doctors who work together with a team of in-house specialists, including two registered massage therapists, a doctor of traditional Chinese medicine and licensed acupuncturist, a chiropractor, and a registered holistic nutritionist.

The examination and treatment procedures available to naturopathic doctors are what drew Brown, Chan, and Posen to each become licensed. “As naturopathic doctors the door is wide open. It’s one of the most all-encompassing complementary alternative medicine training one can receive. We can use a holistic approach using different modalities,” says Chan. Naturopathic medicine is based on the principle of vis medicatrix naturae, the healing power of nature. The human body has an amazing capacity to heal itself, but sometimes environmental and life factors become obstacles to making a full and successful recovery. “Our model focuses on the whole person,” he says, explaining that a holistic approach that involves disciplines such as homeopathy, nutritional supplements, diet and lifestyle coaching, and physical therapies gives patients the best chance for health because it is preventative in nature.

In fact, the Centers for Disease Control and Prevention says that debilitating chronic diseases like diabetes, arthritis, obesity, cardiovascular disease, and cancer are not only the most costly but the most preventable. Research suggests that 70 to 75 per cent of all cancers are preventable (with some reports citing figures as high as 90 to 95 per cent), and the World Health Organization states that “Prevention offers the most cost-effective long-term strategy for the control of cancer”—compelling reasons why lifestyle modification and early intervention are integral to Integrative’s preventative model.

“We’re here to catch things that regular medicine won’t. We have the tools to detect things early.”

“Western medicine looks at crisis intervention, and for that there’s none better. But if I have a chronic illness and want to get better in the long term—not just alleviate symptoms—a naturopathic perspective is valuable,” says Chan of conventional medicine’s specialized treatment of symptoms versus integrative medicine’s whole-person inventory of underlying causes. “We’re here to catch things that regular medicine won’t. We have the tools to detect things early,” he says. “But we’re also very pragmatic. If you get the flu each year and have tried everything to avoid it, we don’t count out getting a flu shot or other conventional treatments.”

Integrative’s doctors are free from the confines of 10-minute appointments with patients that their conventional colleagues are bound by. An intake session at the centre involves dedicated time with a naturopathic physician discussing current concerns and medical history, and often, applied kinesiology is also performed. Following a thorough conversation, in-house specialized testing may also be recommended, such as body composition, food sensitivity, and standard lab testing (including thyroid, kidney, and liver function, and electrolyte and cholesterol levels).

Applied kinesiology is a non-invasive clinical assessment technique used to gain information about the body’s health; a physician applies consistent pressure to a targeted muscle group to test the muscle’s ability to resist. Essentially, this is an assessment of the body’s control centre, the nervous system, and by extension, the network of systems—respiratory, cardiovascular, digestive, endocrine, and reproductive, etc.—under its jurisdiction. “It’s a unique and effective feedback tool that enables the skilled practitioner to integrate all of the information collected from the patient’s medical history, physical exam, and other diagnostic methods,” says Chan. In a study published in the International Journal of Neuroscience, applied kinesiology is described as “a conceptual expansion of the standard neurological examination process”. The technique was developed by Dr. George Goodheart in the 1960s (who Brown, Chan, and Posen trained directly under) and evaluates the balance between the biochemical, mental/emotional, and structural health of each individual. These three states form the Triad of Health, a cornerstone of Integrative’s whole person philosophy. Problems on one side of the triad can affect the others. For instance, a chemical imbalance can cause mental symptoms such as depression and anxiety, and mental stress can manifest as physical pain, like headaches or migraines, and intestinal upsets. The whole person model sees that everything is connected.

“It’s damaging to patients if they feel like they have to choose sides. We meet patients wherever they’re at.”

A new generation of diversified naturopathic doctors has joined the centre, including Chan’s daughter, Alex Chan, who was part of Integrative’s residency program, the first certified naturopathic residency program in B.C. when it launched in 2012. Graduates from naturopathic colleges across Canada and the U.S. recognized by the Council on Naturopathic Medical Education are eligible to apply for the program, and are able to learn from and expand upon the integrative approach developed by the centre’s founders.

Alex has done just this, formalizing the Integrative cancer care program which works in conjunction with each patient’s general practitioner and/or oncologist. “It’s damaging to patients if they feel like they have to choose sides. We meet patients wherever they’re at,” says Alex, who stresses the importance of fostering trust on both sides of the medical tracks. Treatment options include preventative measures based on family history, immunity-boosting IV therapy, nutritional counselling to coincide with active treatment (surgery, chemotherapy and radiation) and its side effects, acupuncture, stress management, and emotional support to enhance quality of life during late stage treatment.

In addition to cancer care, Integrative’s medical team offers a wide range of specialty services including family practice, hormones and fertility, stress and fatigue, food sensitivities and gastrointestinal health, and pain and sports medicine. The multifaceted practitioners and well-rounded healthcare team have attracted a range of high profile clients to their care, including former provincial premier Mike Harcourt, 11-time Canadian high jump champion Debbie Brill, acclaimed Canadian dancer and choreographer Margie Gillis, and Ballet BC, for which Integrative is the official wellness clinic.

In the 30 years since co-founders Hal Brown, Lawrence Chan, and Eric Posen began their medical practice, they have continued to push boundaries to offer their patients the best blend of eastern wisdom, integrative medicine, and conventional treatments supported by the latest scientific research, and have expanded their team with like-minded practitioners. As the collective consciousness slowly sways toward understanding the complex balance between biochemical, mental/emotional, and structural health, Integrative Naturopathic Medical Centre endeavours to be at the forefront of this whole person approach.