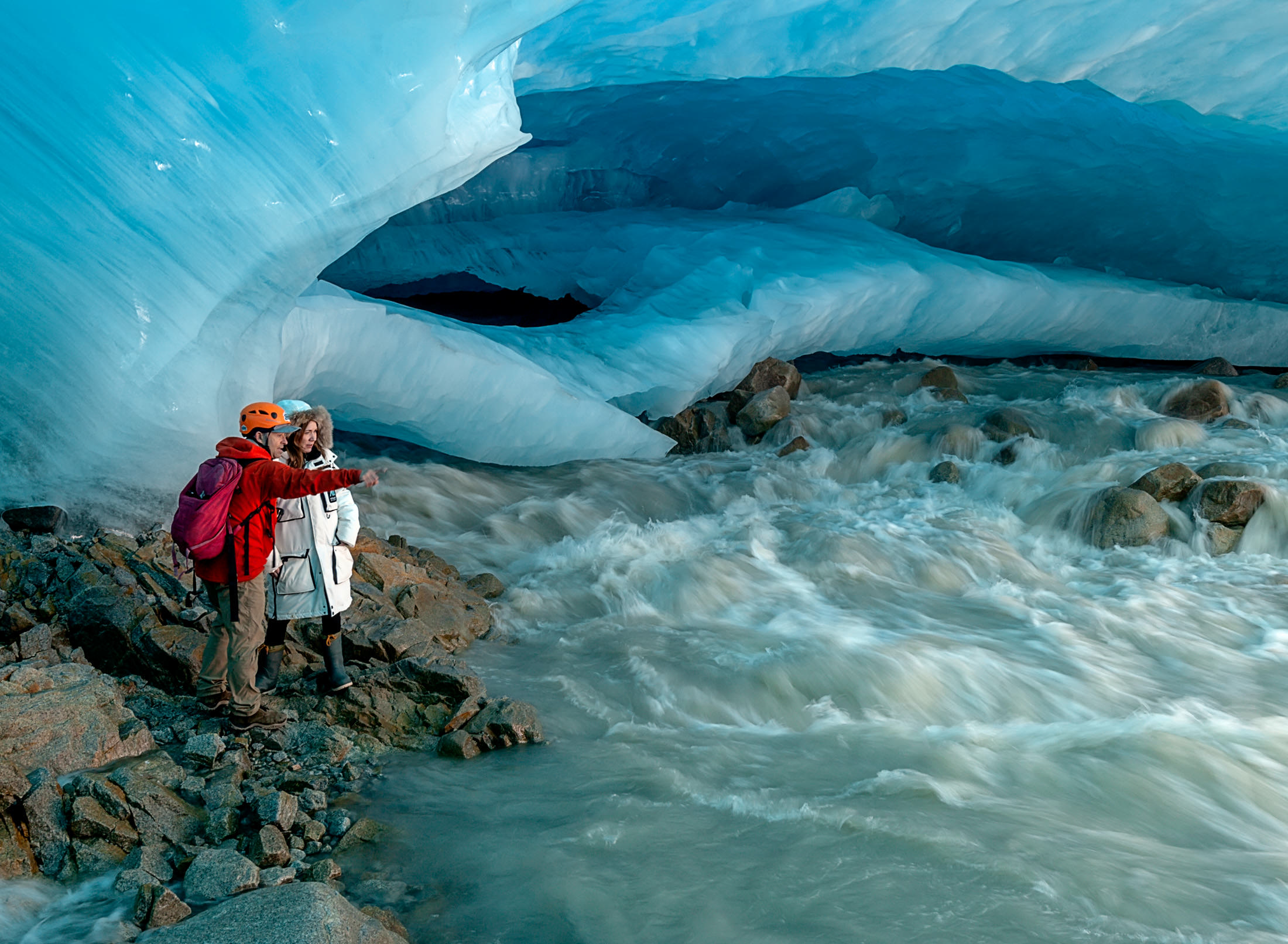 I could be standing on the surface of the moon: this rocky ground, covered with large sheets of ice, riven with long, endlessly deep crevasses, is about as otherworldly as it gets. It may have taken a scant 25 minutes or so in a helicopter from just north of Whistler, but No Limits Heli Adventures has transported me to a different space and time. As I slip and slide and try to get a grip on this unfamiliar terrain, my bearings have been completely upended. Where am I?

Mount Meager is a glacier-clad volcanic complex. We landed on the glacier’s edge in a natural shallow bowl between peaks. In winter, this will be a powder basin, but today it’s still summer, and the line between ice and rock is clear. Out of sight, elk, grizzly bears, and mountain goats—creatures tough enough to survive at this inhospitable altitude—get on with staying alive. I do the same, making my way gingerly across the surface, happy to comply with instructions to follow our guide’s footsteps exactly.

From the surface, you could easily miss the entrance to the caves—there are two big enough for us to venture through today. These are ephemeral structures—reminders that our world is constantly on the move. Though it is estimated to be somewhere between 12,000 and 20,000 years old, the glacier’s future is in doubt: Marco, our No Limits pilot, tells us he’s seen its edge recede year-on-year. 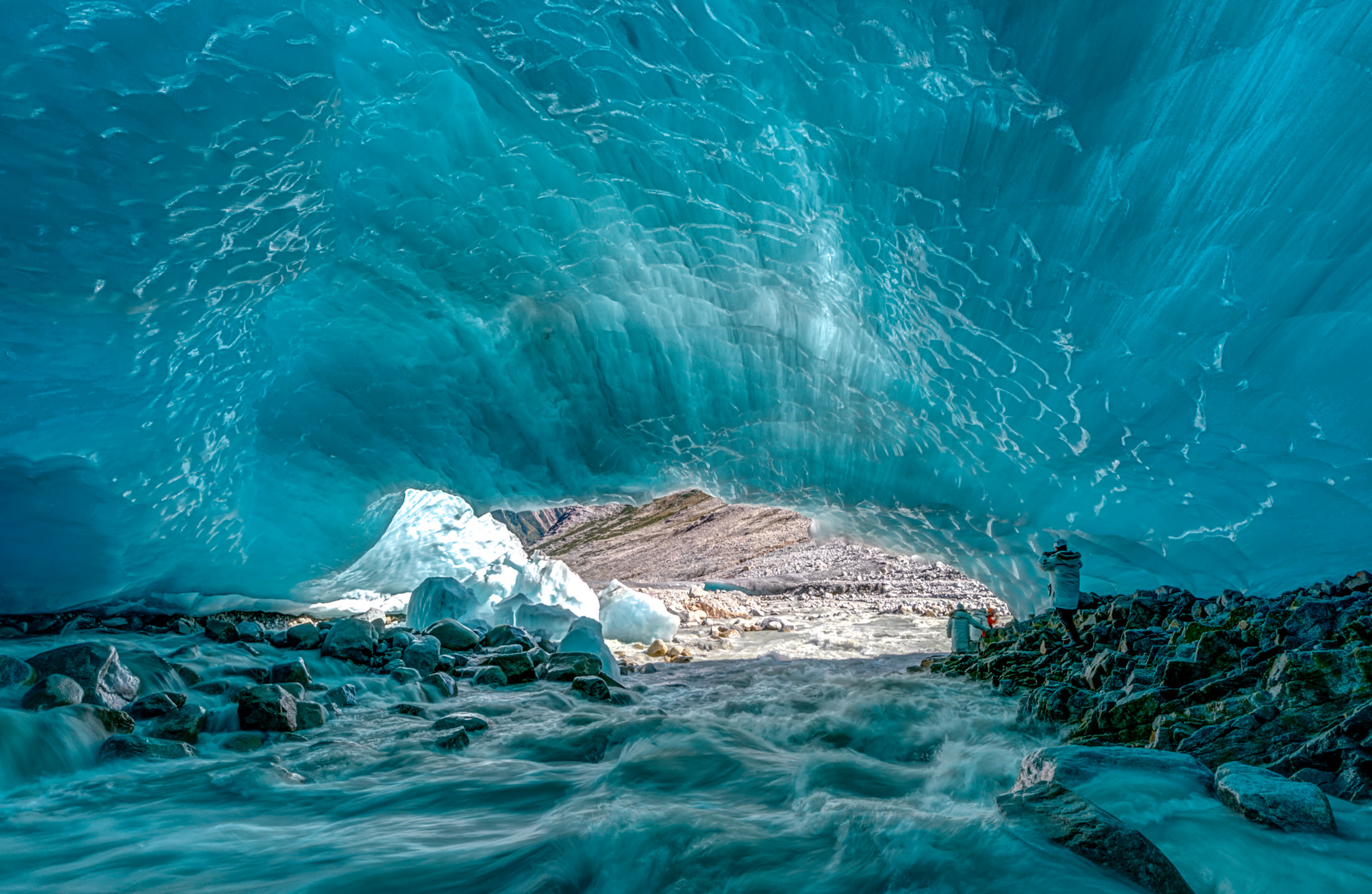 The hard hat that seemed a bit over the top a few minutes ago is my saviour as I thwack my head against a frozen wall. We’re inside an ice cave, a phenomenon created as meltwater carves its path downwards, hollowing out the glacier from within. Widest and tallest at the top, the ice cave’s interior shimmers with an intense and iridescent blue light, as if an arc of clear Caribbean water is suspended overhead. This mesmerizing colour effect is the result of compression over time; the extremely dense ice that surrounds us could be decades, even centuries old. A cathedral built by nature.

The undulating walls are smooth, scalloped rather than chiselled out as the water burrows its way through and away to the Lillooet River. The floor of the cave, though rocky and uneven, contains a surprising amount of fine-grained sand (No Limits tours run all year round; if you visit in winter, the floor of the cave will be covered in snow). We can only get so far in: the gentle stream that has accompanied us as we picked over boulders and ducked (some of us more successfully than others) to avoid low level ice, eventually merges with others to become a torrent of sub-zero whitewater, raging beneath its own ancient glacial hood.

We emerge from this spectacle to another: a table set up right there on the glacier, boasting an incredible array of charcuterie and salads, dips and breads, all prepared by Whistler’s acclaimed Bearfoot Bistro. Nothing has been forgotten: there are plates and napkins and—is that a sword? Yes, I can now say I have sabred Champagne at 4,000 feet.

It’s been an incredible day, but there’s a surprise in store: the owner of No Limits, Denis Vincent, will pilot us back to base via a stop on another part of the volcanic complex, where we will see evidence of its active status. The good news: it last erupted slightly more than 2,400 years ago. The not-so-good news: in 2016, a passing helicopter pilot reported seeing three holes in the mountain spewing something that looked like smoke. 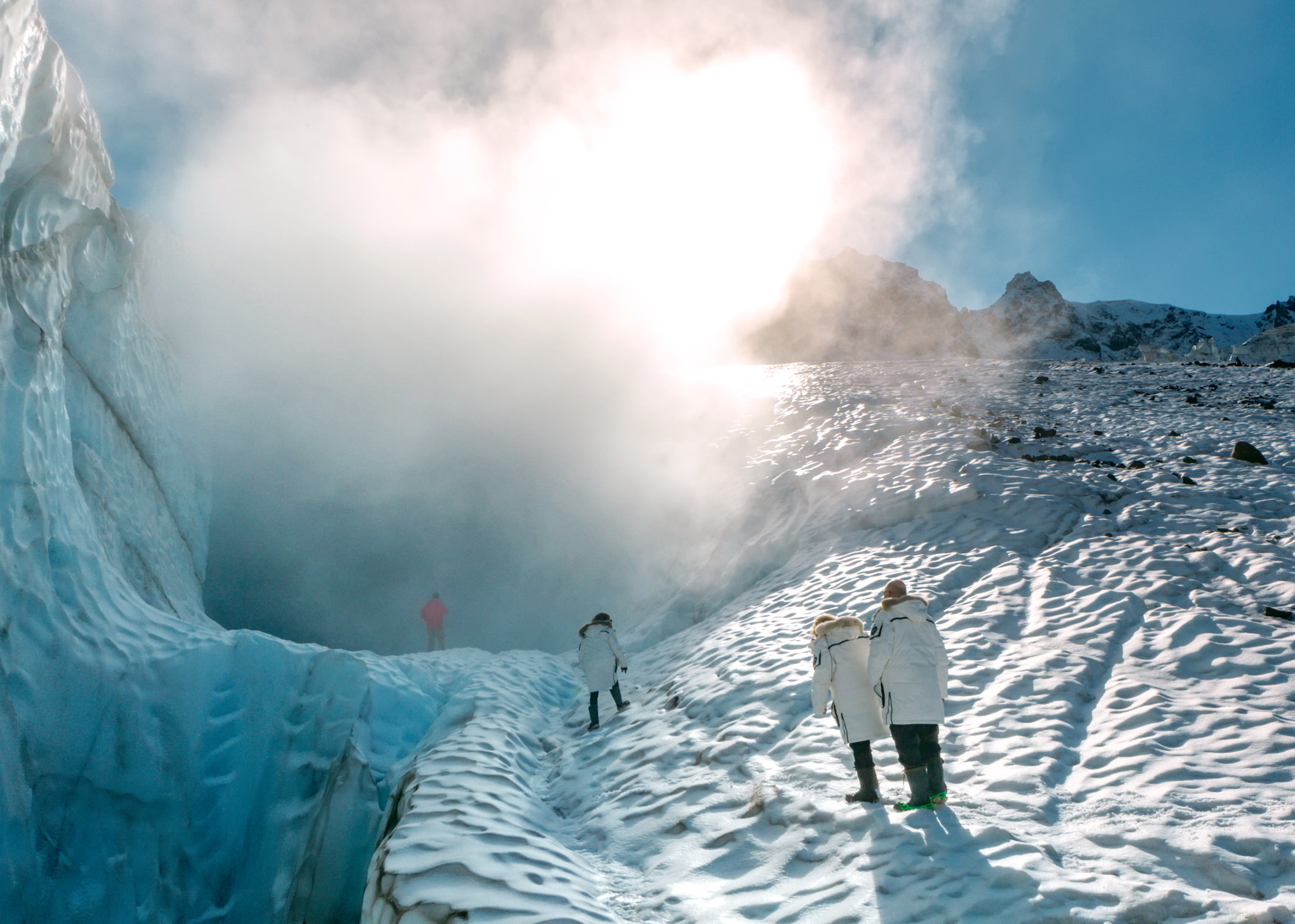 An active fumarole on the Mount Meager Volcanic Complex.

As we circle around to find a good spot on which to land, a thick mix of steam and gas is pouring out from these cracks (more properly termed fumaroles). The putrid smell of rotten eggs—the combination of hydrogen sulphide, carbon dioxide, and steam from deeper inside the mountain—is, quite literally, breathtaking. If it weren’t for the hours before spent in the capable and safety-conscious hands of our very qualified guide, April, I might question the wisdom of strapping on crampons in order to take a closer look.

Where the ice cave was brilliant topaz, the opening of this fissure is murky, the surrounding packed ice blackened in places. The gaping hole is huge and the drop beyond it, deep (a scientist from Simon Fraser University has estimated the ice beneath could be as much as 130 feet thick). We don’t hang around: as fascinated as we are, the smell from the mountain’s dyspeptic innards is overwhelming.

As Denis sweeps the helicopter up and over the massif, I look down with new eyes. Just this morning, I sat and gasped at the beauty of the landscape seen from above, marvelled at how pristine, how still, the mountains appeared. Now I am quiet, in awe of the power of this fierce wilderness, grateful to have felt its power up close.

Read more from our Winter 2019 issue.