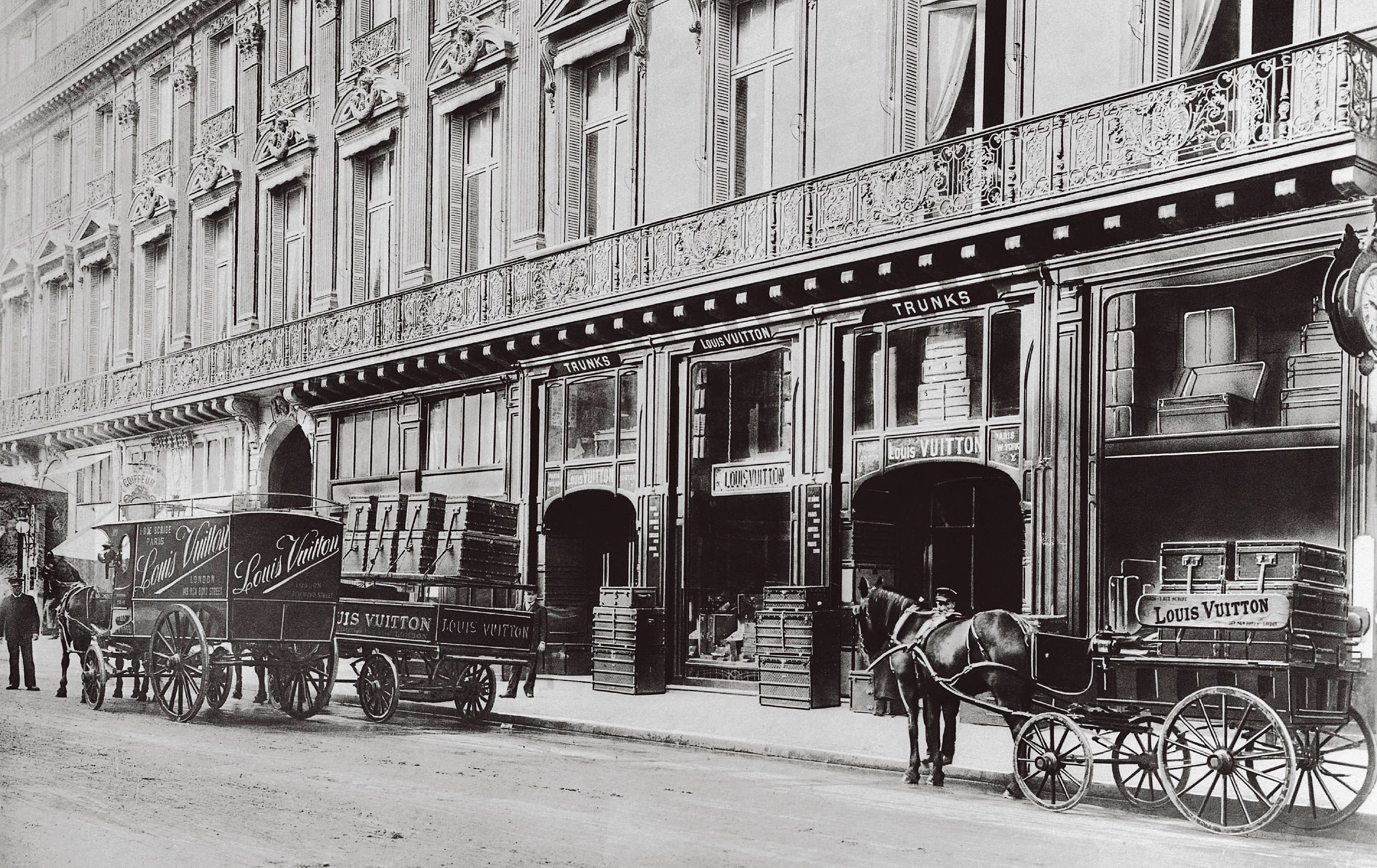 Horse-drawn vans deliver trunks manufactured in Asnières to the Louis Vuitton store in Paris circa 1872.

“If I’d visited his mother in the hospital after he was born, I’d have said, ‘Don’t worry about your son. He’s going to work hard, and he’s going to do well,’” astrologer Susan Miller tells me by phone from her home in Manhattan. She’s referring to Louis Vuitton, whose auspicious birth chart portended much of the success the famous Frenchman would have laying the foundations of one of the most prominent luxury houses of all time.

Vuitton was born 200 years ago—on August 4, 1821—an event celebrated in grand style with Louis 200, a collaboration with 200 visionaries, from K-pop group BTS to writer Gloria Steinem to luxury architect Peter Marino, who each created their own version of Vuitton’s first wooden trunk. (The contemporary trunks are to be auctioned off for charity.) Miller, an astrologer favoured by many in the fashion industry, created a trunk that contains a miniature solar system as it looked on the day of Vuitton’s birth. She also conducted a natal reading for him based on his time of birth, which paints a detailed picture of his character. Sun in Leo, moon in Libra, Cancer rising—Miller says Vuitton had the potential to create something revolutionary. “Leos love unique things. They don’t want to copy anyone,” she says. And Libras are said to be social and diplomatic—two traits that would have helped Vuitton secure his friendship with Napoleon III’s wife, Empress Eugénie. Despite his subsequent influence and fame, little information exists about Vuitton the man, but Miller says she knows this much: “A horoscope is almost like a flower, where the petals open and you get to know the person better and better. The more I spend with Vuitton’s chart, the more I admire him.”

As part of Louis 200, the company is seeking to illuminate the life of its founder with a novel by French writer Caroline Bongrand. The book recounts Vuitton’s humble beginnings: he left his hometown of Anchay, in the Jura region of eastern France, at the age of 14 and arrived in Paris two years later, having travelled there by foot. There was a lengthy apprenticeship with renowned trunk maker and packer Romain Maréchal.

In 1854, bolstered by his wife, Clemence-Emilie Parriaux—a woman with a strong sense of both fashion and business—he founded his own maison at 4 rue Neuve-des-Capucines near Paris’ famed designer hub, Place Vendôme. He was 33.

Business boomed. He developed a close rapport with couturier Charles Frederick Worth and became known as an expert packer of the era’s voluminous garments, leading to his appointment as Empress Eugénie’s trunk maker and packer before the fall of the Second Empire. Suspecting luggage would assume greater importance as railways revolutionized travel, Vuitton reconceived trunks with flat lids, allowing them to be easily stacked and their contents—from complex and neatly packed garments to jewellery and perfumes—kept upright. He covered them in Gris Trianon, a waterproof coated canvas he’d developed. In 1886, his son Georges pushed functionality further by inventing an unpickable lock that is used in some form to this day. 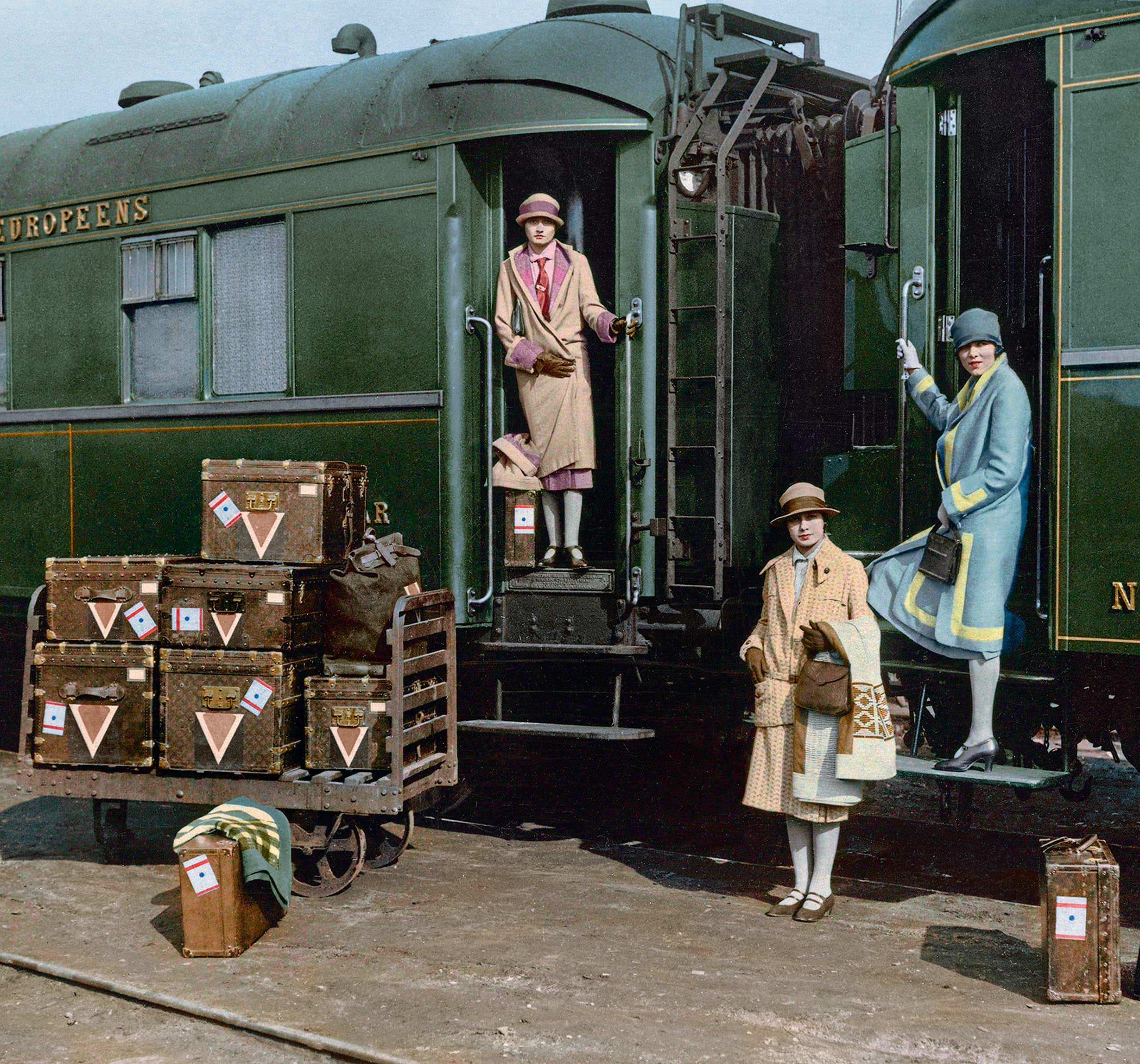 Vuitton trunks have come to symbolize travelling in style, and the LV monogram endures as an emblem of cachet. Cinephiles will recall the ubiquity of this statement luggage in films, from 1963’s Charade, in which Audrey Hepburn travelled from the French Alps to Paris with her own set, to 1997’s blockbuster Titanic, in which the ship’s first-class suites are shown strewn with lavishly filled LV trunks awaiting their watery fate. In 2007’s The Darjeeling Limited, the design-obsessed director Wes Anderson even created his own version—complete with animal figures.

The iconic monogram has itself evolved over the years, beginning in 1896, when Georges Vuitton added the signature geometrical and floral motifs to the interlocked LV as a protection against the many copies appearing at the time. Reportedly, the design was inspired by the 19th-century trend of using Japanese mon, or floral crests. Another of Louis 200’s collaborators, artist Kris Knight, took that inspiration for his trunk, covered in impressionistic black pansies.

“I’ve been really obsessed with the Victorians and their obsession with self-care during the peak of tuberculosis,” he tells me, speaking from his home in Toronto. Connecting the dots to our own pandemic-era wellness habits, from baking sourdough bread to meditation, Knight mined the Victorian passion for gardening and by extension floriography, a language of flowers that ascribes a meaning to each plant. “It’s a notion I use a lot in my own portraits—I will use a floral pattern that symbolizes a little bit of the personality of my sitters,” he says. For his trunk, Knight paid homage to a popular trend of wealthy Victorians, the black garden. “Their gardens became more and more elaborate, and like fashion, they’d try to get the most exclusive thing, which at the time was dark flowers,” he notes. “If you were super wealthy or edgy, you would have a black garden.”

Representing mysticism and a yearning for everlasting love, Knight’s black pansies seem a fitting message to mark such a milestone.