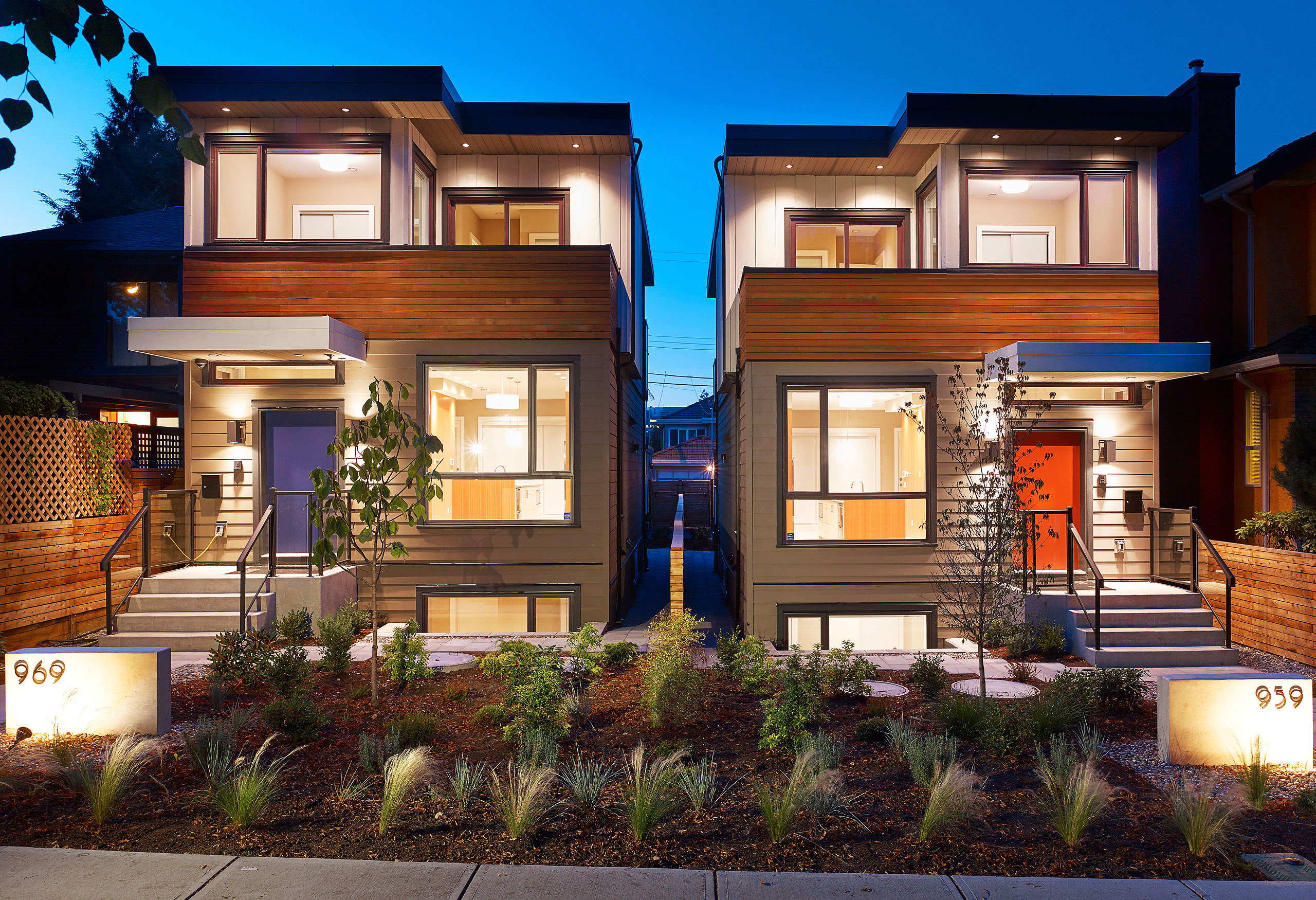 The project was to be a proof of concept for his fledgling architecture firm—a demonstration the team could design and build a passive house, one that consumes 90 per cent less energy than a conventional building, on a lot that permitted a structure only 18 feet wide. Energy-efficient buildings are simplest when they are cubic and blocky with tiny windows, but this house would be not only long and narrow, but also open and livable with expansive windows for plenty of natural light, all while conforming to Vancouver’s 2032 energy standards—which Bray calls “incredibly hardcore.”

Then, before construction could begin, the architect’s collaboration with a developer fell through, and to keep the project alive he was forced to buy the house himself as a family home. For that to work, the slender building would have to be laid out with painstaking efficiency to fit five bedrooms, three above ground and two below—despite a peat bog descending 40 feet beneath the site’s surface.

“I had no choice. I had to make the thing work for my family,” Bray says. “That’s why we put so much work in it to get it to the way it is now.”

The result, Passive Narrowtive, is a Swiss Army knife of building technology, including a system of heat recovery ventilation, heat pumps, heated concrete tiles, and solar panels that warm the house in winter, while in summer natural ventilation draws in fresh cool air and vents through the roof. The home won Bray a handful of awards.

Though the house is a dense study in functionality, it is also beautiful. The strict simplicity of the building, softened by a pair of wood canopies—which shade against the summer sun while letting in winter light—needs no ornamentation. Passive Narrowtive is an ode to design under constraint—and to the idea that what is constrained need not be boring. 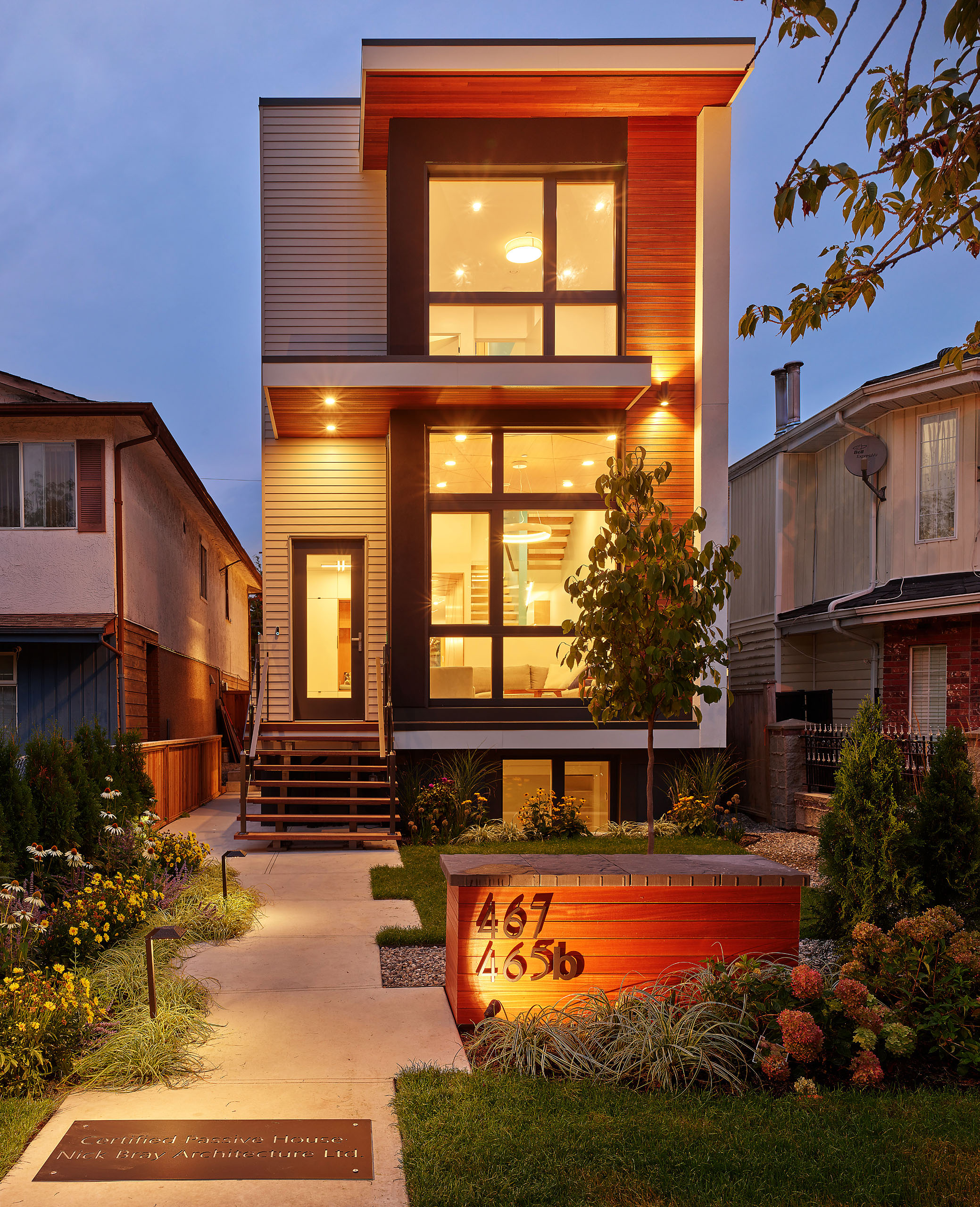 If you set out through the residential streets of Vancouver, within half an hour you’ll see a dozen narrow two-storey rectangular houses with semi-basements and low-pitched roofs, towering half a storey over the neighbouring Vancouver Specials. A patchwork of wood siding, beige stucco, and grey brick divides the facades into vertical asymmetric thirds, punched through with small, cubist windows and broad, decorative doors, all set behind iron-rail fences and zig-zagging concrete front walks. The buildings are new, neatly modern, and drearily similar.

While they look the same, these homes—sometimes called millennial builders or millenium contemporaries—are less a cohesive architectural style than a response to stringent constraints from the City, homeowners, and the market.

“If you’re buying a million-dollar plot of land, you want to make sure that the house you build checks all the boxes, not just for you, for your sake, but for resale value,” architect Janvin Lowe explains. “If you had homeowners who didn’t have to think about resale value, or didn’t have to accommodate a family of three or four, you’d have different-shaped houses that were more unique. People don’t want to reinvent the wheel.”

And there are a lot of boxes to check. Vancouver home buyers are desperate for floor space on narrow 33-foot lots, meaning builders have to fill the envelope left by City-mandated front, back, and side yards. A rental suite helps cover the mortgage, necessitating the semi-submerged basement, while limits on porch depth dictate the asymmetrically set-back front door. Energy efficiency regulations make blocky shapes and small windows attractive, and accessibility requirements shape both the path of front walkways and the placement of main-floor bathrooms. When all these requirements are taken into account, the architectural sameness is less a choice than a product of convergent evolution.

These forces are much like those that seeded the Vancouver Special across East Vancouver in the 1960s to ’80s. But the aesthetic touches of the new 21st-century modern homes—the bare wood and vertical lines—draw from different inspirations than those earlier squat midcentury homes. 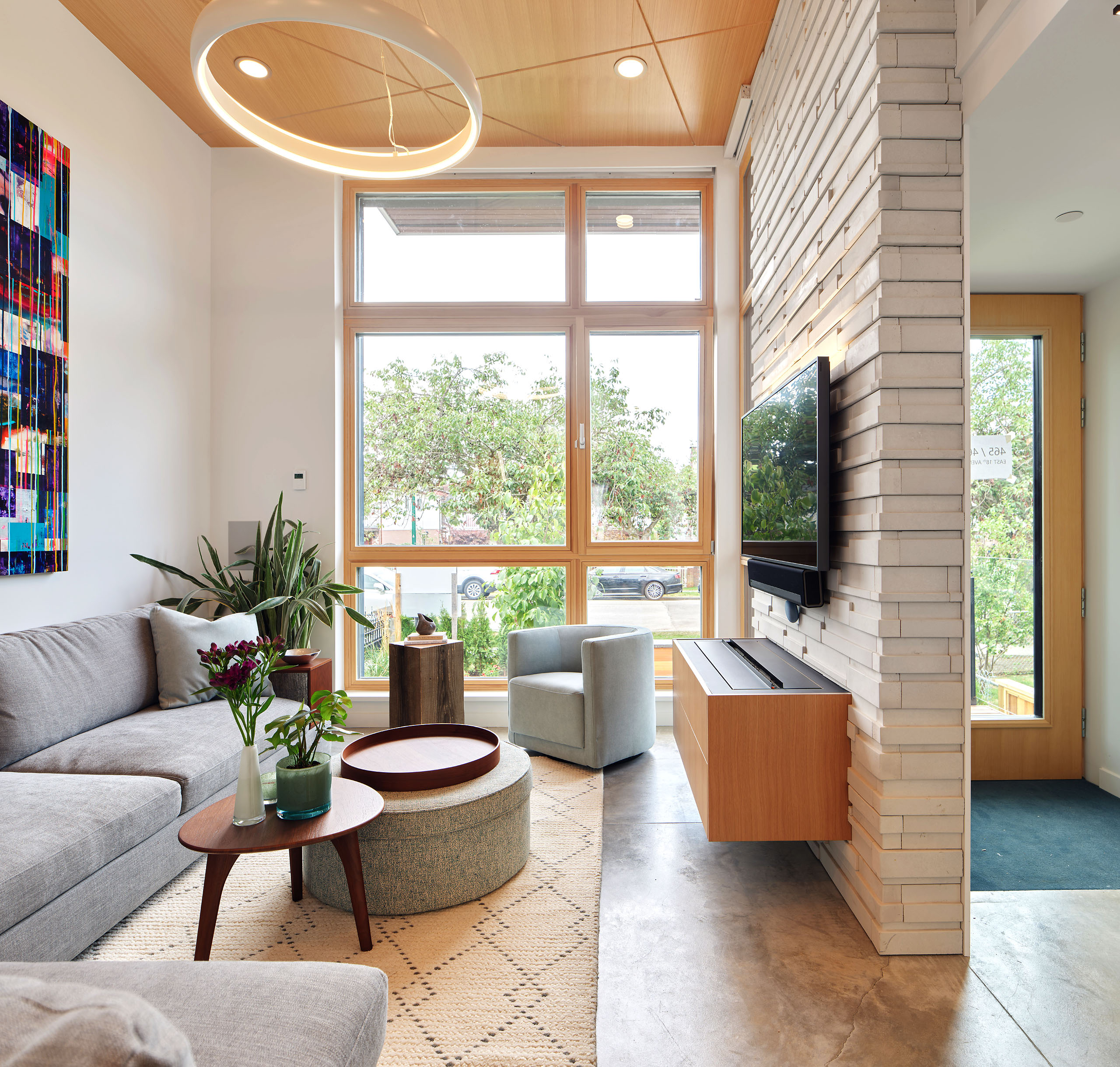 While the Vancouver Special proliferated through the narrow lots of East Vancouver, a distinctive new style of Vancouver architecture blossomed, particularly on the slopes of North and West Vancouver. Legendary Vancouver architects Ron Thom, Fred Hollingsworth, and Arthur Erickson, among others, drew from modernists such as Frank Lloyd Wright to build stunning, unique homes using natural materials, their interiors flooded with light through floor-to-ceiling windows even in the rainy Vancouver winters. Their footprints were thoughtfully positioned to align with the land and light.

Gairns points to a 1949 presentation from West Coast modernist architect Ned Pratt as a pure articulation of the style. Pratt stressed the importance of careful roof design to shelter from winter rain and summer sun, alignment and integration with the natural landscape, full south-facing windows for natural light, open floorplans, and a blurring of the distinction between interior and exterior spaces. This paints a picture far from the slapdash and cramped millennium contemporary.

But while Pratt’s description conjures up his own 1951 home, nestled in nearly an acre of garden in West Vancouver’s British Properties, its principles can work their way into the confines of narrow Vancouver residential lots. 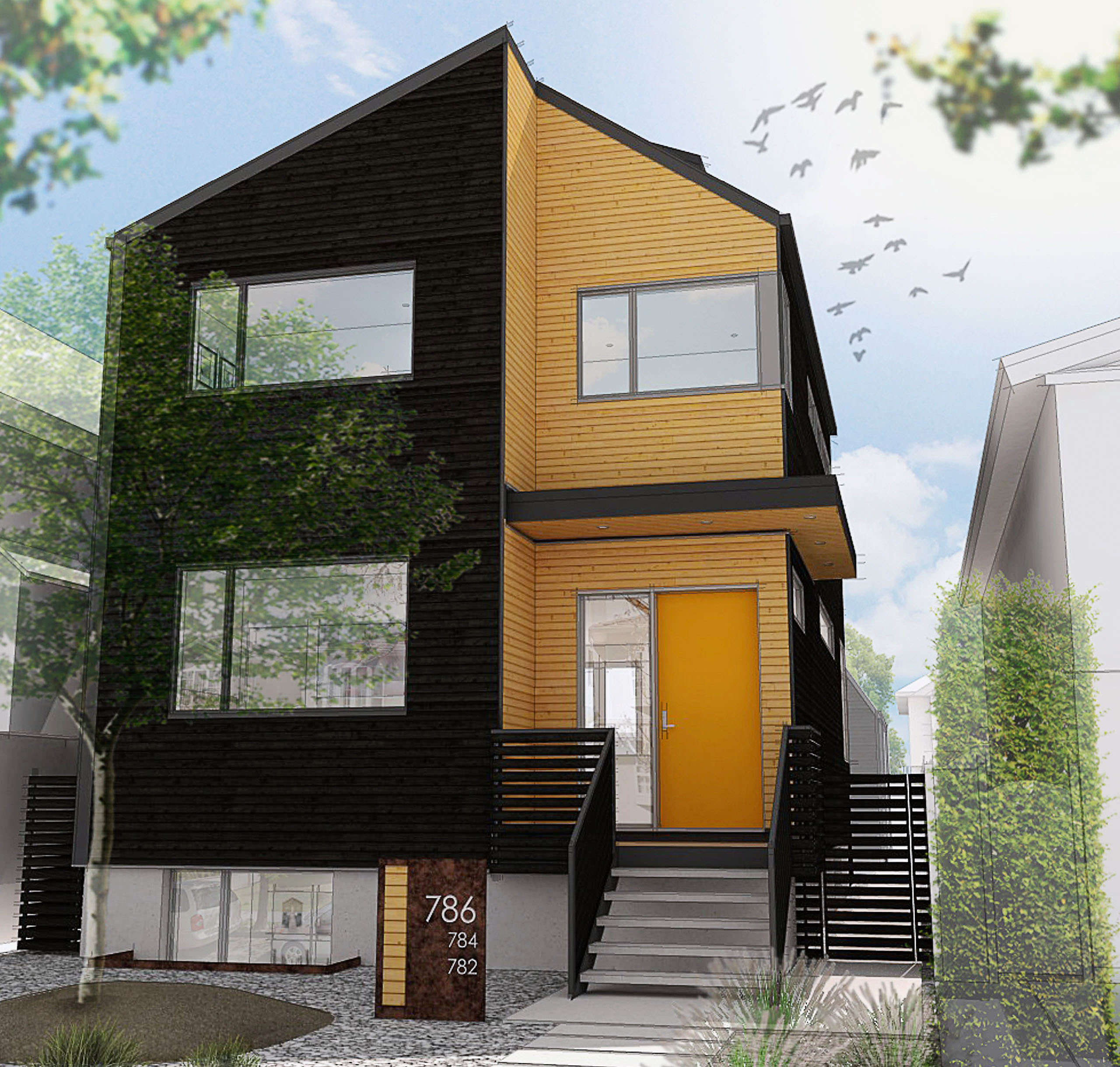 One of Lowe’s current projects, Fraser Ark, is a sleek, modern barn-style house, on the marshy ground of Kensington-Cedar Cottage. On paper, it fits many of the same constraints that make the millennial contemporaries so similar: a towering boxy outline within a standard narrow 33-foot lot, two storeys on top of a semi-basement, and a two-toned wood colour palette. But Fraser Ark has none of the messy, boxy clutter of many new homes—what Lowe calls “throwing materials at the wall and seeing what sticks.” Its simple contrast of light and dark wood cladding is clean, natural, and striking, with uninterrupted vertical lines and a rooftop balcony invoking the prow and deck of a ship. An open living, dining, and kitchen space occupies the rear two-thirds of the main floor, lit by generous picture windows and opening seamlessly onto a rear balcony. Fraser Ark shows that even the standard contemporary Vancouver home, with attention to simplicity and functionality, can be crafted into something more than a cookie-cutter commodity.

Even the standard contemporary Vancouver home, with attention to simplicity and functionality, can be crafted into something more than a cookie-cutter commodity.

Some Vancouver houses that are both simple and beautiful are built under even tighter constraints. Architect David Kominek faced an unusual challenge in the South Cambie neighbourhood, where an anomalous 49.5-foot lot had been subdivided into two tiny 24.75-foot lots—too narrow to line up four king-sized beds between the property lines.

The mirror-image Twins Kominek designed are neither crowded nor cluttered, despite their size. A horizontal stripe of warm wood cladding echoes a low privacy fence that divides the two lots, as well as understated interior wood features that snake through the kitchens and stairwells. The light, elegant symmetry of the Twins transforms a site that could have felt crowded and oppressive, instead making both buildings feel expansive despite their proximity.

What Kominek, Lowe, and Bray all value is the irreplaceable attention to place, purpose, and functionality that separate a home that merely nods to West Coast design and one that embodies it. The tragedy of many modern homes, Bray says, is that owners are unwilling to pay for the work of designers that makes a home more efficient, humane, unique, beautiful—and ultimately more cost effective. No one-size-fits-all plan can match the adaptive and ecological nature of a thoughtfully imagined modern home.

Up on the hillsides north of the Burrard Inlet, the sculptural houses of the West Coast modern masters will continue to inspire. Listed for sale this winter, Starship House, a majestic curl of glass and cedar designed by Arthur Erickson, perches delicately on a rock outcropping overlooking Howe Sound—this is a house written in the unconstrained, free verse of unlimited space and resources.

Down below on the streets of Vancouver, architects such as Bray are writing tight, calculated sonnets to efficiency, personality, and the beauty of simplicity. Homebuilders can escape the humdrum uniformity of the millennium contemporary by following their lead.

Photos by Martin Knowles. Read more from the Winter 2021 issue.