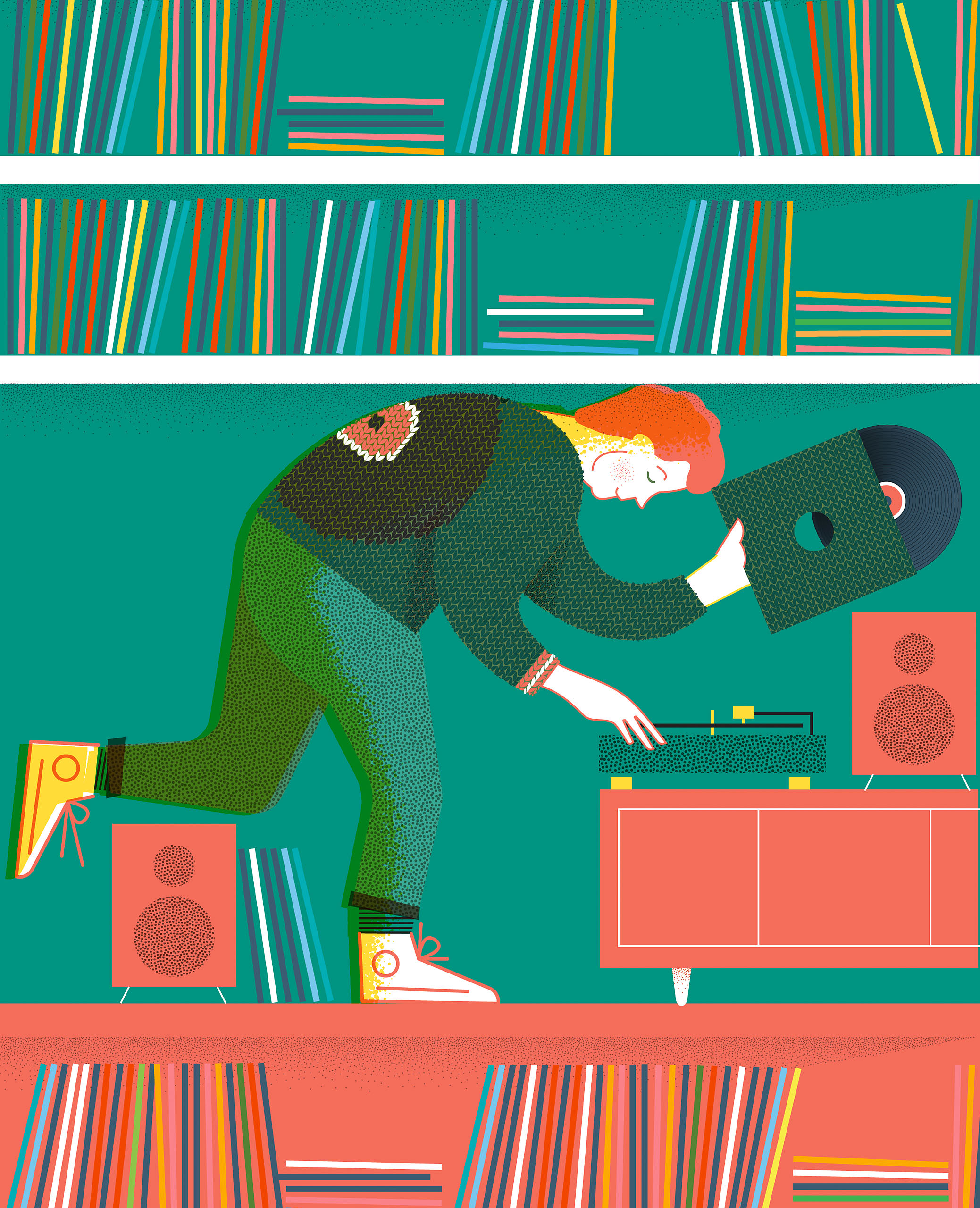 One of Canadian filmmaker Alan Zweig’s favourite moments in his 2021 documentary, Records, about the joys and perils of record collecting, involves a Jamaican named Karl.

Karl recounts how he made an improvised bamboo antenna with a broken bottle on the end, which he would set at the top of a mango tree so he could pick up Miami R&B stations on a bush radio and make lists of records for people to buy him on trips to the U.S.

“That, to me, is a great record-collecting story,” Zweig muses, talking to me by phone. “There are only so many people who climb a tree to make an antenna to get a station far away so they can hear music they won’t otherwise hear—and buy records!”

I didn’t have to climb any trees, but the conditions under which I became a record collector were also born of hardship, albeit a vastly less colourful kind. They made me who I am: someone who can spend hours scrounging in thrift stores and cut-out bins, whose first question on coming to any new town is, “Where are the record stores?”

It started, for me, in 1982, when I was 14 and lived in Maple Ridge with my parents. That was the year I learned about punk rock—already declared dead by some, but it had taken awhile to make it to the burbs. There was no internet, and the rock radio stations we could get wouldn’t touch punk with a stick. But a friend from school, Greg Terry, had introduced me to the Sex Pistols on his bedroom stereo, and I knew I had found the music I wanted to listen to for the rest of my life. The fearless violation of taboo, the savage freedom of self-expression—what kind of music was this?

Greg had read in a magazine, he explained, about this thing called punk rock. It also mentioned the Dead Kennedys and a couple of bands from Vancouver, D.O.A. and the Subhumans. We were looking for their records long before we’d heard their music.

The problem was, no record stores in the suburbs stocked it. You could find Iron Maiden and Black Sabbath records in Maple Ridge, but good luck finding anything independently released, or as dangerous and exciting as a band with a name like Dead Kennedys.

These were the days when teenage thugs cruised the streets in their Camaros, looking for punk kids to beat up for daring to look different. One of the key memories of my childhood was walking home from high school, hair dyed and moussed, a Radio Shack tape deck blasting the Exploited, and having rocks thrown at me by kids in Led Zep and AC/DC shirts who were smoking pot in the park. I would make a joke of it in later life—“I was stoned by stoners!”—but it still kind of hurt my feelings.

These were the days when teenage thugs cruised the streets in their Camaros, looking for punk kids to beat up for daring to look different.

The record store owners didn’t actually assault the punks in my Podunk hometown, but they weren’t that eager for our business, either. Eventually a few major label punk releases would trickle in, like the Lords of the New Church debut LP, which came into Big K Music, a long-gone record store at Haney Place Mall, where the best records were usually in the bargain bin. But Big K didn’t have the Dead Kennedys or D.O.A. and couldn’t even order their albums.

It soon became obvious that to find any of the records I was looking for, I’d have to go to Vancouver—no small feat for a kid too young to drive.

My father had a car, however, and liked to go to Hastings Park to bet on horses. I would endure hours of boredom at the track so we could stop on the way at D&G Collectors Records on Hastings Street across from the Kootenay Bus Loop. That’s where I found my first Dead Kennedys record, In God We Trust, Inc., and a few weeks later, D.O.A.’s live debut EP, Triumph of the Ignoroids—with the uncensored cover and songs like “Want Some Bondage.”

There was also a passenger bus, Pacific Coach Lines, that made a more or less straight shot into the city, taking about an hour each way. But I suffer from motion sickness, and the canned air of that bus line never did agree with me. I remember, on more than one trip, getting off to be sick at the side of the highway, begging the driver to wait so I could get back on and continue my pilgrimage.

As it happened, Pacific Coach Lines let off near Granville and Hastings, two blocks from the first truly important record store of my life, Collectors RPM. In a two-storey building at Seymour and Pender, RPM had a storied owner, Geoff, who, I was told, looked at the shoes of every new customer to get a sense of how much money they might have. RPM had a “Beatles museum” of high-priced memorabilia upstairs, and Geoff would eagerly guide tourists up there.

Dale Wiese—nowadays, proprietor at Vancouver’s Noize To Go, one of the few surviving shops with a direct lineage to the old days—worked for Geoff back then. Phil Saintsbury, who still sells records at swap meets and on Facebook, worked there too, as did Grant Shankaruk—bassist for the Monster Stalkers, last I heard.

Dale, Phil, and Grant are weirdly all still in my life, 40 years later. They would eventually relocate to Track Records, a block or so away in what became Seymour Street’s “record row,” with A&B Sound and later arrivals, including A&A, Odyssey Imports, and Sam the Record Man. But it was really at RPM where I became the collector I am.

Grant was the one I dealt with most, a sincere enthusiast happy to share his knowledge, who occasionally went above and beyond for the weird kid from Maple Ridge. When I couldn’t find Iggy Pop’s New Values anywhere, he made me a tape of it and even threw on a couple of cuts off the Iggy bootleg Heroin Hates You.

There were lots of firsts for me at RPM—bands I still love whose music I first encountered on their shelves. I bought my first Nomeansno EP and my first Slow single at RPM. It was likely where I bought Red Herring’s Taste Tests, Animal Slaves’ Dog Eat Dog, and the Spores’ Schizofungi!—all enduring classics of creative Vancouver music.

It was the paydirt I had been hoping for, and while other stores—Zulu Records, Ty Scammell’s stall at the flea market, or Main Street Records (incongruously on Granville)—also had scores waiting, it was at RPM that my identity as a collector took final form. Even still, it’s hard for me to go two weeks without buying new music.

My parents had grown up in the Depression, which is why they stockpiled food. I grew up in Maple Ridge, and so I stockpile culture.

I’m kind of impressed by my tenacity in those early years. I might have been too dorky, too suburban, and too well taken care of to have street cred as a punk, but by God, I earned those records I bought!

It’s just as well I didn’t have to climb any trees.