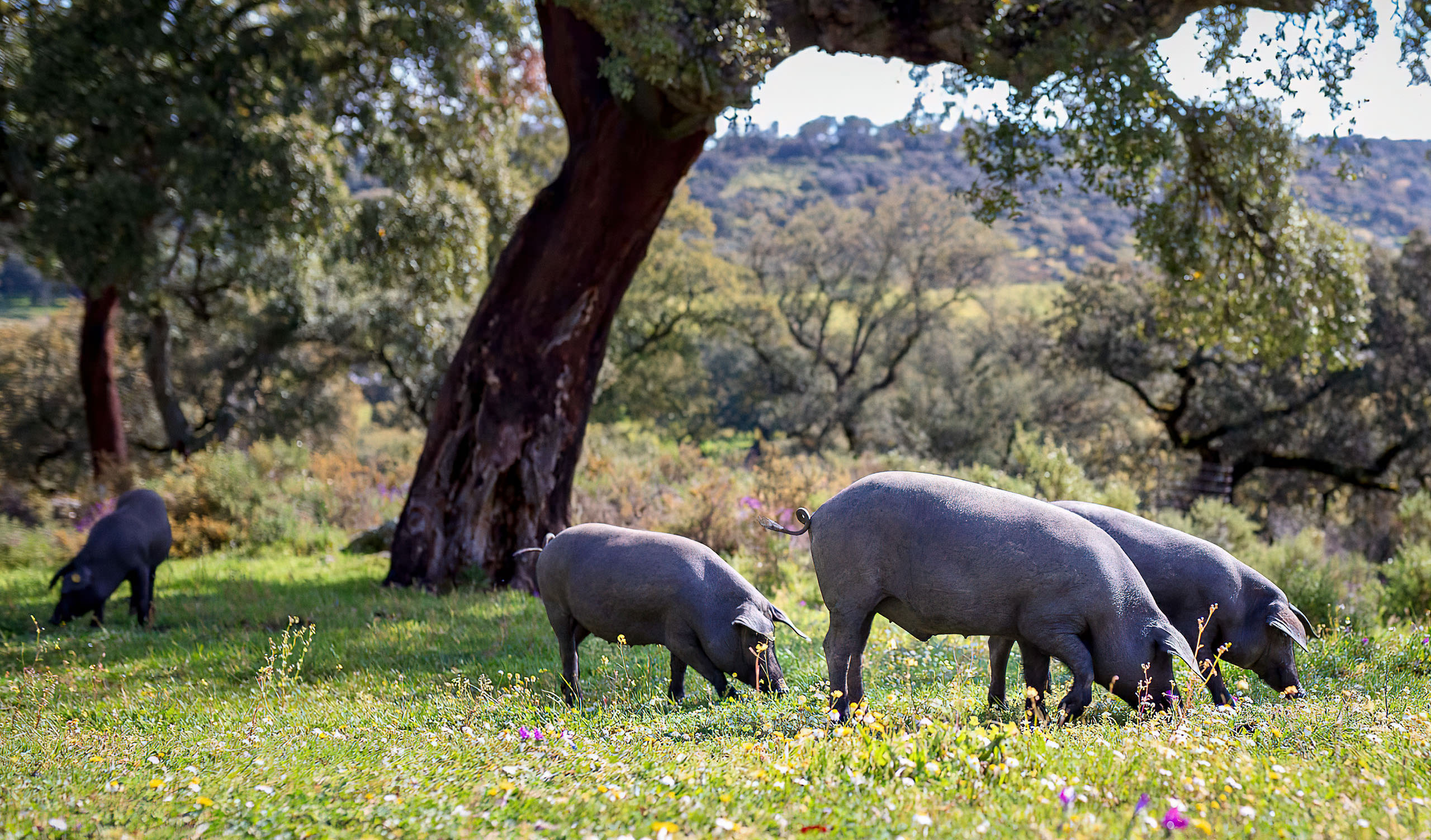 Could there be a more decadent morsel of food?

A hand-carved slice of top-quality ibérico ham topped with a healthy mound of sustainable caviar is placed before me. I roll it up before popping it into my mouth. The deep savouriness of the meat is the first sensation, its delectable fat turning to oil as it hits the roof of my mouth. Then a burst of bright salinity from the caviar cuts through the richness. It’s a pure umami bomb.

Among the panoply of cured Spanish hams, this represents the best of the best: pata negra or ibérico de bellota—words that conjure perfection to charcuterie afficionados. It may be a rainy night in an industrial park in Richmond—home of ARC Iberico Imports—but, as a perfectly carved spiral of jamón is set down and I slide another slice into my mouth, I am magically transported to the warm terroir of southern Spain. 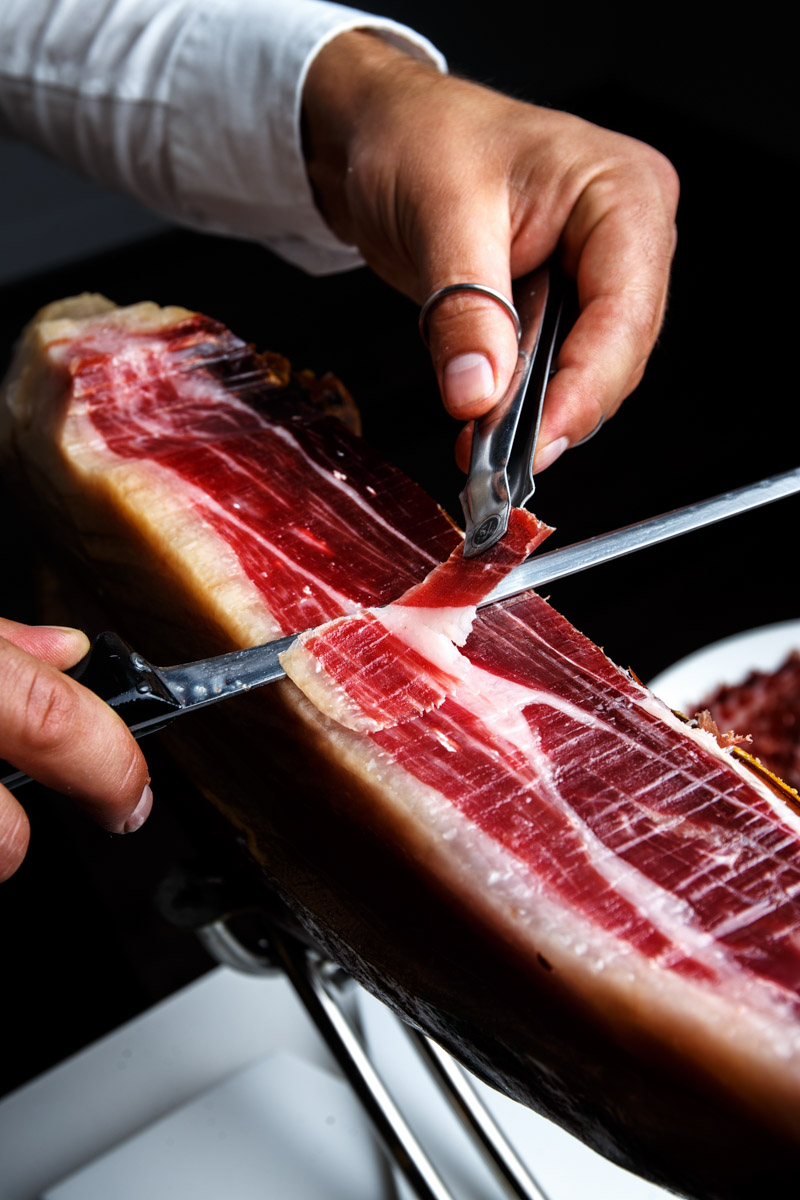 “We are one of the oldest companies in Spain making jamón ibérico—this ham brings with it 150 years of tradition,” says Joseba Castaños, U.S. area manager of famed producer Cinco Jotas. “We have passed the knowledge and jobs down through five generations.”

Cinco Jotas is based in Jabugo—a town in southwestern Spain about 100 kilometres north of Seville—where pata negra is intrinsic to the economy and culture of the local community.

“Jabugo has a population of around 2,500 people, and 90 per cent of them work for the industry,” Castaños notes. “And the most important company in the industry is Cinco Jotas.

“Everyone in Spain knows Cinco Jotas, and when you talk about Jabugo, you are talking about the birthplace of ibérico ham.” 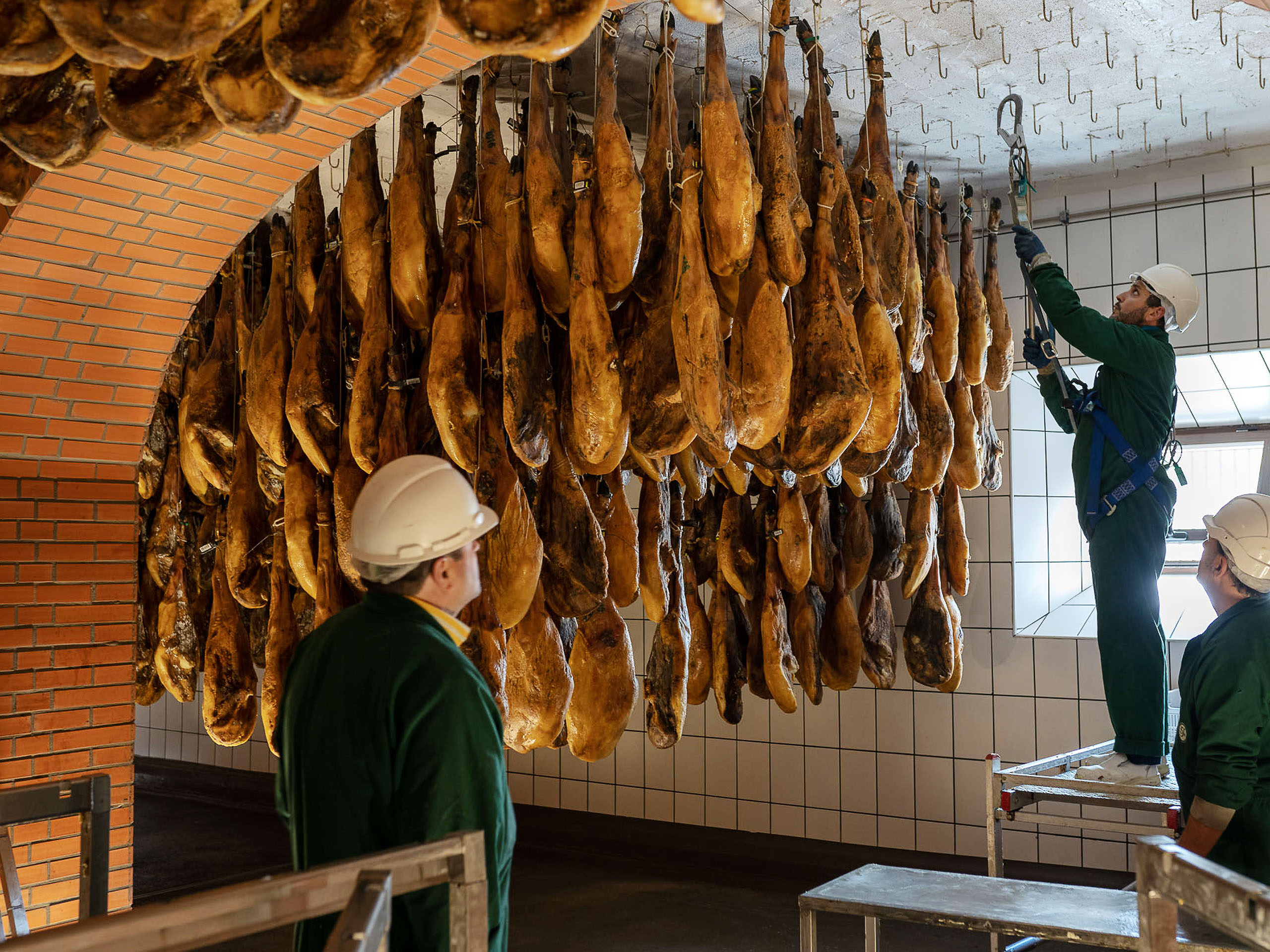 The hams are hung in an underground cellar to dry. The black pata negra pigs are free range, rooting for acorns.

There is good reason for the passion and pride this ham generates, and it starts with the animals and their welfare. The “negra” in pata negra (literally “black leg”) refers to the black hooves of the purebred pigs reared for their prized meat. The pigs—black all over—have a diet that is predominately (but not exclusively, as many believe) acorns. The acorns are not only the flavour enhancer, infusing the ham with its unique and trademark creamy nuttiness, but also the reason the fat is not just delicious but healthy, too.

The pigs, Castaños explains, are reared for two years. They are free range, with each animal given the equivalent of five acres on which to roam. The land is populated with varieties of oak trees that drop their acorns during the rainy season from September to March. During the summer, the animals graze on grass, herbs, and mushrooms, and their diet is supplemented with cereals.

“The pigs need two acorn seasons,” Castaños says. “The second acorn season, during the last four months of their lives, is when the pigs gain the most weight and the nuttiness permeates their flesh.”

The exceptional care continues during the curing of the hams, taking between three and five years depending on the size of the leg, which is initially immersed in salt, losing half its weight in the process. Next, it is hung in an underground cellar and then gradually moved up through more floors, until the final drying at ground level.

The exceptional care continues during the curing of the hams, taking between three and five years, depending on the size of the leg.

This is painstaking work—a labour of love that cannot be rushed or expanded upon. There are pata negra pigs produced to different standards, including those that use breeds crossed with regular white pigs, have less space to roam outdoors, and eat a lower percentage of acorns. The quality of the jamón is noted by a colour-coded labelling system, which begins at white, then increases a step in quality through green and red, ending with black—the best of the best, including that produced by Cinco Jotas. 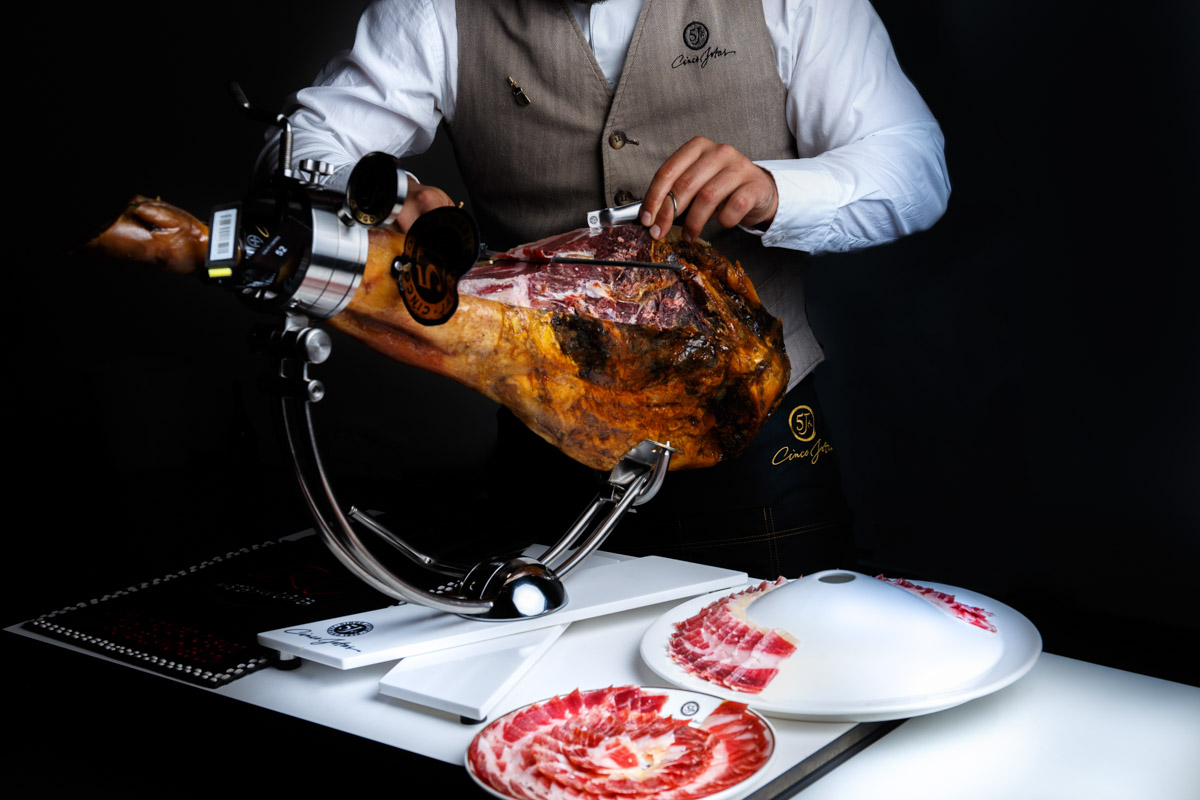 Only 200 Cinco Jotas hams are brought each year into Canada, and ARC Iberico Imports is the authorized importer. Owner Antonio Romero Casado is a master ham carver—the only one in North America. There is no formal qualification process, but it is a title bestowed on those who typically carve 300–400 whole legs per year, skillfully removing every last shard of precious meat from the bone and able to present the jamón in stunning displays. Practice makes perfect. He started the company with just a small section of the warehouse, importing his favourite olive oil and a selection of the best conservas (canned seafood), among other Spanish delicacies. A year ago, he expanded, opening a retail space. This past summer, he added a patio with a liquor licence, and next he plans to open a tasting room to host events, ham-carving classes, and more. He also offers on-site carving services for private parties, weddings, and other events.

“We want to be in the best restaurants in Vancouver, in Toronto, and Montreal,” he says. He currently supplies Boulevard, Elisa, Bodega on Main, and Acquafarina in Vancouver, the new Versante Hotel in Richmond, and Bar Oso and Bearfoot Bistro in Whistler.

“We are a small company,” he shrugs and smiles. “But our goal is to bring the best of Spain to Canada.”