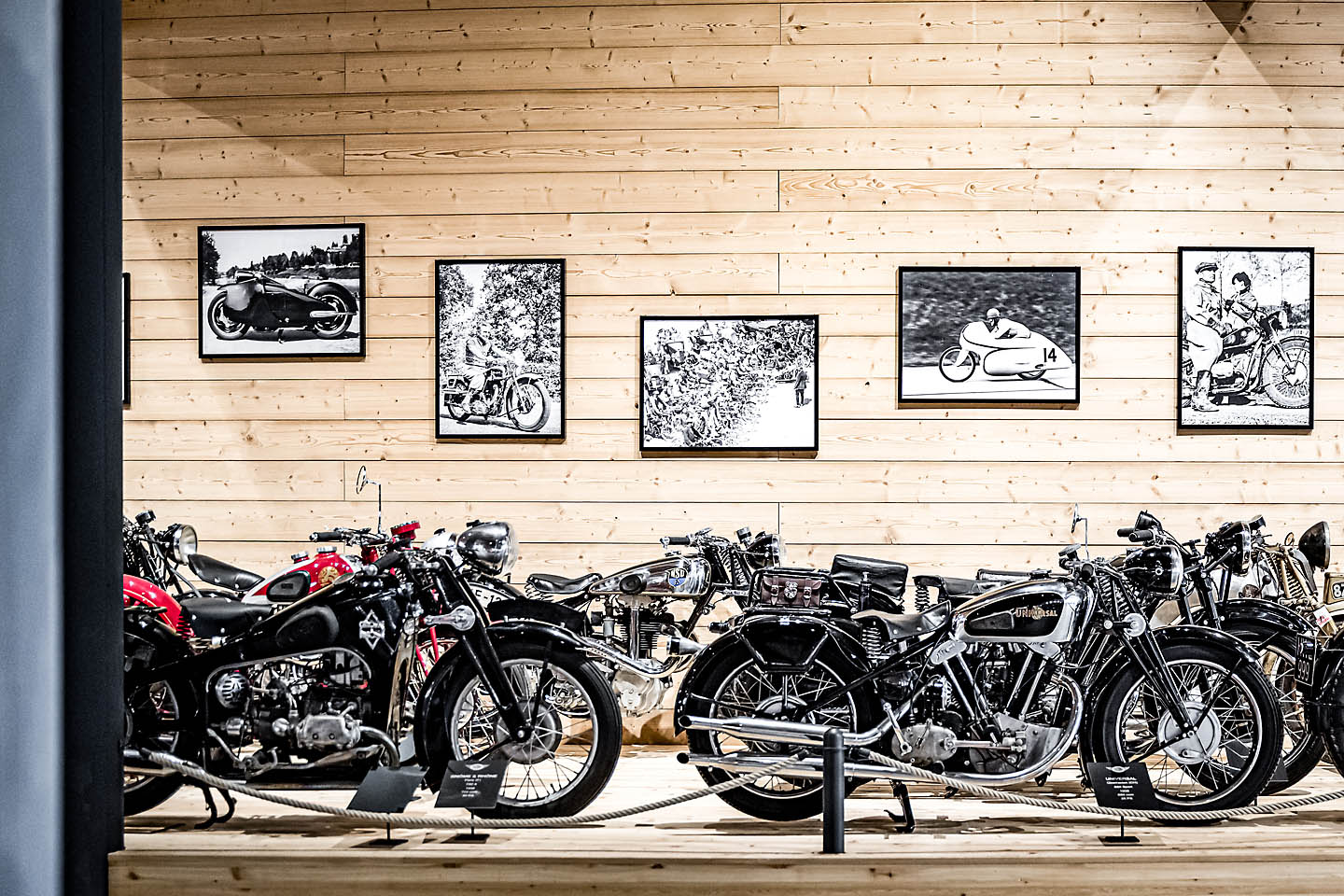 I have never walked through a museum in ski boots before, but here, in winter, they are pretty much standard. I’m in Austria, at the Top Mountain Motorcycle Museum, some 2,175 metres above sea level, to meet co-owner and curator Attila Scheiber.

Attila and his twin brother, Alban, were born in 1967, just 10 minutes apart (Alban is the eldest). They have collected iconic and rare motorcycles and vintage vehicles for decades. They are hoteliers, ski school and mountain lift operators, restaurateurs, museum owners—and to top it all, they own a section of the Timmelsjoch High Alpine Road, a private 33-kilometre tollway famous for motorcycling (theirs is the section between Hochgurgl and the Austro-Italian border).

The road leads through the spectacular glacier landscape of the Ötztal Valley, across the border and down the other side to the thermal town of Merano in Italy 2,000 vertical metres below. The journey by motorbike from Hochgurgl to Merano takes approximately an hour and a half and covers 60 kilometres.

“I built this place for the bikers, as the main attraction is the road—well, and for myself,” Attila tells me. Up here, it’s not about speed but enjoying the road and views, he says. If you need speed, then ride on the autobahn. 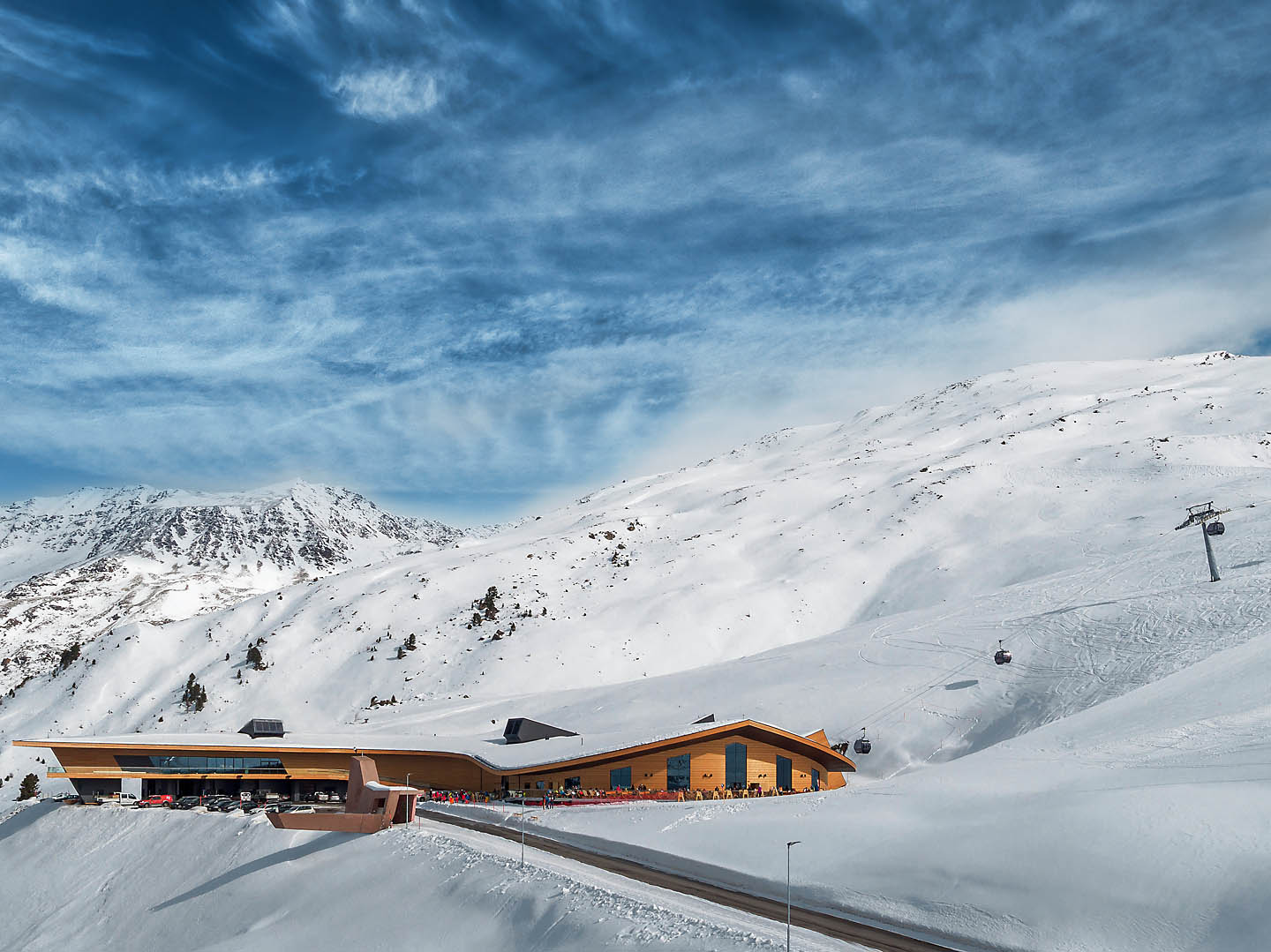 As I enter the museum’s main exhibition hall, I am confronted with a dazzling display of old and contemporary motorcycles in every shape and colour, spanning more than 100 years. The permanent collection includes brands such as BMW, Brough Superior, DKW, Ducati, Harley-Davidson, Henderson, Honda, Indian, Moto Guzzi, MV Agusta, Norton, NSU, Sunbeam, Triumph, Vincent, and Zündapp.

During the winter, ski boots are encouraged in the museum. After all, the building is right on a slope, along with the state-of-the-art Kirchenkar Mountain Gondola, which services the popular resort of Hochgurgl in the Austrian Tyrol, a chocolate-box-chic hamlet about an hour from Innsbruck. The multifunctional Top Mountain Crosspoint complex also has a beautiful and spacious restaurant and bar, with some thrilling alpine views.

Made from concrete, steel, and timber, the modern museum is pristine, rebuilt after disaster struck in January 2021. A fierce blaze engulfed the original building (constructed in 2015), destroying 352 of the 410 motorbikes in the collection, including irreplaceable historic and modern models, some owned by Attila and Alban, others on loan from international collectors. It was a huge loss to the brothers—and to the international motorcycle community. The gondola was untouched, as was the restaurant, alongside a handful of motorcycles. Fortunately, the fire was at night and there were no injuries.

“The only bikes that survived were the USA-made Indian motorcycles on the ground floor, because they were in a separate exhibition space, and the floor, walls, and ceiling were made of concrete,” Attila explains. His favourite motorcycle burned in the fire. “The Brough Superior SS100, such a fast bike from 1939, and I loved to ride it,” he recalls, adding that he will buy another Brough, or an MV Agusta 750S, when he finds one, but they have become very expensive. “My 1948 Indian bagger survived, and I love that bike,” he says. “It rides well, powerful and loud. It has a lifting system, and the whole bike is bespoke, with an image of the museum engraved on the fuel tank.” 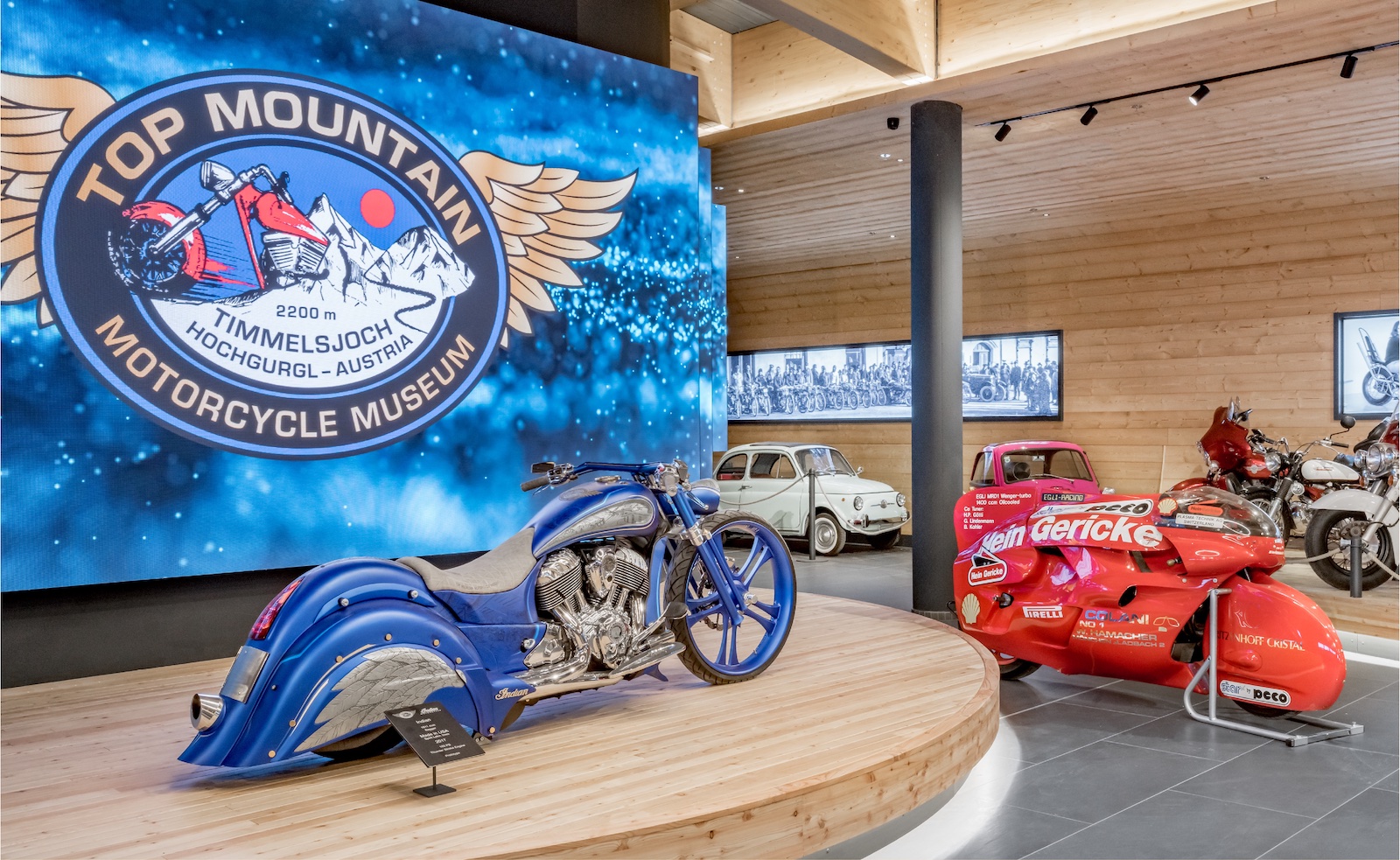 A love of the road and fast cars runs deep in the veins of Attila and Alban. “We started on bikes early because we were in a ski area, and it was easier to get around on a trial bike in the mountains,” Attila says. “My first bike I had at six years old, and my first motocross was at eight years old. The love is old, from the beginning of my life.” The twins raced each other but never professionally. “My parents didn’t want that, but I did compete with my twin brother all the time to see who could climb the steepest hill, things like that.”

Attila’s most cherished hobby is riding his old motorcycles. “I want to ride all motorcycles around the world,” he says. He rides with friends for fun, to Spain and the Netherlands, but they never know how far they might get so they keep a backup bike and a mechanic on hand.

Before the fire, Attila had already planned to expand the museum with interactive exhibitions. “It’s very sad. The 350 or so bikes have gone, but there is a benefit from rebuilding because it is bigger, better, and more people know about it now because of the fire.”

The original museum was a huge success, so a month later, with international supporters convincing him to rebuild, Attila and his brother decided to go ahead. They assessed the damage, and their partners, firms, and collectors gave them the security to complete construction by the end of 2021. “I said to my wife, ‘Nobody will give us a motorcycle again,’ but I was totally wrong,” he admits. “It was the opposite.” 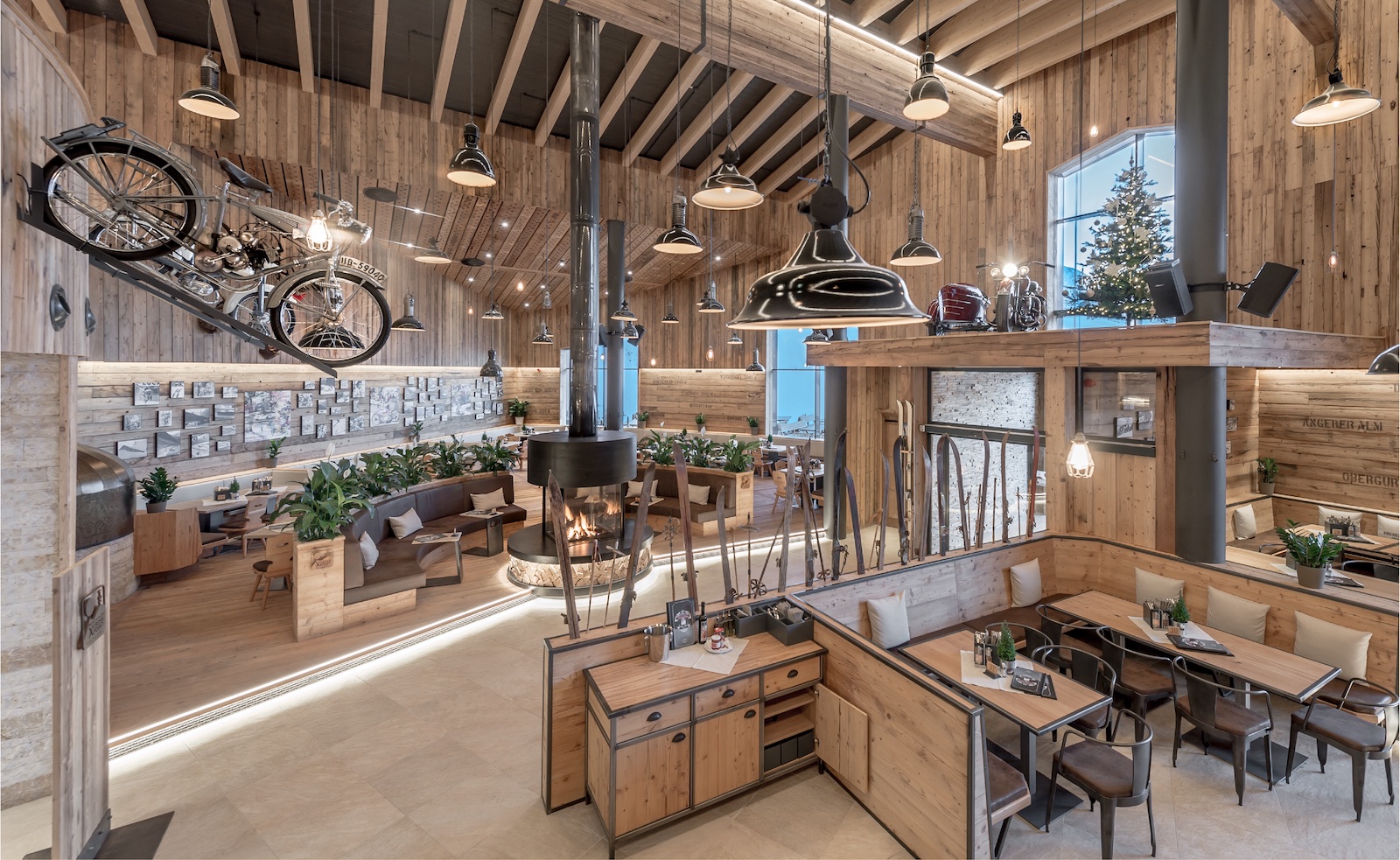 In fact, they were offered so many bikes that they decided to make the museum bigger. It now has 4,500 square metres of floor space exhibiting 520 bikes from around the world, as well as 20–30 interesting and collectible cars.

They used the same architect as for the previous building and started construction in August 2021. Attila and the architect visited the Barber Vintage Motorsports Museum in Birmingham, Alabama, the biggest in the world, to get a few ideas for their own museum. “It’s a great museum, but you can’t compare the quality with European museums. Many journalists have said ours is the best motorcycle museum in Europe.”

Exactly 10 months after the devastating fire, the museum celebrated its rapid reconstruction and reopening on November 18, 2021. During the early summer months of 2022, the museum was receiving 600 visitors a day. Since its reopening, it has seen 60,000 visitors, which is 20,000 more than the year before the fire.

Part of the new exhibition is an interactive 4D element. The brothers want to bring people into the museum who have no motorcycle experience so they can feel what it is like. I mount a huge static bike in my ski boots, the room lights dim, and I am soon motoring along the Timmelsjoch High Alpine Road, displayed in front of me on a giant screen, feeling every twist and turn as the bike accelerates and then brakes, leaning into every corner. It is exhilarating and leaves me wanting more—to try the real thing.