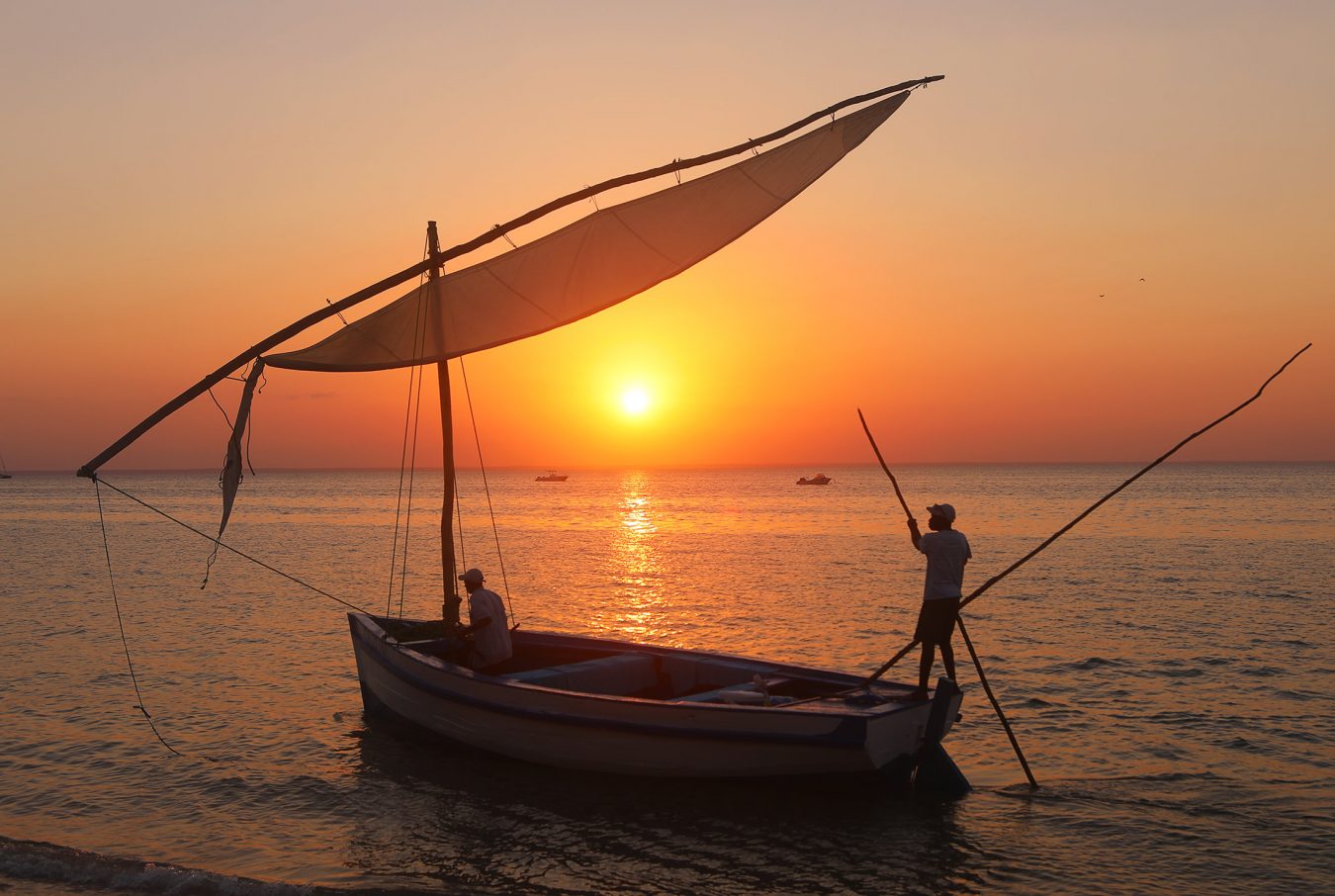 “If you are charged by an elephant, you must run and throw off your clothes,” says Jonito Timbane, recalling how he escaped an enraged tusker by stripping as he fled through the bush. Timbane is trainee manager at Anvil Bay, an upscale beach camp that seems to extend from the coastal forest at Ponta Chemucane on the fringe of Mozambique’s Maputo Special Reserve.

We are swapping tales over dinner, our table a sliced tree trunk atop the sand. “This is unspoiled, frontier-experience Africa,” adds Dave Wylie, the property’s burly South African manager, as we dine on a gourmet meal of Swaziland beef steak, Greek salad, roasted potatoes, and fresh-caught crabs, prepared by our jovial local chef, Julio Ngora.

Recently devastated by a civil war that decimated its wildlife, Mozambique struggles to compete in the big-stakes safari game. Not least, lodges are few and far between—Anvil Bay, the first and only in the region, opened softly in 2015 as a community project staffed by locals, who were trained at the South African College for Tourism. And Maputo Special Reserve still has no rhinos. No lions, nor leopards, nor cheetahs. All were poached or killed during the brutal 1977 to 1992 bloodbath.

While efforts to re-inhabit the national parks with Big Five game are a work in progress, the ecologically-enlightened nation excels in marine park conservation. Pristine coral reefs teem with colourful fish. Pods of dolphins ride the surf. Whale sharks forage the Mozambique Channel. And the stillness may be broken by the splash of whales breaching offshore. Plus, the country’s coastline is studded with islands haloed by jaw-droppingly beautiful beaches with some of the most sophisticated honeypots of indulgence in Africa, promising a resort experience to rival the Maldives and Mauritius.

Although tranquil now for three decades, Mozambique is, nonetheless, still off the radar of most North American travellers. 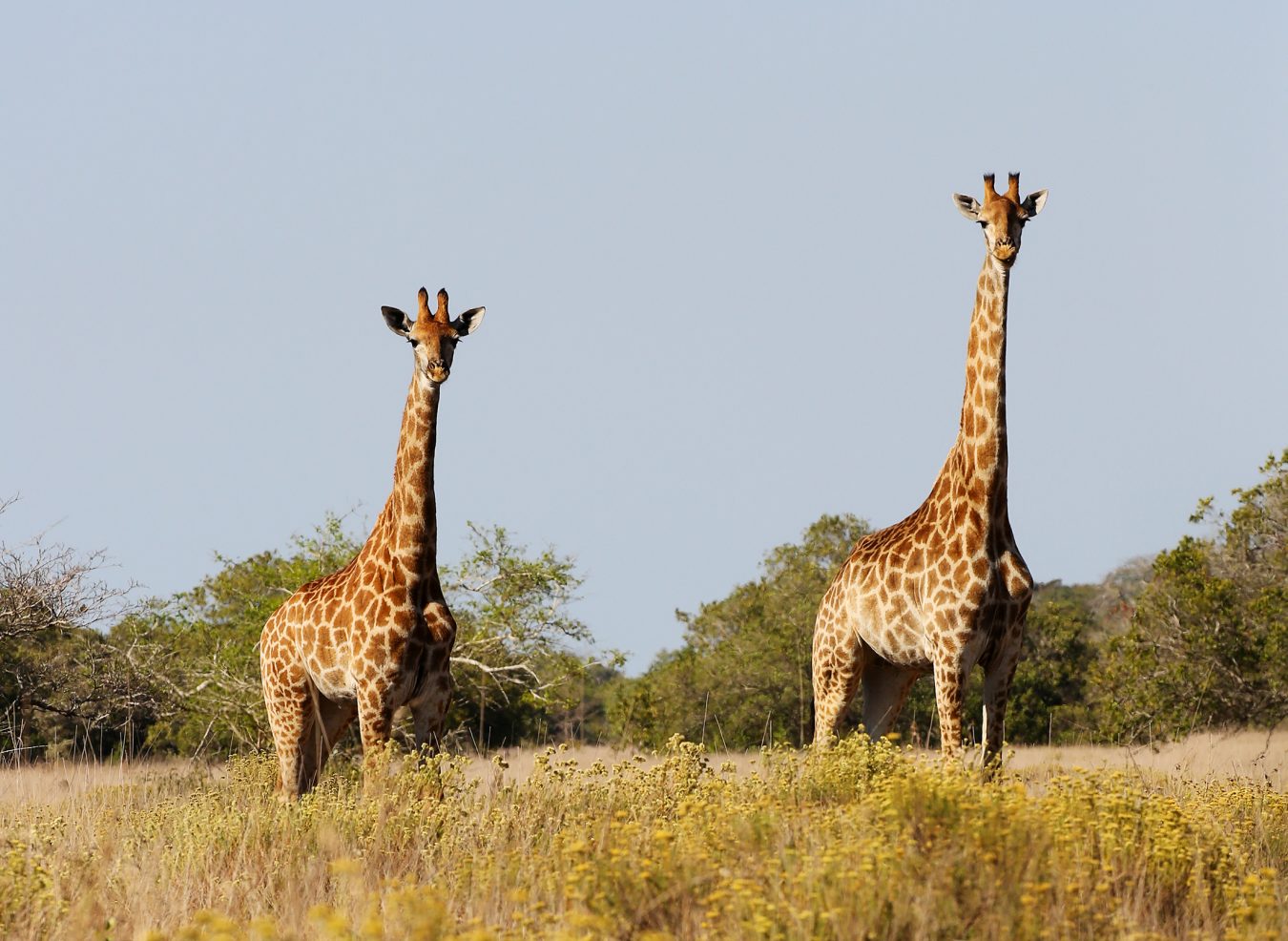 Barely a 60-minute drive south from Maputo, the capital, 1,040-square-kilometre Maputo Special Reserve is as off-the-map a destination as I can imagine. In my three days here, I only see four other vehicles. But not for lack of game.

Just five minutes into the park, a herd of gazelles bounds across our path. Then a tower of five giraffes emerges languorously from the thorny scrub. We stop, and I approach on foot through the grass (there’s a benefit to no predators) until they turn and lope off in gaiting strides.

Two hours into our visit, we arrive at Lagoa Chingute. A yellow-billed stork, colourful as a crayon, patrols the shore. Hippos wallow 50 metres from shore, their metallic honks echoing across the still water like church bells being tolled.

Then a hippo emerges some 100 metres away and begins playing in the foam at the water’s edge. I grab my camera and, screened by reeds, approach unseen for a close-up shot. But the hippo gets wind of me, spins to face me, and flings wide its jaws. Two logs, innocuous amid the lakeside flotsam, suddenly rise on four legs and slither into the gunmetal lake. Nile crocodiles. 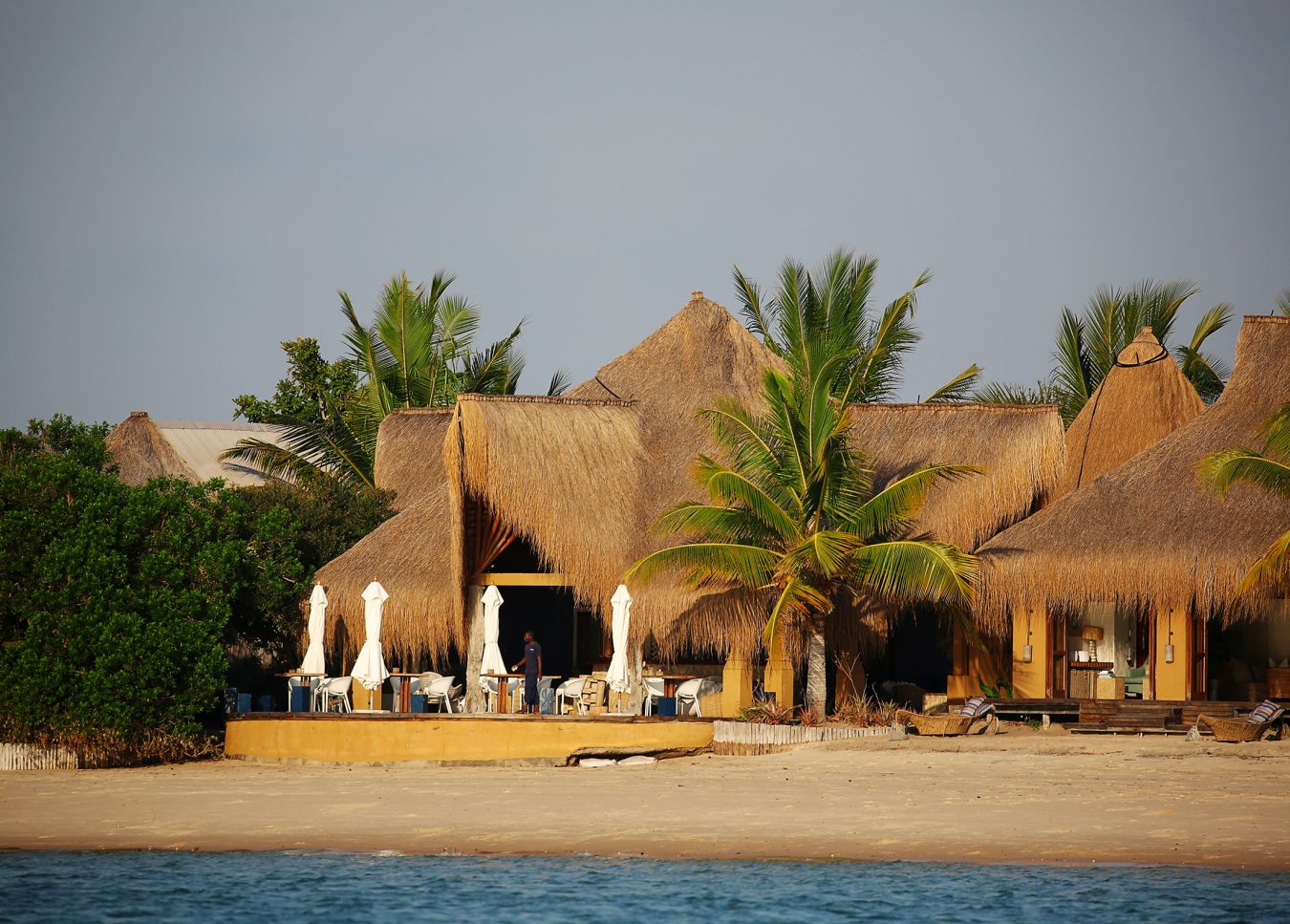 Adrenaline fuels my rapid retreat, with frequent views over my shoulder. I see elephants, too. Dark blobs, half-hidden amid a vast seasonally-flooded plain of lime-green grass that rises to their shoulders. A close encounter, indeed.

Approaching Anvil Bay, we pass what looks like a dark black boulder. It stirs at the sound of our vehicle, then raises its head, trunk in the air. We stop. I jump down—photographer’s instinct—and start shooting. The elephant rises, waves its ears, trumpets loudly, then charges. I turn tail, my heart once again beating madly.

“You were lucky,” says Wylie at dinner that night. “People come here thinking it’s like Kruger [National Park], and that elephants will react as if humans are part of the landscape. They were traumatized during the civil war. They have long memories. Here, when they come at you, they come at you.” He pauses. “In time, MSR [Maputo Special Reserve] will be spoiled as a genuine safari experience. You’re privileged to enjoy it while it’s still raw.”

My log-and-canvas casinha stands atop a stilt platform within the coastal forest, its thatch roof peeking over the treetops. I lay on a sumptuous king bed until the lullaby of the wind and the waves soothes me to sleep. 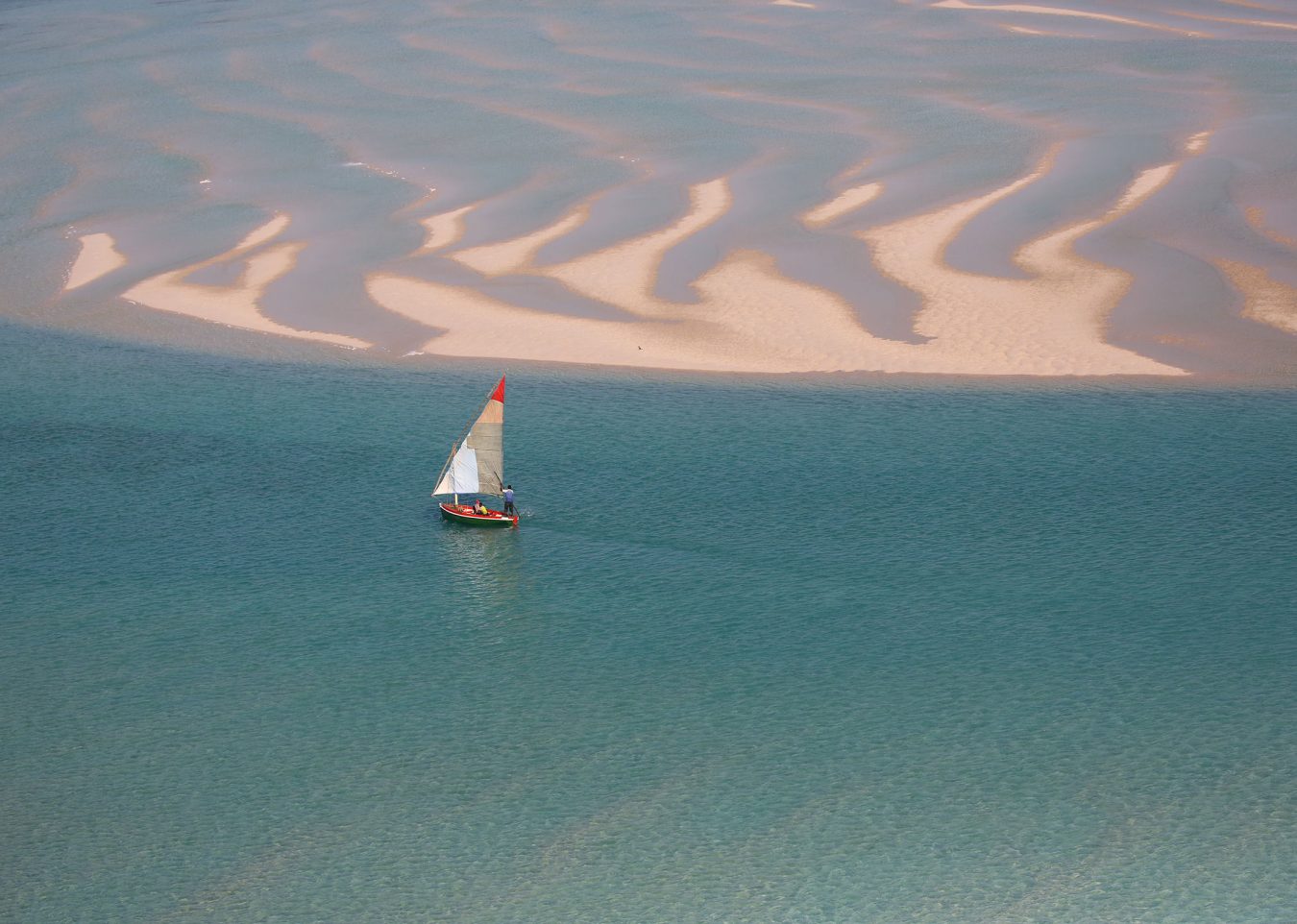 “Look, a manta ray!” my helicopter pilot exclaims over the intercom as we zip above the teal Mozambique Channel, swirled with sandy shoals the colour of Valspar Perfection. Traditional dhows—ancient hold-overs of when this coast was a precious dominion of Arab slave, ivory, and pearl traders—ply the channels, their pointy sails slicing the shallows like shark fins.

My après-safari wind-down destination comes into view: Azura Benguerra resort, in the Bazaruto Archipelago—a cluster of tiny islands a mere 75-minute flight via the town of Vilanculos from Maputo.

As I step from the chopper, a beaming concierge offers me a chilled handcloth and a fruit cocktail. He welcomes me into the stone-and-thatch lodge, earthily African in inspiration, with the open lobby framing the still-as-glass ocean beyond. The silence is absolute but for the giggles of local women clad in colourful sarongs, carrying fish freshly purchased from dhows careened on the nearby beach. 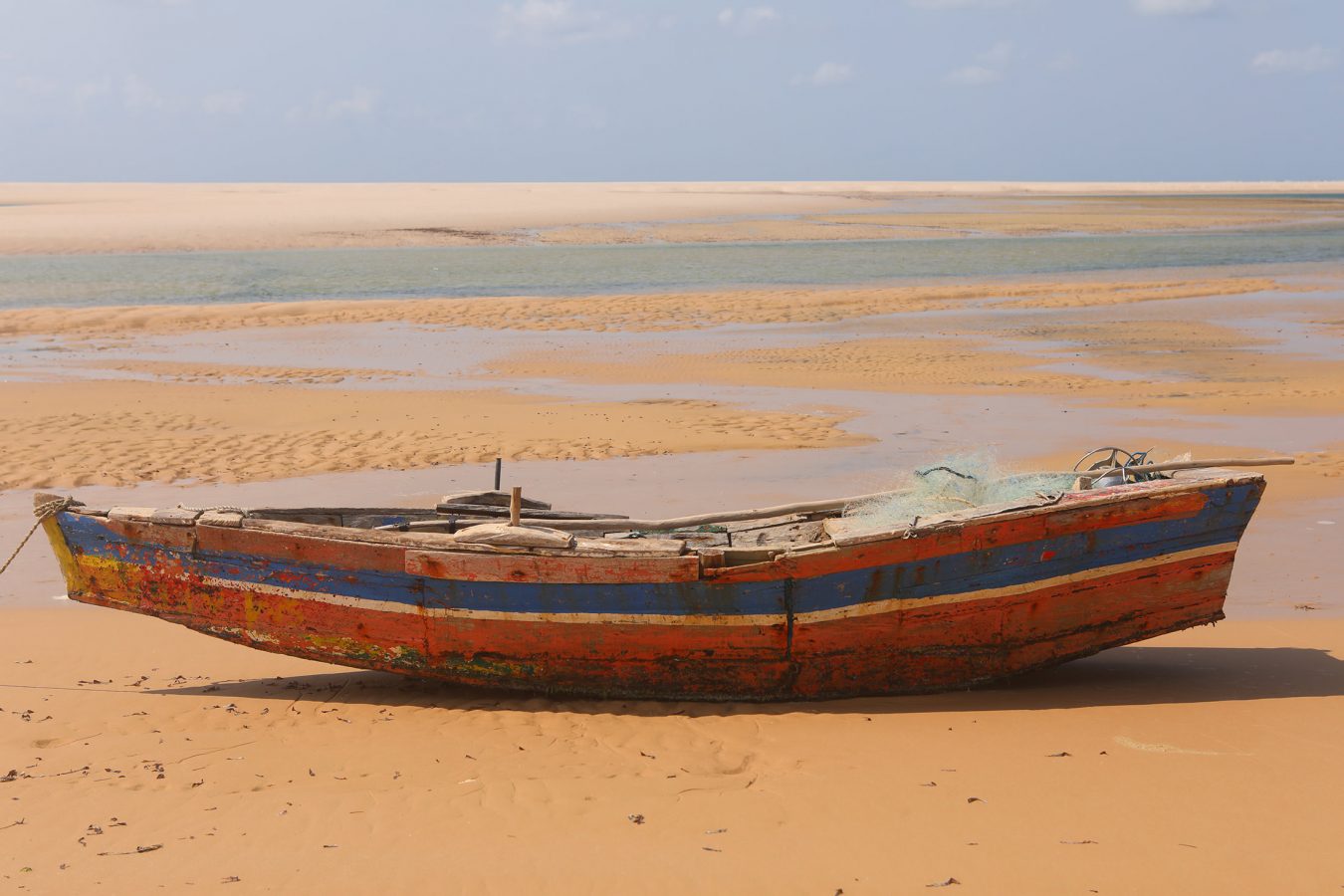 There are no paved roads on Benguerra. Just primitive tracks connecting hamlets of conical huts. But beach-chic Azura Benguerra is a luxurious love-nest, with 20 thoroughly romantic thatched seafront villas, rose-petal-strewn king beds, and torch-lit gourmet dinners on the sand.

I explore Bazaruto Archipelago National Park on the resort’s Island Hop safari. On Bazaruto Island, I climb huge dunes spilling into the Indian Ocean, with flats speckled pink in season by flocks of flamingos; then I speed to a pristine offshore reef to snorkel in crystal waters teeming with parrotfish, Moorish idols, and blackspotted sweetlips so close I can almost kiss them.

As the helicopter whisks me back to Vilanculos, I realize I have fallen in love with Mozambique’s raw, unfiltered charm. This is an African experience found nowhere else.

This article from our archives was originally published in our Spring 2018 issue. Read more Travel stories.