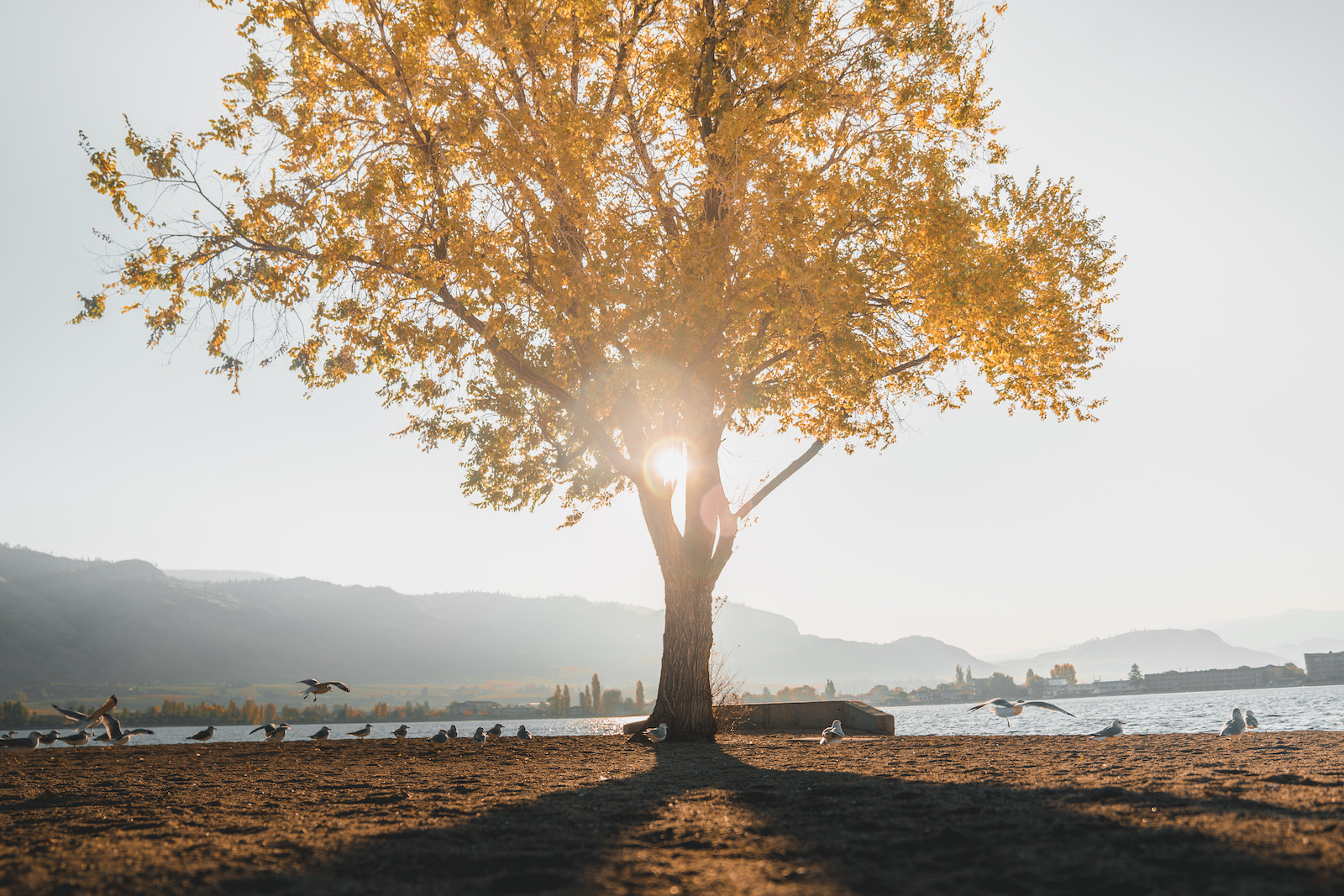 Jack gives a gentle flick of his head as we clip-clop up the trail through the desert-like grassland. It’s fall in Osoyoos—the sumac leaves have turned a brilliant red, and Saskatoon berry bushes (a cornerstone of the local Okanagan Nation’s diet) dot the arid hillsides with swaths of yellow.

As Jack and I crest a ridge, my hand brushes the soft tips of the abundant silver sagebrush lining our path, their soothing fragrance permeating the air.

Only yesterday, the rabbitbrush bloomed yellow here as well, our horseback riding guide, Sherry Zarowny tells us, their beauty worth the annoyance of her seasonal allergies. Pockets of scraggly, resilient, dark-green antelope brush add a distinctly South Okanagan touch to the shrubland, one of few remaining homes to this rich yet endangered ecosystem.

Often described as Canada’s only pocket desert, Osoyoos is actually more accurately termed a semidesert, though its rugged shrub-steppe terrain certainly hosts desert-like features similar to more arid spots south of the border, such as Phoenix, Arizona. Fundamentally the area sees too much rain and occasional snow to fully merit the designation, but that same precipitation can be thanked for its plentiful vineyards and orchards. The unique climate is home to a biodiverse habitat of increasingly rare desert-dwelling plant and bird species and even celebrates a protected rattlesnake population that we thankfully don’t run into. 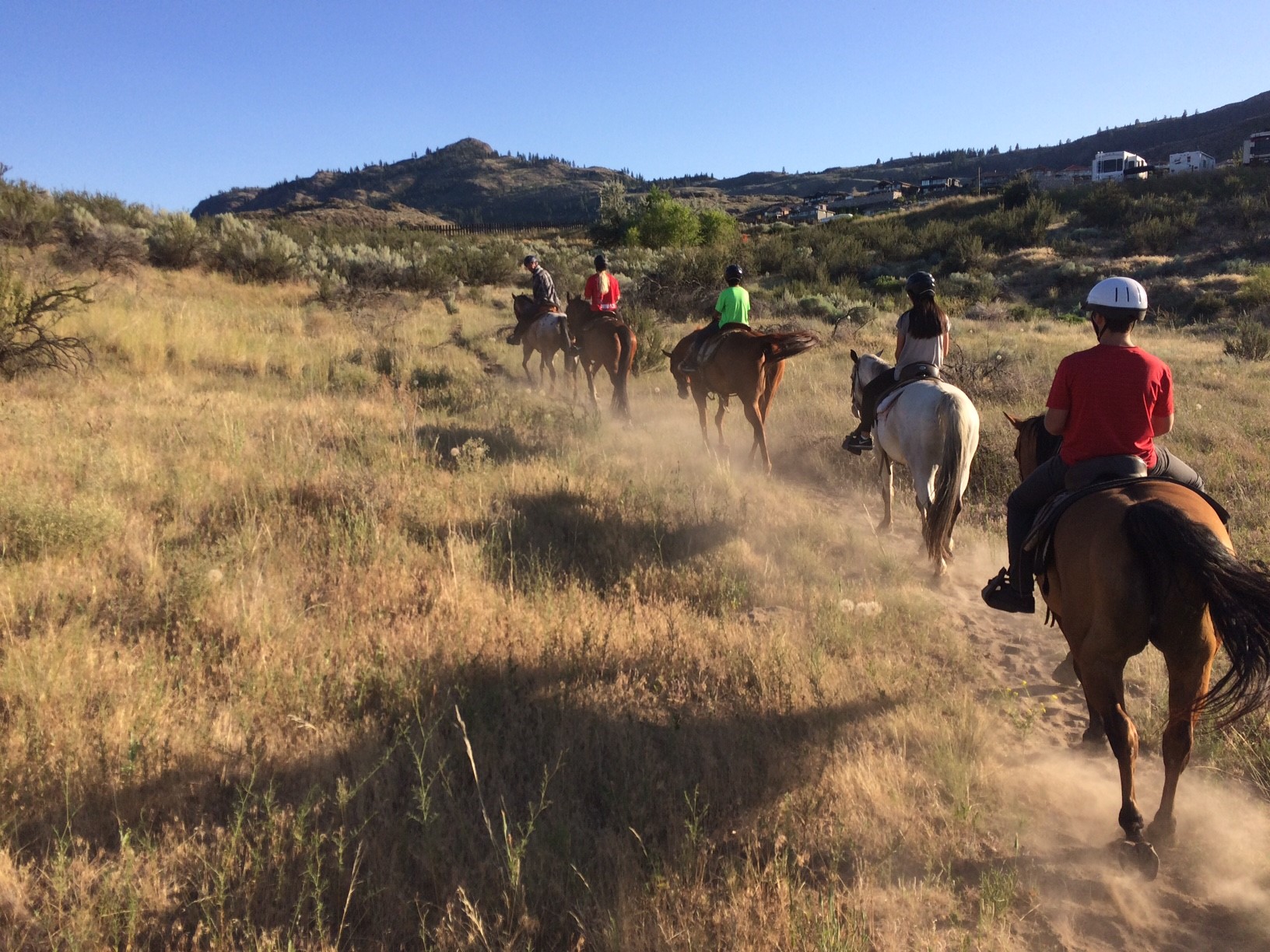 Jack pauses patiently at the top of the ridge so I can savour the full vista. From here, I can see the lush, green vineyards spread out below us, surrounded by rolling, dry hillsides. Osoyoos Lake, considered one of the warmest freshwater lakes in Canada, stretches off in the distance, under a clear blue sky. I can almost see our cozy little home on wheels, courtesy of CanaDream RV, nestled beneath the willow trees on its shore.

Zarowny points out the tiny, brittle cactus that Jack inexplicably likes to munch, and I give a light tug on the reins to dissuade him before tweezers are needed to remove the spiky quills from his snout. Like most of his equine colleagues at Sun Hills Riding Centre, Jack is a rescue horse. When his owner surrendered him in 2018, he was introverted, poorly nourished, and needed some serious hoof care. After just one winter with Zarowny and her husband, Dave McGlynn, the 19-year-old quarter horse flourished, and has even found love with a standardbred named Walter.

Here, all the horses are lovingly tended by McGlynn— and Zarowny, who is also training as an Equine Professional to help therapists and their clients find comfort with horses. She has a knack for putting both people and animals at ease. 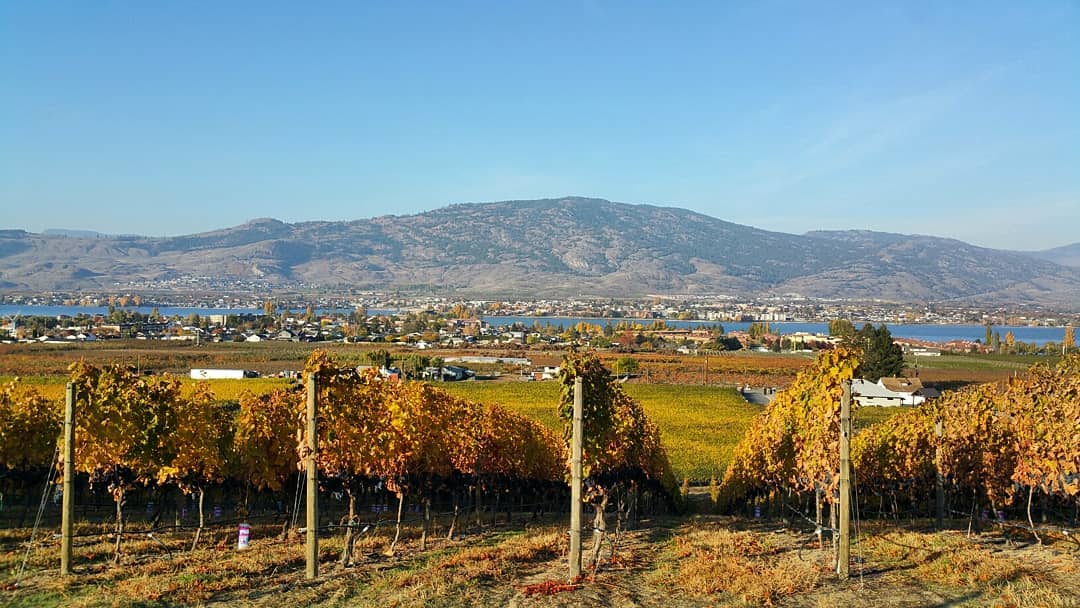 There’s Mick, who was neglected and scheduled to be auctioned for slaughter, and Roy who was roughly handled and understandably fearful. Today, they are all in good health and shielded from painful accessories such as bits and metal horseshoes (they wear rubber horse booties on the trails and go shoeless in the corral).

As we continue to  meander up the hillside, I find myself taking deep breaths and relaxing into the saddle. It’s a soothing way to spend a sunny Saturday morning in late September, a welcome respite from the COVID anxiety that’s dogged me these past months.

We pass an abandoned gold mine, then slowly begin to trek back toward the corral as I surrender fully to Jack’s steady pace. Back at the riding centre, I stroke the bay’s black mane, and he meets my eyes, accepting the carrot I’ve proffered along with my gratitude.

The next day, I’m back in a saddle of a different sort, as Max Barclay from South Okanagan E-Bike Safaris takes my partner and me through the quiet backstreets of Osoyoos on his fleet of smooth, high-end, German-made electric bikes. 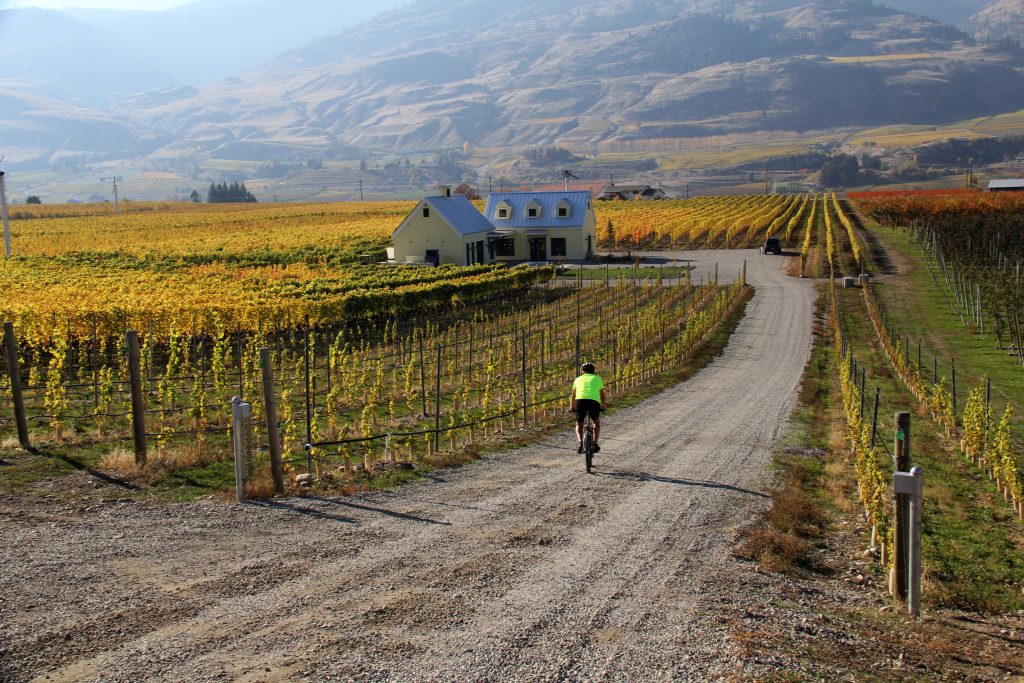 A natural storyteller, Barclay pauses frequently to share tales of the land and its history, as we wind our way out of town and along the vineyards, where row after row of plump, purple grapes dangle, just waiting to be harvested.

He points out the region’s circuit of lakes and some of the old stations left over from the Kettle Valley Railway, as well as colourful local mountains in the Monashee range; Anarchist Mountain, for instance, is named for the unconventional political views of an early postmaster in a nearby town. He teaches us the correct pronunciation of Osoyoos—the opening “O,” tacked on by settlers, should be silent, he says. For the Syilx people of the Okanagan, souyoos refers to a narrow waterway where land almost meets, I later confirm at the award-winning Nk’Mip Desert Cultural Centre run by the Osoyoos Indian Band.

As we pedal up a handful of hills toward the first winery on our countryside tour, I marvel at the E-bike’s effortless turbo boost and wonder why I’m only now trying this miraculous invention. We linger on the patio for a tasting at Young & Wyse, and unlike my last biking trip through the hillier Central Okanagan several years ago, I’m neither drenched in sweat nor gasping for breath. 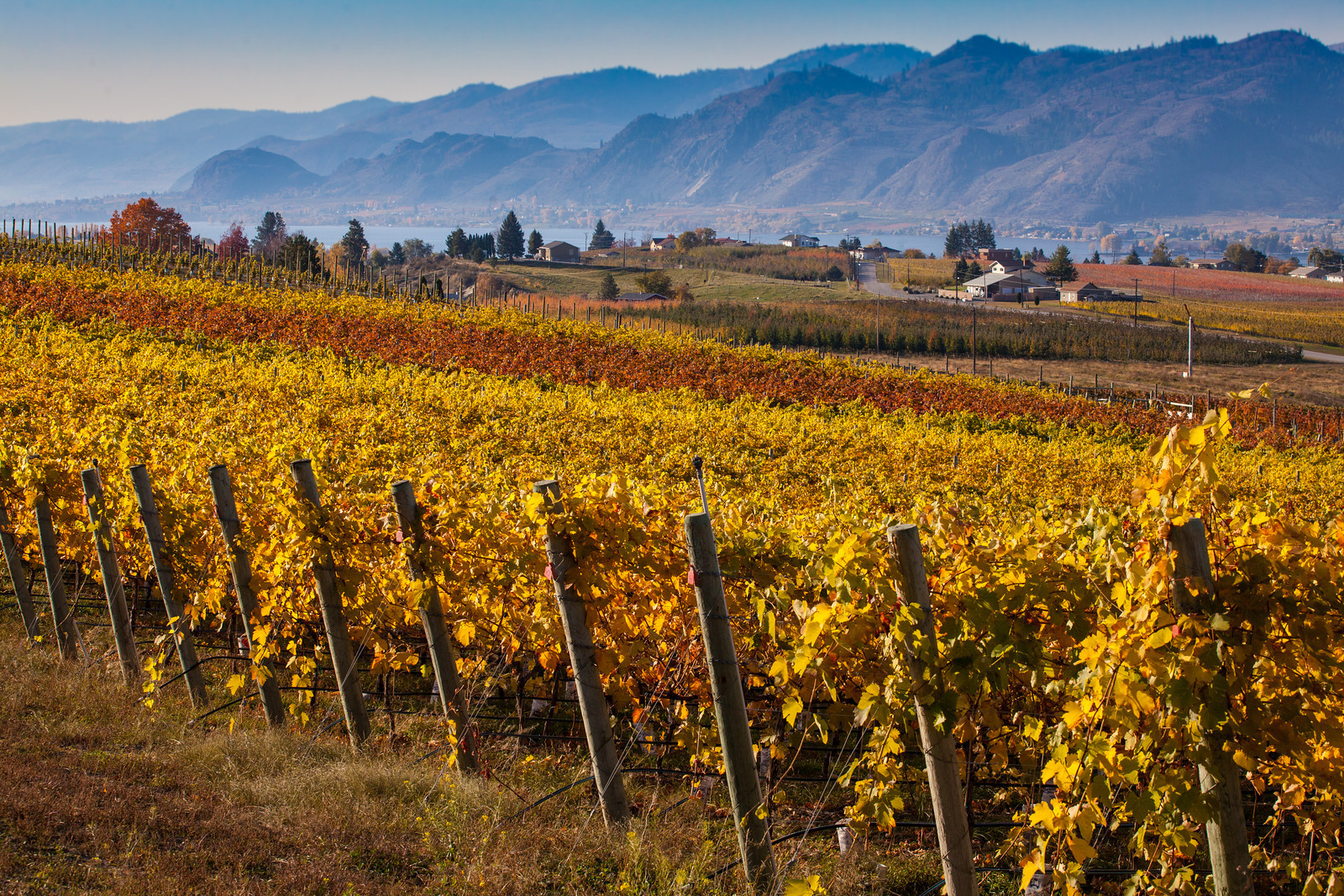 Several scenic hours later, we’re cruising back into town, past the quaint mom-and-pop motels of the Main Street strip. It hasn’t been an easy summer for Osoyoos, from COVID restrictions to July’s insufferable heatwave, to the wildfire that licked at its doorstep for more than six weeks before finally being contained in early September. But both Barclay and Zarowny’s businesses have survived, and even grown. Apparently I’m not the only one seeking moments of peace from soul-replenishing, open-air excursions.

As we pack up the RV and leisurely trundle home through Manning Park, the stunning reds, orange and yellows of the region’s fall foliage along the Crowsnest Highway lift my spirits even further and speak to seasons of change yet to come.