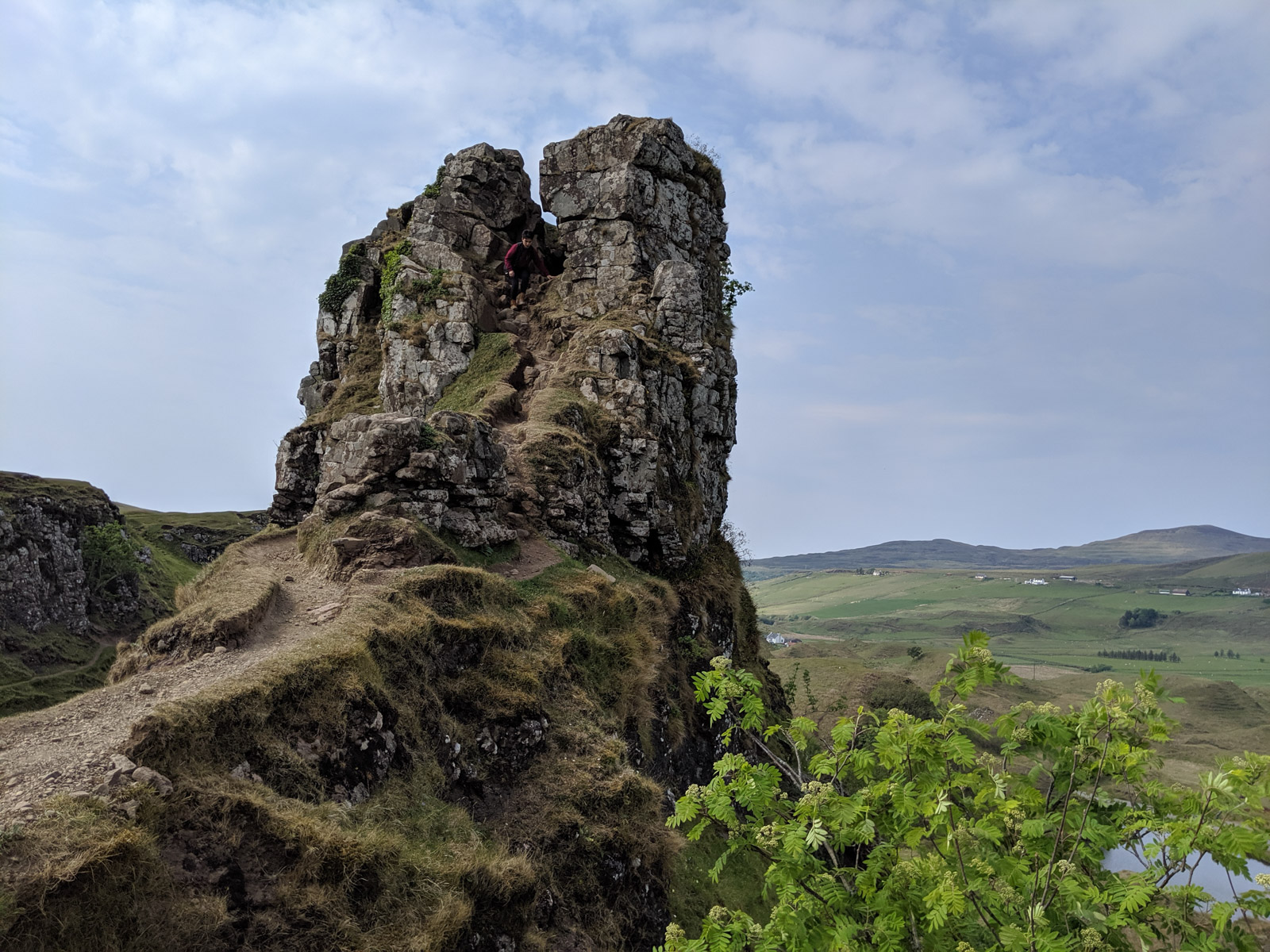 My dad was so excited about my sister Lindsey coming to visit me in Scotland, you would think he was taking the trip himself. If you need to rent a car, just let me know, he messaged. I’ve spoken to Amina, and she has a contact and directions. Dad was less interested that my sister was visiting Edinburgh for my 29th birthday, to then tour Glasgow, Inverness, Aberdeen, and Skye. He was more interested in the Ross Homestead⁠—off the beaten path, on the northern tip of Skye, far from any tourist attraction.

I was born in Aberdeen to Canadian parents, raised in Prince Edward Island, and arrived in Edinburgh in 2016 for a master’s degree. To me, home in Scotland was the Backhill of Goval in Aberdeen, where our family friends still live across from the house where my mother raised four under five. I’m not the sort to call myself intrinsically Scottish⁠—though a gaggle of my Ross ancestors ventured in the late 1700s from the Isle of Skye to the shores of Prince Edward Island.

My dad, on the other hand, loves heritage, history, and the Royal Family. He sends quips and links in our family group chat⁠—without context⁠—about UE Loyalists, the township of Kilmaluag, and the Highland Clearances. He’s a proud member of the Rosses of Skye Facebook group, where he and his “cousins” are in constant dialogue.

To my dad, Skye was our opportunity to touch history, even if history was a pile of blackened rocks in someone’s backyard. EWEN ROSS was born 1755 in Kilmuir, Skye,Scotland, and died 1798 in Egypt, Battle of the Nile! It was Ewen’s widow, Nancy, who would leave the homestead and journey to Canada, to be buried in Prince Edward Island at 48 years old. This is Ewen Ross’s home or was. It is still owned by a Ross! “This” was a red mark on a map that could only be found with the help of innocent locals. They will be able to point out the original ‘black’ house (ruin). “This” would be a three hour bus to a residential area to see some rocks. 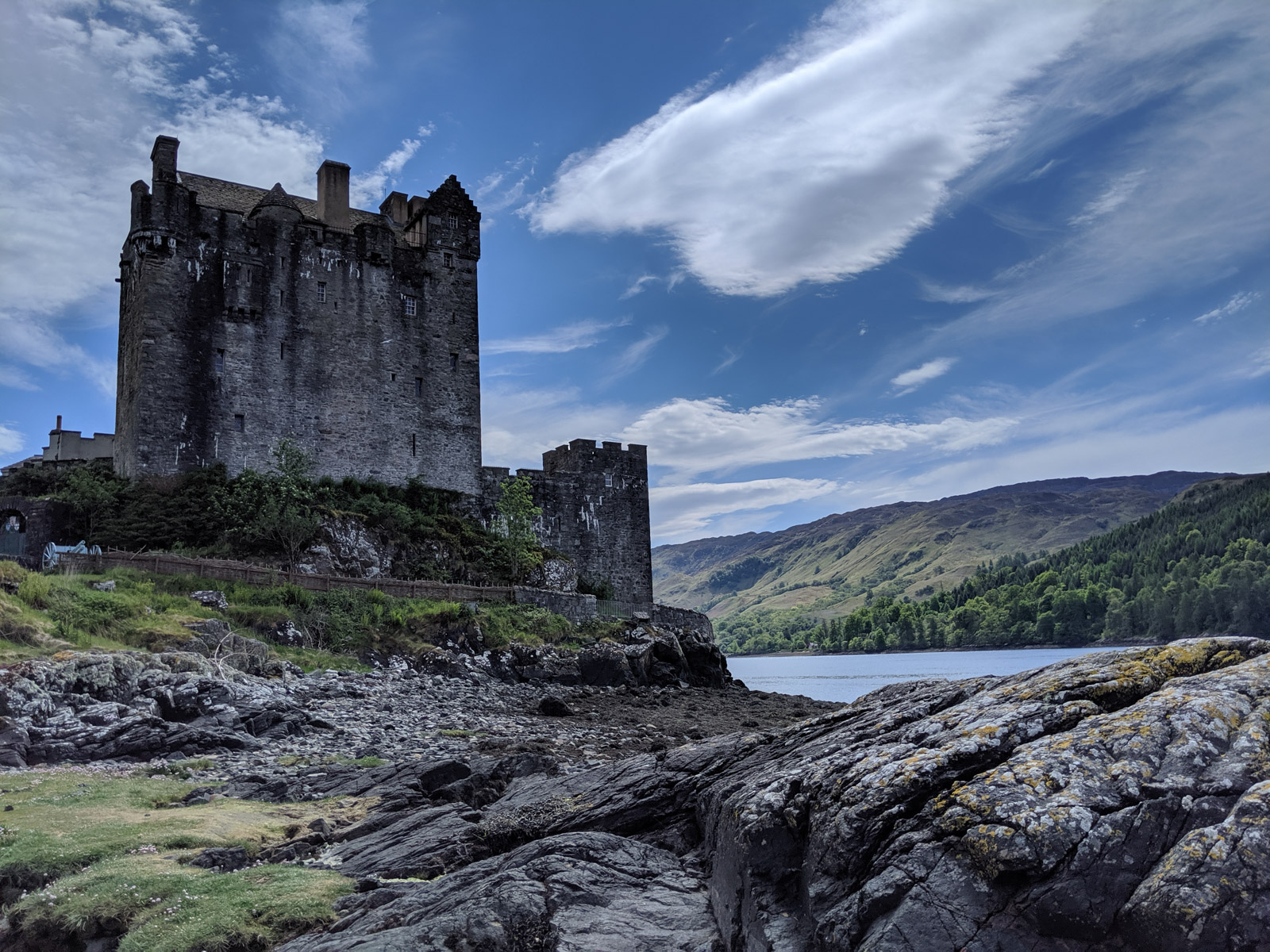 “I think we had a great debate about it, you and I,” Lindsey recalls. Though she’s always found our heritage interesting, she didn’t want it to interrupt our vacation. “So long as it was low effort I was in—but it was definitely one-thing-going-wrong away from just dropping it.” We set out, the vague notion of Kilmaluag in the back of our minds.

We started things off in Edinburgh, where I made sure to take Lindsey to my personal obsession: Arthur’s Seat, the ancient volcano turned hiking ground nestled next to Holyrood Palace. In a time crunch, it’s best to stick to the strictest route and head to the top, but if you’re in Edinburgh for a while, I’d recommend hitting a different route each day. Then, we headed down to iconic Leith. We hit Teuchters on the water for a Scottish must: traditional haggis, neeps, and tatties. Next, we took the one-hour train to Glasgow for a day trip, where we explored the Glasgow Botanic Gardens before board games and greasy vegan at the underground alt-bar the Flying Duck. 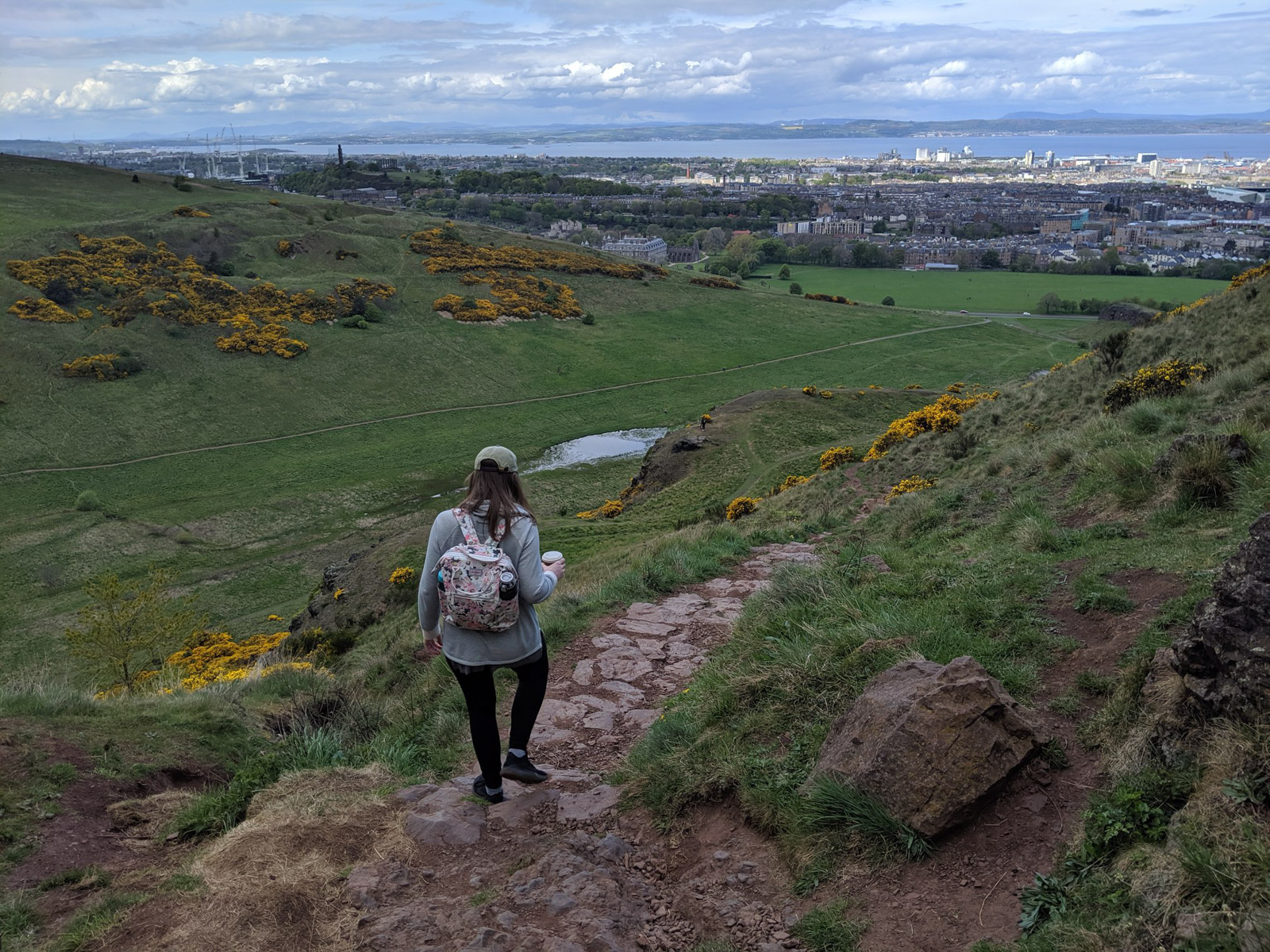 Our old family neighbour June gathered us at the Aberdeen Train station. Aberdeen has a bad reputation as a granite city, but Aberdeenshire is full of green, including Duthie Park: home ​​to one of Europe’s largest indoor gardens and to Lindsey’s Scottish childhood. “It was like reliving our childhood videos,” she says. Specifically, I recall three-year-old Lindsey dropping a turtle she shouldn’t have been holding. All the turtles were safe this visit.

June drove us to the Backhill of Goval where her mother-in-law, Celia, still lives. Lindsey was only four when we moved back to Canada, but she has a handful of memories. ”I used to go to her house, and I would go get a treat from a tin.” Not only did Celia still have the tin⁠—there were treats to be had.

We had one last pit stop, Nairn, before heading Skye-ward. I recommend a stroll down Nairn Beach, which overlooks the Moray Firth, and then grabbing an ice cream at James’s⁠—it has dairy-free options as well.

Finally, Skye was in our sights. We took the train to Kyle of Lochalsh, just shy of Skye, and then bussed over the Skye Bridge. We spent a night at an Airbnb and wandered picturesque Portree. Maybe the magic of Skye already infused us, maybe it was guilt, maybe it was Lindsey saying, “I felt sad thinking Dad might never experience this himself,” but suddenly the homestead was part of our journey. 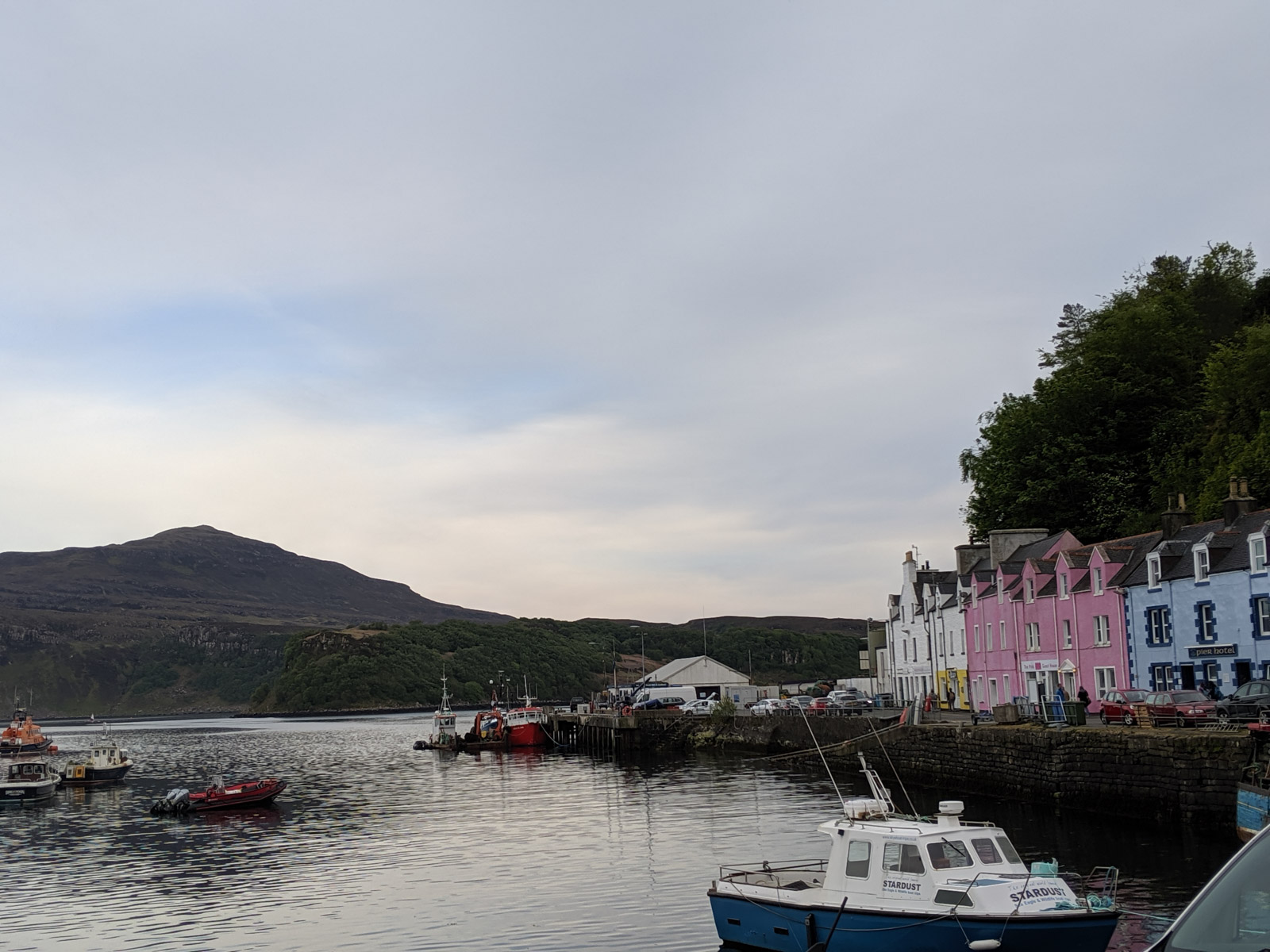 Those afraid to drive the coast of Skye, take comfort. There is a bus that loops the island, but you should book ahead and plan wisely as it comes round once every three hours. Our first drop off landed us at the foot of the Old Man of Storr, a hiking trail defined by its unusual rock formations and sweeping views. It takes the nimble an hour and 15 minutes, and two sisters taking lots of breaks and photos precisely three hours.

Being dropped off at the homestead was a bit trickier. “The bus driver was well aware that there were no tourist destinations where we were being dropped off,” Lindsey remembers with a laugh. “He said, ‘Am I just dropping you in the middle of nowhere? Are you going to be okay?’”

We were deposited, as the bus driver described, in a rural area with nothing except a niche café. Our father told us we had to find Callum’s house. A nice woman working at Single Track let us know she wasn’t open yet, and she was confused when we said we didn’t want coffee⁠—we were looking for a man.

Incidentally, Callum found us as we stupidly stood in his yard. We realized, taking in his expression, that neither our father or his friend Amina had told him we were coming. He just gathered himself and said, “I best have you in for tea.” Although Callum had the air of a man who usually left social niceties to his wife, he did one better: letting us fill our water bottles, feeding us biscuits, and giving us directions to the homestead and a graveyard down the way.

From Callum’s backyard, we could see the shape of the homestead in the distance. It was marked by nothing, no road leading to it, and we would have to make our best go of it. “I definitely felt like we were trespassing at times,” Lindsey remembers of walking through the fields and fences. When we finally came upon the homestead, we were shocked it resembled a house. Touching the stone, crawling through the roofless ruins, “It was beautiful,” Lindsey says, “to still see the shape of the house and see the view that they saw.”

We took a video for Dad. As much as we hemmed and hawed, Lindsey was right. Dad has had Parkinson’s for 20 years, and even with every transit miracle, he wouldn’t be able to come here on his own. Standing at the homestead, overlooking the rolling hills that lead to the Atlantic Ocean, we knew we had made the right choice. Callum had pointed out a graveyard in the distance that might house some relatives, and we made the lighthearted decision to go⁠⁠—not realizing we’d have to traverse rivers and paddocks to get to it. Several kilometres and lambs later, we discovered there were no Rosses, but a worthy view. 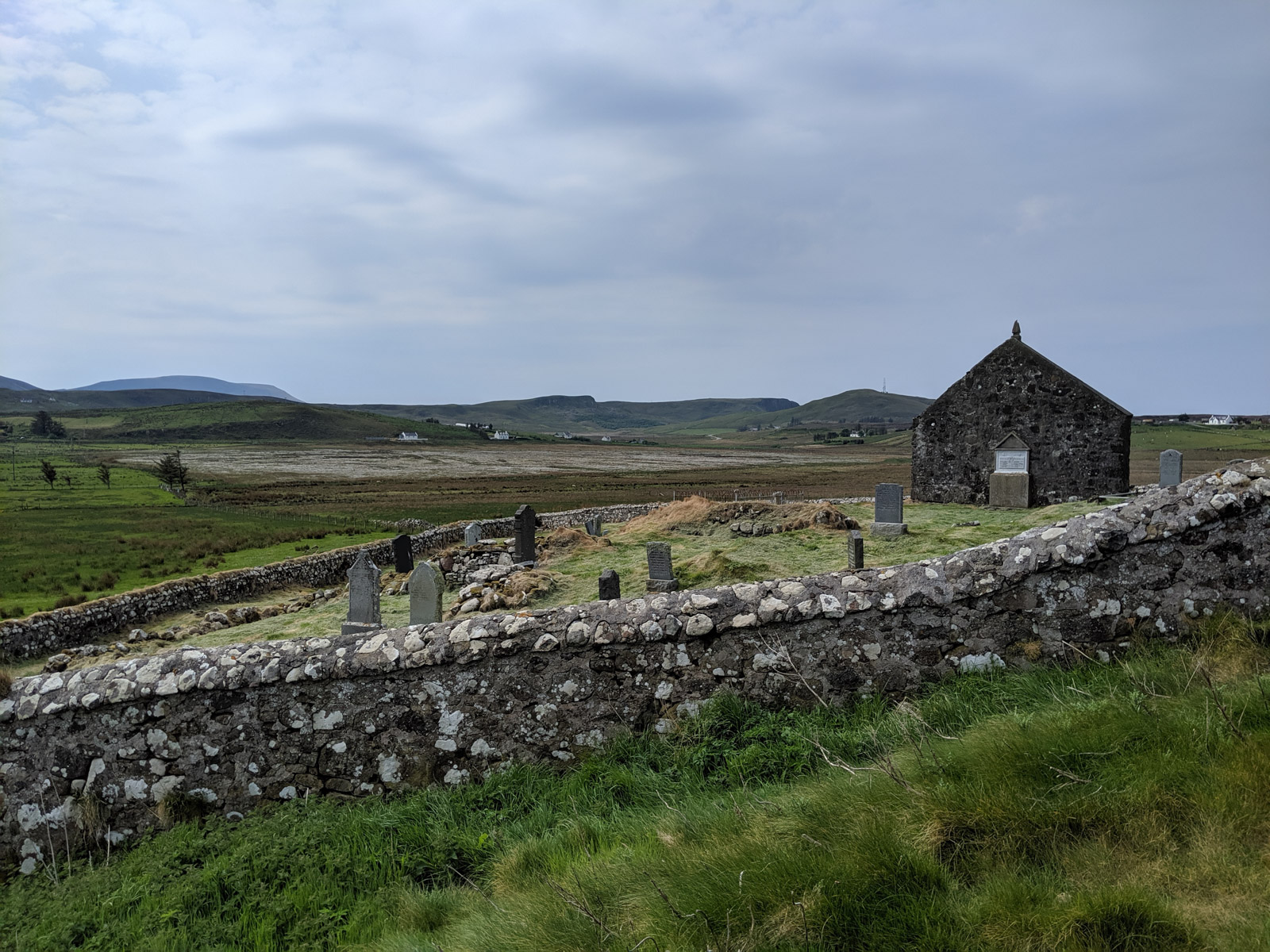 The rest of the trip was charmed. We grabbed our Single Track coffee before hopping aboard the bus at the three-hour mark (barely making it, as we did every time). We made one more stop at the hauntingly magical Fairy Glen, hitchhiking on our way back to the highway with friendly Americans so we could catch the last bus. We spent that night at a hostel in Broadford and the next day hitchhiked to Eilean Donan Castle before catching the train back to Edinburgh.

My dad and I may have different definitions of what makes a homestead. Lindsey, I think, has a blend of the two. Although we held it against our dad at first⁠—much like when your parents make you pose for the camera as a tween with a bride and groom or a busker⁠—we had to admit it was one of the best parts of the trip. “In retrospect,” Lindsey says, “that was kind of great.”