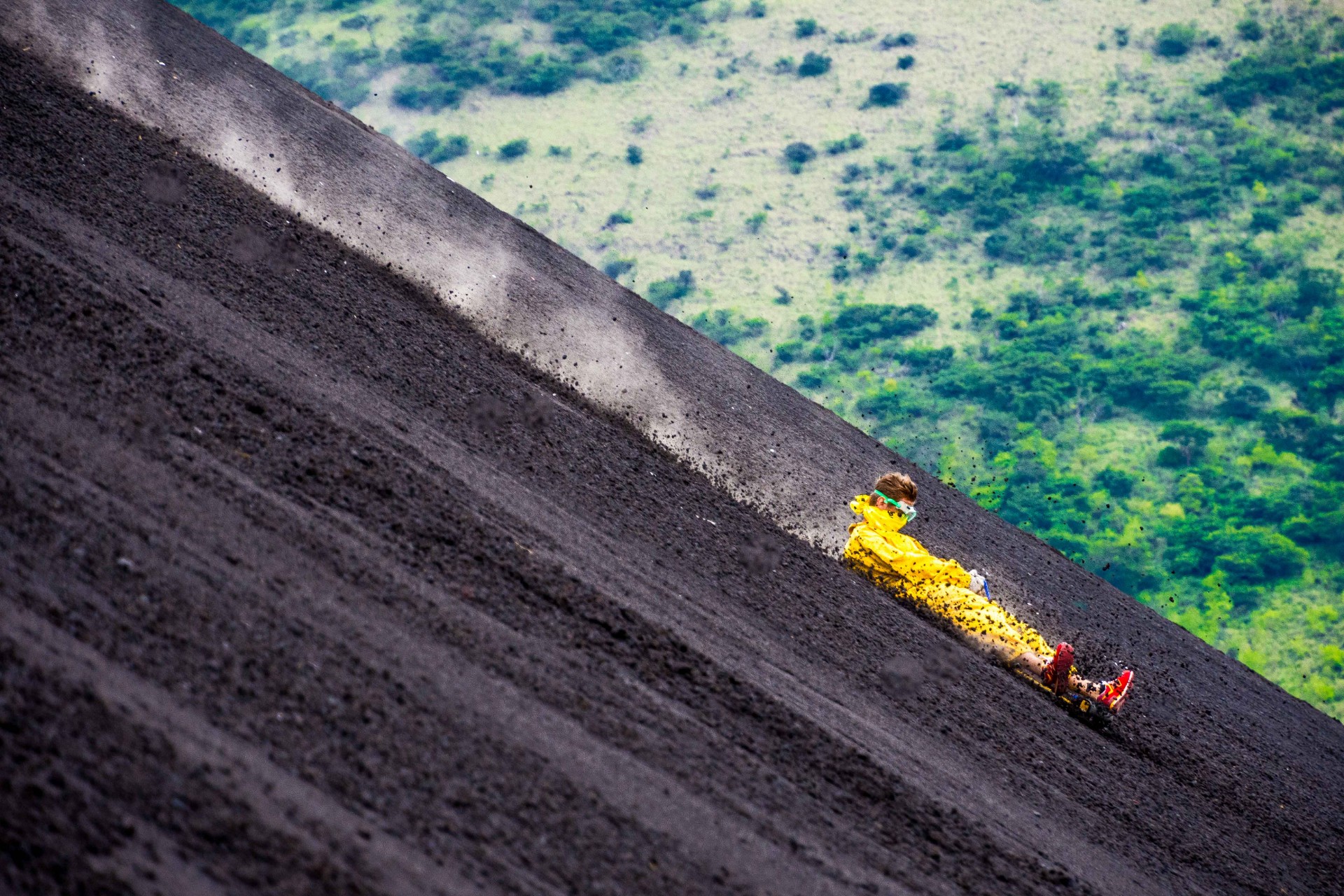 When, late in the summer of 1883, the Indonesian island of Krakatoa obliterated itself from the face of the Earth, it did so with a very big bang. Estimates vary as to exactly how many nuclear bombs you’d need to make a bang that big, but when you start measuring destruction in units of atomic weaponry, it’s enough to know that you’re talking about a very big bang indeed.

It was heard a thousand miles away and, along with the ensuing rushes of toxic gas, falling ash, and tsunamis, killed more than 30,000 people. More than 60 million years before that, the massive and prolonged eruptions that created the Deccan Traps lava beds in India released enough sulphur dioxide to change the climate for centuries and, some scientists think, kill the dinosaurs.

Volcanoes, in short, have significant planetary clout, and in many parts of the world, they are sacred ground. The ancient Greeks and Romans believed Mount Etna is home to the god of fire, and Indigenous Hawaiians feel a similar solemnity toward Mauna Kea.

No such holy superstitions, however, seem to surround Cerro Negro, a relatively young volcano in northern Nicaragua. 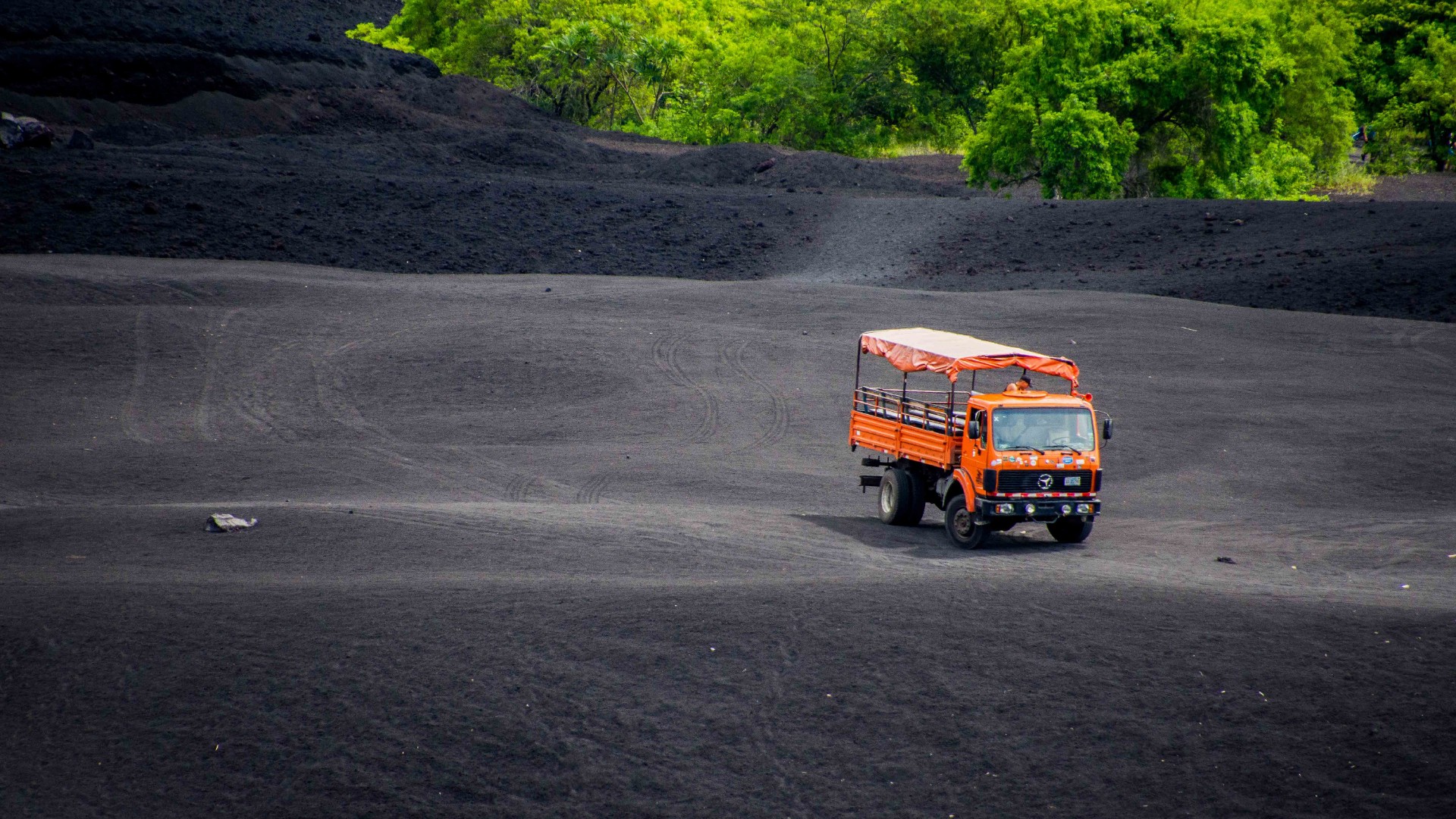 At less than a couple of hundred years of age, it’s a geological toddler, and every now and then, it has a bit of a tantrum, spewing fresh ejections of glowing rock far up into the air, which then rain down, starting fires, damaging cars, and quite possibly killing someone.

You might think it wise, then, to give her a bit of space. You know, stand back a bit, absorb her capricious beauty from a safe, polite distance. You could behold, perhaps, in quiet reverence, what a singular thing it is to witness the birth of a new piece of Planet Earth.

Or, you could stop being so square and go volcano boarding instead. 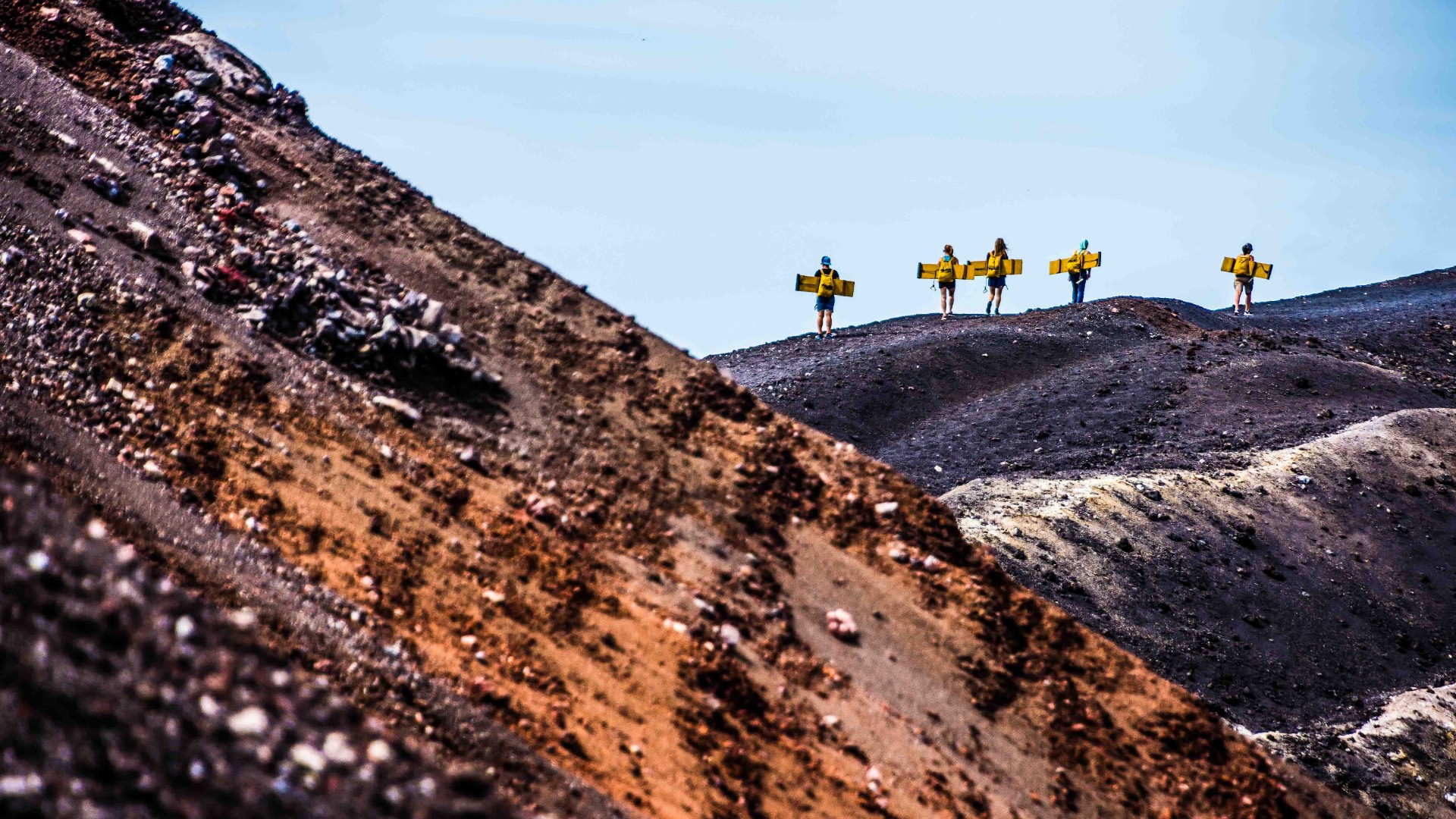 Welcome to one of the world’s youngest sports. Yes, they do call it a sport, which it is, in the same way that tobogganing is a sport.

Our trip starts in nearby León, an altogether beautiful city, where elegant colonial buildings brim with antiques and art collections, and the citizenry negotiate the sun-baked streets on horses and heirloom bicycles. The city’s been here since 1524 and so, it seems, have many of its buildings. If you were looking, shall we say, for a ready-made film set for an adaptation of a novel by Gabriel García Márquez, you might start here.

Loaded into the back of a flatbed truck, a dozen of us and a couple of guides bounced out of town through a tangled grid of rough roads and up into the hills.

Cerro Negro, or Black Hill, is a very black hill indeed, covered as it is by basalt cinder, the jet-black discharges typical of nascent volcanoes. Needless to say, it’s also very hot here: it was a searing, cloudless day, and as we climbed, the sun broiled and the slope fried.

For protection against the sharp rocks over which we were about to slide, we’d been given bright yellow coveralls, goggles, gloves, and balaclavas, all of which left us looking much more as if we might be at a British rave sometime in the early 1990s than atop an active volcano in the Nicaragua countryside.

But there we were. And we were ready, now, to get on our boards. 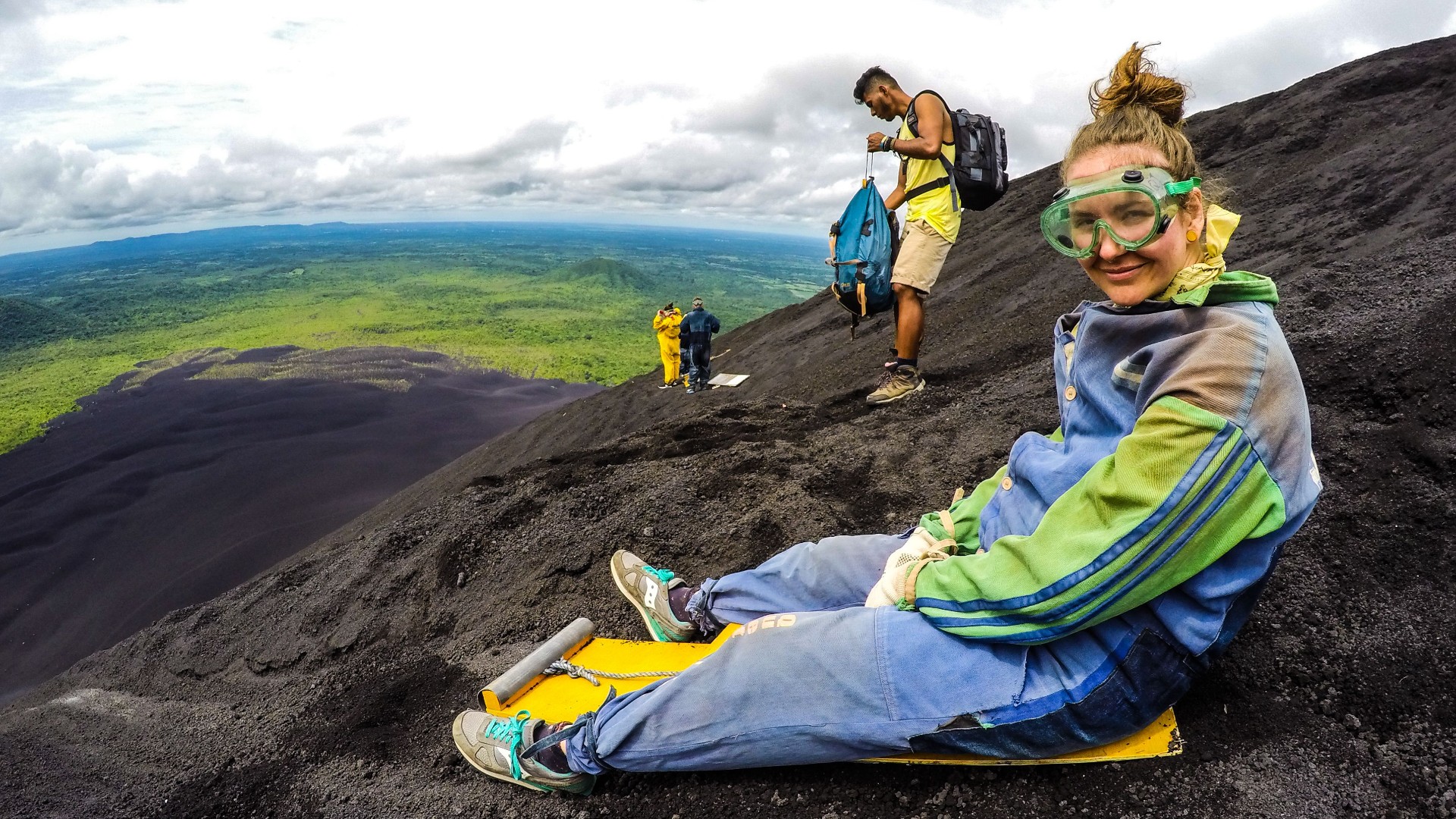 Attempting to ride standing, our guides told us—like the amateurs we were—would be a total waste of everyone’s time, and we were instead to sit down, put our left foot down to go left, right foot down to go right, lean back to go faster, and lean forward to stop.

These may sound like very simple instructions but their application, at least in my case, was far from simple. From the initial unexpected acceleration to the unpredictable give of the rocks and the constant lashings of hot debris, it was impossible to usefully apply any of the given directions at all.

Leaving my dignity uphill and barely staying on my board (and acknowledging, privately, that perhaps this really was a sport after all), I bounced and lurched down to an eventual jarring halt. 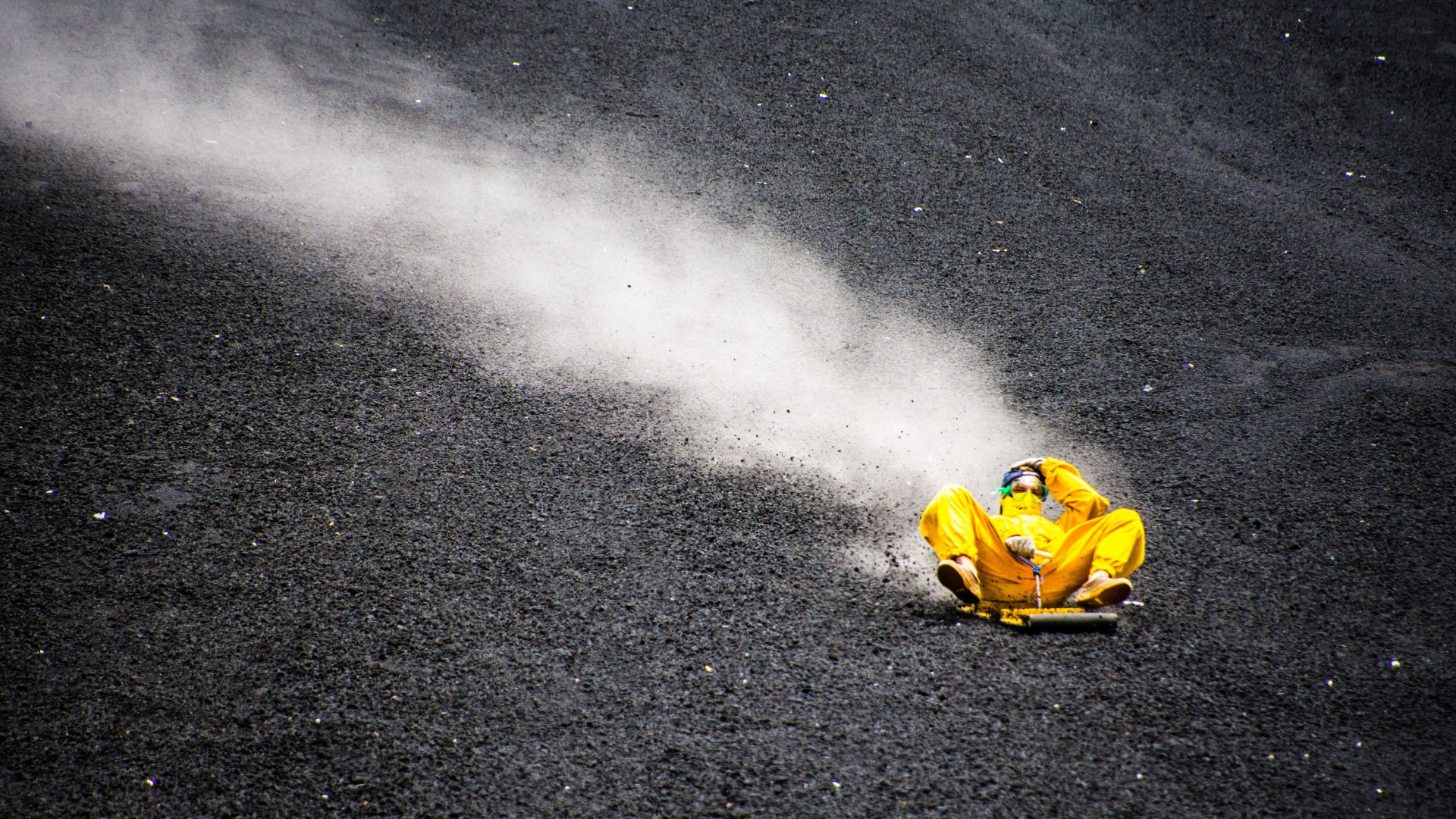 I turned to watch the others careening down the inky hillside. They looked like yellow smoke rockets, a billowing cloud of dust sweeping back from each of them like trails from falling flares.

It’s the kind of experience that gives you the giggles, that feeling you get when you’ve got your kicks doing something that’s really just for kids. Something a little naughty, perhaps, a little sacrilegious. Putting on a bright yellow suit and squealing while you hurtle down the side of an active volcano with cockeyed limbs and a mouthful of ash is not an act that evokes a great deal of respect.

Perhaps we should have been embarrassed. Possibly ashamed.

I wanted to go again.