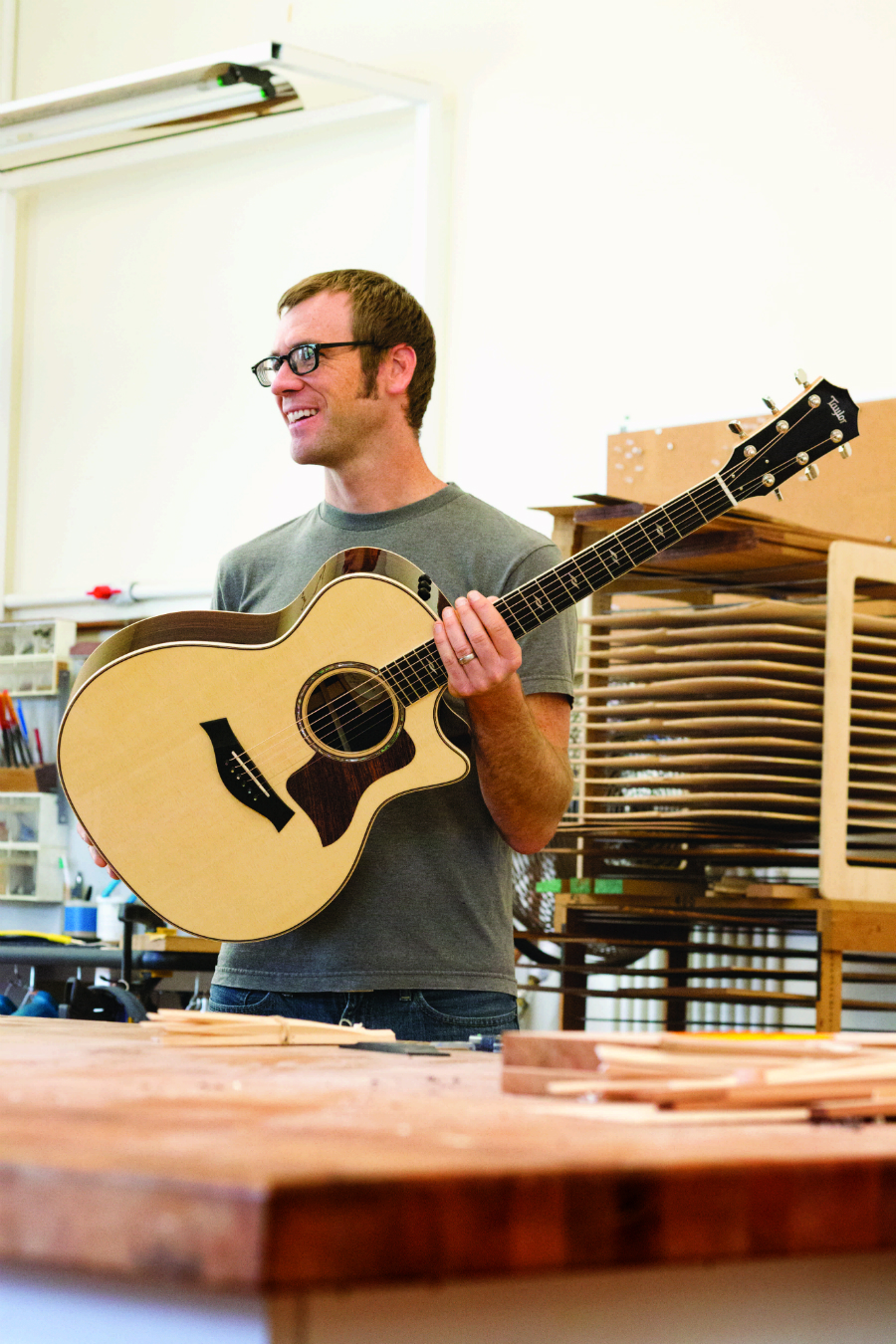 Andy Powers built his first guitar at the age of seven. “It blew up on the first note,” he says. He is speaking from his studio at Taylor Guitars, in the San Diego suburb of El Cajon, and clearly the memory still amuses him: “My second and third guitars didn’t last past the third or fourth note, either, but eventually I got better at it.” By age 10, people were already seeking him out to build something for them.

His parents were both “hobbyist musicians”, and his father was a carpenter, so young Powers was surrounded by both music and raw building materials from a young age; as such, his gravitation into making guitars was almost inevitable. He also began a journey into becoming a professional studio musician, on the piano at first, but the guitar soon ascended. He loved making guitars, too, but didn’t consider it as a career until a first break of sorts: “I was 20 years old,” he recalls. “I got a call from a friend, who told me to find the new issue of Rolling Stone magazine. And right in there was a two-page story about Elvis Costello recording with Emmylou Harris. And Elvis is posing with a ukulele I had made. I had placed it in a friend’s pawn shop, and Elvis came in one day, played a few instruments, and bought the uke. So, at that moment, looking at that photo, I realized building instruments could be a real job, not just a personal obsession.” He certainly made good on that realization.

Powers made instruments for many years, usually specially-commissioned pieces. The technical term for his craft is “luthier,” and Powers is one of the most admired and respected in the world. Today, he is the master guitar designer at world-renowned Taylor Guitars, while still maintaining his Andy Powers Instrument company for special ventures. His early career was all one-on-one projects, working directly with each musician. “Each one is unique,” says Powers, who will be speaking at the Vancouver International Guitar Festival (June 23 to 25, 2017). “I only wish I could have made a guitar for Django Reinhardt!” At Taylor, “the scale of production means I focus on design, so a guitar can be made at the same high quality hundreds of times.” His first notable success with Taylor was to redesign a big-body guitar; the Grand Orchestra is the result, an instant classic in the company’s legendary lineup.

The most important part of any guitar is the wood it is made of, and Powers is deeply passionate about the material. “It is a lot like an ancient spice trader, or a forager from millennia ago,” he explains. “Different types of wood are used for different parts of the instrument, so you basically forage the different woods, and consider the personality of each, and create an expressive musical whole from that.” It is a recipe of sorts for Powers, who finds instrument-quality woods from such widely diverse places as Kenya, and Skagit Valley in Washington State, where a specific type of curly maple is grown. The challenge is to understand the character of the different woods, and then “coax them to perform together at the highest level.”

The desired qualities in fine guitars are sustain (length of note); volume; and projection, which is determined by the balance between flexibility and rigidity in the various parts of the instrument. Listening to Powers describe the intricacies of all this is to take part in a kind of graduate seminar on how sound is created. For a guitar, the strings on the fretboard create vibrations that bounce into its body, and are then bounced back out as musical notes. It is about both purity and accessibility. “I strive to make instruments that are a gratifying experience for all levels of musicians,” says Powers. “Music is way too important to leave only to the professionals.” Science, nature, craftsmanship, passion. It sure sounds good.