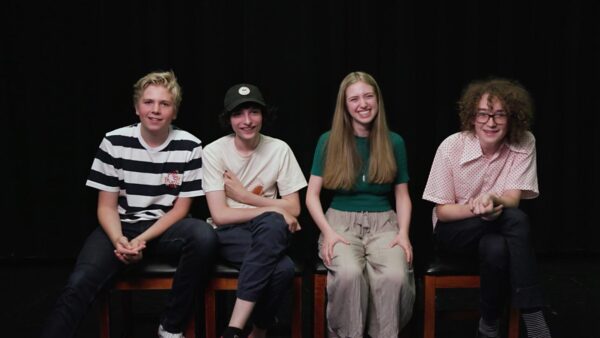 The four members of Vancouver-based indie rock band Calpurnia walk into the Commodore Ballroom on a weekday afternoon with looks of awe. It’s their first time inside the venue—not because they wouldn’t be able to sell it out, but because these young musicians aren’t of legal drinking age. And for that matter, neither are most of their fans.

Created in 2017 after singer-guitarist Finn Wolfhard (an actor known for his roles in Stranger Things and It) and drummer Malcolm Craig met on the set of a music video for Toronto punk rock band Pup, Calpurnia is also comprised of lead guitarist Ayla Tesler-Mabe and bassist Jack Anderson. Once they got comfortable with each other through jam sessions and cover songs, the band began to write their own music, and released their debut EP, Scout, on Royal Mountain Records in 2018.

In “Greyhound,” Wolfhard sings about how he’s “going to Seattle on the Greyhound/I missed school for this,” to go to a show at the city’s famed Neptune theatre. Little could Calpurnia have known that in the summer of 2018, they would be performing that very song on stage at the Neptune. Indeed, it’s been a fast rise for this foursome, with shows at the likes of Vancouver’s Vogue Theatre and Toronto’s The Phoneix, not to mention two dates in Japan and an appearance on Jimmy Kimmel Live. Pretty good for a group of teenagers.

Full of relatable heart, Calpurnia’s catchy songs are refreshingly un-precocious; they are perfectly of-age, encapsulating a time in their lives that they will undoubtedly never forget. In the launch of our new video series The Last Word, the band dives into the last records they bought, the last time they wrote a song, and more.